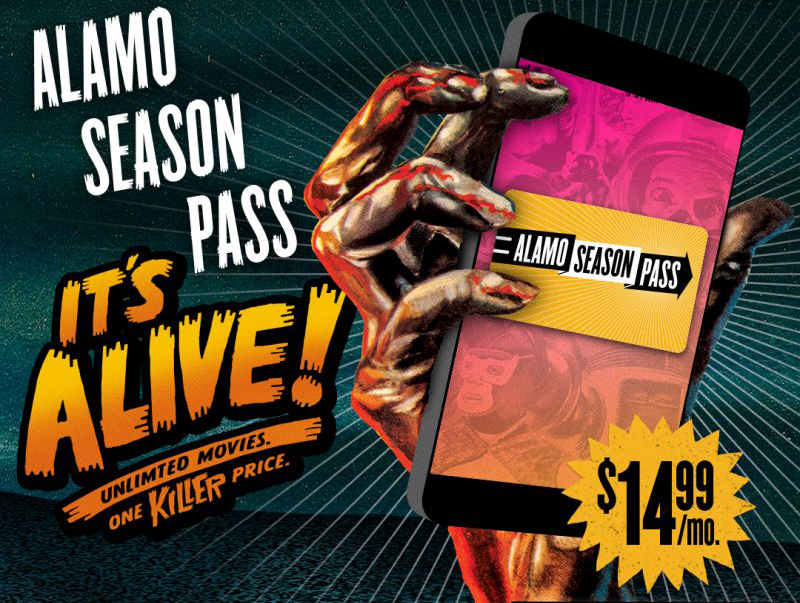 The long-awaited monthly subscription program is now in use at all 41 Alamo Drafthouse theaters across the country giving subscribers access to the largest variety of moviegoing options in the industry.

Alamo Drafthouse Cinema is proud to announce that their hotly-awaited Season Pass program is now in use at all 41 locations across the country. Season Pass is the only subscription program that allows guests to have the Alamo Drafthouse cinematic experience every single day, all for one low monthly fee. The membership provides one regularly priced ticket per day, with reservations available up to seven days in advance.

Alamo Season Pass grants access to the widest selection of films in the cinema industry, including blockbusters, independent and arthouse releases, and classic repertory screenings. Last year Alamo Drafthouse locations screened over 2,100 different titles, nearly double the variety of the second-highest number amongst exhibitors. Recent films that have been particularly popular with Season Pass users include “Birds of Prey”, “Doctor Sleep”, “Parasite”, “The Lodge” and “Color Out Of Space”.

“This is a huge win for movie lovers,” says Tim League, Alamo Drafthouse founder and CEO. “The entire reason we opened the Alamo in the first place was to share the movies we love with as many people as possible, and Season Pass is the perfect means for folks to explore more and more films.”

Season Pass is available for instant sign-up and immediate use in New York City, San Francisco, Los Angeles, Austin, Denver, Phoenix, Raleigh, San Antonio, Kansas City, Yonkers, Springfield, and New Braunfels. In select regions, memberships are available via a waiting list, but all locations are expected to be open for everyone in the coming months.

Season Pass subscriptions renew monthly, with no annual commitment. Pricing varies by location and corresponds to each Alamo Drafthouse location’s average ticket pricing, with pricing ranging from $14.99 to $29.99 per month in big cities like Los Angeles and New York. The membership also works for screenings in 3D, 70mm, Dolby Atmos, and The Big Show premium large format, with a $1.99 surcharge per ticket. Members with accompanying friends and family members can always purchase additional regular-priced tickets at the same time, or they can add up to four Extra Seats – similar to “Plus Ones” – to their monthly Alamo Season Pass subscription at a discounted price.

The Season Pass subscription model was created and refined for more than a year through a combination of data and closely monitoring guest feedback. The goal – building a sustainable program that enables subscribers to see as many movies as possible.

About Alamo Drafthouse
Alamo Drafthouse Cinema was founded in 1997 as a single-screen mom and pop repertory theater in Austin, TX. Twenty-three years later, with 41 locations and counting, Alamo Drafthouse has been called “the best theater in America” by Entertainment Weekly and “the best theater in the world” by Wired. Alamo Drafthouse has built a reputation as a movie lover’s oasis not only by combining food and drink service with the movie-going experience, but also introducing unique programming and high-profile, star-studded special events. Alamo Drafthouse created Fantastic Fest, a world renowned film festival dubbed “The Geek Telluride” by Variety. Fantastic Fest showcases eight days of genre cinema from independents, international filmmakers and major Hollywood studios. Alamo Drafthouse’s collectible art gallery, Mondo, offers breathtaking, original products featuring designs from world-famous artists based on licenses for popular TV and Movie properties including Star Wars, Star Trek & Universal Monsters. Alamo Drafthouse continues to expand its brand in new and exciting ways, including Birth.Movies.Death., an entertainment content platform for movie lovers, and the American Genre Film Archive, a non-profit film archive dedicated to preserving, restoring and sharing film.