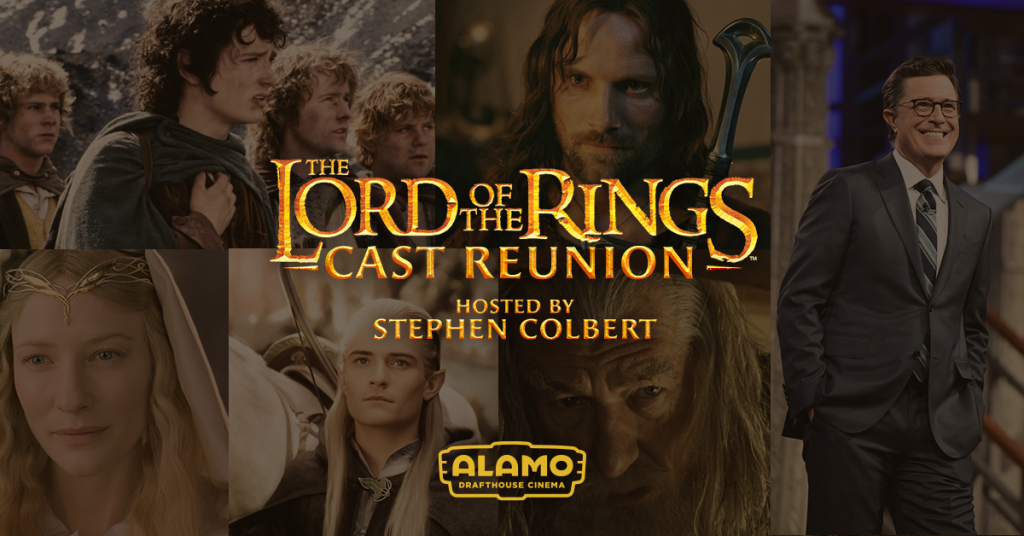 One ring to rule them all… and two decades later, three incredible chances to support local cinemas at “The Lord of the Rings” Cast Reunion.

A full year after the world changed, Alamo Drafthouse Cinema is bringing together Middle-earth’s finest to celebrate and support local cinemas across the world. For three consecutive weeks beginning March 25th with “The Fellowship of the Ring”, cast members from the cast of “The Lord of the Rings” trilogy will come together for conversations celebrating the 20th anniversary of these monumental films. Participating talents include Sean Astin, Cate Blanchett, Orlando Bloom, Billy Boyd, Peter Jackson, Ian McKellen, Dominic Monaghan, Viggo Mortensen, Andy Serkis, Liv Tyler, and Elijah Wood. Each will be moderated by Stephen Colbert, host of The Late Show on CBS and a noted “Ring Nut.” Fans can submit questions for the assembled panel through March 10th using #LOTR20 on Twitter.

“One of the experiences I miss most during this last year, beyond getting to hug my friends and travel, is sitting in a dark movie theater eagerly anticipating a new cinematic experience,” says Elijah Wood, who led the charge in assembling the cast and crew. “When Tim [League] reached out with the idea that we could band together to bring some much needed support to independent theaters across the globe, I jumped at the chance to help.”

The reunion Q&A content will be initially exclusively to theatrical screenings of the new 4K remastering of “The Lord of the Rings” Trilogy. As part of their new “Support Local Cinemas” campaign, Alamo Drafthouse is making these Q&A presentations available for all theaters around the globe entirely for free.

“We are extremely confident that post-COVID, the pent up demand for the magic of moviegoing will be very strong and the industry will return and flourish,” says Tim League, Alamo Drafthouse Founder and Executive Chairman. “In the meantime we’re grateful to Peter Jackson, the gracious participating cast members, and Stephen Colbert for participating in these very special events and letting fans experience these incredible films on the big screen in safe, open theaters.”

As vaccination levels rise across the country, Alamo Drafthouse will continue to offer one-of-a-kind special events like “The Lord of the Rings” Cast Reunion as a ‘welcome back’ for guests to safely return to their local movie theaters. Future events – cast reunions, director interviews and commentaries, and behind-the-scenes looks at iconic films – will be produced by Alamo Drafthouse and made available for free to any cinema in the world.

Operating during the COVID era has been an immense challenge for all theaters – and will continue even once the industry and the world has returned to a sense of ‘normalcy.’ After reopening last August, Alamo Drafthouse reinvented its entire operating model to create the safest possible gathering place outside the home – safer than supermarkets, bars, and restaurants – featuring dramatically enhanced safety protocols, HVAC upgrades, and state-of-the-art technology.

Through the end of April, “The Lord of the Rings” Cast Reunion will also be available as Your Own Private Alamobookings, Alamo Drafthouse’s innovative ‘personal theater’ option where guests can quickly and easily reserve a showing for their family and friends. Additionally, for fans who are unable to make it out to a theater safely at this time, the reunion conversations will later be made available online.

Cinemas that would like access to “The Lord of the Rings” Cast Reunion content should book the films through Warner Bros and then contact the Alamo Drafthouse creative team through the form on this page for additional instructions.

About Alamo Drafthouse
Alamo Drafthouse Cinema was founded in 1997 as a single-screen mom and pop repertory theater in Austin, TX. Twenty-three years later, with 41 locations and counting, Alamo Drafthouse has been called “the best theater in America” by Entertainment Weekly and “the best theater in the world” by Wired. Alamo Drafthouse has built a reputation as a movie lover’s oasis not only by combining food and drink service with the movie-going experience, but also introducing unique programming and high-profile, star-studded special events. Alamo Drafthouse created Fantastic Fest, a world-renowned film festival dubbed “The Geek Telluride” by Variety. Fantastic Fest showcases eight days of genre cinema from independents, international filmmakers, and major Hollywood studios. Alamo Drafthouse’s collectible art gallery, Mondo, offers breathtaking, original products featuring designs from world-famous artists based on licenses for popular TV and movie properties including Star Wars, Star Trek & Universal Monsters. Alamo Drafthouse continues to expand its brand in new and exciting ways, including the American Genre Film Archive, a non-profit film archive dedicated to preserving, restoring and sharing film, and Alamo On Demand, a new VOD platform boasting a growing and carefully curated library of entertainment for rental or purchase.