We’ve been here before. Ninety-three years ago to be precise.

The announcement by Warner Bros. Pictures Group that it will make its major titles for 2021 available simultaneously for a month in both cinemas and on its HBO Max streaming platform is rightly seen as a watershed moment for theatrical exhibition. In the next few days we will see many obituaries written about the ‘death of cinema’. Don’t believe a word of it.

It cannot have escaped anyone’s notice that Hollywood, along with the rest of this planet, is living through unprecedented times. You can argue that we should have seen most of what has happened coming. Heck, Warner Bros. Pictures released a little film in 2011 called “Contagion” that anticipated most of what has been taking place over the last 10 months, so much so that you might want to stencil on your window to the world, “Directed by Steven Soderbergh / Distributed by Warner Bros.”

Except there is no window, as Warner Bros. just smashed the theatrical release window. Or to paraphrase “The Matrix” (another Warner Bros. release), “Do not try and bend the window. That’s impossible. Instead, only realize the truth… THERE IS NO WINDOW. Then you will see that it is not the window that bends, it is yourself.” In this case it is cinemas that have to bend to the new reality.

There have been talks about whether the theatrical release window should be three months (exhibitor’s preference), 17-days (AMC’s deal with Universal), 30-days (Universal Picture’s deal with Cinemark and Cineplex for blockbusters that open to more than USD $50 million), or two-to-four weeks (Netflix’s usual pre-release theatrical window). But in the end it was not possible to bend the window to everyone’s satisfaction, so it shattered. Cinema operators and industry pundits are left to pick through the pieces and try not to cut or stab themselves while they do so. 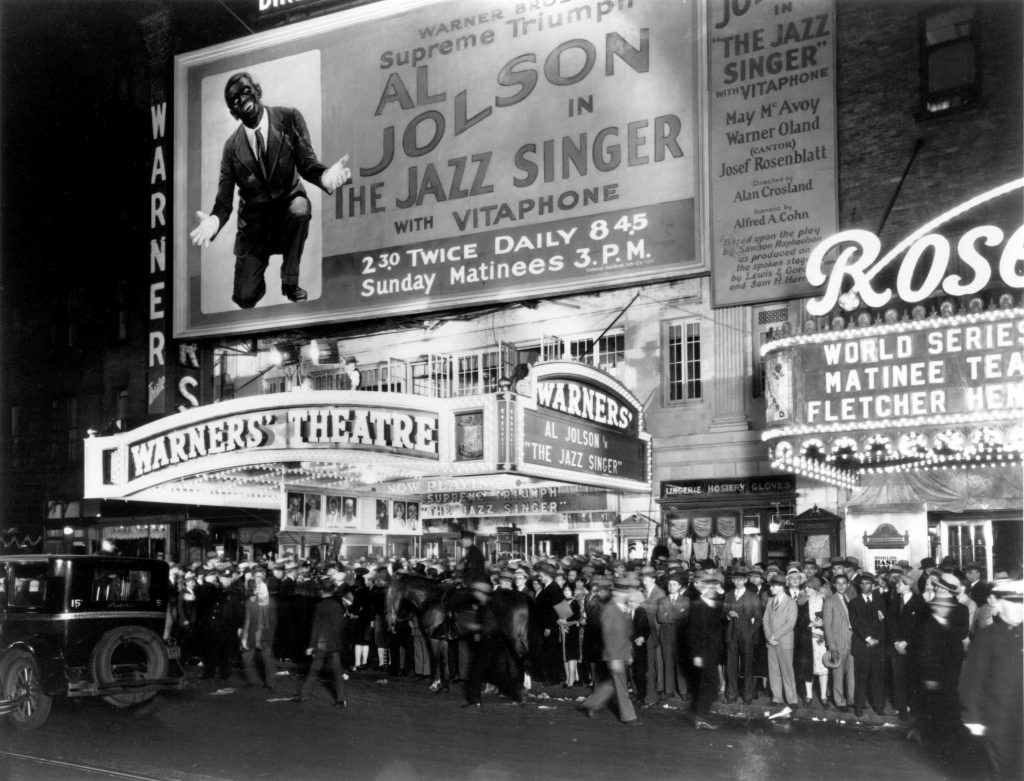 The premiere of “The Jazz Singer” was held at Warner Bros.’ flagship theatre in New York on October 6, 1927.

We were in almost this exact situation nearly a century ago and there are important learnings to be had from history, not least as it was Warner Bros. that then and now was responsible for reshaping the cinema industry. Or rather, were, because back in 1927, long before AT&T became the owner of WarnerMedia, it was really Warner brothers, four to be precise, Harry, Albert, Sam and Jack. The four Warners, led by Sam, widely considered the technical genius of the family, staked everything they had on a talking picture called “The Jazz Singer.” This despite the fact that the previous year their film “Don Juan,” with its synchronised music and sound effects, did not revolutionize anything, least of all box office earnings.

But in partnership with Western Electric (a wholly owned subsidiary of AT&T for most of its existence – a coincidence eh?) Warner Bros. launched the Vitaphone system that streamed actors’ voices to a cinema audience that had come to appreciate hearing performers directly through their home entertainment systems (radio and gramophones) and was ready to embrace change. It is well known that the “talkies” were the career death of many silent film actors, whose squeaky or accented voices did not match their handsome looks – as captured to great effect in the MGM musical classic “Singin’ in the Rain” – available from Warner Home Video.

What is often forgotten is that “The Jazz Singer” also upended the cinema (theatrical exhibition) industry and killed a swathe of movie houses. Pre-talkies cinemas were often small shop-front operations seating 99 people (to evade fire safety regulations), someone to crank the projector and a piano plus a piano player. These mom and pop cinemas could not afford to upgrade to Vitaphone sound any more than a surviving mom and pop cinema could afford to switch to digital projection 80 years later. As Michael Freedland (author of the definitive biography of the freres Warner) noted in the Guardian on the 90th anniversary of the release of “The Jazz Singer”:

Cinemas all over the world closed their doors because their owners couldn’t afford the new equipment. Everywhere, piano players were fired. (No cinema had been without a musician in front of the screen, playing fast for a race across the western plains, and soft and smoochy for the inevitable love scenes.)

No one now wanted the people who wrote the “titles”. The theatre closures meant no work for the men who had turned the handles or controlled the reels for the old-fashioned projectors – to say nothing of those cleaners.

In their place came the picture palaces that could seat hundreds or even thousands. The Hollywood Pacific Theater in Los Angeles was going to be purpose built for the opening of The Jazz Singer, but building work overran and it had to open in New York instead. Sam Warner died the day before the film opened – and his ghost is said to haunt The Pacific. While the cinema didn’t revolutionize sound, it was home to ETC’s Digital Cinema Lab that ushered in the switch from analogue 35mm print to digital projection. Sam Warner would have approved. 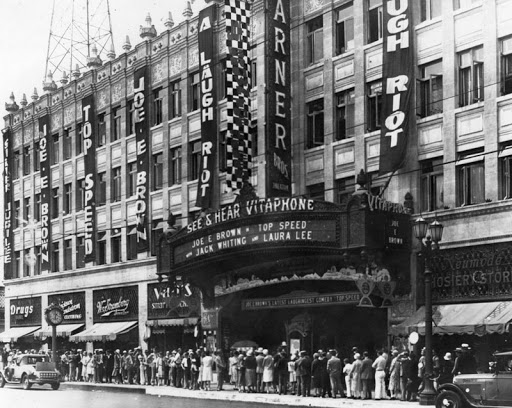 Located in the heart of Hollywood, the Warner Hollywood Theatre opened on April 26, 1928 and featured the studio’s early Vitaphone talking movies.

Today we can bracket “The Jazz Singer” next to “Wonder Woman 1984” as two films that in their own way will have changed the cinema industry irrevocably. But it is important to remember that both were harbingers of change that had been coming for years. Hollywood was already undergoing a revolution with 20th Century Fox bought by Disney and Netflix taking its place amongst the MPA elite of Hollywood studios. The pundits have for years played the parlour game of when will a streamer win the Best Picture Oscar (answer: last year, when “Green Book”, co-financed by a Chinese streaming platform, won). And Universal and Disney were already busy demolishing the release windows with “Trolls World Tour” and “Mulan,” while Warner Bros. was still flying the flag for the theatrical release with “Tenet”, even as all the other studios took their films and ran for the 2021 hills.

There are many unknowns still surrounding the details of the Warner Bros. strategy, too many to go into here: what will happen to box office reporting, particularly when it is linked to deals for the films creatives? What will happen to the studio’s films in territories where HBO Max has not launched? Has anyone thought about the risk that piracy poses when pristine HD copies are made available day-and-date? Will international releases now always come before domestic? We’ll explore these questions and more in an upcoming post. In the meantime, while some see this as Warner Bros. going for “the nuclear option” when it comes to streaming, it is not quite the Doomsday Machine for cinemas as popularized by “Dr Strangelove” (another Warner Home Video release).

The thing to realise is that these are unprecedented times and for now Warner Bros. is conducting a year-long experiment for 2021. “[T]his was the best way for WarnerMedia’s motion picture business to navigate the next 12 months,” [emphasis added] said Jason Kilar, CEO Warner Media, in the official press statement. Disney also experimented with PVoD for “Mulan,” trying to charge $30 on top of the Disney+ subscription, before reverting to the same SVoD release model for Pixar’s “Soul” that it had done earlier for “Hamilton,” all within the space of just six months! Whoever says they know what 2022 will be like is fooling themselves and anyone that listens to them, because the only thing we can say right now is that 2021 will be nothing like 2019.

The Warner Bros/HBO Max deal is the long, long, long-awaited triumph of pragmatism. It gets big films back into cinemas where they belong, while finally admitting 2021 is not going to be 2019 again – or even close. Now watch the scramble to catch up.

It is a business mantra repeated ad nauseam lately that the COVID pandemic has not so much changed society as accelerated existing trends, whether it is mRNA vaccine development, online retail, or Zoom meetings and webinars instead of conferences and trade shows. So too it is with streaming of films. Will it kill cinemas? It seems that the rise of Uber Eats has not diminished people’s appetite for going back to the restaurants, once out of lockdown, any more than microwavable frozen food did before it.

What day-and-date releases will hopefully kill is bad cinema experiences. Even before COVID people were prepared to pay good money to watch a film like “Roma” or “The Irishman” on the big screen in the comfortable surroundings of an Everyman or Curzon cinema in the United Kingdom. This year Netflix has become the biggest distributor of theatrical releases amongst all the Hollywood majors. There will still be people who will want to see “The Batman” and “Dune” on an IMAX screen, rather than on their phone.

Cinema will change, because that is how it has survived for the last 125 years. It is worth remembering the apocryphal line from “The Leopard” (both the book and Visconti film adaptation), that “if we want things to stay as they are, things will have to change.” And change they will for cinemas. It just happened to be Warner Bros that changed it – again.