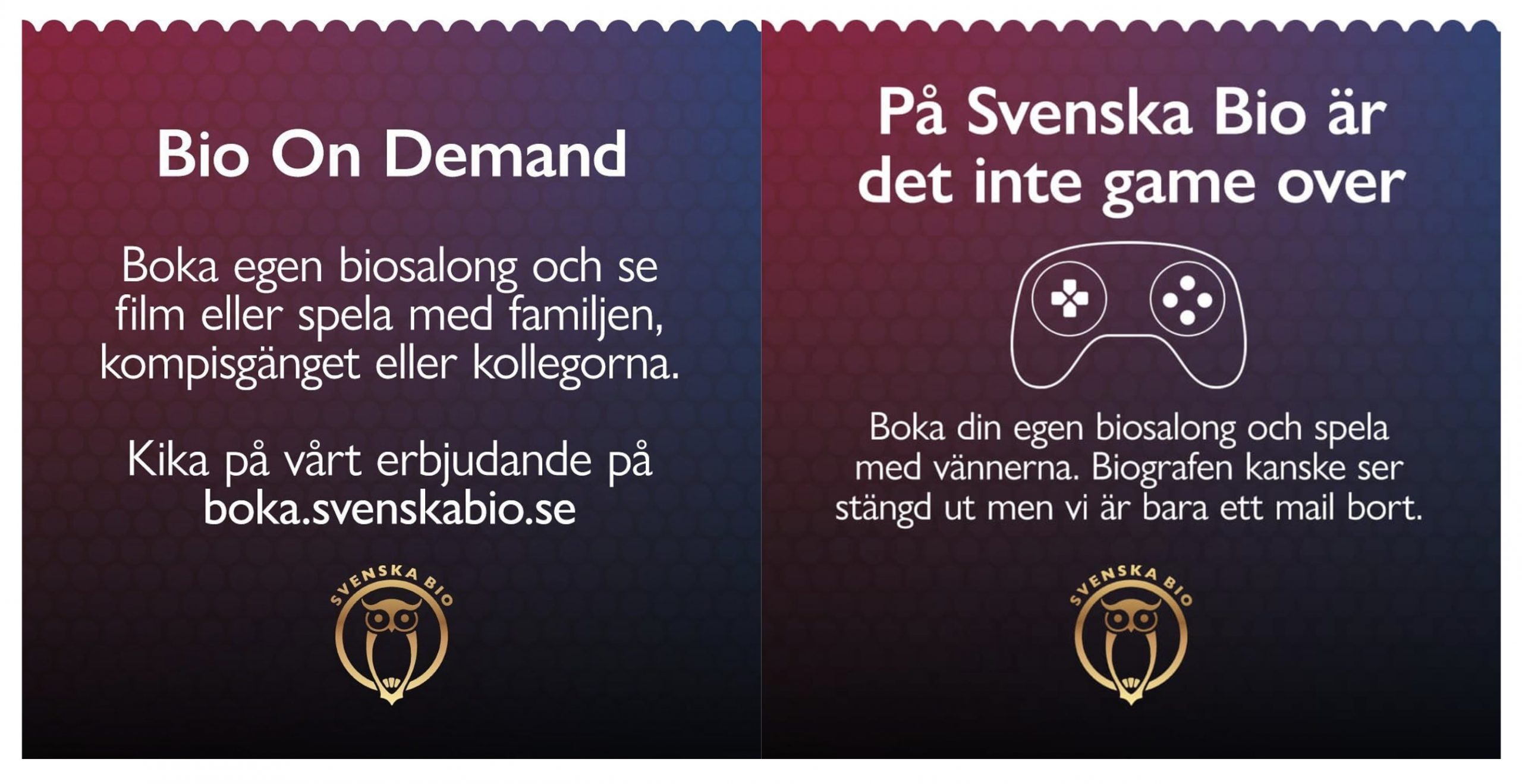 Cinema-on-demand in an actual cinema is a wow, who knew? This ‘private cinema show of your own’ proves that the moviegoing tradition can stay alive even when there’s no new product to show. Despite having run out of audience for the older films it was showing while its cinemas remained uniquely open, Sweden’s Svenska Bio has managed to keep going thanks to the success of its bold bet on cinema-on-demand (aka Jukebox Cinema), which is, unlike its homebound cousin, where you get a cinema salon all to yourself – or to your ‘bubble’ of up to eight people.

Peter Fornstam, third generation owner and manger of Svenska Bio, the second largest string of cinemas in Sweden, has kept his cinemas running with a robust campaign of cinema-on-demand. Fornstam says that his approach is many-pronged. “We have been active on social media, Facebook and Instagram in particular. But the impact has been through our website www.svenskabio.se and boka.svenskabio.se where most guests have found information.” Supplying the public with intel also helped local press to pick up on what Svenska Bio was doing to keep the cinema community alive. “I believe it’s attractive to write about something positive during this pretty weary period we are going through,” says Fornstam, adding that local cinema managers’ relationships with the local press also made for ‘natural and easy contact’.

There being no new content, films shown during this period were the stunning Oscar award winner “Parasite”, Sam Mendes big screen war epic “1917”, the popular family animated feature “Onwards”, Guy Ritchie’s retro geezer fantasy “The Gentlemen”, Robert Downey Jr. doing his Welsh accent in “Dolittle”, the hilariously colourful “Sonic”, wildly popular “Frozen 2” and the heartfelt “Peanut Butter Falcon”. Art house favourites were also screened along with some Swedish movies in there too, reflecting Swedens great love of its own domestic cinema. The audience was mostly families, first and foremost, then… dates.

Due to its larger population, Stockholm has had more cinema attendees but screenings and dinners have gone down well for Svenka Bio’s On-Demand Cinema scheme. Uddevalla and Halmstad have also been outstanding, partly because they had a dedicated audience but also due to a colleagues but also good press. “We actually have had to pass on some requests since we could not book them all,” adds Fornstam. Karlskrona, Trelleborg and Ostersund were also popular.

As for that taste of the cinema – important for so many movie-goers – everything was fresh at Svenska Bio because of previous initiatives. “We have activated several sales campaigns to the concession sales going, rather than letting our goodies go to waste,” says Fornstam. “The gamers consume quite a lot of soda and snacks and the family’s popcorn and candy.” The food is fresh, eaten with pleasure, but of course not in the amounts sold in a normal year. The response has been overwhelmingly positive. “We have been tracking our guests and feedback from our colleagues,” he says. “Cinema-on-Demand takes a lot of time to administrate but on the other hand it creates a personal contact between our staff and the guests. The whole disruption has made us realise how important the experience is rather than the service we provide and it teaches us to become better at the whole cinema experience.”

Svenska Bio wasn’t even the only operator in Sweden to launch this concept. At Stockholm’s Bio Capital on Sankt Eriksgatan 82, you can dine and watch a film on your own. For SEK 15,000 (USD $163) you can rent the auditorium for yourself and up to five people in total for a film or to play video games. The auditorium is then closed, ventilated, cleaned and disinfected between each session, in accordance with recommendations from Sweden’s Public Health Agency. “It’s always been possible to rent an auditorium from us,” the MD Jacob Abrahamsson said in a recent interview, “but normally we only have corporate hires. “When the pandemic struck we had to sit down and take some tough decisions, but also started to develop the concept.” With only 10-20 people per show at regular screenings at Bio Capitol, this was an added bonus that also allowed people to watch a film in comfort and feeling safe, Abrahamsson added. But that’s not all.

Korea’s Seoul CGV Gangbyeon, Sangbong, ”I Watch Alone” – a cunning twist on I Walk Alone – is part of a larger global trend of cinemas going bespoke for audiences who just can’t stay away. There is a possibility of watching all by yourself in a cinema. The event, ’Let’s borrow a movie and watch a movie alone’, is an attempt to satisfy both cinema owners and cinema lovers by keeping the auditorium in use, if only for the smallest of audiences. In China too, there were, pre COVID19, small private cinemas for rental and these have shown that despite issues with large public gatherings, the need for the big screen and the escapism it offers remains large.

It remains to be seen if any of these campaigns stay in use post-pandemic – after all, the opportunity to rent a cinema has always been there, if not always affordable. According to Svenska Bio’s Fornstam, he’s considering keeping them on but with adjusted pricing and only as long as it doesn’t impact regular business. “We will make sure that our suppliers of movies – distribution – gets the screen time it needs first.”