International cinema trade body UNIC has launched a comprehensive guide to help cinemas across Europe, with detailed information about cinema closures, possible re-opening dates as well as overviews of public funding initiatives and support. UNIC has also been active in liaising directly with individual member organisations on a national levels and driving the response to the crisis of the Global Cinema Federation (GCF), calling for a collective response to help cinemas. With cinemas shut across the globe, trade bodies such as UNIC are playing an ever more important role in giving and focus and voice to their members.

In early April UNIC released the online report “The impact of the Coronavirus outbreak on the European cinema industry” (PDF link here). In the words of the press release, it includes “detailed information on national closure processes, support mechanisms, measures relating to employment, taxation, rent and related costs, as well as a selection of key box office figures shared by Comscore.” The report goes into a tremendous level of detail for each individual European territory of when cinemas closed, what potential re-opening date [inevitably subject to change], as well as Closure & Re-Opening process.

The below example of Ireland, Italy and Kosovo gives an indication of the kind of information on cinemas that is provided. 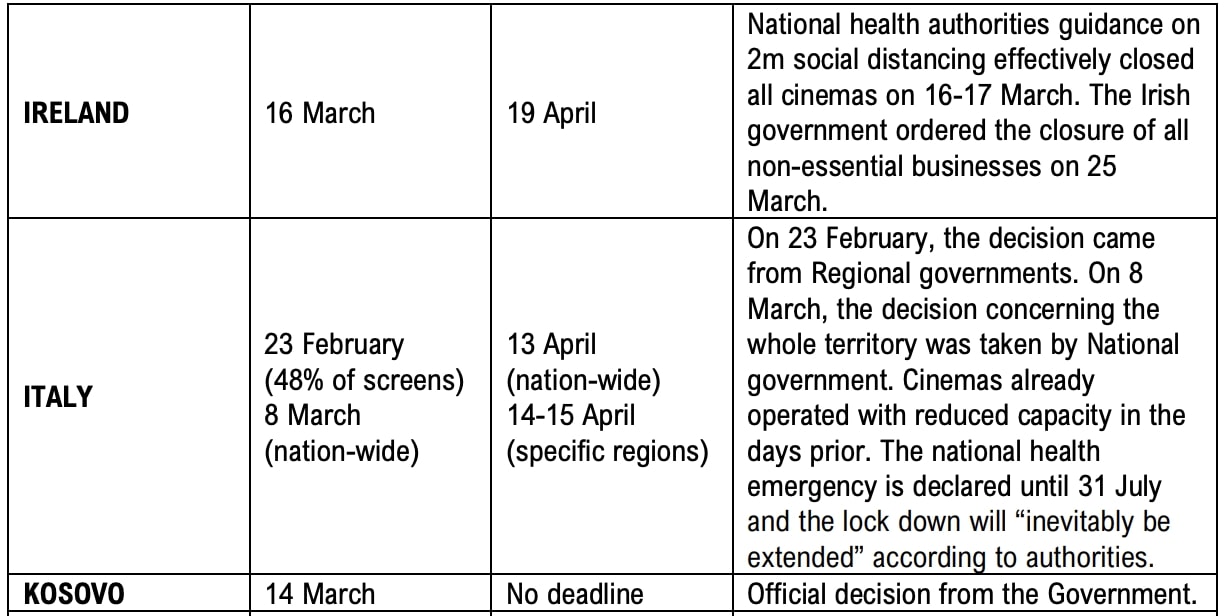 The report is also being updated continuously, noting that “Austria and Denmark on 6 April were the first European countries to announce concrete plans to reopen their societies after coronavirus lockdowns. France, Belgium and others have announced the creation of expert groups to come up with an “exit strategy”.” We should expect UNIC to continue doing this important work of providing insights into the potential phases of cinema re-openings across Europe.

The second part of the report looks at ‘Support Mechanisms’ open to cinemas and relevant companies. “The list below provides an idea of the range of initiatives currently introduced across Europe.” These include both National Support and Cinema Sector Support. 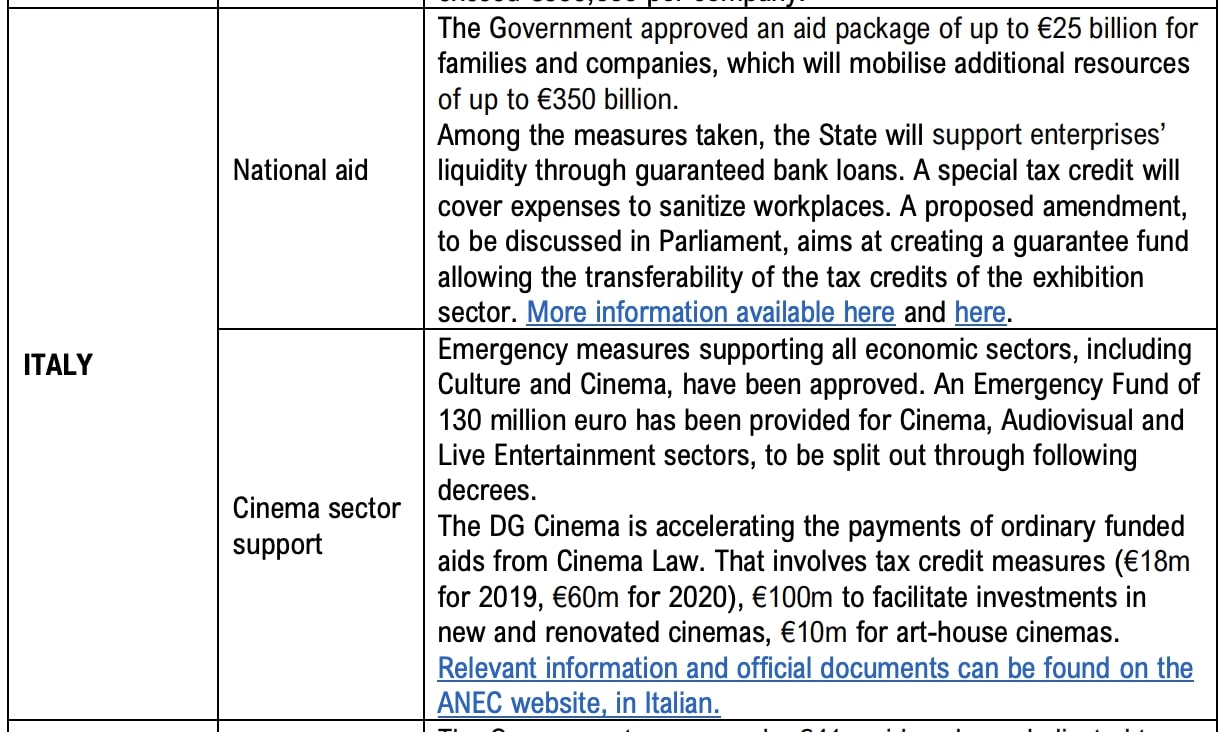 The measures vary significantly across the different territories, but it is heartening to read that so many countries are putting so much effort into safeguarding this sector. The third part of the report looks at Taxation, noting that “National authorities across Europe have been quick at delaying payments of various taxes for individuals and businesses,” which is a significant assistance to struggling businesses.

The fourth section is Rent & Related Expenses, which not surprisingly varies even more than the previous sections. In Germany, for example, the “federal government agreed to delay payments of rents until 30.06.2020”, while in Finland, “The City of Helsinki has decided to temporarily waive rental payments on commercial premises and terraces.” It is a fascinating snapshot of the many local initiatives underway. The last section looks at Employment, then finishing with boxoffice data from Comscore.

UNIC has also been active across social media in disseminating this report and information through Twitter and LinkedIn, as well as no doubt direct email and countless conference calls and videos with individual countries and member groups. UNIC was also one of the parties to the ‘Joint Film and Audiovisual Sector COVID-19 Statement‘, whereby the larger audi-visual sector “calls for urgent action by EU and Member State decision-makers to safeguard the future of the sector in the wake of the COVID-19 outbreak,” following the initial responses and measures.

It is clear that UNIC is preparing for a long task ahead, but it is equally evident that times of crisis like this demonstrate the importance and value of trade bodies and member organisations such as UNIC.