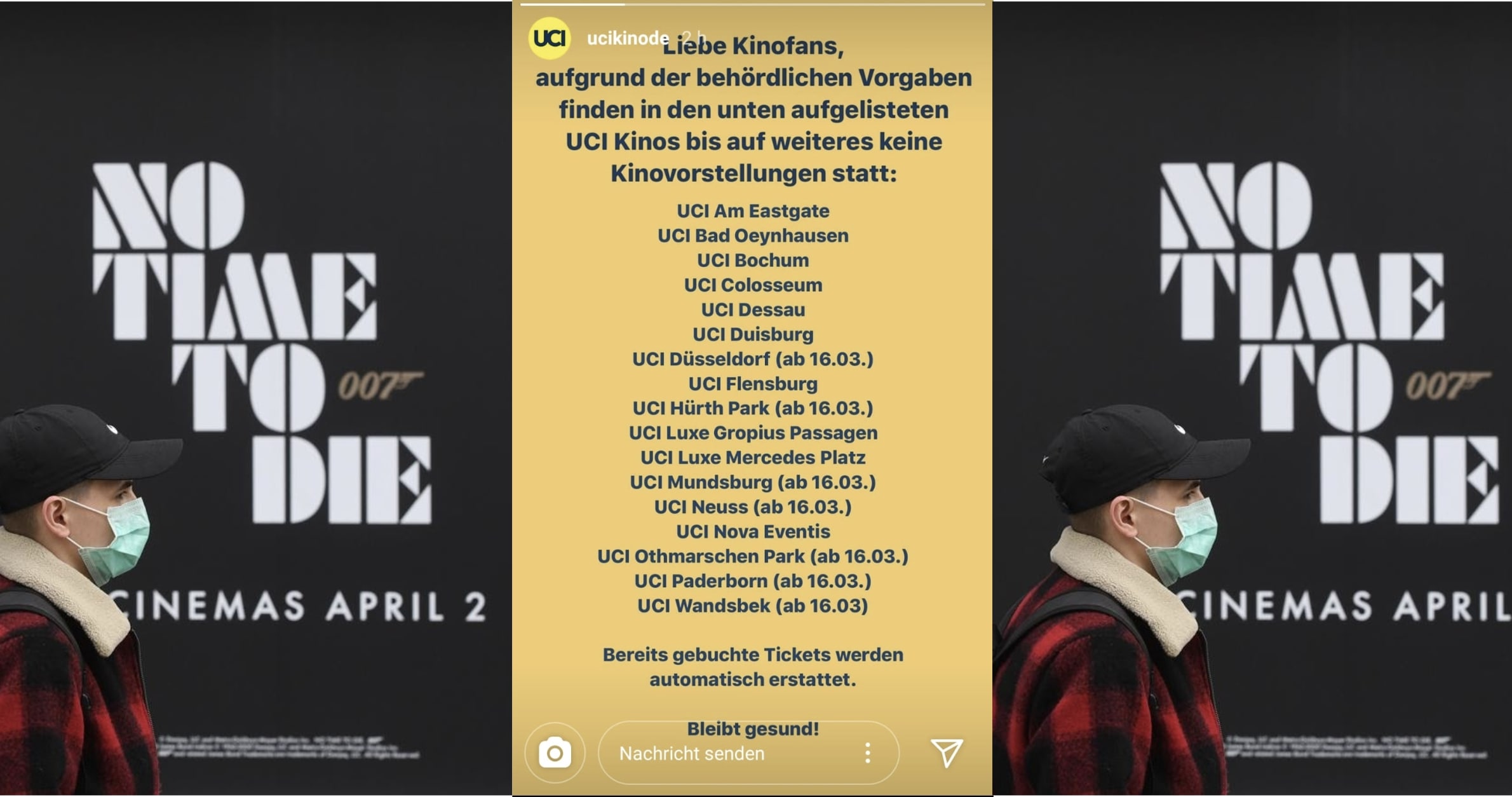 This post will be updated throughout today. Please check back for updates.

It is sadly becoming easier to track which countries haven’t closed their cinemas, than keeping track of all the ones where they have closed. Germany, Sweden, UK and USA are still keeping the Xenon and laser lights burning, though with screens ordered dark in New York City and Los Angeles (alongside bars, restaurants and more), it can only be a matter of days or even hours until the rest of the US follows. It seems that efforts to keep cinemas operating by capping audiences at 100 people or 50% per show and seat gaps were at best a stop-gap measure before closure. Turns out you can’t be half-safe any more than you can be pregnant. But with audience numbers anyway dwindling, it becomes more costly to keep a cinema open than to close it down completely.

USA – Cinemas have closed in New York and Los Angeles at the order of the cities mayors. It’s been the worst box office weekend in North America for the past two decades, with grosses of just USD $55.3 million. It is now a question of when and how soon all other cinemas in US and Canada wil close, not if. The next question will be for how long. New social distancing policies have been introduced by Marcus and AMC, but most likely it is too little, too late.

Gulf – Both Saudi Arabia and U.A.E. (Dubai et al) have closed their cinemas. This leaves Bahrain, Oman and Egypt as the only territories in the region where cinemas are still operating. The Saudi market overtook U.A.E as the biggest in the Gulf only this past February, despite cinemas still just rolling out. No word if construction on new ones will continue during the shutdown.

Turkey – Cinemas in Turkey will be closed from tonight at the midnight according to announcement just in. (no link yet)

France – Apparently the about-face decision to close all restaurants, bars, cafes and cinemas is because too many people were frequenting them:

Edouard Philippe notably deplored having “seen too many people in cafes, restaurants”. “I would be happy in normal times, but for a few weeks that is not what we should do,” he added, noting that “the first measures taken to limit gatherings were imperfectly applied”. French cinemas will reimburse both tickets bought and unlimited passes, without customers having to apply for refunds.

Hence France moved to Level 3.  French cinemas will reimburse both tickets bought and unlimited passes, without customers having to apply for refunds. The article also has a detailed overview of all the films cancelled and film & TV shoots on hold and festivals canned. There is a renewed discussion about shortening release windows, particularly as France currently stipulates a three year (!) ‘chronology’ and window between theatrical and SVoD such as Netflix.

Canada – Canada’s most outspoken cinema operator is not happy with Quebec “attacking the entertainment industry” during the pandemic, while pot shops and liquor stores remain open. But Vincenzo Guzzo “understands the logic” and will comply.

Finland – All schools and “cultural institutions” (presumably meaning cinemas too) will now be closed in Finland. This means that Sweden (and Iceland?) is only country amongst Nordics to still have cinemas running. Prime minister “Marin says that things have been done in a timely manner, always in the order when the moment of decisions comes. Marin says that Finland has not followed herd protection tactics like in Britain.”

Germany – Cinemas are closing all over the country (examples here, here and here), though there is at the moment no federal or state mandates for them to shut. Certain cities like Berlin have ordered its cinemas to close. Here is a regularly updated newsticker about events in Germany (in German). Cinemas have been ordered closed in Bavaria on Tuesday and Baden-Württemberg.

Luxembourg – Kinepolis and other cinemas in Luxembourg have closed as of this Saturday. That means that all cinemas in Benelux are now closed.

Finally – There are things we can do to help those most in need at time like this. For small and independent cinemas, urge patrons to buy gift cards and vouchers to be redeemed at a later date when they re-open. In New York a GoFundMe page has been started for cinema workers that need financial assistance. Please help if you can.