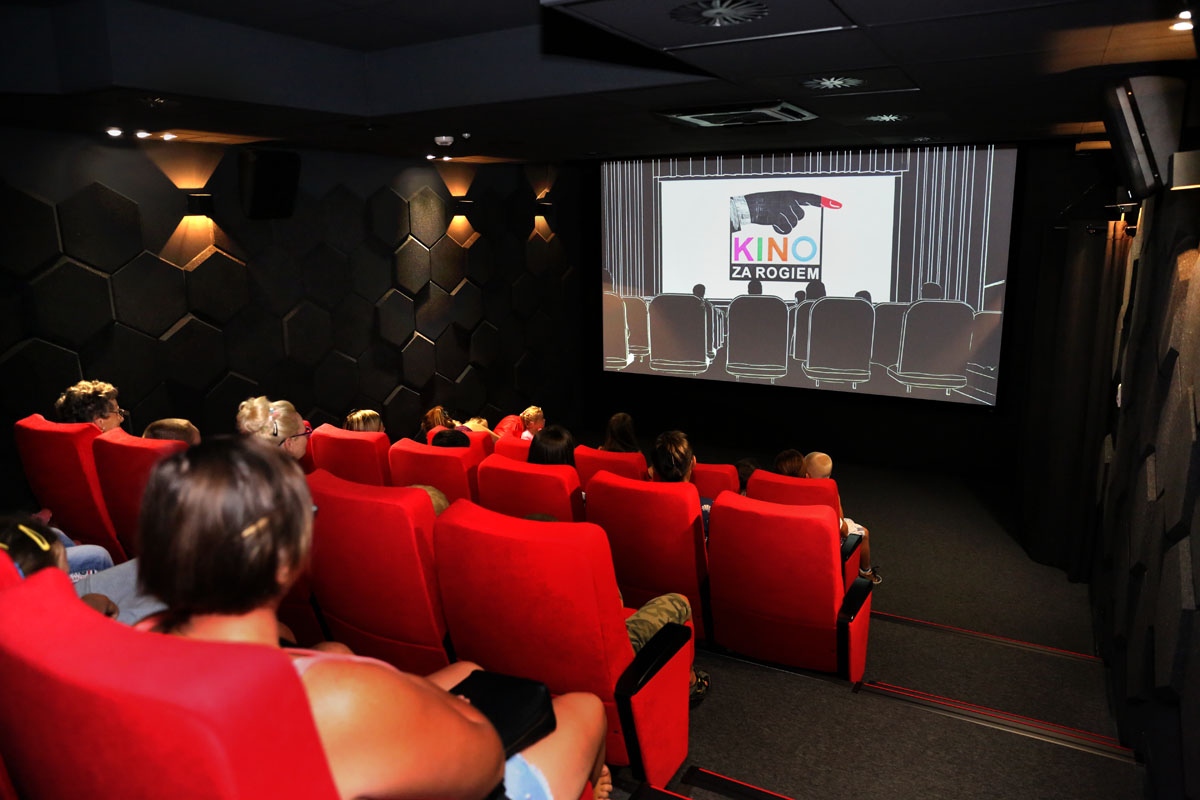 Poland has long been the fastest growing cinema market in Central Europe, if not the whole of Europe. Yet in the shadow of the multiplex majors Cinema City, Helios and Multikino a small cinema chain is carving out a different niche. Kino za Rogiem (Cinema Around the Corner), or KzR for short, is a network of 53 cinemas spread all over Poland, which points to a different future for cinema as a hub for communities that has a potential for the whole of Europe – and beyond.

KzR was the brainchild of Stefan Kaminski and Grzegorz Molewski, the founder of pay-TV channel Kino Polska. The idea was to open small cinemas in locations that have never had a traditional cinema, though it has since spread to big cities as well. Typically it has 20 to 40 seats in a purpose built or re-fitted space that is not a traditional cinema. The aim of KzR is not just to be a small cinema but to be a centre of cultural and art activities, both on-screen and off-screen. However, it can also be part of a more commercially oriented business, such as a cafe.

What unites those that have joined the KzR ‘movement’ is a willingness to adhere to the ambition of the KzR philosophy, which is spelled out in detail in the ‘About Us‘ section of the company’s website. It is worth quoting parts of it in full:

We believe in the magic of cinema – this special experience of watching a movie in a dark cinema room with other people. We enjoy the technological revolution in cinematography, we admire modern cinemas and contemporary movie display standards. On the other hand, however, we notice that today’s cinema has become, above all, metropolitan entertainment, that it does not reach a huge number of cinema fans.

It then goes on to state: ‘It doesn’t have to be this way.‘

The idea behind the Kino za Rogiem project is to create a new philosophy of cinema appealing to the longing for an intimate community, an idea for a cinema for friends. Our intention is to build a network of small cinemas, cheap to operate and maintain, but those that retain the most important advantages of modern network cinemas, in particular digital image and sound quality. Cinemas Around the Corner are primarily multimedia rooms adapted to the function of a small cinema, created as part of the existing public and private infrastructure in cultural centers, libraries, schools, educational and sports centers, fire stations, sanatoriums, clubs and cafes.

Kino za Rogiem is also filling a gap that comes from the decline of single screen cinemas, which we common throughout Poland during the communist era, but have had trouble making the transition to the multiplex era. In 2001 there were 639 small single or two-screen cinemas in Poland, but by 2012 that figure had been reduced to 341. KzR started out in small cities, but can now be found even in large cities. Unlike traditional single screen, KzR offers a much broader programme of content despite (or perhaps because of) it not showing the latest blockbusters.

KzR are not designed to show the latest Hollywood blockbusters, which is why their equipment does not have to be DCI-grade. Despite this KzR places a premium of delivering a quality presentation in the best possible setting, with fairly stringent quality requirements.

For anyone looking to open a KzR the website section ‘I Want to Open A Cinema‘ will instruct them in detail of the options and requirements. Currently you can opt for a 20-seat, 30-seat or 40-seat configuration, for spaces ranging from 30 sqm to 80 sqm, with a minimum of three meters ceiling height, with 230V electricity mains and an Internet connection of no less than 5Mbps. But the tech spec page notes that the most important requirement is to be able to engage with your local community and make cinema ‘fashionable’.

Having re-fitted the appropriate space and equipped with the appropriate projector, sound system, screen and seating, there are further costs and steps that need to be met before your local Cinema Around the Corner can start operating.

While it is thus cheaper than a traditional cinema, opening a KzR is still a significant investment. The need to engage the community makes the difference whether it is profitable or not, particularly when it comes to selecting the programming.

Those who become part of the KzR Network have access to an on-demand library of several hundred titles to choose from. These range across traditional feature films, documentaries, animation and films for children. There is a regular programming of 12 films per year that are centrally booked and which each operator is obliged to screen. After that, however, it is up to each individual cinema which films or other types of programming they wish to show. Most interestingly, audiences can book films which the local KzR then screens, making it a cinema-on-demand operation, for anyone who goes to the website: kinozarogiem.pl

‘Hollywood’ titles tend to be well-reviewed titles from independent studios and include recent productions such as “Adrift”, “Hell or High Water”, “Molly’s Game”, “Selma” and “Sicario”. However, all major Polish titles tend to be available, including blockbusters like “Kler” and “Mafia Wives”, if not day-and-date with the mainstream release. There is also a substantial selection of titles from other European territories, including plenty of children’s and animation titles.

In total there are currently 318 feature films, 56 documentaries, 144 children’s films and 130 animations. KzR is supported by the European Union and the EU’s Regional Development fund, so it is natural for it to promote European culture. As mentioned, there is also opera from the New York’s MET and Bolshois, as well as sports and multi-media events.

Ticket prices are reasonable, as little as PLZ 5 (USD $1.27) and speaking to Gazeta Wyborcza, Pawel Kadluczko who operates the ‘Kino za Rogiem Cafe’ in Rzeszowie charges PLZ 8.50 (USD $2.16) and will screen the film even if it is just one spectator in the auditorium:

“I am an engineer by profession, I have a successful company. But I am also an idealist and I wanted to do something that would satisfy my higher needs. We set a low ticket price for the cinema to suit all budgets. Operating at this level is not motivated by any desire to make a profit. It is also important for me that this is a family venture in which my adult children are already involved,” says Pawel Kadluczko.

He goes on to explain that:

If the cinema supports itself, that’s enough for me. I hope that the cinema and cafe will earn money by renting out the auditorium and cafe for social events, which we will organize, amongst others children’s birthday with film screenings. We can [also] provide a room for small trainings or presentations.

There is thus a commercial interest at the heart of the KzR operations, even if they are not as profited oriented as its Polish multiplex cousins.

How big of a market can an operation like KzR’s network tap into? Founder Grzegorz Molewski answered this in an event covered by Polish Radio. “We found that in Poland out of 2.5 thousand municipalities, cinemas are in less than two hundred and are mainly concentrated in large cities. This means that large areas of the country are deprived of the possibility of contact with film in the right environment, i.e. in cinema aesthetics.”

He goes on to point out that, “60 percent of Poles do not have access to cinemas for two reasons: either there is no cinema in the area or it is too expensive.” For a country that prides itself on its rich cinema heritage (think Polanski, Wajda and Kieslowski) and whose domestic share of the box office continues to ride high, this is clearly a problem.

What KzR most closely resembles internationally is the Emerging Cinemas and Emerging Pictures network founded by Barry Rebo, together with  Ira Deutchman, Giovanni Cozzi, back in 2005. It too pioneered the showing of non-Hollywood films and live events in venues that were not traditional cinema but had a strong local and cultural connection. There are also echos of France’s VTHR network and of course more traditional school and studio cinemas, as well as Sweden’s Folkets Hus & Parker (FHP), particularly in its early e-cinema days when it depended wholly on event cinema screenings.

Yet Kino za Rogiem is also quite unique in terms of what it offers and how it delivers: the small-scale intimacy of a bijou Everyman type of screen, the film juke-box capabilities of a Eclair Play or GDC’s Go Go Cinema, the on-demand promise of China’s private cinemas, the small town access to a big screen experience, combined with a richness of content that stretches from the best of independent and world cinema to live events and alternative uses for the auditorium.

Poland has a long history of of exporting film talents, such as Steven Spielberg’s perenail cinematographer Janusz Kaminski, but it could equally well export the KzR concept to the rest of the Europe, if not the world. It may not be DCI, but it is definitely something special.