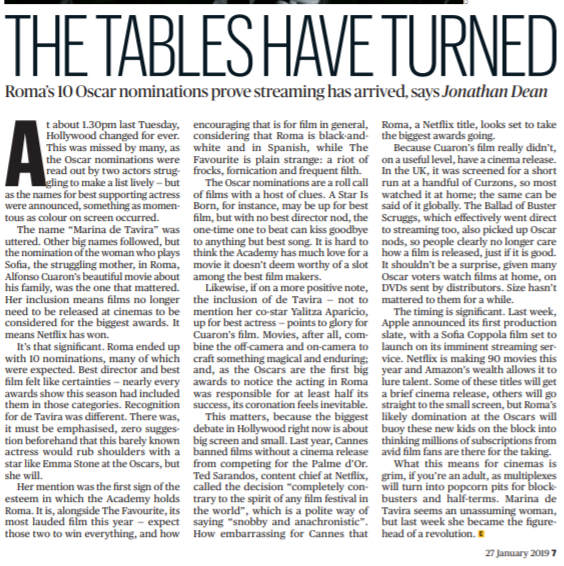 Last weekend the Sunday Times in the UK published an opinion piece by Jonathan Dean titles “The Tables Have Turned”, in which he looked at the 10 Oscar nominations for “Roma” and concluded that “streaming has arrived.” No disputing that, but he then went on to claim that “It means Netflix has won.” He concluded the piece by claiming, “What this means for cinemas is grim, if you’re an adult, as multiplexes will turn into popcorn-pits for blockbusters and half-terms.” This prompted Vue’s COO Steve Knibbs to put proverbial pen to paper and write a response to the Sunday Times, which we re-print here in full for the benefit of those that cannot mount the Sunday Times’ paywall.

I read with interest the piece on the Oscar nomination for Netflix’s Roma in last week’s Culture section. More so from the perspective that the article predicted that this could possibly mean the role and future of the cinema could be to become nothing more than a “grim… popcorn pit for blockbusters and half-terms”.

The future of the cinema has always been a favoured topic of debate and greatly over exaggerated. Cinema has had a long and dynamic 115-year history, experiencing straight line growth for the last 50 years despite the evolution of in-home and small screen entertainment. It is one of the last remaining spaces in society for people to enjoy unparalleled entertainment and enjoy a premium seat, screen and sound experience. Not forgetting its role on the high-street, in local communities and for family entertainment at an accessible price where all generations can enjoy something together. At its core, the cinematic experience is true escapism, complete immersion and a powerful shared social experience in an increasingly fragmented world.

Last year was a record-breaking year for cinemas with 177m tickets sold. We provided cinema-goers with a total of 510 big screen releases – an average of almost 10 new releases every week across 863 screens providing entertainment day and night 364 days a year. This also includes 89 distinct event cinema titles. The multiplex not only revived the cinema industry but is the only type of cinema that has the capacity and infrastructure to provide this huge range of diverse content and welcome millions of customers around the UK through its doors. Not into a “popcorn pit” but into a premium stadium environment with VIP and luxurious recliner seating options, advanced Sony 4K digital projection and Pin-sharp Dolby Atmos overhead surround sound filled auditoriums. The multiplex is home to Mission Impossible as much as it is to The Royal Opera House, National Theatre, pre-school animations, live music festivals and sport – all for a national average ticket price of £7.22.

To quote Mark Twain “The reports of my death are greatly exaggerated”.