Can you have a cinema without such essentials as seats, walls or a roof? The Luna Cinema is a resounding proof that not only is it possible, but that it can still be an amazing experience. As this past summer fades to a memory, we look back at an amazing and nostalgic cinema night under the full moon on a hill overlooking London.

Both the Luna Cinema and Secret Cinema celebrate their 10th anniversaries this year, having been pioneers for non-traditional cinema formats. Secret Cinema celebrated its first decade with an elaborate re-staging of “Blade Runner: the Final Cut”, which was such a success that its single-venue once-a-night screening propelled the film back into the United Kingdom Top 10 box office charts and generated plenty of column inches of media coverage.

While the Luna Cinema may not have cracked the box office charts, it has gone from strength to strength with its outdoor summer screenings across the UK. Helped this year by an unseasonably warm and dry summer, it even held its own again the World Cup in June and July. Describing itself as the UK’s #1 open air cinema, it hosted 175 screenings this summer, as well as Luna Beach Cinema in Brighton and Luna Kids Cinema.

Luna’s screenings are hosted all over the UK, mainly in parks and large outdoor spaces. This year new venues included Ashton Court (Bristol), York Minster, Bolton Abbey, Geffrye Museum (London) and Guildford Cathedral. Typically the Luna Cinema decamps on a site for a weekend, with three films shown across Friday, Saturday and Sunday. There are usually two different locations operating simultaneously each weekend. 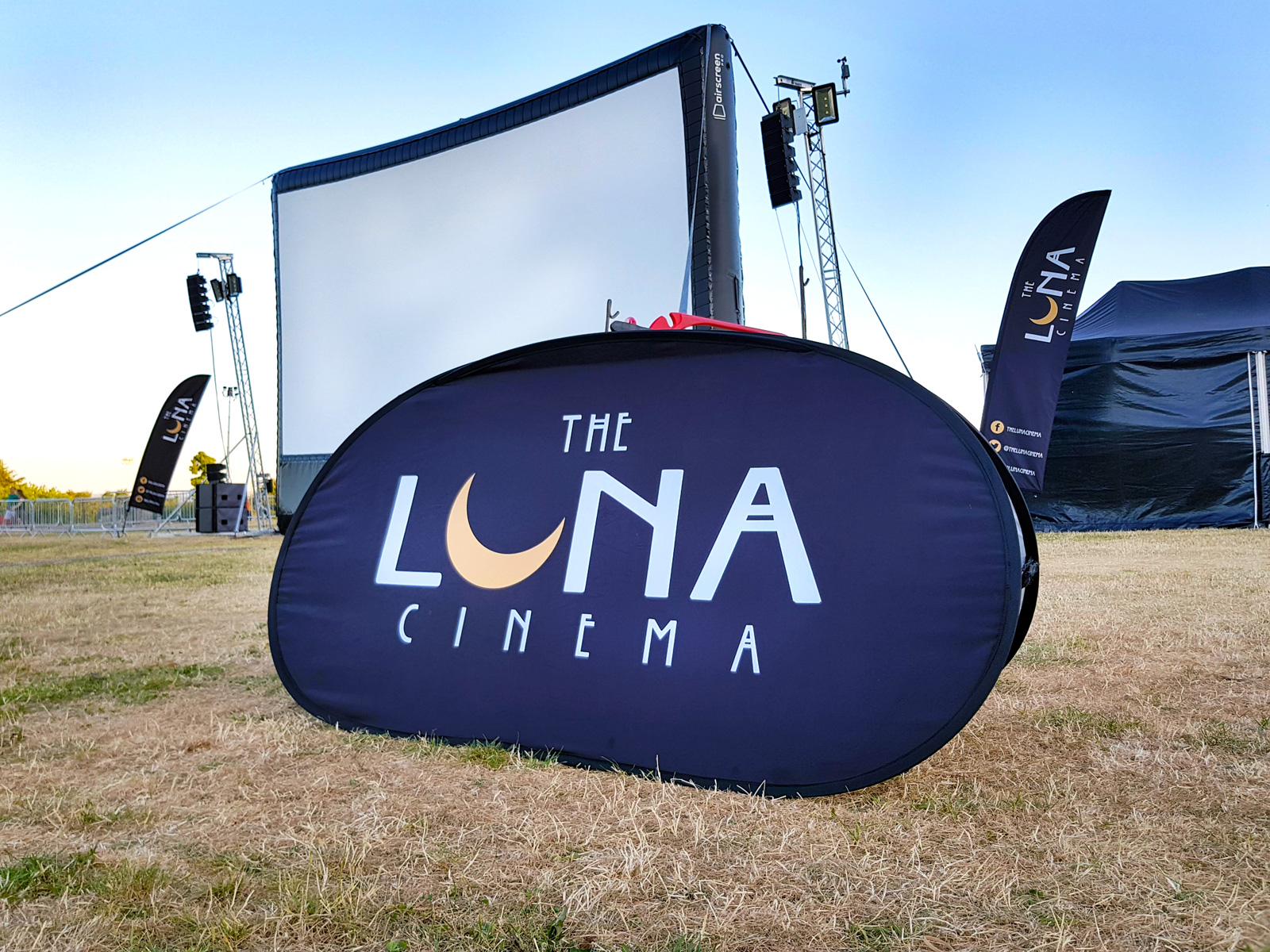 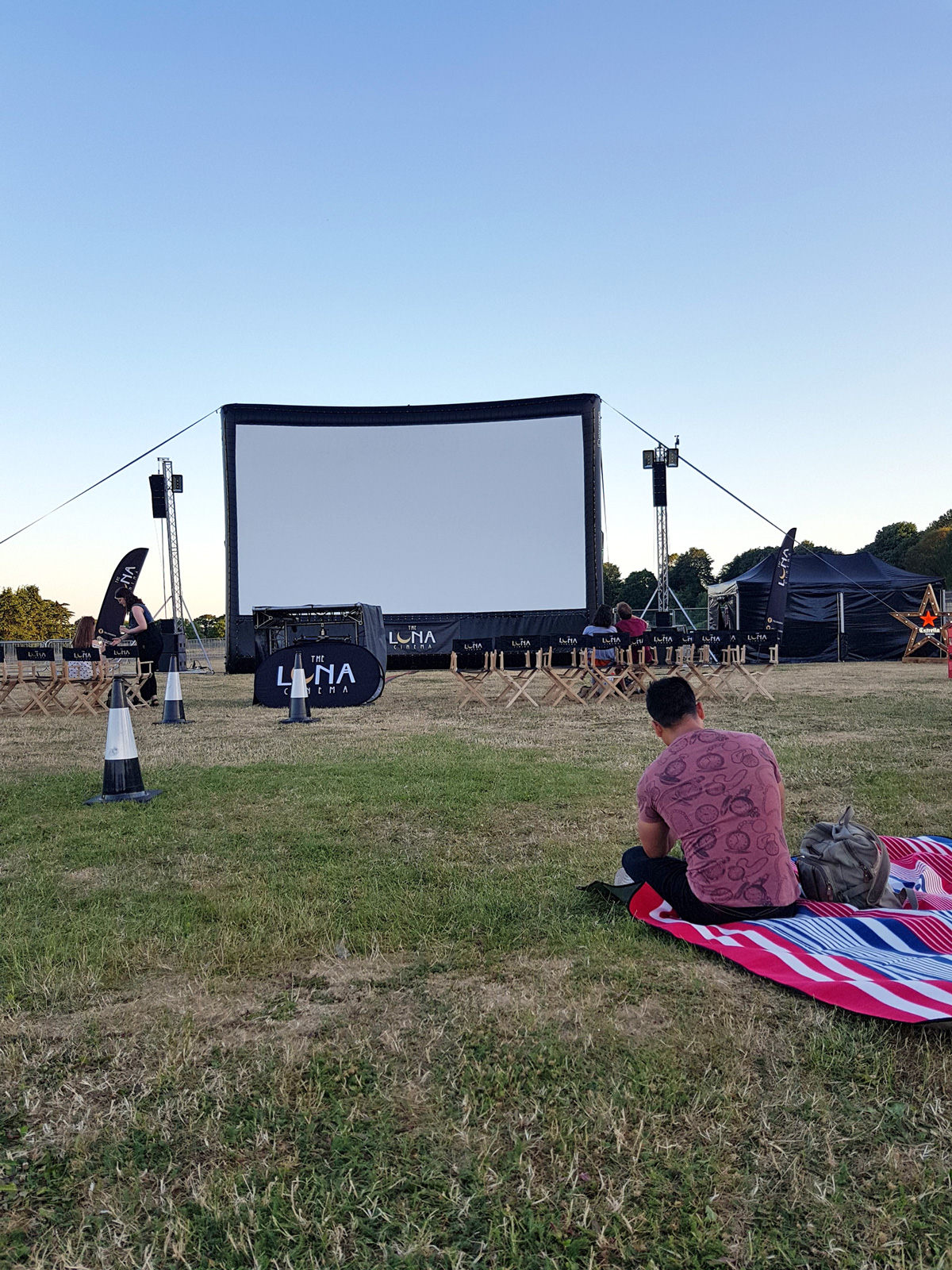 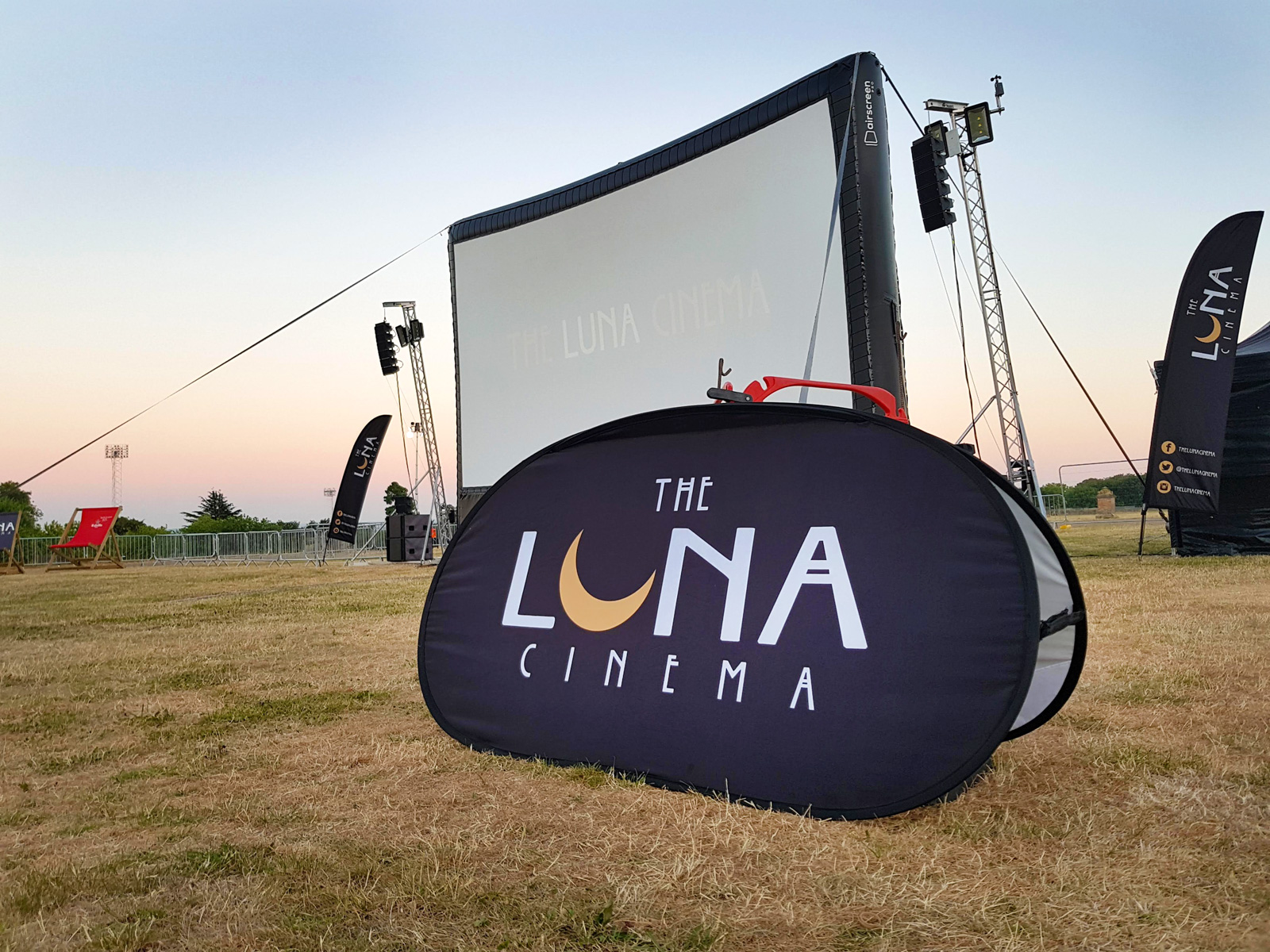 Our screenings follow one simple formula: a classic film on a big screen in a beautiful or prestigious setting. We use state of the art screens, digital projectors and bespoke sound equipment to provide a cinema quality visual and audio experience, but with the magic of being under the stars… We strive for brilliant cinematic experiences, at the heart of which is the belief that the setting in which you experience the film is as important as the film itself.

Having operated for ten years, the company has built up significant expertise, with a slick operation of moving, erecting, operating and repeating its mobile cinema, food and beverage, and security operation. The logistical complexities should not be underestimated, with even a stand-by ambulance parked just outside the perimeter for any worst-case scenarios. Visitors to a Luna Cinema screening are in some ways safer and more protected than regular cinema audiences, though for GBP £15 per (USD $19.65) ticket, this is as it should be.

The Luna Cinema is not made of sugar, so even if it rains the show goes on. It is only if the weather makes a screening unsafe (think lighting or winds strong enough to blow away the inflatable screen) that organizers will cancel a show. So no hopes for refunds on account of more typical damp London summer weather. Fortunately this past summer was the exception to the rule, with the screenings running from May all the way until October.

When it comes to food and drink, you are welcome to bring your own picnic basket, though there are plenty of options on-site for anyone more hungry and thirsty. Glass bottles are the only thing not permitted (for safety reasons), though the staff who search your bags on entry will happily pour your beer over into a plastic mug, to avoid customer upset. The focus seems to be mainly smaller bottles, as the full wine bottle in Celluloid Junkie’s hamper was waved through security. You are also encouraged to bring something to sit on, whether a blanket, foldable chair or even (we saw) beanbags. 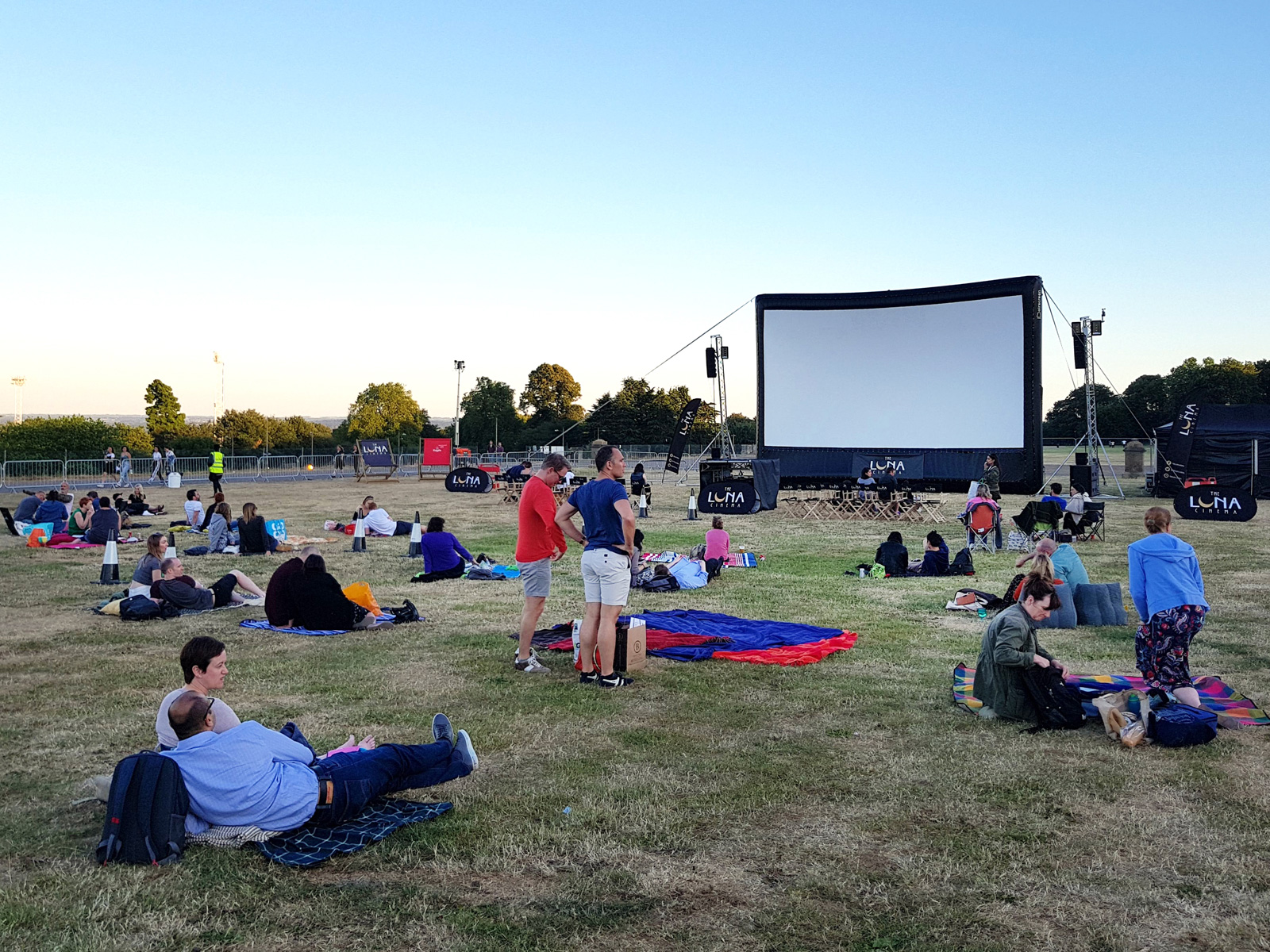 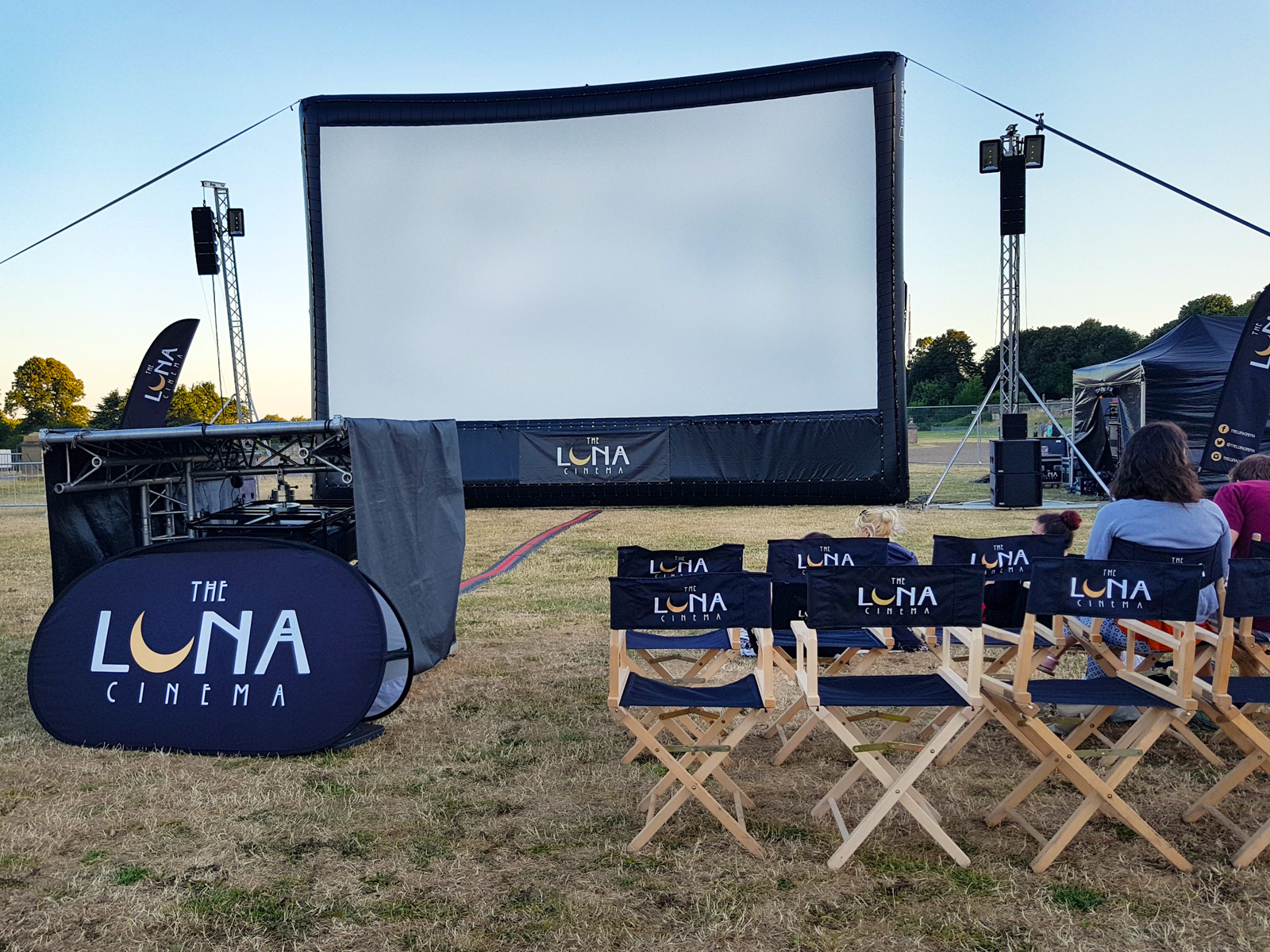 For those that want a truly VIP experience – or simply feel to old to sit cross legged on the ground for the duration of a feature film – there is a row of director’s chairs at the front, where for the additional “Premium Ticket” price you also get a free drink and snack. There is no smoking and you are politely reminded to take your trash away with you afterwards.

Twilight and 80s Nostalgia
The fenced-off screening site opens for customers an hour and a half before the start of the film, when the sun is low on the horizon. There is a steady trickle of couples, groups, families and even brave mothers coming alone with their infants. All of them come with baskets, bags, rolled up blankets, cushions and more. You can tell the veterans by the fact that they carry Luna Cinema-branded foldable backrest seaters. Helped by the warmth of the weekend summer evening and the scenic location there is a distinct feel-good buzz.

Crystal Palace was once home to a vast and magnificent steel-and-glass structure that housed the 1851 Great Exhibition of London. After a fire in 1936 the building was razed and only a few terraces with stone arches and the name remain on the hill, which is instead now home to one of London’s two main television masts. So it is particularly fitting, if not outright ironic, for a pop-up cinema to make its home at the foot of the source of broadcasts for in-home entertainment.

You can book tickets at home and bring a print-out or e-receipt, unless you prefer to buy the tickets on site. There is significant manpower required, not just for setting up the site, but for manning the box office, entry, security check, perimeter watch, on-site guards (“Stewards”), medics, operators of the food and beverage stands and more. Without counting it seemed like at least a dozen people, but it made for a very well run site. It was helped by everybody being there to enjoy themselves. 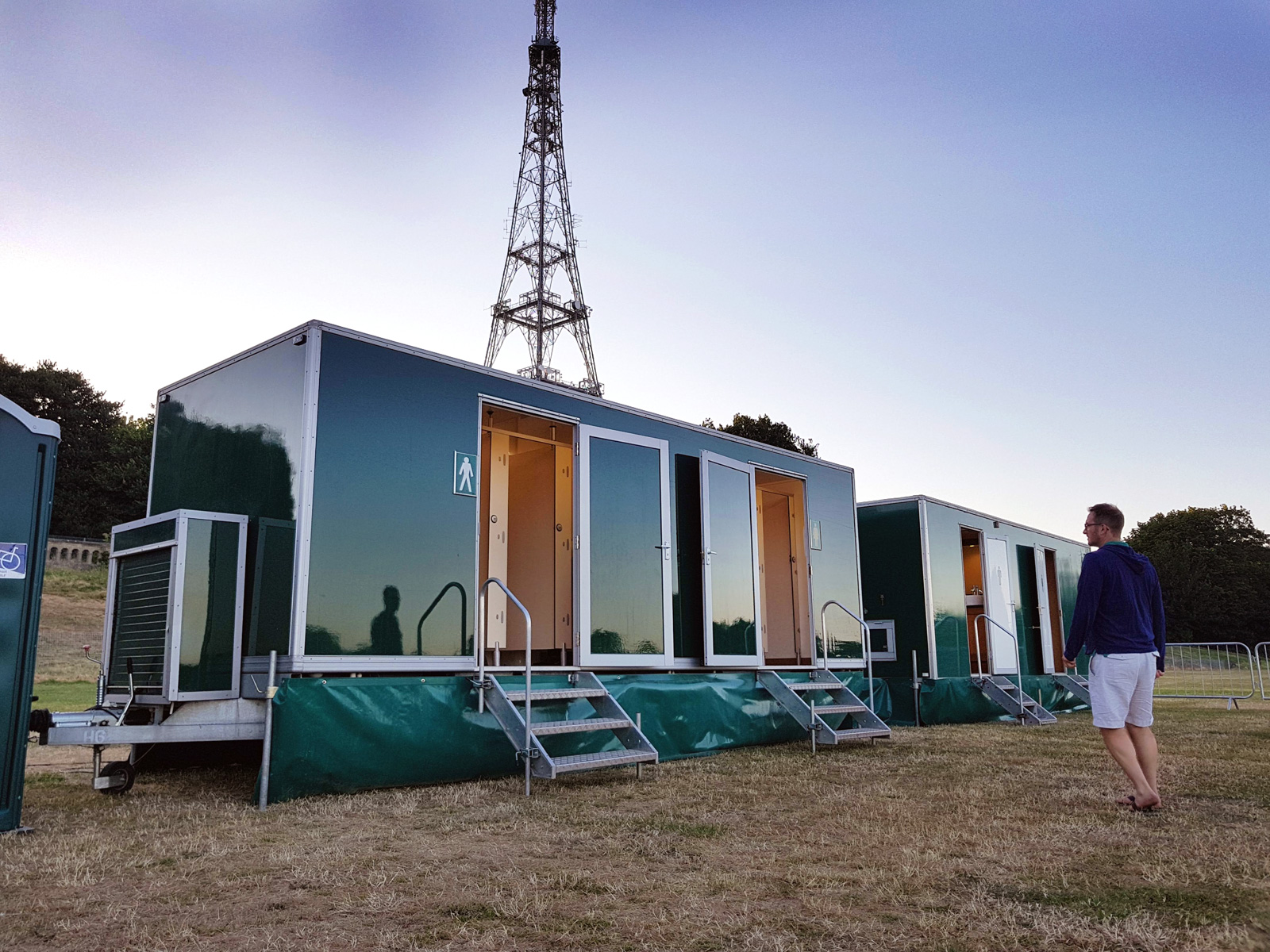 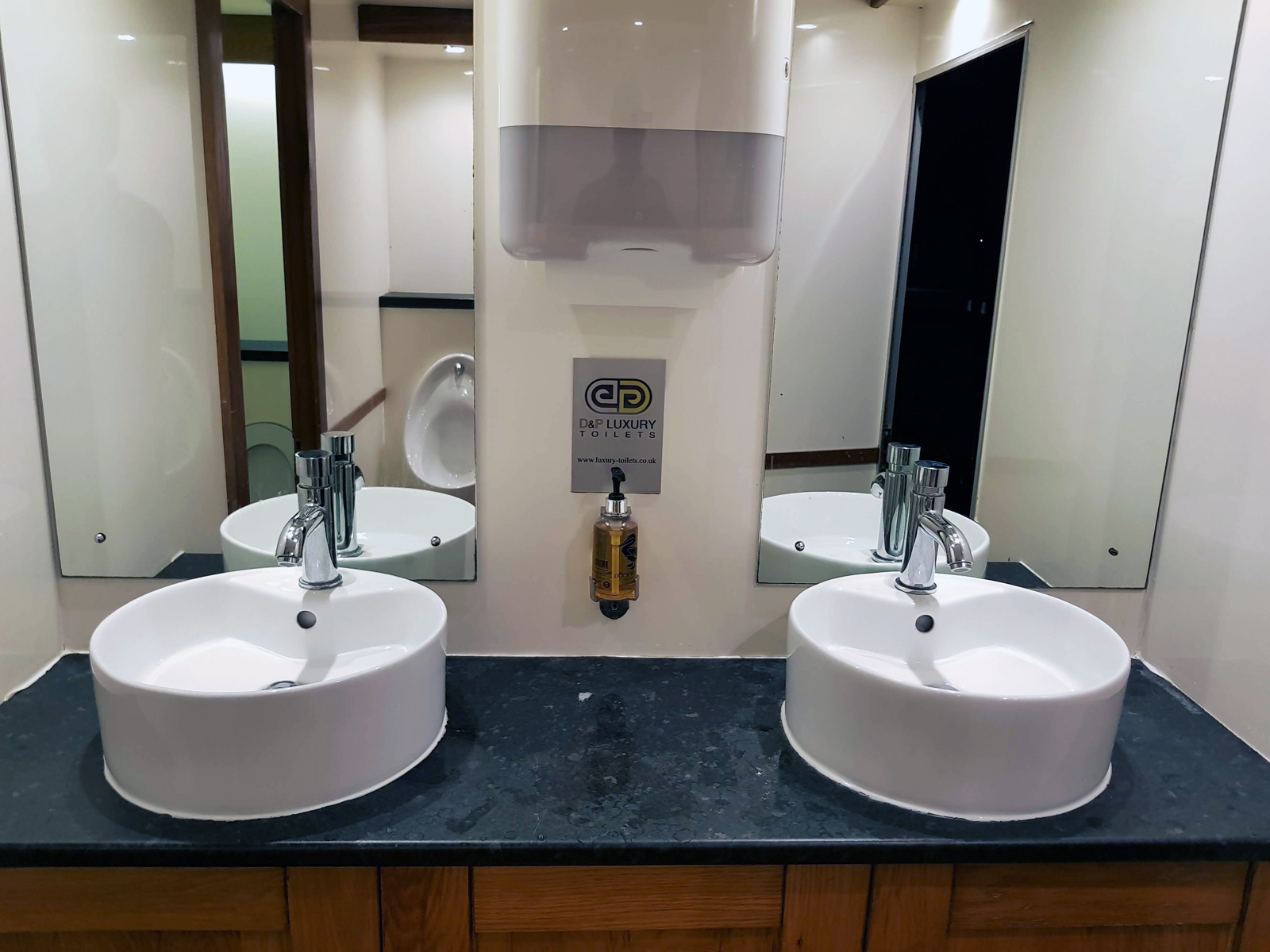 The Luna Cinema was founded by London-based actor George Wood, who had the idea for a summer cinema while recovering in hospital with a broken leg. With London not being Sydney, Ibiza or Los Angeles, his friends dismissed the idea immediately on weather-related grounds. While London has an open air theatre in Regent’s Park, open air cinemas were not a regular summer feature, though there had been several limited runs. The success of Luna Cinema has since encouraged many others, but few of them as slick and well run as the original. “It’s all about the experience,” the founder said in an interview two years ago, “There is a general boredom with the multiplex experience.”

Films screened are a mixture of classics and recent releases. Our weekend visit offered “The Breakfast Club”, “Three Billboards Outside Ebbing, Missouri” and “The Greatest Showman”, of which we saw the first. Other perennial summer favourites are “Grease”, “Pretty Woman” and “Dirty Dancing”. For on-site themed films there is “Top Gun” at the Royal Air Force Museum in Hendon, “Victoria & Abdul” at Kensington Palace, “Four Weddings and a Funeral” at Westminster Abbey and why not watch “Jaws” floating in the Brockwell Lido.

This is not DCI-grade cinema, but once the sun had set the projector housed up front did a good job of projecting a high-definition image onto the inflatable screen, with stereo sound that did the film’s dialogue and music tracks full justice.

There is an impressive range of food and drinks, as well as merchandising (seating, blankets, t-shirts, caps and more). While it is obviously not cheap, it is impressive that you can even have freshly made pizza from a wood-fired oven, wheeled in for the occasion. Perhaps it is too much to ask for, but the lack of fresh popcorn is the only F&B let-down (you can have pre-packaged ones from Popcorn Shed). 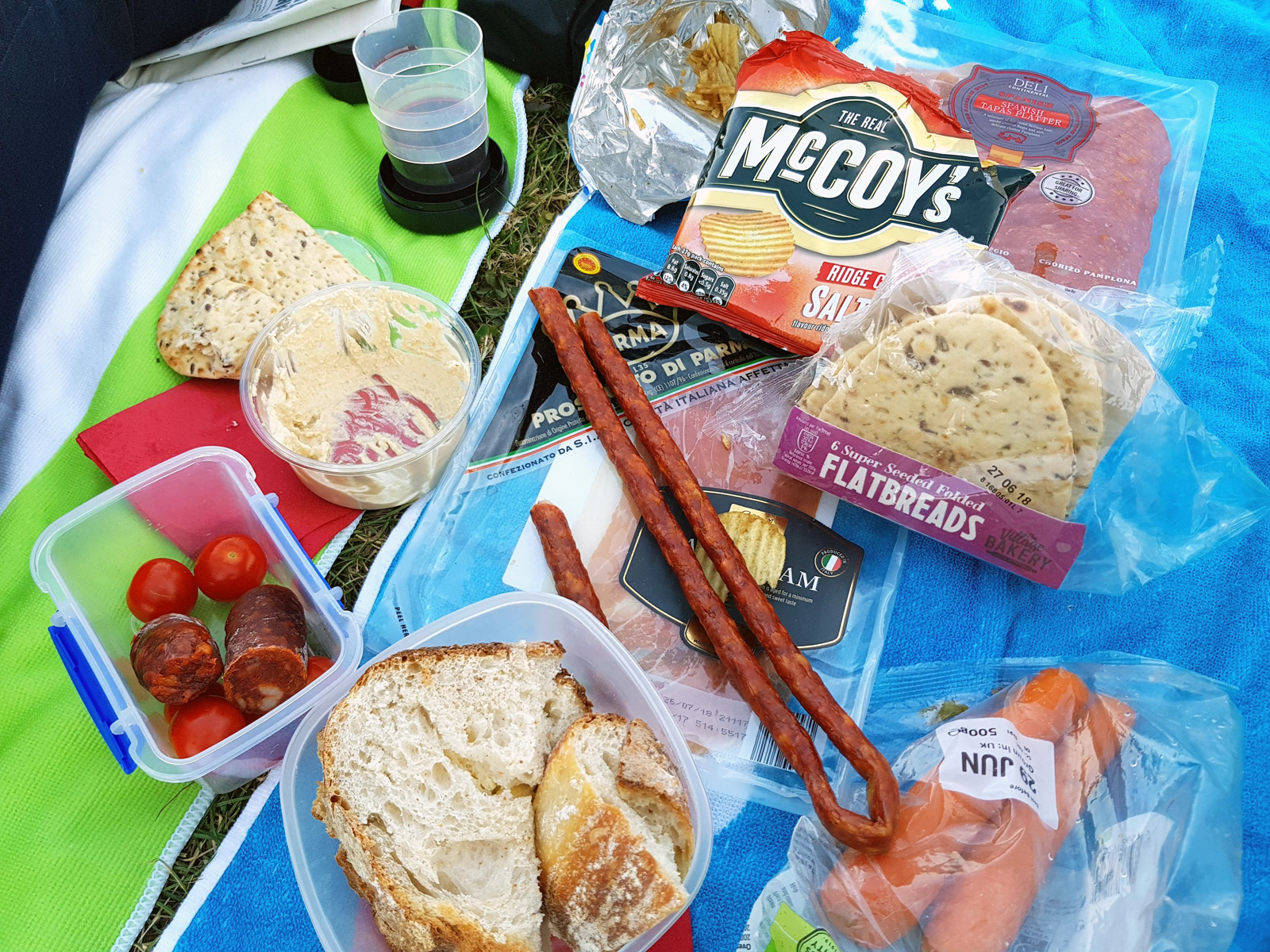 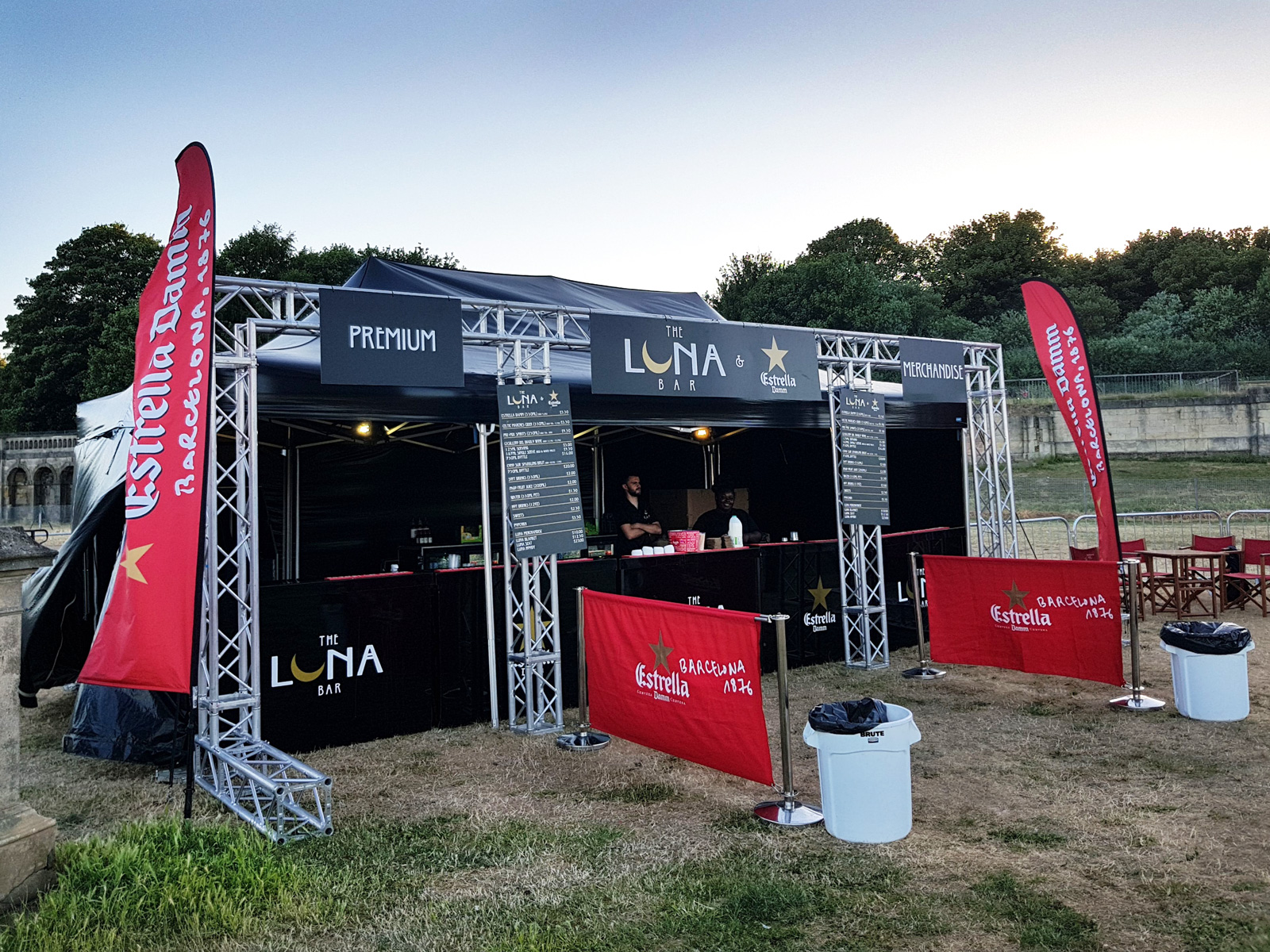 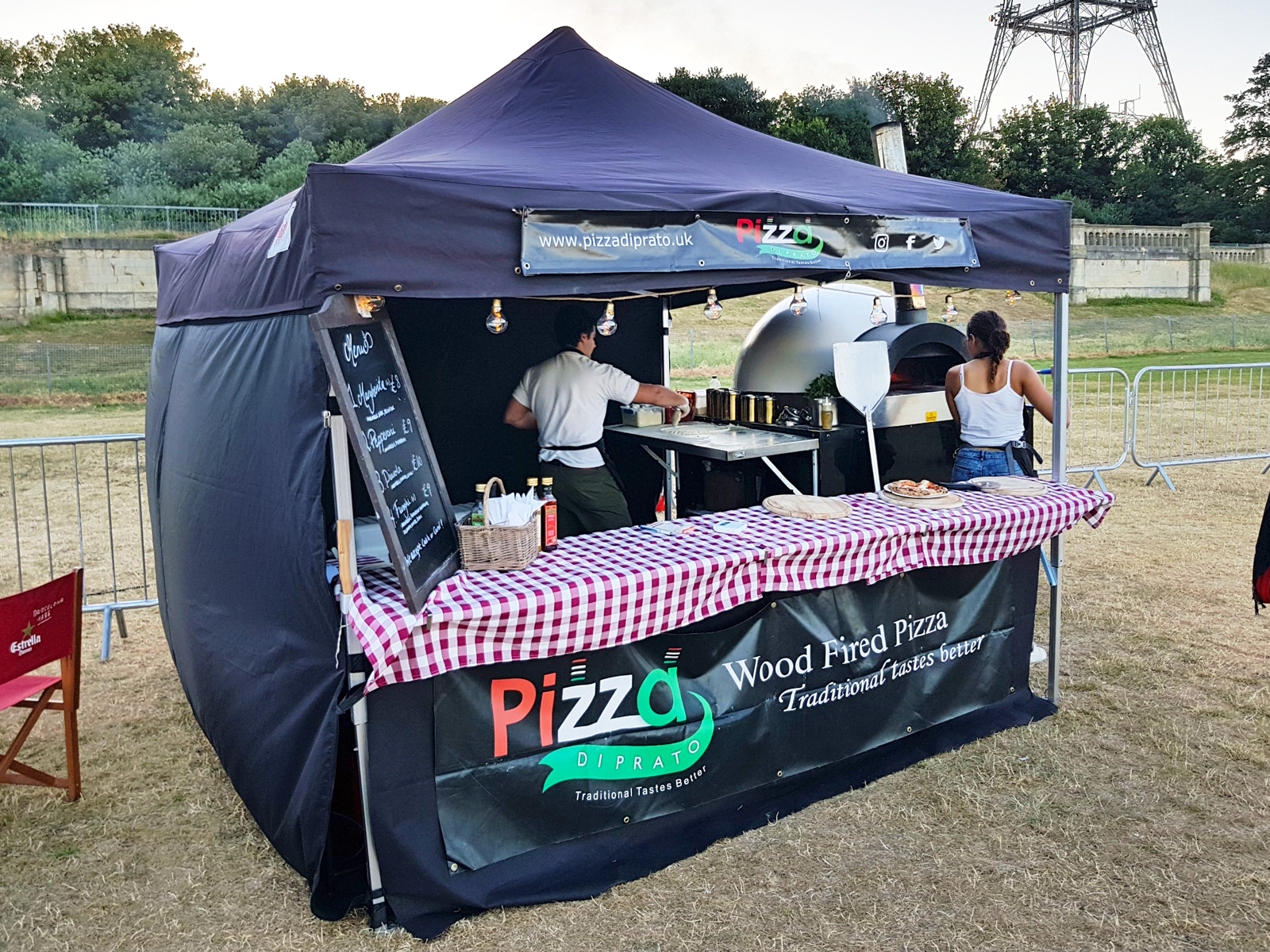 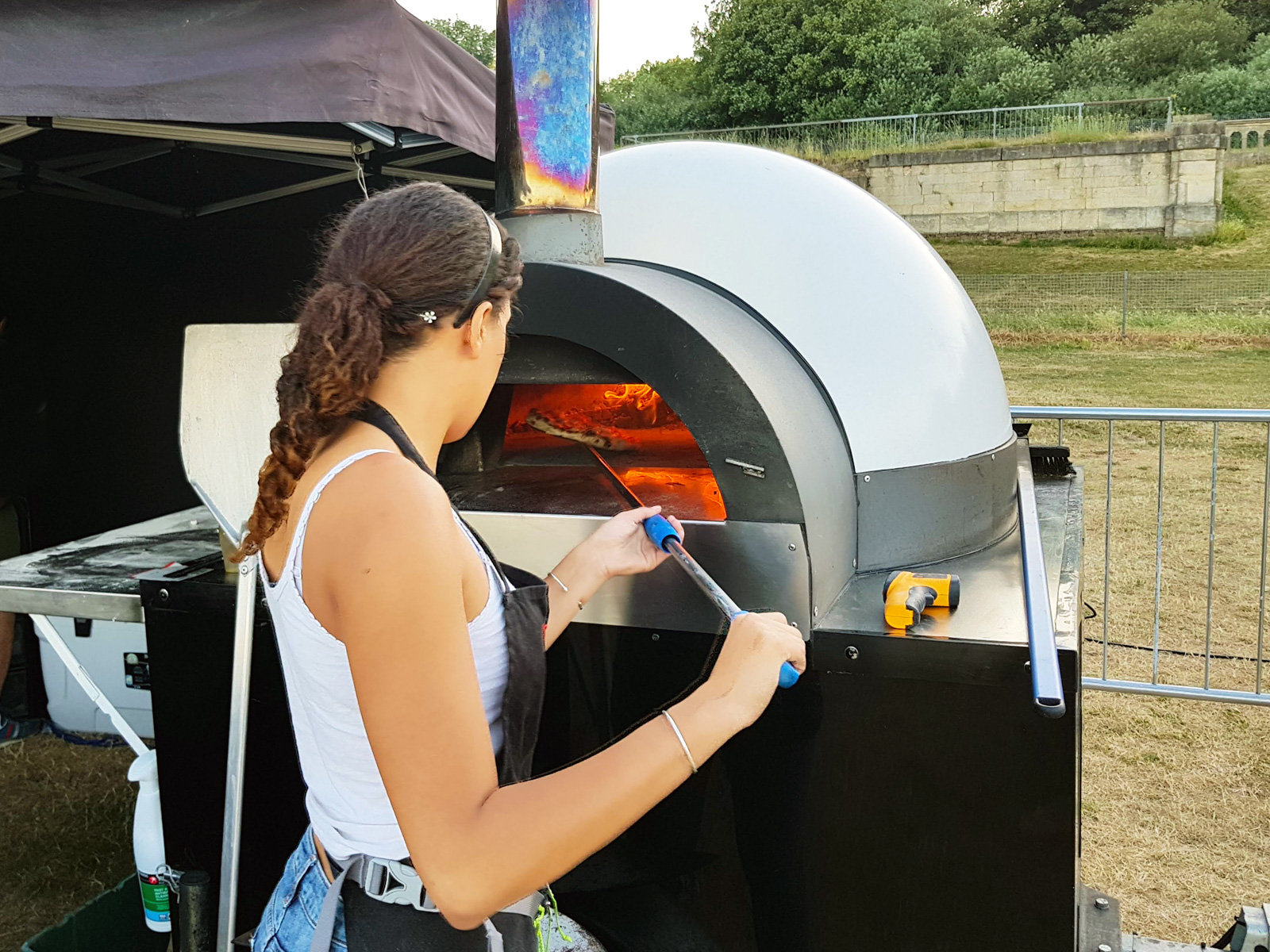 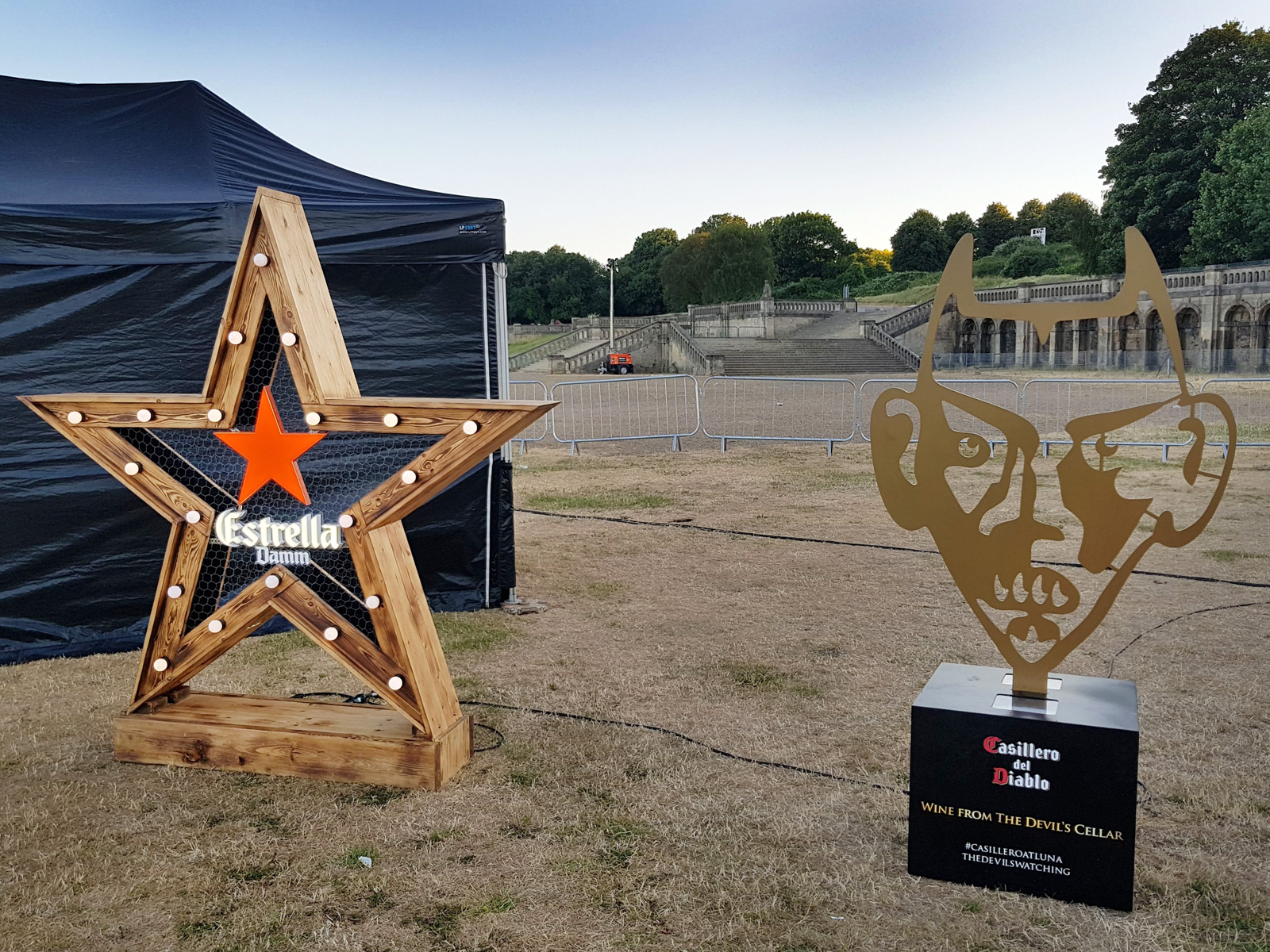 There are drinks partnerships with Estralla Damm (beer) and Casillero Del Diablo wine, spirits, cider, prosecco and soft drinks. Pique can provide you with a full picnic basket. FilmBankMedia is the content partner, while Cancer Research UK’s Stand Up To Cancer campaign is the official charity partnership.

What was particularly impressive was the toilet facilities. Outdoor temporary toilets can be an ordeal, as any music festival goer knows, however the lorry-based ones brought in by Luna Cinema were not only clean but even vaguely stylish. There was also, importantly, a handicap accessible toilet facility. It seems nothing is overlooked by the Luna Cinema.

The only scary surprise that evening was just how much of John Hugh’s dialogue from “The Breakfast Club” this reviewer remembered by heart. Arguably the film is iconic – even with Molly Ringwald’s recent post-#MeToo change of heart about the sexual politics of the film – but even so one does not expect to be able to do movie karaoke to quite this extent. I squarely blame 1980s VCR re-watching.

As we left the Luna Cinema pop-up screening site (dutifully taking our rubbish with us), we felt an affinity with the teenagers on screen made to spend their weekend together. Unlike them it was not detention, since we paid for the privilege, but together we found a camaraderie. We may be older and our paths might not cross again, but as a strawberry full moon rose, the entire audience knew we’d been brought together for something special. While Crystal Palace keenly waits for the Everyman Cinema that has been promised to open this October – after almost a decade-long battle – the Luna Cinema proved a welcome way to experience movie magic on the hill.