With Pathe Tuschinski being our first Cinema of the Month in Amsterdam, for our second we switch from one of the most historic and beautiful theaters, to one of the city’s newest and most hip. Despite its name FC Hyena is not a football club, but Holland’s first boutique cinema with a restaurant and wine bar. Having opened at the end of 2016, the cinema has already built a loyal following – which it needs, given its unusual location.

Regular visitors to Amsterdam could be forgiven for never having come across FC Hyena. The cinema is situated in the former industrial Noord area of the city, across the IJ stretch of water from the Centraal Station, and was only reachable by a (free) ferry, bus, taxi or a long cycle ride. This changed with the opening of the North-South Metro line this summer, which connects Amsterdam Zuid and RAI in the south with Centraal Station and beyond that Noorderpark, just a 12 minute walk from the cinema. 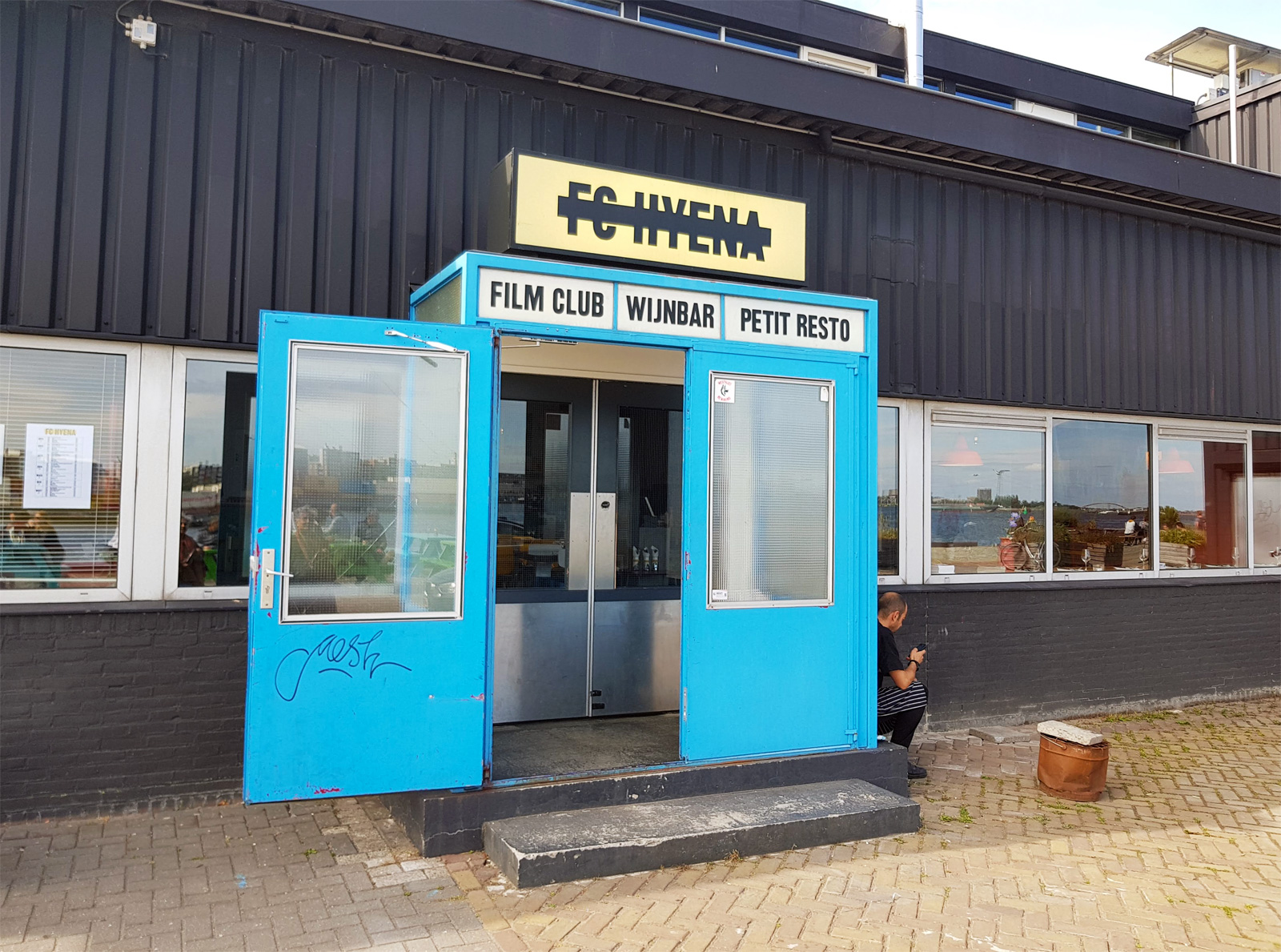 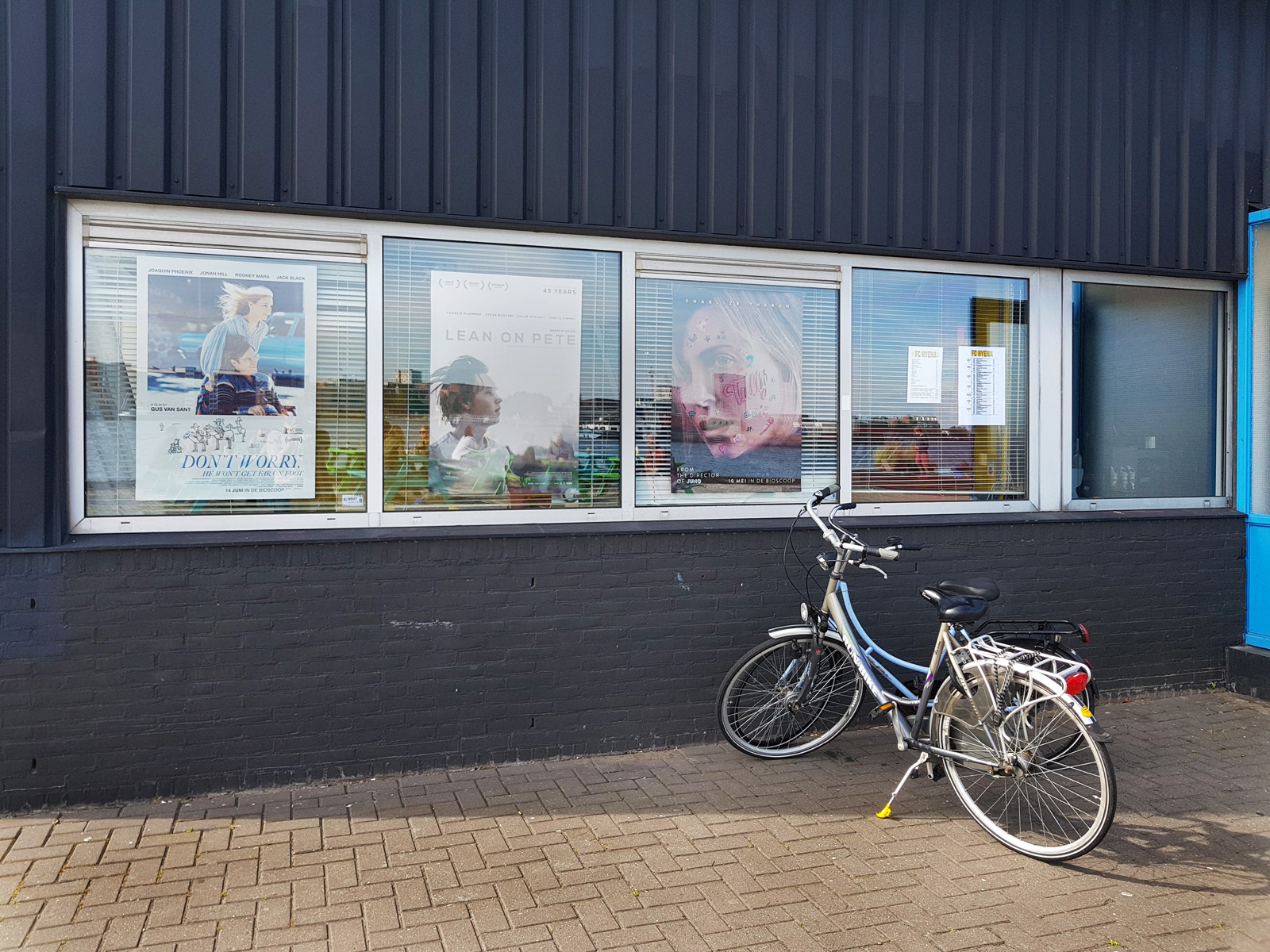 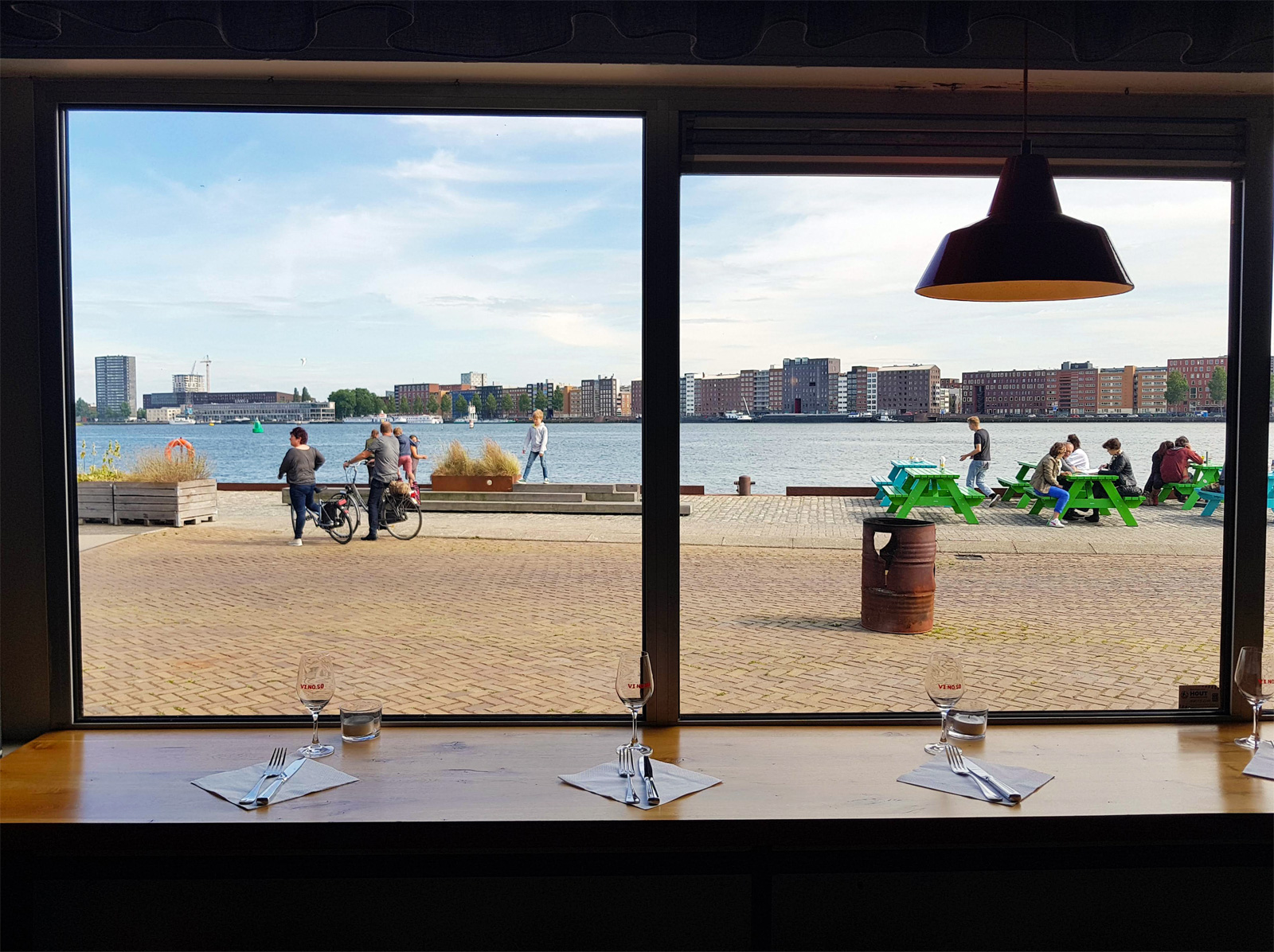 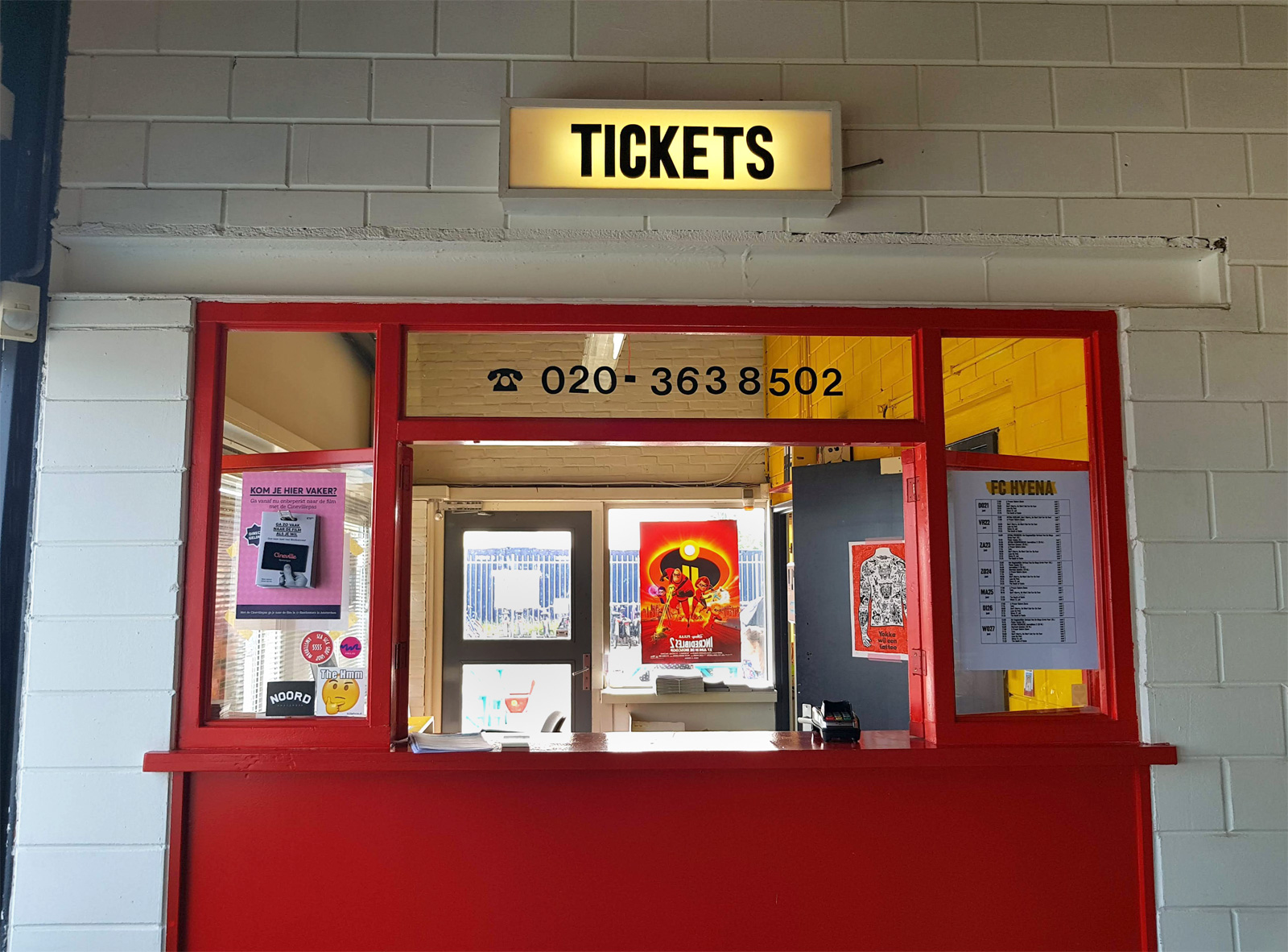 Amsterdam’s funkiest cinema experience is located in a converted warehouse that previously housed M-Lab, a musical theatre workshop space. It is located next to the restaurants Hotel de Goudfazant and Hangar, which both take the concept of ‘industrial chic’ to new heights. Confirming the areas credentials as Amsterdam’s own Shoreditch/Kreuzberg/Williamsburg there is also a nearby skateboard park, the Depot nightclub, an indoor rock climbing gym and headquarters of the fashion brands Sissy-Boy and Varova.

FC Hyena was set up in late 2016 by founders Lotte Smit and her husband Joris Brieffies, who saw the potential for a different type of cinema, one with two auditoriums (55 and 105 seats), but also an ambiance that made you want to hang around both before and after the film. Their inspiration was The Electric Cinema in London’s Notting Hill. They knew that they had to set up a restaurant that could hold its own against the two major restaurants next door, while also offering something unique. To do this they agreed for Goudfazant to operate their eatery, but to make it distinct from their offering next-door.

The centrepiece of the FC Hyena restaurant is the large wood-fired brick oven, where all the hot dishes are prepared, from a menu that changes with the seasons. The menu when we visited included dishes such as roasted cauliflower with almond mole, puffed sweet potato with chimichurri and a traditional Dutch hangop, as well as barbecue ribs with spring onion and sesame for the carnivores. For desert there was marinated fresh strawberry with frangipani and vanilla ice cream. All the wines on offer from the extensive list are organic. 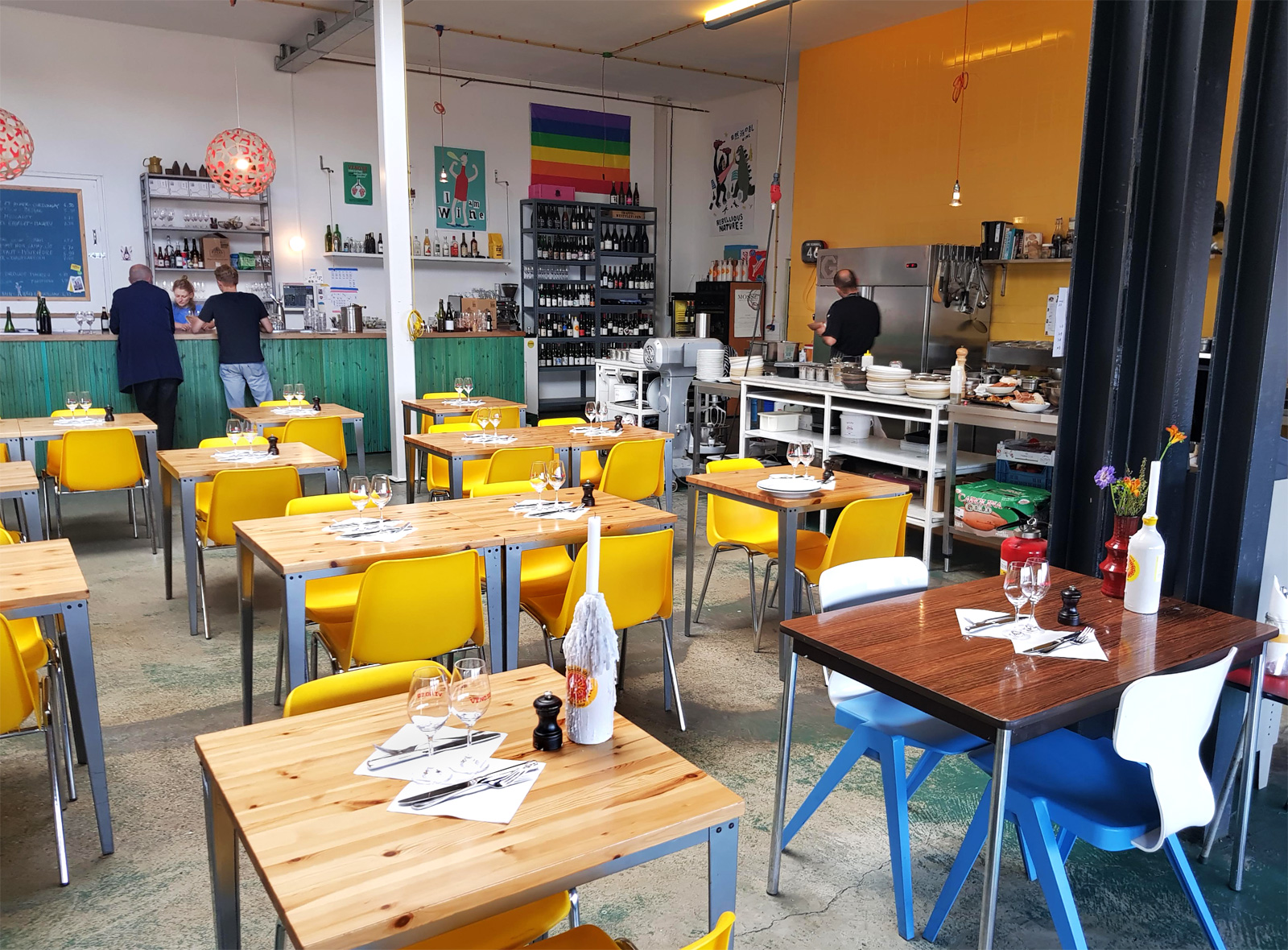 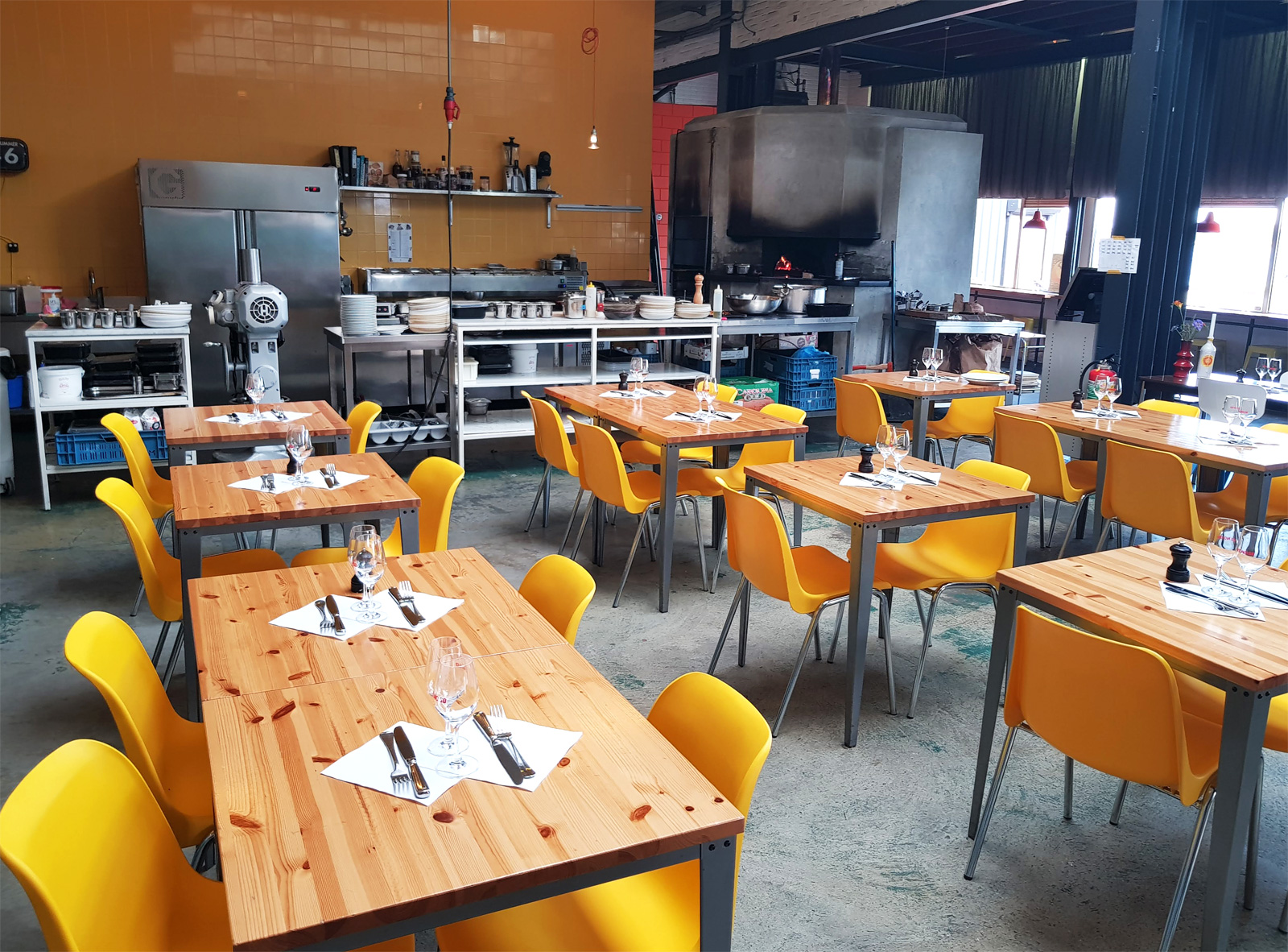 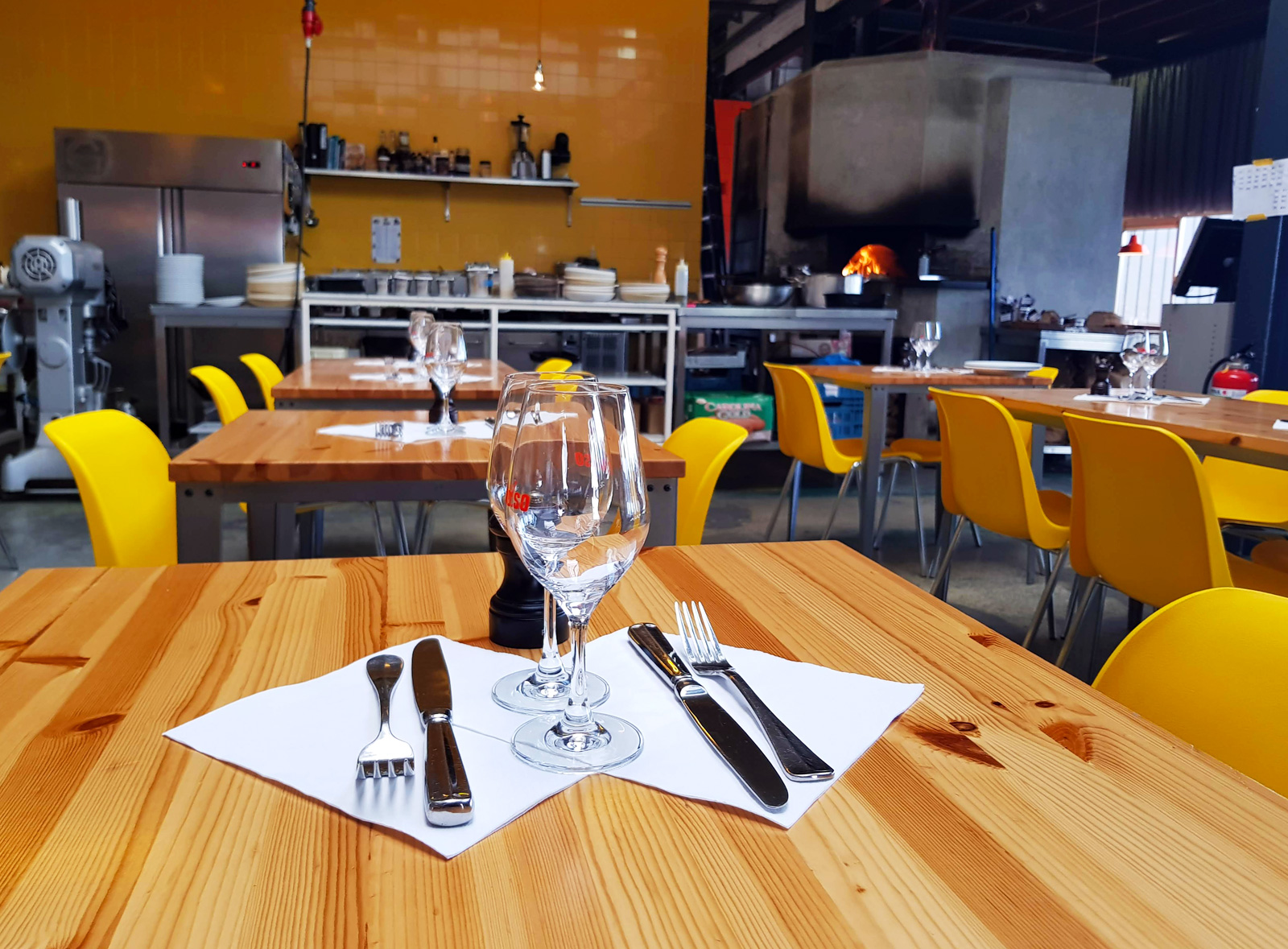 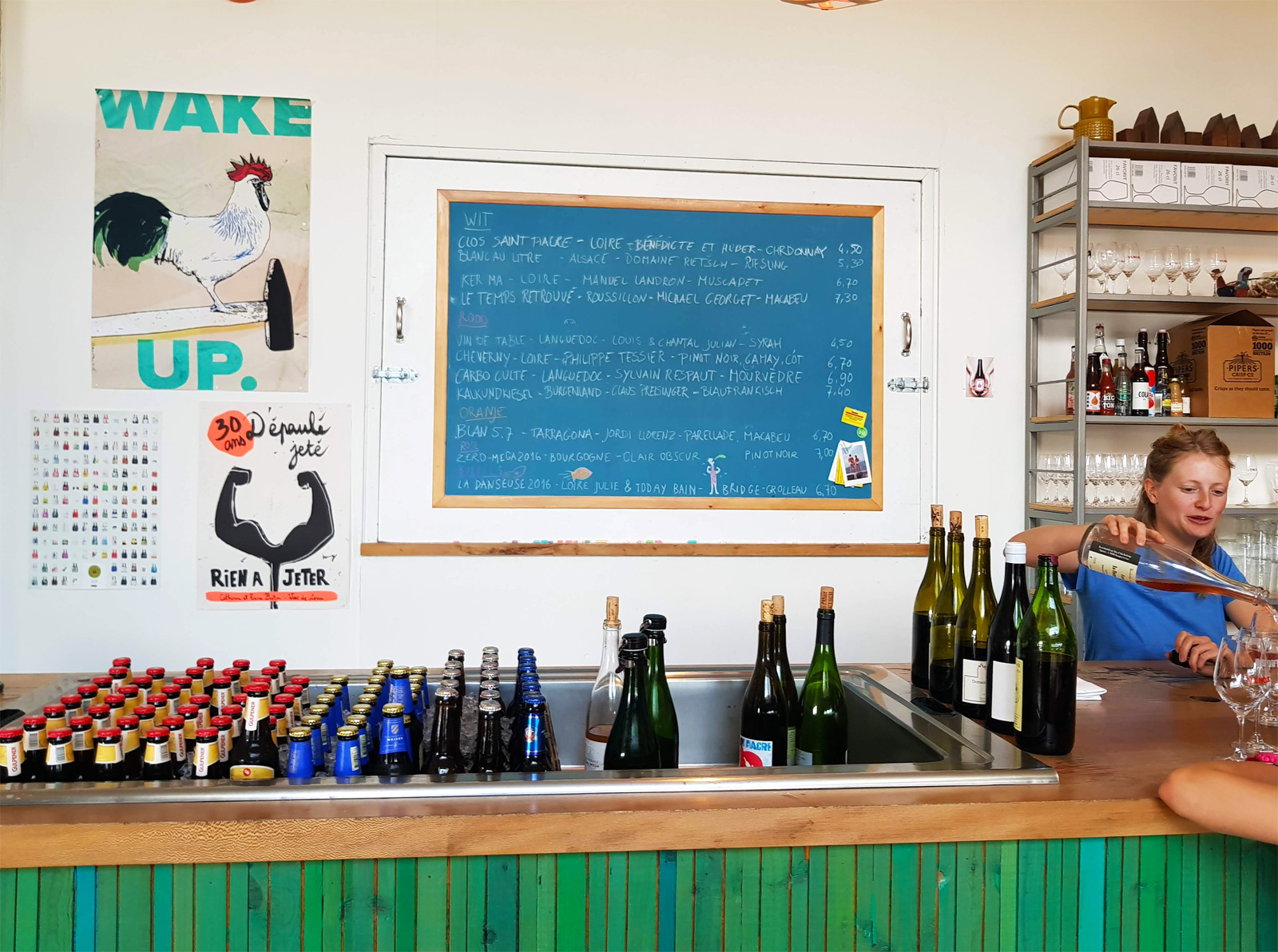 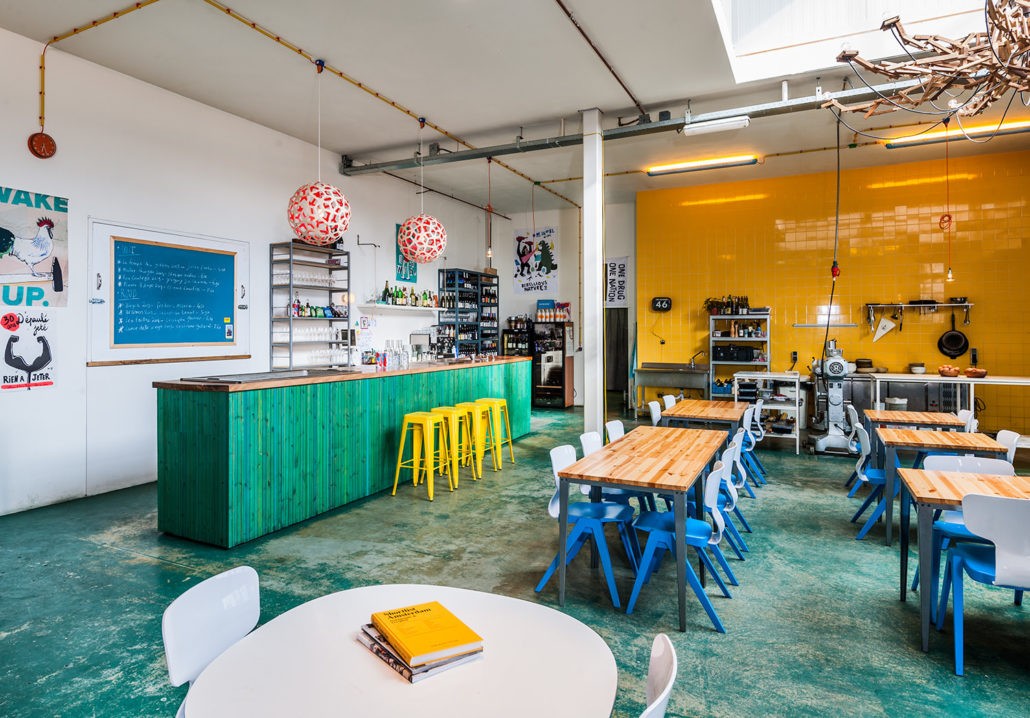 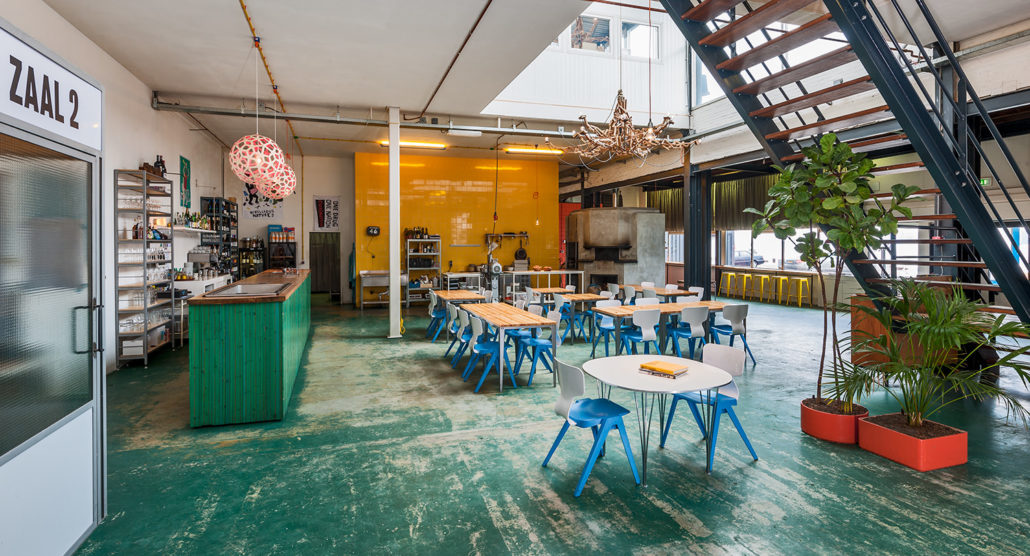 The films shown are a very varied and ambitious mix of art-house, independent, documentaries and international titles, as well as some Hollywood studio titles such as “Tully” (which was playing when we visited), “Adrift” and “Sicario 2”. There are also many special events and screenings, such as ‘Hyena Scream!’ which allows parents with toddlers to come and watch films. During July the cinema showed the Tour de France for free on the big screen, as a companion to the documentary “Time Trial.” It even hosted a pop-up kitchen called New Terrain for an evening about the famous chef Albert Adria (from El Buli). The cinema also hosts workshops and meeting space.

From the outside FC Hyena does not look like a traditional cinema and you might miss it if not for a poster and a sign above the entrance. This really could be the home of a small football club. In the summer the big garage gate is open, revealing the restaurant seating on the left side of the building. The main entrance is a blue door, with the words “Film Club / Wine bar / Petit Restaurant” above it, in the middle of the building that leads to the box office on the left as you come in. Actually if it wasn’t for the box office, you’d think you had entered a hip restaurant as you come in. 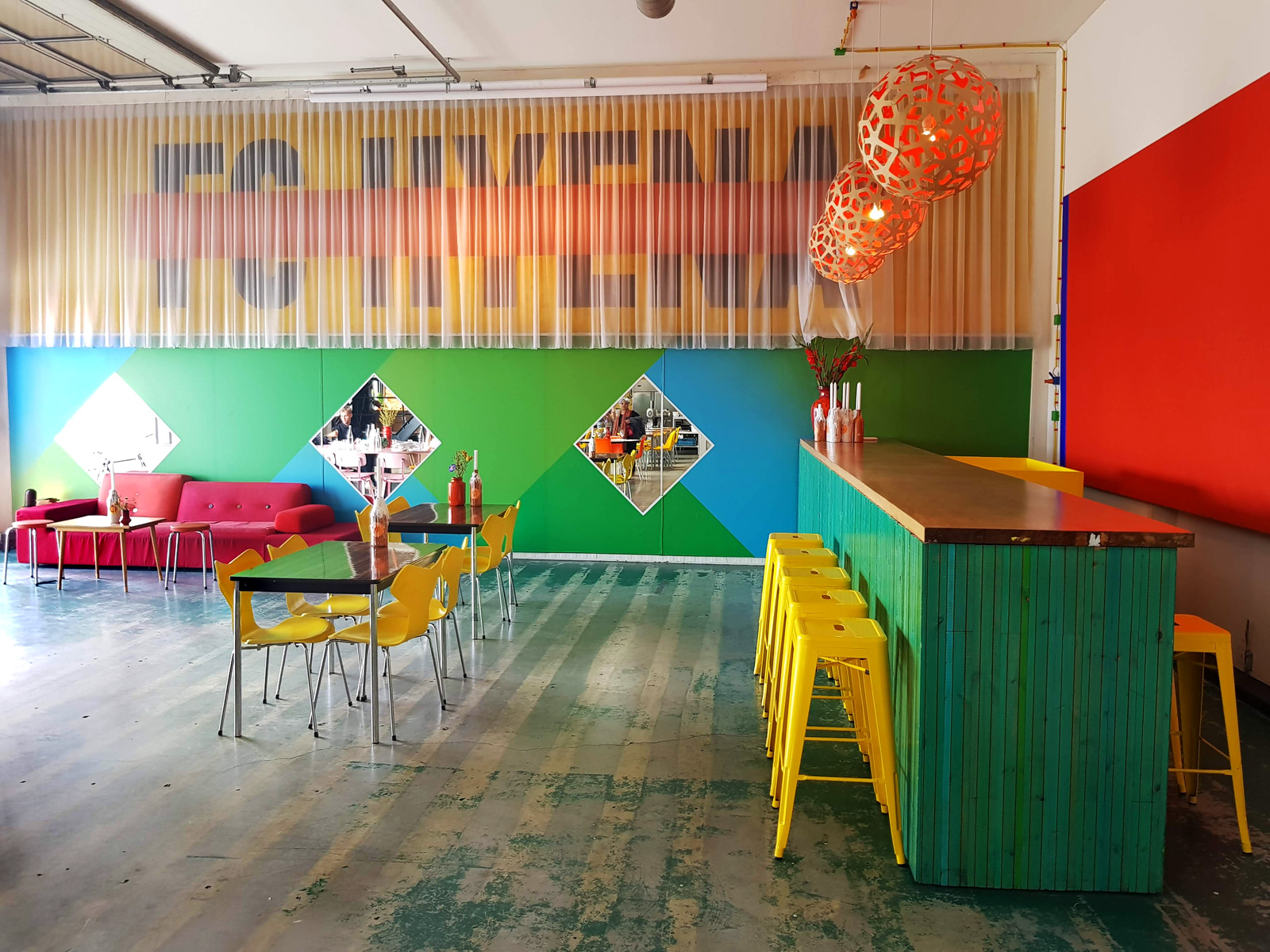 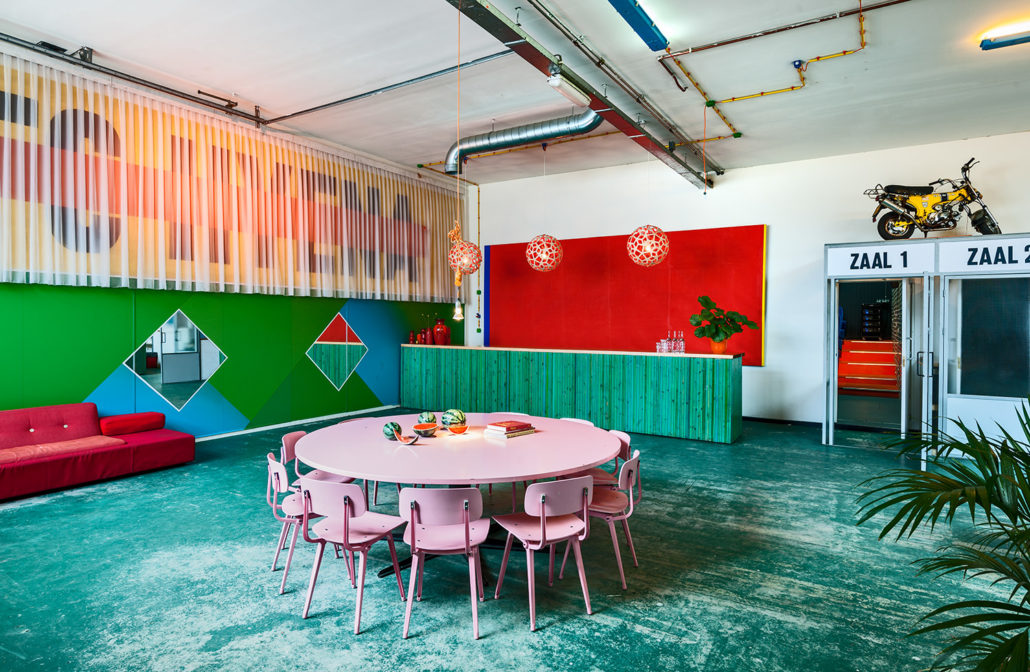 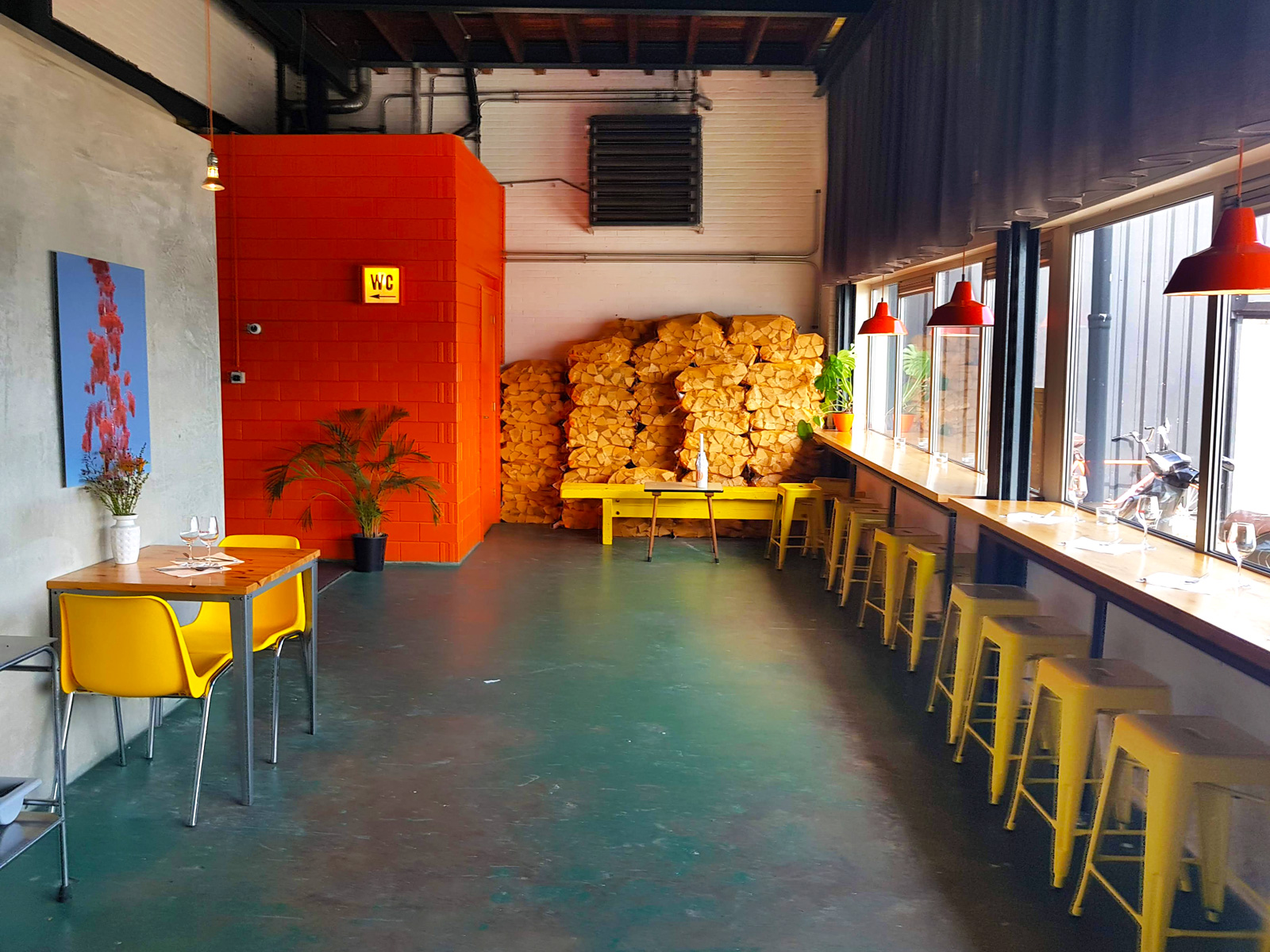 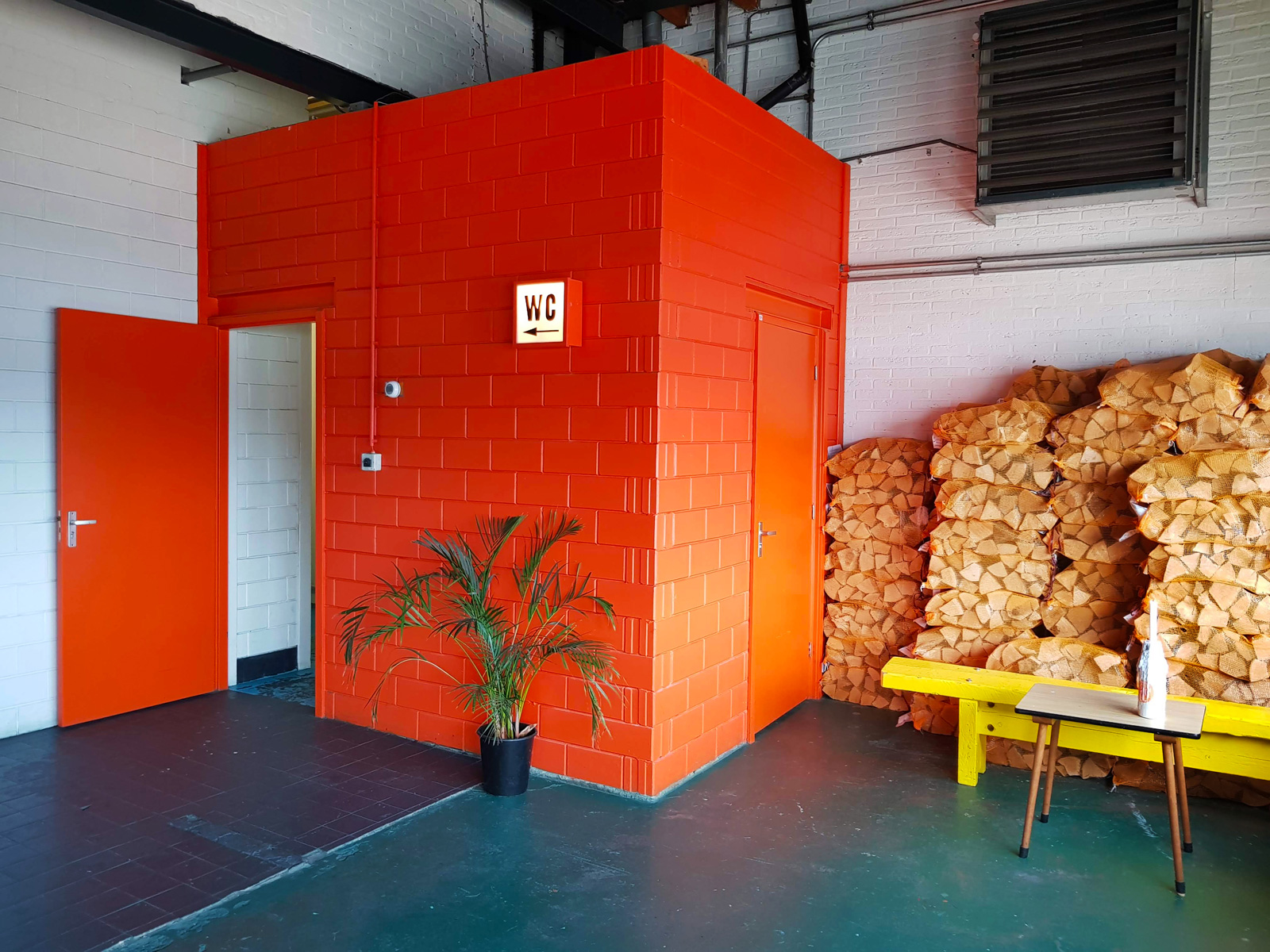 The building is bright and airy thanks to the double-height ceiling and windows on the second floor. The cement floor has patches where the green paint has worn away (more on this later), but what you first notice is the wood-fired brick oven to the right, with the logs stacked neatly off to the side where the toilets are. The tables and decor have the simple quality design that is the hallmark of modern Dutch style. This is a country that was no-nonsense back in its Calvinist heyday and it has kept that design sense even as it’s cycled into the modern age.

The strong primary colours on the floor and walls have an interesting story that tells a lot about the place that manages to steer its own path between the “minimalistic Scandinavian interiors” on one hand, and the “warm luxurious Soho House inspired places”, as told to Petite Passport when the cinema had just opened:

I asked Niels Wouters, owner of Hotel de Goudfazant and last year’s pop up Citroen, who helped with the creation of FC Hyena, about the idea behind it. ‘Well’, he told me, ‘I went to a thrift store and they sold big buckets of professional paint for 1 euro each. We didn’t know which color, but we took them anyway.’ The result is the green floor, the blue bathrooms and the red tone of the world-famous ‘Who’s Afraid of Red, Yellow and Blue’. But we also see some design items like the Hella Jongerius Polder sofa (which moved from Cafe Modern to Hotel de Goudfazant and now to FC Hyena, a real hotspot-hopper) and the blue Ahrend 380 chairs by Studio Ineke Hans.

The green paint on the floor might be wearing away, but the rest of the inspired frugal colour coordination and design has held up well almost two years on.

There is a large wine bar at the back and it is only when admiring it that you notice next to it what looks like two glass phone booths; one right next to the other. But as the signs above them (ignore the motorcycle on top) in Dutch indicted, these are the entrances to the ‘Zaal 1’ and ‘Zaal 2’ (or auditoriums 1 and 2) of the cinema. However, the bar invite you to linger and admire the posters, artwork, rainbow flag and a wall full of football cards as you order a glass of wine and decide whether you want to eat as well before the film.

The reviews on travel websites back up the initial great impression, with Tripadvisor’s 13 reviews giving it mostly ‘Excellent,’ a few ‘Very Good’ and nothing below. Comments include, “The limited menu contains very tasty dishes that are ideal for sharing,” “don’t expect popcorn and jumbo sodas, do expect homemade cakes, great coffee and craft beers,” and “delicious small plates from the wood-burning oven accompanied by a modest but stellar wine selection.” 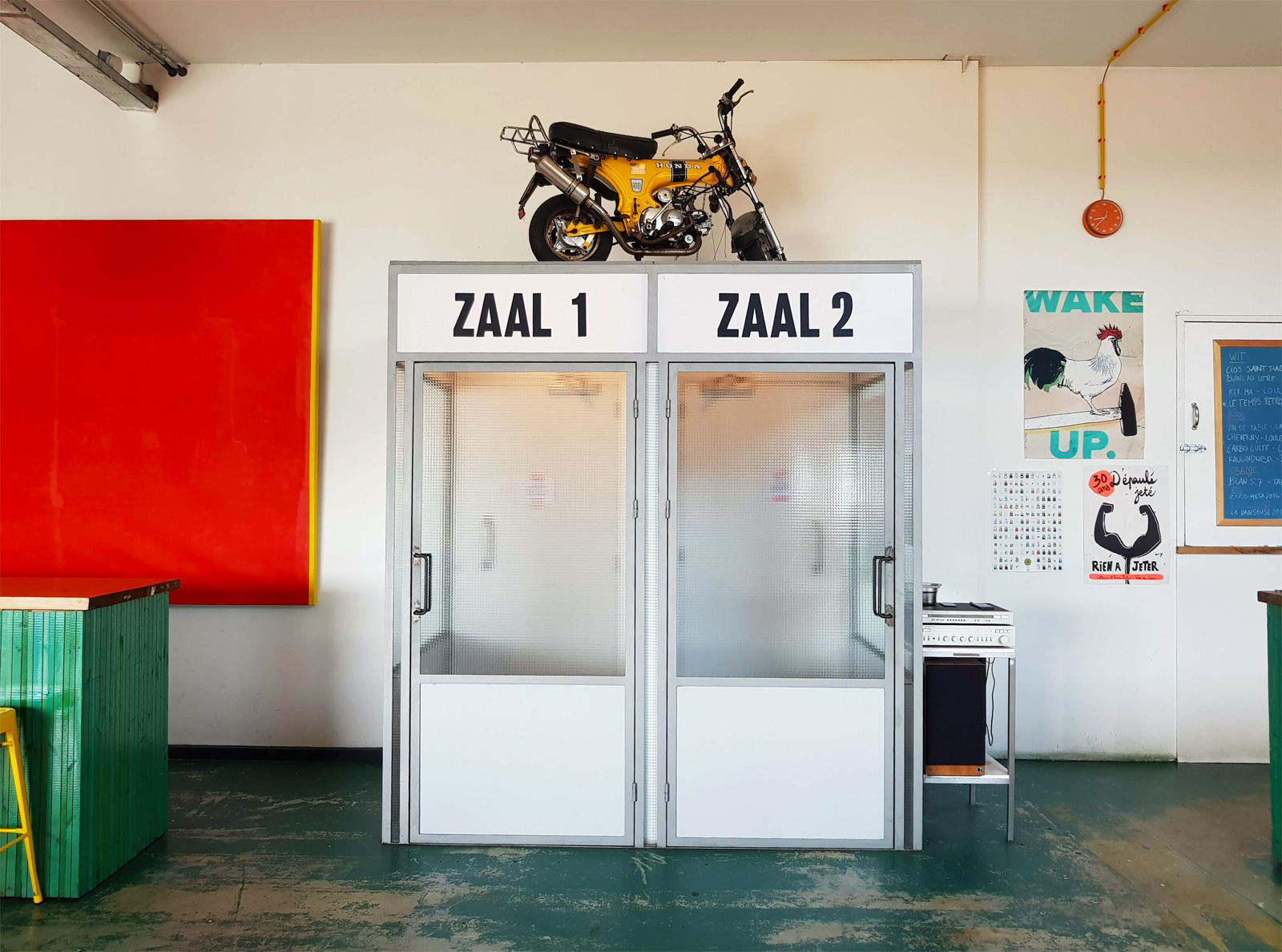 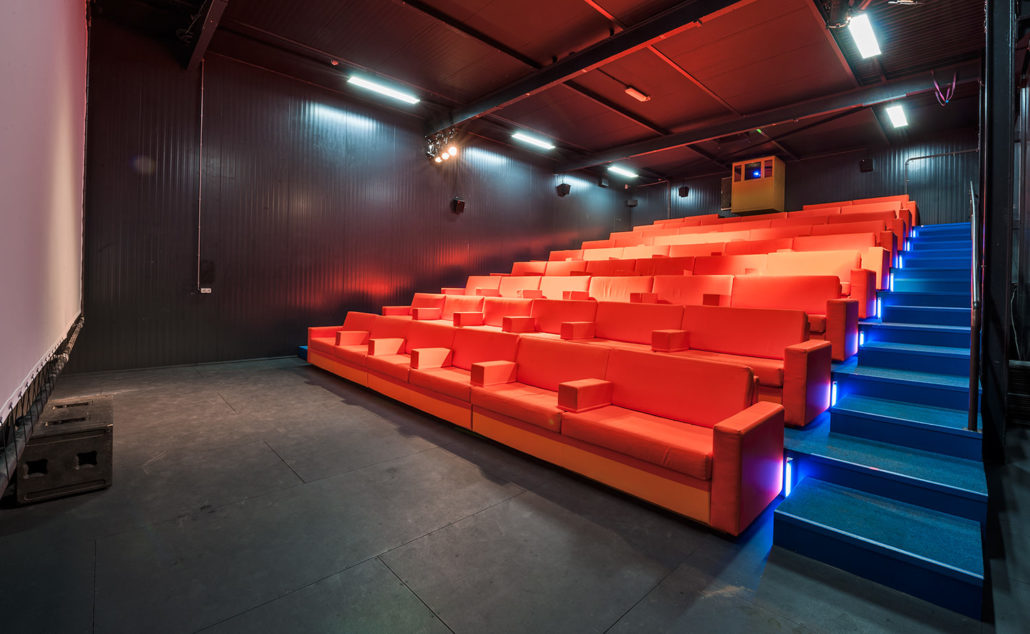 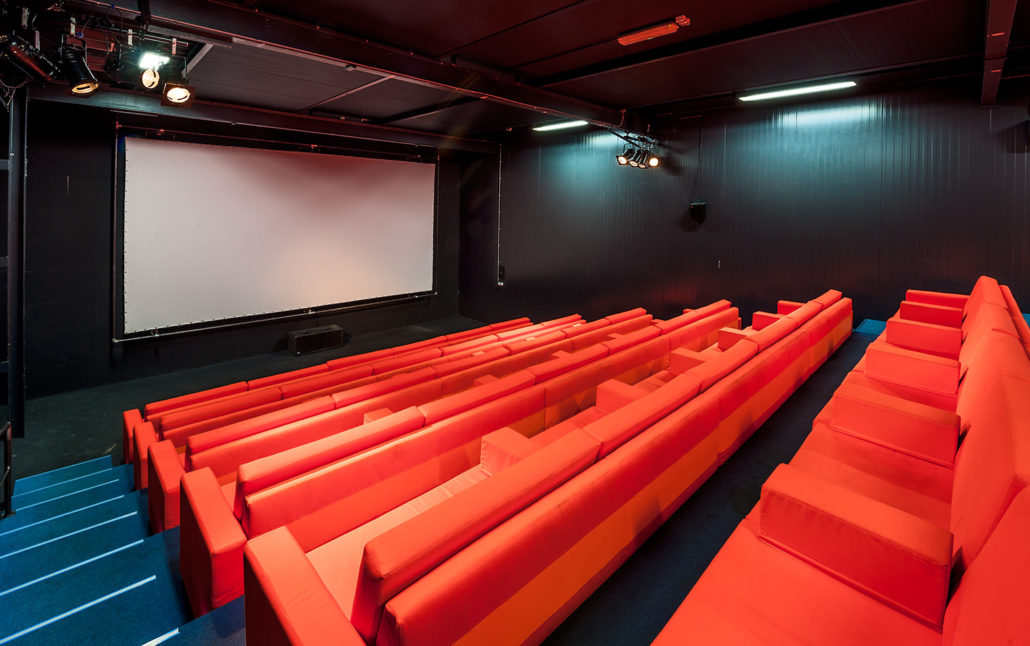 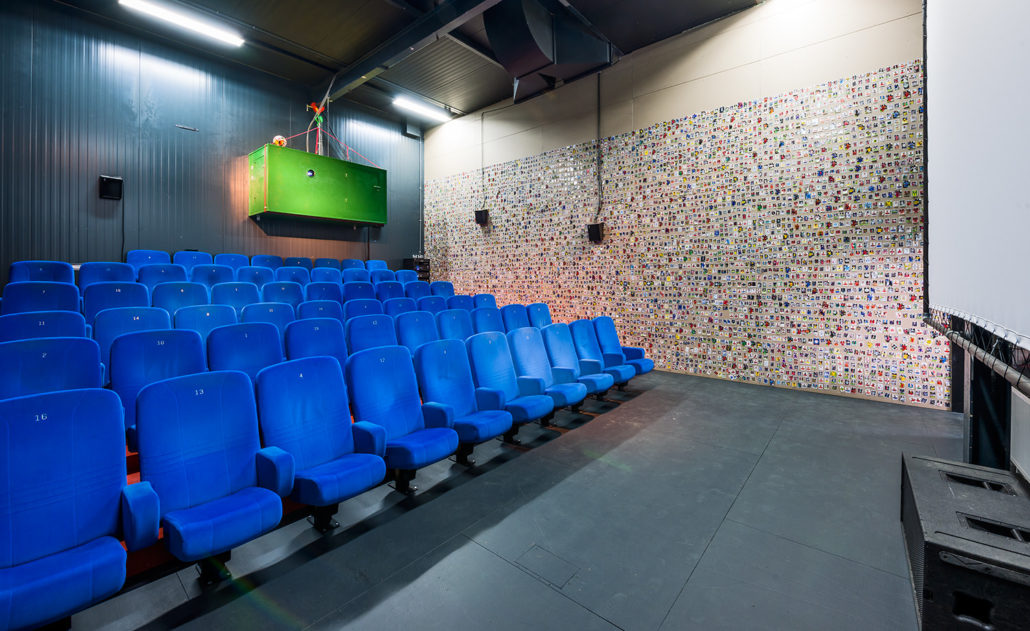 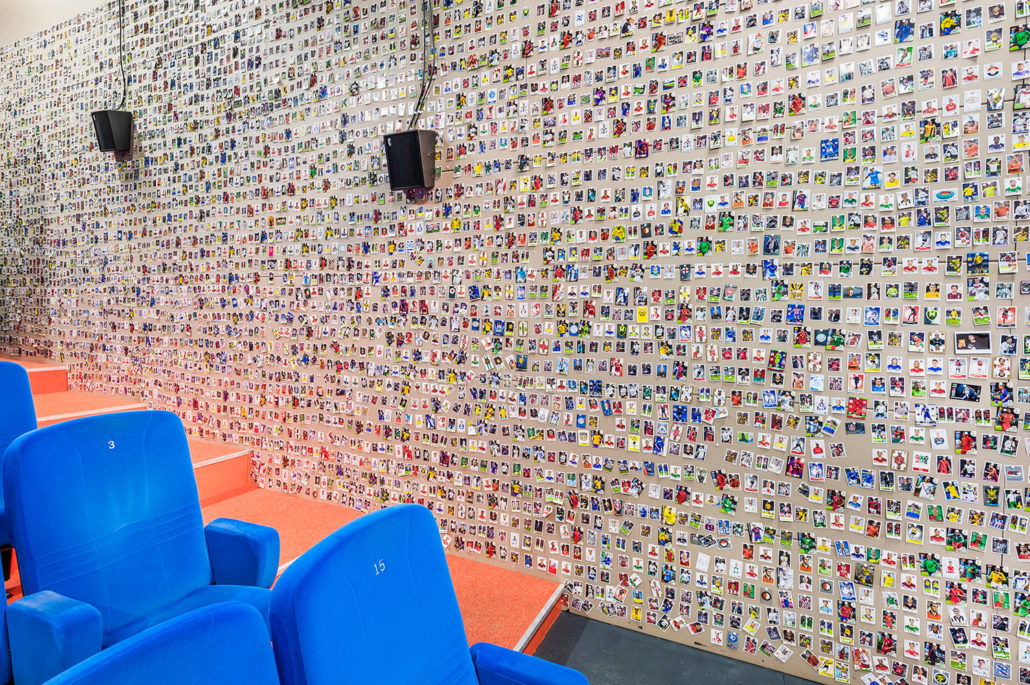 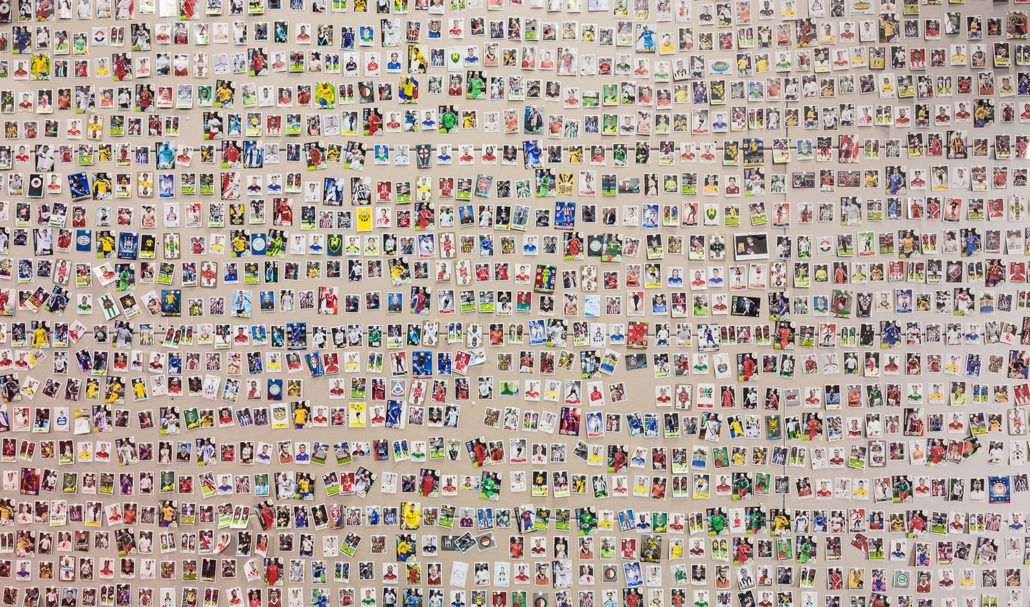 You can of course take your food and wine with you into the auditorium. Just don’t expect in-cinema service or electric recliners. It’s not that type of experiential cinema. Instead of seats the larger screen has long benches, covered in plush fabric, that allows up to 15 people to sit together per row. This cinema wants you to enjoy being social. The smaller screen has 55 recycled blue chairs where the numbers don’t match – intentionally.

Being a converted warehouse you would worry that the space does not lend itself to a good cinematic experience, but the installers have done a good job with both sound and picture. There is a free wifi available and the toilets are well maintained.

Weather permitting, the best way to end a visit to FC Hyena is with a glass of wine, sitting on the benches outside and overlooking the IJ waterways, with its boats, ferries and barges passing. FC Hyena might lack the history, architecture and central location of the Tuschinsky, but it more than makes up for it in charm, ambiance and a curated selection of films, food and wine. No wonder its followers are as passionate about the cinema as if it was an actual football club. With the opening of the Metro link and station, that fan club is no doubt set to grow significantly.