Cinema box office in the United States overtook home video retail spend in 2017 for the first time in over 20 years. Let the significance of this monumental shift sink in for a moment. Cinema, through theatrical releases, is effectively now bigger than any other stand-alone film consumption platform.

Despite the slight fall compared to the previous year, cinema going is thus once again the biggest revenue stream in the Us compared to home video retail, rental and streaming. This marks a significant reversal of fortune since the days when home video, driven by the massive growth of DVD in the late 1990s and 2000s, represented around half of a Hollywood films’ lifetime earnings.

This total breaks down as follows:

While the DEG report claims that 2017 U.S. box office was USD $10.51 billion, it was in fact around USD $11.1 billion, which is down on the record year 2016, but still only the third time it has ever crossed USD $11 billion. This means that people in the U.S. spent more on going out and buying cinema tickets for films than they spent buying or renting films or TV shows. But what about DEG’s claim of USD $20.49 billion total home entertainment spend?

The USD $20+ billion figure was arrived at by adding USD $9.54 billion from subscription streaming (SVoD), which together with VOD and electronic sell-through meant total digital spend was USD $13.66 billion. However, the disclaimer attached to the SVoD figure is: “SVoD includes bundled and unbundled services, representing a larger cross-section of SVoD activity than was reflected in previous reports.” (emphasis added) So rather than just counting Netflix and Amazon Prime Video, DEG appears to have now also started counting Hulu, HBO Go, STARZ On Demand, etc. That is how SVoD miraculously jumped 31.5% year on year. 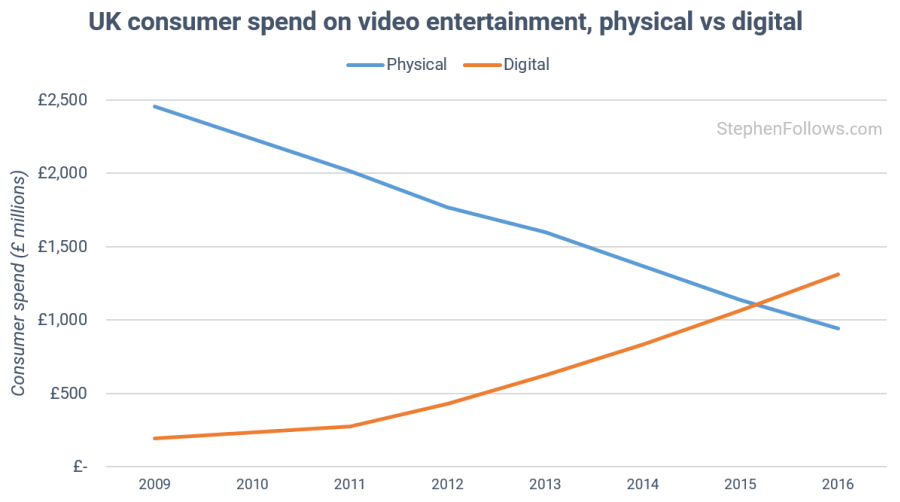 What is most striking is the continued decline of physical video (a global phenomenon, as witnessed by the chart above detailing consumer spend in the United Kingdom), with sell-through packaged goods (DVD, BluRay, etc.) down -14.10% year-on-year, while brick and mortar rental was down -20% and kiosk rental dropped -16.05%, roughly the same as physical subscription (down -16.93%). Electronic sell-through (iTunes Video et al.) was only up 5.74%, meaning that if DEG had not taken a more ‘generous’ view of SVoD, the overall market could very well have declined in 2017 compared to 2016.

None of this comes as a surprise to industry observers who know that the days of the DVD cash cow are well and truly over, with neither Blu-ray/4K, Netflix, Amazon or iTunes growing enough to offset this collapse. DEG tries to see the silver lining, pointing out that iVOD grew 11%, that 14.6 million 4K UHD television sets were sold and eight million households have 4K UHD playback devices. Yet most of the latter are game consoles not necessarily used to watch 4K films.  With 267 4K titles selling USD $147 million worth of discs, this is a drop in the ocean compared to the 97 million Blu-ray households and USD $4.7 billion total still spent on physical discs.

So when considering consumers that paid for an individual title, box office thus outperformed home video for the first time in about 20 years. U.S. box office is now larger than physical retail, rental or streaming, unless you pile all three on top of each other and include traditional broadcast streaming services as part of it to boot.

Yet cinema owners and trade bodies know better than to crow about the re-found supremacy of the cinema release window as a revenue earner, particularly for the Hollywood studios, because the collapse of the DVD market without Blu-ray or EST offsetting it means that there is less money for studios to invest in new productions. Yet the news is still welcome for U.S. cinema operators as a silver lining in a time when too many headlines have focused on low attendance or how the box office for 2017 declined from the previous year.