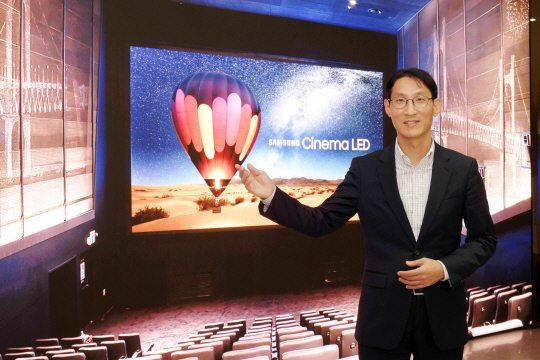 Celluloid Junkie is at CineAsia in Hong Kong this week. Hope to see many of you there.

Korea (Republic of, South) – Samsung is expanding its cinema efforts to include all screens and displays in and around cinemas, other than its Cinema LED screen. Kim Hyung-jae, director of commodity strategy at the Samsung Electronics image display division, told the Seoul Economic Daily on October 10 that, “We will develop the total solution business to supply almost all the displays in the theater so that the Cinema LED can attract the audience.” The move is part of the strategy of Samsung to offer a ‘total experience’ in the cinema. Sedaily (KR) – 10 December 2017

USA – Box Office Magazine’s Daniel Loria looks at the market for luxury cinemas in the US – and finds a lot of influence form abroad. The article looks at the efforts of Kinepolis, iPic, Cinemex/CMX, PVR, Regal and others. There is no one-solution-fits-all model but it is encouraging to see the range of experimentation and trials in providing customers with the best in F&B, technology, services and experiences. BoxOfficePro – 7 December 2017

Korea (Republic of, South) – A judge has ruled that Korea’s major multiplex chain are obliged to provide access for audio or visually impaired patrons. The 28th Division of civil affairs of the Seoul Central District Court found in favour of four people with visual and hearing disabilities in a lawsuit against Sejibu, Lotte Shopping and Megabox. ‘Barrier free’ versions of films with subtitles are typically only screened once a month. Hani (KR) – 7 December 2017

Germany – Could a MoviePass type of service launch in Germany? The two largest cinema chains already offer their own ‘unlimited’ schemes: Cinemaxx has Gold (400 euro for a year) and Silver Cards (250 euro for six months) while UCI’s Unlimited Card is 22,50 euro per month. UCI says that their schemes leads to higher average attendance and benefits small and medium-size films that might otherwise not get a look-in for the blockbusters. HAZ (DE) – 7 December 2017

South Africa – Ster-Kinekor is investing another alleged robbery of its customer, this time at Eastgate mall. EWN – 5 December 2017

India – The Hindu newspaper looks at how India’s older single-screen cinemas are revamping to better compete with multiplexes and to avoid closure.

For instance, the Devendra Theatre near the municipal office has now been transformed into CS Cinemas, whereas PGR Cinemas and the Sandhya Theatre are the other entrants into the scene, boasting of 4K Cinema, Dolby Atmos (moving sound via audio objects and overhead speakers), pleasant ambience, seating etc.

Comfort, quality, snacks, A/C and online booking are key customer requirements, according to the operators interviewed. The Hindu – 8 December 2017

USA (ME) – Small town cinemas in Maine are switching to non-profit status to stay alive, as they re0inent ho they do business. “The Strand in Rockland, The Grand in Ellsworth, The Alamo in Bucksport, The Criterion in Bar Harbor, The Center Theatre in Dover-Foxcroft and Railroad Square Cinema in Waterville are just a few venues that have made the jump.” The Colonial couldn’t find a buyer even at the knocked down price of USD $1.6 million and despite the 105-year old cinema being profitable, so it may re-emerge as a non-profit. Bangor Daily News – 10 December 2017

UK – DenOfGeek asks whether it is bad manners not to sit through the credits of a film in cinema – and not just to catch that Marvel Easter egg. The first reason to do so is that a lot of people put their efforts into the making of a film and not just those like the director whose name flash up before the film typically. But that can be a loooot of VFX artists.

The other reason is even more interesting:

Secondly, staying put allows the audience time to digest the film and let it settle, the same way a devoted reader might sit for a few minutes contemplating a book they’ve just finished. How much you might feel a film requires a few minutes of emotional recovery and thoughtful contemplation does depend a little on the type of film

What was the last time a film had such an impact on you that you sat to the end of the credits. For me it was “A Ghost Story” at Singapore’s The Projector recently. Worth reading this article in full. DenOfGeek – 11 December 2017