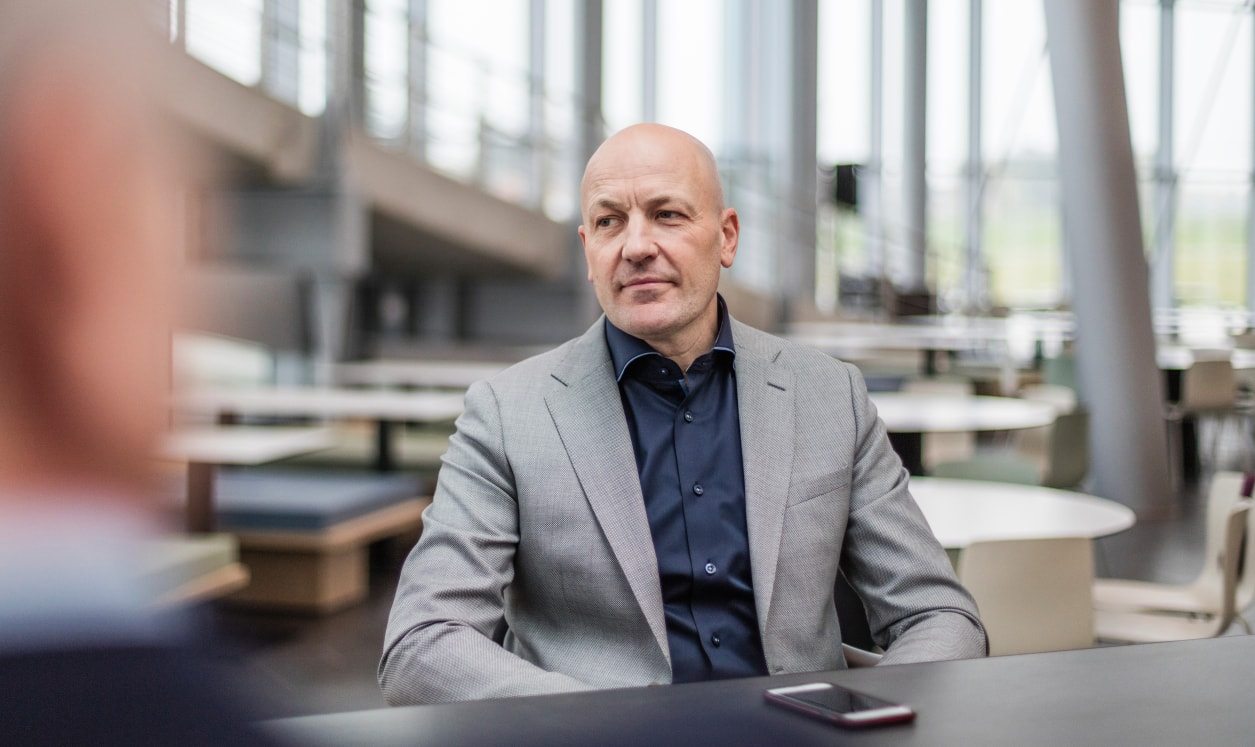 Barco has just announced the creation of a global cinema joint venture (JV) for enabling the roll-out of the next generation of cinema technologies and experiences. Celluloid Junkie spoke exclusively to Barco’s currently SVP of the Entertainment division Wim Buyens a day after his returns to Europe from China, where he signed the deal creating the venture, and before he flew off to the United States to set the JV in motion. For those interested in the announcement itself they can read the full press release HERE.

Where do you go after capturing over 50% global market share in projector installations and there won’t be a second round of virtual print fees (VPFs) from Hollywood studios to pay for the next generation of cinema technology upgrades? Talking to Barco’s newly appointed CEO of the New Cinema JV Wim Buyens, it is clear that the company has realised that the next ten years will be nothing like the past ten years in digital cinema, which is why Barco has initiated a joint venture with China Film Group (CFG), Appotronics and financial institution CITIC to effectively fund the future of cinema.

“We have to do something different, we have to think about what is the next big thing that is going to happen. We believe as people want to get more and more engaged, we think it is going to be more and more experiences, differentiating experiences. We do believe from our perspective that the moviegoer will keep on going if we as an industry can embark on this. But we also need to make it available, what I would call accessible and affordable,” Buyens says.

This meant that the industry as a whole, and Barco in particular, had to “come up with more innovative and creative business models in order for the industry to move to the next generation. We looked at the whole equation and we said we want to help driving this industry, we want to take a more leading role, not just market share, of projectors, but how can we help the industry move successfully forward,” Buyens confirmed.

Barco had previously taken steps in this direction coming up with integrated solutions and next-generation technology propositions such as Barco’s AuroMax immersive audio, Barco Escape three-screen immersive cinema and Barco Lobby solutions. But it became clear that while technically dazzling, these wouldn’t sell themselves. (Tellingly the new cinema JV’s slogan will be “Experiences. Delivered.”.)

So Barco set about finding which partners share this vision and ambition. “That’s how we then came together the four of us,” Buyens explains, hinting that the JV partnership has been gestating for a long time without going into specifics. “It wasn’t yesterday,” he jokes, “there is a long term vision. We see the business is at a pivoting point. We want to be helping the industry, guiding the industry, by making things available and affordable. And making sure that in 10-20 years from now we have a flourishing film industry for movie goers, offering them a palette of experiences.”

Having signed the agreement on the 1st of December in Beijing, the JV next needs Chinese government approval. CinemaCon 2018 in Las Vegas is when the JV will formally kick off, which is also where the formal name of the Barco+3 JV will be announced. There is an existing legal name, but this is not what the JV’s ultimate commercial name will be.

What has been announced is that it has USD $100 million in funding capital to start with. In Buyens’ words, this is to “drive the business model and be an active party together with customers, which is the exhibitor community.” The JV will have its registered headquarter in Hong Kong, with multiple regional legal entities, including HQs on the US West Coast and in Europe (Belgium – no surprise). The scope and focus will be global, except for Mainland China, where the company will continue with the existing JV called CFGBarco.

The JV will be controlled 55% by Barco, with two equal shareholding proportions of 20% for China Film Group and Appotronics and a smaller 5% stake for CITIC. “Because it is a separate dedicated entity, I have been asked to take on the CEO role,” Buyens confirms, but “we will have a dedicated team for this JV. Lots of people will be interfacing with co-shareholders and very much using existing Barco talent that we have, so you will see a lot of familiar faces and names.”

Part of this is driven by the current consolidation amongst cinema majors, which Buyens sees as proof that “change has to happen” because customers want more holistic partners for years to come. “We have to play into that trend,” he believes. “Many successful companies have great histories but forget to take important steps for tomorrow. We are pround to have earned over 50 per cent market share,” Buyens affirms, “but if we continue doing exactly the same we will not continue driving and being ahead of the curve.”

However, Buyens is keen to stress that as far as customers are concerned, there will be continuity of sales, marketing and services. “We will continue supporting customers, they will see same technology and people, but we will extend beyond that,” is how Buyens envisions the future. “We are changing part of [Barco’s] DNA to add influences of the other shareholders and be more resilient for the future by adding other attributes; things which we were less focused on before hand.”

With regards to technologies solutions, it will not be restricted to just what Barco has historically offered, nor will it just be Barco products. It becomes very clear from talking to Buyens that this is not a roundabout way of selling more laser projector to replace the first generation of digital installations. “The journey is not just going to be one thing,” he emphasises. “We are going to see us coming up with multiple things.” Buyens stresses this journey is undertaken based on the reputation and values that Barco has built out in the cinema industry with its people, products and services as well as having the right set of partners “to make this journey together with them…many things will change, but we will make that change together with our trusted industry partners.”

“If I look at what we want to bring to market – this is not the point where I want to get very specific – this is vision and direction.” As Buyens sees it, there will be a “panoply of technology coming from us, driving into some of the solutions aspect of it. We will also embark on delivering experiences consistently repeated.”

“The moviegoer and the stories being told won’t be ours, it will be the creatives, but it will be presented in the best way possible in a holistic view.” The vision for this is everything from premium large format, which CFG has already been pioneering, to potentially also areas such as virtual reality (VR). “People go to certain experiences, but these experiences need to be recognisable. Over that lifetime of technology we want to create reassurance that affordability and accessibility of technologies,” with a strong vision by Buyens that “we can do things differently than what industry does today. The business model allows for that.”

One of the propositions that the new JV will explore is one where instead of customers paying upfront capex for equipment, to a “business model based on usage.” Having completed the ten year switch to digital, “cinemas realise that the future is complicated, that moviegoers are more demanding than ever and that consumers are ‘spoiled’ in the sense that they have all of these technologies at their fingertips.” But, “exhibitors have all these choice and they cannot invest in all the solutions at once. We want to be from the technology side facilitating this, so that exhibitors can be focused on the other elements of the business. This JV is not about creating content or anything like that, but things like immersive sound, HDR, laser illumination all the tech trends we will embrace.” Buyens re-emphasises that the JV will stay within the technology field.

Buyens is also keen to stress that the JV is investing in a broad range of technologies and will invest in it over the next ten years and ensure that it can support these technologies. Moreover, he says, “we are embracing more technologies than we have and we are attracting these [JV] parties so that we can roll out these propositions. We will not just come up with disruptive solutions; that’s not how this industry works.” Buyens comes back time and again to that fact that customers need to have confidence that the technology suppliers will be around tomorrow, and for “that continuity and commitment you have to have credibility and critical mass,” which he sees the JV as providing.

Buyens does not see the new cinema JV getting into areas such as recliner seating, because “the primary piece will be visual and sound piece and whatever sound solution makes sense for customers.” Asked whether that means that customers would have a choice of rival immersive sound formats, Buyens affirms so, “unequivocally and absolutely – they would have choice of Barco AuroMax, DTS:X or Dolby Atmos. It is not our intent that everything has to come from us, but at the same time those experiences could be based on technologies that we bring in” This also extends to solutions by Appotronics and CFG.

There is also the lobby aspect, where Barco has already been active, and Barco even has technology in the professional VR space, though the focus for Barco’s new cinema JV “is not individual experience but social and group experiences. But it could also evolve,” as new entertainment content for VR, augmented reality (AR) and mixed reality enters the market. “We have to be able to think how the theatre of tomorrow will look like and how content enters theatres.”

Barco is not even tied to only looking at projector solutions, given the interest that the Samsung Cinema LED screen – and to a lesser extent Sony’s CLEDIS screen – have been generating. “Whatever it takes,” is how Buyens sees it. “If direct displays is what customers want, we will enable that. If they say we want more affordable solutions, we will be there. Projection is something we do well, but this is a cinema JV, this is not a projector JV. “We are open to other technologies,” Buyens stresses, because he wants the company to be “ahead of the curve and leading rather than being a technology and product supplier. We have earned our stripes; it’s time for the next step.”

As Buyens sees it, ultimately the “customer will have choices.” It is clear that more than selling products or solutions, Barco wants to sell cinemas on the future and to make it an easy choice to make, as much for cinema goers as for itself and its partners.