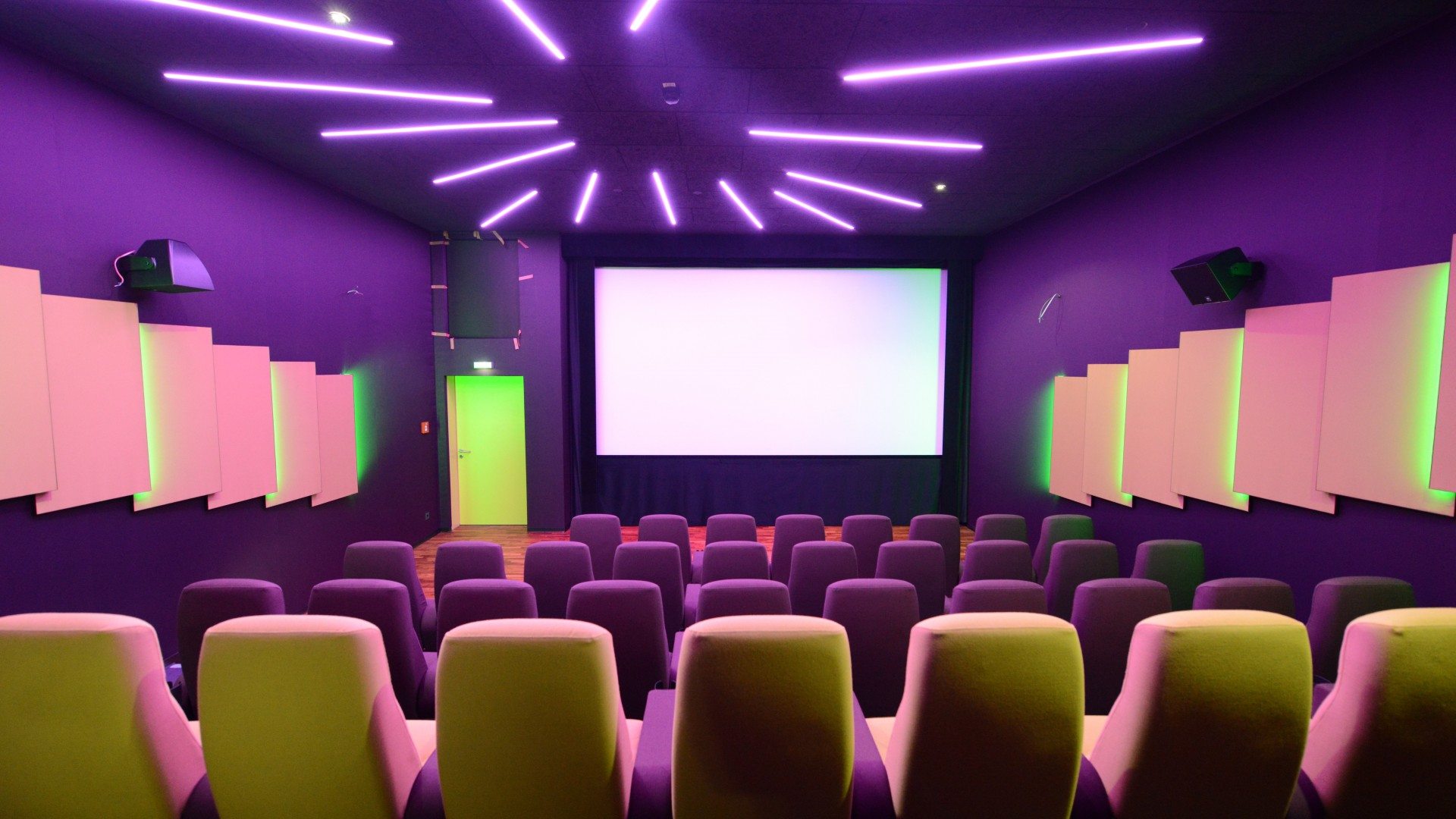 Germany – Yorck hosted the grand opening of its delphi Lux cinema in Berlin on 6 September. The luxury cinema built in the shadow of the Bahnhof Zoologischer Garten station has seven screens and 600 seats. It will show ‘the best of German and European film’ together with American independent. Each auditorium has a different colour scheme and funky design with the inspiration said to be from art gallery showrooms. Yorck has 12 cinemas in Berlin and an outdoor screen, making it dominant in the capital and a force in the German market. The opening will also make up for the closure of the Broadway cinema in 2011 and is part of the revival of cinemas in the western part of town such as the nearby Zoo Palest. BZ (DE) – 22 August 2017

Germany – Work has started on the Cine K cinema in Korbach that will open in early 2018. There will be five screens with 550 to 600 seats, which will have 1.3 meter legroom. There will be 4K projection and two of the auditoriums will be connected to a gallery space idea for drinks or special events. There will also be a bowling alley. Landeszeitung (DE) – 25 august 2017

Germany – Delays for the opening of the Cineplex cinema in B2 Meitingen. The seven-screen cinema in the entertainment complex was due to open in November but now won’t open until next year. It was originally supposed to have open this summer. Augsburger Allgemeine (DE) – 21 October 2017

France – The new Pathé cinema in the Place du Grand Ouest of Paris’ Massy district opened on 20 October. The nine-screen cinema includes a Dolby Cinema, making it the first such cinema in France. Pathé is promising 1.10 meters between rows and loungers in all auditoriums, with duo seating as well. The opening of the cinema is seen as confirming the growing clout of the Massy neighbourhood. Le Parisien (FR) – 19 October 2017

France – Banks have given the go-ahead for the plans to build the Cinevillage six-screen cinema. The 7 million euro project will also include two restauarant, a playground and a laser game area. Sud Oest (FR) – 10 October 2017

Poland – Oh Kino has been revelaed as the new operator of the multiplex in Wroclaw’s Arkady mall previously operated by Multikino. Oh Kino currently operates a four-screen in Myslowice. The operator is focused on multiplexes in town traditionally considered too small to have such operations. Radio Wroclaw (PL) – 22 August 2017

Poland – Cinema City is the other operator to open a new cinema in Wroclaw, featuring the city’s first Imax as one of its 20 screens. It is also Poland’s largest screen and opened 18 October. The sponsored Skoda 4DX auditorium features immersive seating and there are three VIP screens with recliners. Three auditoriums feature Dolby Atmos. And there is of course a generous food area. Eska (PL) – 22 October 2017

Romania – The Electroputere Parc mall in the Southern Romania city of Craiova will be expanded to a cinema, more stores and entertainment areas. The 70 million euro 9,200 sqm expansion will see a seven-screen cinema all-VIP cinema – the first in Romania. It will feature electric recliners, Christie 4K projectors, Vive sound system, and Harkness 3D screens. No word on who will operate the cinema. Romania Insider – 18 October 2017

Romania – A new state-owned cinema will open on the premises of Athenaeum in Iasi, a city in North Eastern Romania. It will be the first state-owned cinema in Romania since 1990, just after the fall of communism. Previously state-owned cinema have closed and new multiplexes have focused on mainstream film, leaving Romania with one of the lowest rates of screening domestic or art-house films. Romainia Insider – 19 October 2017

Holland – Vue is opening a new multiplex in Gorinchem. Vue and the Van der Valk group are said to be eyeing a location in Gorinchem East, that would have six screens and 900 seats. The complex would also include hotel and restaurant. HFN (NL) – 22 August 2017

Holland – The owner of the Atlantic cinema in Harderwijk has announced plans for a new cinema in the new shopping center De Harder on the Flevoweg in Harderwijk. No further details at this early stage. HFN (NL) – 5 September 2017

Holland – Several multiplexes will be closing for renovation over the coming months. Filmhuis Lumen in Delft is closing this week for refurbishment of lobby, seats, restroom, floors and more. Kinepolis Almere will start work on 4 September but will remain open during this time except for Monday 11 September. Pathé Schouwburgplein in Rotterdam is undergoing the most extensive work with work starting on the first two auditoriums. There is also a Dolby Cinema installation and 4DX on the horizon. HFN (NL) – 22 August 2017

Germany – The Comet Cine Centre in Gladbach has been extensively refurbished, with flooring, stairs, lamps, lounges, toilets and more. There is now also a Comet Cafe for sparkling wine and coffee. Even the popcorn has a new recipe that is supposed to make it crunchier. Screen 1 has been equipped with a laser projector at a cost of 120,000 euro. RP-Online (DE) – 9 September 2017

Germany – Cinestar Neumünster re-opened after fur weeks of closure and upgrades, having previously operated as a Cineplex. The operator will continue to upgrade seating in all screens until the end of the year at a cost of 400,000 euro. With just 80,000 inhabitants the city feared losings its cinema, instead the first visitor was treated to flowers. Kieler Nachrichten (DE) – 13 October 2017

France – Paris’ legendary La Pagode cinema is set to get additional auditoriums through excavations beneath the existing screens. The expansion is made possible by the neew owner Charles S. Cohen, who also owns Greenwich Village’s Quad cinema in New York, as well as the film libraries of WC Fields and Buster Keaton. The aim is to re-open the new Pagode in 2019-2020. The previous owner Elisabeth Dauchy refused offers to turn it into a restaurant or shop. Le Figaro (FR) – 4 October 2017

France – Cinéma Royal de Saint-Max is the second cinema in Europe to open with the DTS:X simmersive sound format. The cinema has been a pioneer of digital audio and projection, as well as audio description and subtitling for the hearing impaired. The cinema had to be closed for ten days during the re-fitting, but audiences will not see ticket prices increase. L’Est (FR) – 14 October 2017

France – The Pathé Beaux-Arts in Besançon has become the Mégarama Beaux-Arts. There are no immediate plans for any changes, other than the signage and the abolition of the ‘unlimited’ pass. The existing nearby Megarama already has 550,00 annual admissions, while the Beaux-Arts 250,000 admissions, but it is claimed that there is room enough for both. L’Est (FR) – 17 October 2017

France – The L’Hippodrome cinema in Paul-Desmarets re-opened on 13 September. Carpets and chairs (118 instead of 120) have been replaces and the screen has been elevated to make the reading of subtitles easier. The renovation of the Desmarets cinema represents an investment of € 180,000 aided by a small grant from the National Film Center for small arthouse cinema in France. La Voix du Nord (FR) – 10 September 2017

France – A group has been formed to save Boulogne’s cinema Les Stars, which was acquired by Megarama. Those protesting the plans include a Spanish-language teacher who has been hosting screening of Spanish and Latin American films at the cinema fortnightly. Megarama is said to want to double the annual attendance currently at 240,000. La Voix du Nord (FR) – 19 October 2017

Holland – A powerstation in Maastricht has be re-born as an arthouse cinema. JHK and Verlaan & Bouwstra Architecten created a a six ‘stacked’ cinema that includes cafe bar and restaurant.

The listed building’s trussed ceiling, pipe work and some of its historical fixtures – including enormous windows – have also been left in place, offset by umbrella-style lighting suspended from rails above wooden tables and chairs. Elsewhere theatre spotlights have been installed in homage to the building’s new role.

Be sure to click through for photos of the amazing 500-seat cinema and everything else in this re-claimed gem. The Spaces – 12 October 2017

Holland – Aalsmeer is losing its Cinema Studio. The municipally operated venue is the only cinema screen in the North Holland district. “Cinema Studios Aalsmeer uses the two halls in the same-name event complex: the theater room (780 seats) and The Club (50 seats).” While the cinema was popular for children’s matinees, it did not get sufficient business in the evenings. HFN (NL) – 22 August 2017