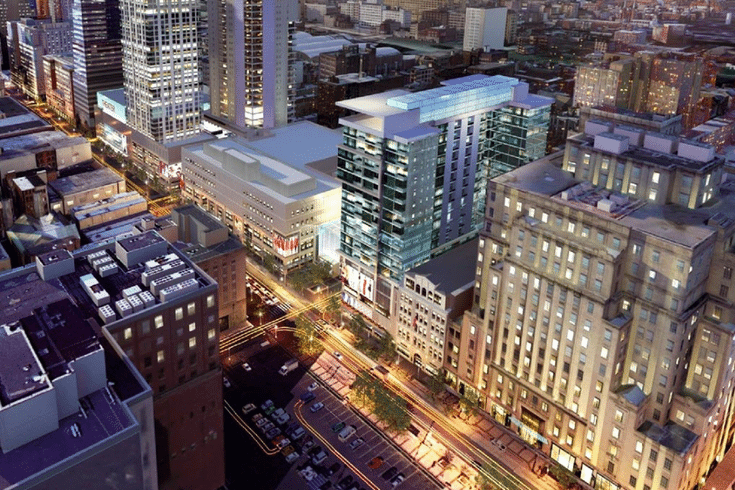 Philadelphia (PA) – The Fashion District Philadelphia is set to get an eight-screen AMC multiplex at the former Gallery at Market East. Set to open in late 2019 the cinema will have recliners, in-seat dining, and the auditoriums with premium format screens (Dolby Cinema and Prime at AMC). It is a sign of the times of AMC building in urban cores as opposed to suburban locations, with city centres being revitalised. The space was vacated by Burlington Stores Inc. moved. Philly.com – 27 September 2017

Sacramento (CA) – Cinemark has announced plans for a multi-screen, dine-in movie theatre at the Howe Bout Arden shopping center in Sacramento. Launching in the summer of 2018 the Century Arden Movie Bistro will feature a full bar and kitchen, seat-side ordering as well as luxury recliners. It will be located adjacent to the Century Arden 14 and XD that opened less than a year ago and is seen as complimenting existing capacity. Business Wire – 6 September 2017

Brookfield (WI) – Marcus Theatres has threatened a lawsuit about the opening of a Silverspot nine-screen cinema at the The Corners project. Marcus argues that itwould violate a development agreement  and that it does not have adequate parking. It would also hurt the business of Marcus’ nearby Majestic Cinema. There are also plans develop a BistroPlex theater and restaurant complex at Brookfield Square mall. Journal Sentinel – 2 October 2017

Dayton (OH) – Cinépolis has opened its first multiplex in the Midwest with the launch of Cinépolis Dayton’s 12-screen complex. The USD $12 million theatre in Austin Landing. The multiplex will also keep night life going longer, as most bars and restaurants shut at midnight, but the cinema has screenings starting as late as 11:30am. There is luxury seating, liquor and hot food, as well as traditional concessions. MyDaytonDailyNews – 14 October 2017

Kalamazoo (MI) – AMC will have a 10-screen cinema in Portage and South streets in downtown Kalamazoo this fall in what was formerly an Alamo Drafthouse. “Once open, the theater is expected to feature a remodeled concession area with an expanded menu of food and snacks, reclining seats for movie-goers, reserved seating and the latest in sight and sound equipment.” There will also be bar. MLive – 5 October 2017

Fayetteville (AR) – Malco is re-fitting two of its cinemas with Imax screens. One screen will open at Razorback this winter while the other will be in Malco’s Paradiso Cinema in Memphis, Tenn. “We looked at all of our options regarding a large format solution and came to the conclusion that no one has a better combination of quality, full immersion cinema, and brand awareness than IMAX. We are excited to add The IMAX Experience to these two already great theaters,” Stephen Lightman, Malco President and CEO, is quoted as saying. 5 News Online – 12 September 2017

Sapulpa (OK) – B&B Theatres’ Cinema 8 has re-opened after refurbishing that included overhaul of the lobby, a new bar and recliner seating. “Many of the improvements are aesthetic, while still others are practical or more functional. A great deal of effort has been expended to improve the guest experience from top to bottom,” said Paul Farnsworth, B&B spokesman. It is also one of the first US cinemas to feature DTS:X. Tulsa World – 13 October 2017

Malibu (CA) – The only cinema in Los Angeles’ elite enclave is closing. The Regal-owned Malibu Cinema Hollywood Theatre has been operating for 45 years but held its last screening on 10 September. “espite extensive efforts to revive the theater’s prospects, including a 75 percent reduction in rent for the past several months, Regal has determined that the current business model is not financially viable and the theater will close as of Sept. 10.” said property management firm Jamestown. They pledge to try to find a new operator. Malibu Times – 10 September 2017