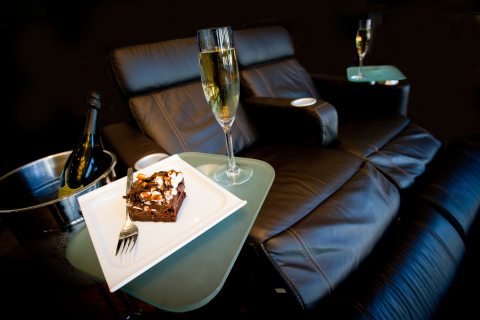 Discover the magic of the Avalon Theatre on Catalina, which is the CJ + Vista Cinema of the Month

USA (NJ) – Cinépolis is expanding its high-end concept to the Northeast US with the re-fitting and re-opening of the Cinépolis Parsippany theater (formerly Bow Tie Cinema) as a ‘Cinépolis Luxury Cinema’ late next year.

The theater’s transformation will create a destination unto itself with a new lobby area, designed for mingling with friends and loved ones; enhanced concessions with twists on theater favorites; renovated auditoriums complete with fully reclining leather seats; and in-theater dining service with stealth-like waiters delivering gourmet meals and full bar options via the touch of a button.

USA (OH) – Carmike Cinema opened its latest multiplex last Thursday at the Anderson Towne Center. “Carmikes Ovation Cinema Grill has a restaurant, bar, luxury seating and state-of-the-art dimension sound and screen effects.” No word on whether it will be re-brandded AMC. WCPO – 5 January 2017

USA (MD) – CinéBistro is hiring 100 staff ahead of its opening later this quarter in Baltimore. The dinner-and-movie cinema operator will launch in The Rotunda in the city’s Hampden neighbourhood. Daily Record (subscription) – 5 January 2017

Qatar – Just before Christmas Novo Cinemas launched the largest laser-projected Imax screen in the Gulf and Middle East region in its new multiplex at the Mall of Qatar (MoQ). The flagship Novo Cinemas MOQ is 19 screens including the following premium offerings:

U.A.E. (Dubai) – Reel Cinema at JBR and City Walk have both become Roxy Cinemas. A third Roxy Cinema will open soon at Boxpark. “While the fancier experiences at JBR and City Walk used to be called Premiere and Platinum, they’re now called the Editor’s Suite (which has spacious seats) and the Director’s Lounge (which is the equivalent of Platinum, reclining seats and all).” Reel Cinemas are owned by Emaar (Dubai Mall and Dubai Marina Mall) while Roxy Cinemas are owned by Meraas (City Walk and JBR). WhatsOn Dubai – 5 January 2015

France – Plans have been approved to build a three-screen cinema in Castelnaudary. Sagec SES has been selected as the builder for the project, which will create a cinema with three screens (with an option for a fourth) and 451 seats – 240, 135 and 76 seats each. Opening is planned for the end of 2018. No operator has been selected, but will have to commit to quality programming. The city at one time had three cinemas, the last of which closed in 2009. Voix du Midi (FR) – 6 January 2017

UK – The Curzon cinema in Colchester could open this September. The three-screen cinema in Queen Street will seat just over 300 people, as well as having two Curzon-run bars – one on the rooftop and one on the ground floor. There will also be two separate restaurants alongside the cinema. This is Curzon’s first cinema in the east of England. Gazette News – 9 January 2017

Phillipines – SM Lifestyle and Entertainment (SMLEI) has launched its first concept cinema in Manila’s Mall of Asia. Cinema 7 and Cinema 8 of SM Mall of Asia features a big lounge area complete with dining seats, as well as disability access. Next year it will also launch a special Children’s Cinema, as well as an “interactive cinema”. The operator is also planning on renovating 100 of its cinemas this coming year. Manila Bulletin – 7 January 2017

France – The Les 3 Luxembourg cinema in Paris is re-opening on 1 February, having been closed since 26 June 2016. The cinema was taken over in 2012 by Charlotte Prunier, director and programmer, who has injected new life in the arthouse cinema. The small cinema’s three auditoriums (101, 99 and 112 seats) have been refurbished, plus the “outside the walls” screen at Studio Luxembourg Accattone (73 seats). The cinema is home to many of Paris’ cinema clubs. Le Figaro (FR) – 6 January 2017

UK (Scotland) – The Screen Machine mobile cinema that brings films to the remotest villages and islands of Scotland has travelled the equivalent of eight times around the world – so it is due for a major refit. “Without this £100,000 plus refit, it would become subject to an increasing number of breakdowns, and would be unlikely to be able to continue full operation for more than another year or two at best.” It has been running 48 weeks per year since 2005. The Herald – 9 January 2016

Hungary – It looks like Cinema City is out as operator of the multiplex in Budapest’s MOM Park shopping mall. Negotiations have been ongoing about continuing the contract but a statement seen by Budapest Business Journal from comms agency HPS Experience on behalf of MOM Park says the multiplex will only be operated by Cinema City until January 23, “when operations will be taken over by an international company new to the country.” Intriguing. Cinema City’s contract with  nearby Mammut mall expired in October and was not renewed. BBJ – 3 January 2017

Germany – Mainz’s oldest cinema is closing. The Residenz was once the number one cinema in the Rheinhessen area, but the two-screen cinema closed this past Sunday (8 January). 12 employees become unemployed and several apartments, shops and cafes in the building will be closed, as it is due to be demolished. SWR (DE) – 6 January 2017

UK – Demolition work has begun on Newcastle’s Odeon cinema. Initial work will include removal of asbestos. The building has stood empty for 14 years. Now it will give way to a retail hub. Chronicle Live – 3 January 2017