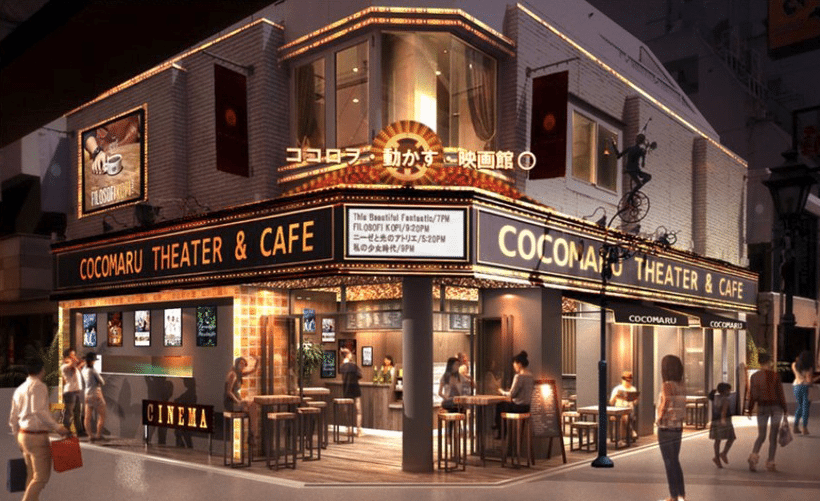 Japan – An interesting hybrid cinema cafe is opening in Kichijoji in early 2017. The Cocomaru Theatre & Cafe is spread over three floors, with three screens. The first floor is a regular cinema, the second is a cinema, eating, drinking, meeting and working space where you pay by the hour, while the third floor is an exhibition and events space that also holds a VR theatre space. Probably the most interesting attempt at re-inventing the cinema as a new social space that I’ve seen in a while. Nifty (JP) – 18 December 2016

UK (Wales) – Cardiff music venue Tramshed has opened a 40-seat cinema – with seats from British Airways first class. The multi-purpose venue looks very impressive, including the food and drinks menu, with even more to come: “An art gallery, dance studios, work-to-live apartments and office space are planned for the site which already boasts a bar/restaurant called The Waiting Room and a tech hub.” WalesOnline – 18 December 2016

UK – Work has begun on the eight-screen, 1,000-seat Picturehouse cinema in Ealing. The art deco facade of the old Empire cinema that closed in 2008 will be preserved. The cinema is set to open in 2019. Evening Standard – 19 December 2016

UK – The first part of the development to bring an Odeon cinema to Norwich in Barons Quay has opened. “Brian Clarke from Cheshire West and Chester Council said the development would “bring a life back into Northwich which has sadly been missing for quite a few years. The cinema is a catalyst for the evening economy that we are looking for in Northwich,” he added.” It is built on the site of an abandoned salt mine. BBC – 15 December 2016

USA (KY) – Work has started on the nine-screen multiplex in Dolphin Drive, Elizabethtown. The USD $11.5 million Crowne Point Theatre multiplex is 42,000-square-feet and will have a 62-foot screen among its nine screens. The cinema will have a game rooms, party rooms and a convenience store concept for concession buying. It is opening late 2017. The News-Enterprise – 16 December 2016

Germany – The foundation ceremony has taken place for the UCI Kinowelt Nordhorn. The cinema, which will have six screens and seat 800 people, is due to open in the autumn of 2017, when it will be the 24th UCI cinema in Germany. Blickpunkt: Film (DE) – 16 December 2016

Germany: CineStar is coming to Freising with a five-screen, 728-seat multiplex planned. The largest auditorium will have 222 seats, 15 meter wide screen and Dolby Atmos. Opening is planned for early 2018. The town’s Camera cinema closed in late 2013. Blick[punkt: Film (DE) – 19 December 2016

France: Pathé cinema has opened its latest multiplex in the shopping center Vill’Up (Paris’ XIX e ). The 16-screen cinema has 2,900 seats and is spread over two floors. It is the largest cinema in the north east of Paris and expects 700,000 visitors in 2017 and a million in 2018. The cinema includes a 4DX auditorium and Paris’ first Imax screen. Le Parisien (FR) – 14 December 2016

France – Nice’s Gare du Sud is set to get a nine-screen multiplex through the transformation of the former Hotel Riviera. Construction is underway for an opening in April 2018. When it opens it will replace the Pathé Paris, though the Pathé Massena will be unaffected, as will the arthouse Rialto cinema. Nice Matin (FR) – 15 December 2016

Poland – A new boutique cinema chain has launched in Poland. OH Kino i located in the Quick Park shopping Centre in Myslowice. The philosophy of OH is to be centrally located, offer quality dining and drinks, and highest technology standard. One to watch. MediaFM (PL) – 12 December 2016

Romania – New cinema operator Happycinema has opened its first multiplex in Bucharest. The seven screen, 1,150 seat cinema is located in Libert Center shopping mall. The company already operates in Focsani and Buzau and has plans to open cinemas in Romania in 2017. Romania Insider – 14 December 2016

Serbia & Kosovo: Cineplexx has opened new cinemas in Serbia and the Republic of Kosovo. The cinemas in Nis and Pristina represent aa €7.5 million investment by Austrian-based Cineplexx. The Nis multiplex has five screens and 800 seats, while Pristina is six screens and 1,000 seats. Next up Cineplexx is opening a eight-screen multiplex in Belgrade Plaze shopping centre in April 2017. Press Release – 19 December 2016

Germany – Paderborn Cineplex has undergone a €2 million refurbishment and re-opened under the name Pollux. Screen 8 has been equipped with leather recliners, reducing seating capacity from 510 to 300 seats, and Dolby Atmos. There is a ticket price bump of €1.50 (€1 online) for the Lux-Loge. There is also a Couch Cinema auditorium as an interim measure as the cinema works to transform all of its screens by March of 2017. Paderborn Meine Stadt – 12 December 2016

UK – The Gaumont Plaza Cinema in Flint has re-opened 40 years after closing. The art deco cinema was bought by Leicester businessman and film buff Ashley Whyatt for £155,000 and has undergone refurbishment. The cinema has one screen operation but plans to open more. It is doing good business by screening first-run films at half the price compared to nearby multiplexes. Daily Post – 16 December 2016

Germany – The oldest cinema in Dortmund, also one of the oldest in Germany, is closing at the end of this year. The Schauburg Cinema in Bruckstrasse has been operating since 1912 but 31 January will see its final screening. The single-screen 260 seat cinema has shown a mixture of arthouse and mainstream films. WAZ (DE) – 13 January 2016 Japan – “Space World” in Fukuoka Prefecture will close at the end of December 2017, which also means the closure of the Imax Galaxy Theatre. At 21 by 28 meters it was one of the largest Imax screens in the world. Cinema Today (JP) – 16 December 2016

UK – The opening of the new flagship Odeon in Bournemouth will mean the closing of two older cinemas in town. The current Odeon cinema in Westover Road looks set to be demolished t make way for shops and 84 flats. Meanwhile the ABC cinema is set to close on 4 January after almost 80 years of operation. The closure also brings to an end the ABC brand, of which this was the last one, having been bought out by Odeon in 2000. Truly the end of an era. Daily Echo – 15 January 2016