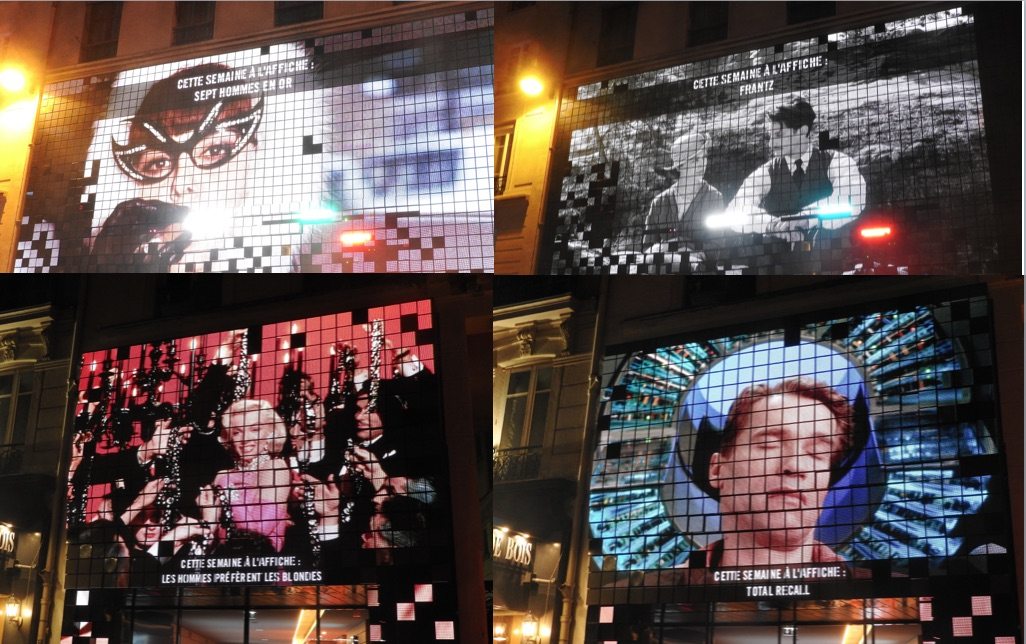 It is impossible to miss the Cinéma Les Fauvettes, walking past it on Avenue des Gobelin in Paris’ XIII arrondissement. By day the signage outside immediately attracts the eye, but by night people stop and gaze in wonder at the dazzling and creative tile display showing which films are screening inside. Even more amazing, none of the films being hawked on the marquee are recent releases.

Paris has long been the home of a wide array of cinemas showing not just the latest French, Hollywood and international film, but also for having perhaps the world’s most active cinematic revival circuit, where both independent cinema and large chains will show old classics and themed festivals of a particular director or actor.

Want to catch Monty Python on the big screen? There is likely to be a cinema in Paris showing “Life of Brian” once every month. Want to catch up on Kiarostami’s early work? There is bound to be an Iranian retrospective running in another cinema. Watch them on DVD and Netflix? Zut alors – c’est nest pas cinema!

So it is only fitting that Paris now has perhaps the world’s greatest classics, revival and retrospective cinema for restored films following the opening of the Les Fauvettes on 5 November 2015.

Past and Present
Cinéma Les Fauvettes appears not to have been built so much as grown organically from wood and glass in the peculiar L-shaped space, which gives the cinema its two facades. The site began as the Le Fauvette Concert hall and  ballroom in 1900. It was then rebuilt as a cinema seating 1,000 people in 1937, before becoming the  Gaumont Gobelins multiplex in 1992. In 2014 it closed for a 20 month, EUR €6.5 million renovation to emerge in its current incarnation.

Credit for the new look of the cinema goes to three individuals and firms appointed by Gaumont-Pathe to realise the vision of a home that brings restored films alive.

Françoise Raynaud is the architect whose design principle of “loci anima” (spirit of the place) is “not to build his work but to create architectures to live, efficient, practical, clever, and recyclable.” This ethos breathes in every part of the magnificent building, which combines wood, glass, light and even an interior courtyard of plants; not something you would see in a typical cinema.

Secondly Miguel Chevalier was tasked with the ‘facade animation’. Working in the visual arts since 1978 and known as a experimental and multi-disciplinary contemporary artist, Chevalier has been pushing the boundaries of virtual and digital arts for some time.  Rather than just installing a square display box, the tiles that show the artwork and imagery from the titles programmed at the theatre cascade across the building, perhaps a play on the pixels that underpin the restoration process of analogue films.

This screen, the pixelated interface is symbolic of a real world transitioning to the virtual world. The images broadcast on cubes, film clips, become abstract. This is not a traditional advertising screen.

Finally Jacque Grange designed the interior of the building. Having worked with clients such as Yves Saint Laurent and Pierre Bergé as well as the designer of such New York establishments as the jewelry shop of Paloma Picasso, the Mark Hotel on Madison Avenue and the Barbican Hotel, the stylishness and confidence of the renovated Les Fauvettes is to be expected. What is surprising is just how well it understands the nature of cinema. This is a place you don’t just want to visit but return to again and again.

A Grand Entrance
There is nothing retro about the entrance to the cinema, which greets you with two automatic ticket machines before you reach the (unmanned) box office. If you wish to buy from a person you’ll have to go to the bar.

Lining the left wall of the long corridor that makes up the “neck” of the L-shaped space are large monitors displaying showtimes and photographs from each movie. Being owned by Gaumont patrons can take advantage of the chains’ membership schemes such as Le E-Billet, available in all its cinema locations.

Once you come to the foot of the L, the magnificence of the cinema reveals itself. It is bright, open and airy, with wood beams levitating through the space in playful geometrical arrangements that you would not expect to see in a cinema. It works equally well by day as by night, creating different but complimentary atmosphere for either time of day.

A lift provides access to the many floors that make up the building – there are two above the ground floor and also two below, for a total of five screens of different sizes.  Rather than coming off as merely a compliance of handicap access regulation, this feels more like a natural part of the building’s DNA.

The all-glass lift sits comfortably next to a small interior quadrangle of a garden – Japanese-like in its zen. Having ‘green’ interiors that mix with green interiors is a trend catching on with hotels, offices and even airports, but this might be the first example of such a design element to be found in a cinema.

Beyond the lift and the garden, towards the other “front” of the building (which is actually exit only a large and comfortable lounge can be found where patrons can sit before or after the films. There is free wifi and a generous amount of space to relax.  Trailers for the current films play unobtrusively at one end of the room.

For anyone planning to attend I recommend arriving early. Not just to enjoy the cinema, but also to take 30-40 minutes out of your schedule and walk across the road. There on the site of one of Paris’ first cinemas you will find the Fondation Jérôme Seydoux-Pathé, “dedicated to the preservation of Pathé’s heritage” and particularly silent films.

The building by Renzo Piano is stunning in its own right, looking like an alien silver spaceship that has landed in the courtyard of an old Parisian building, decorated at the front with statues by the young Rodin. The Italian architect himself described it as being “an unexpected presence.”

Inside there is a museum of silent cameras and projectors, a 70-seat screening room, and exhibition area, a library and research section. The admission is a symbolic EUR €3 and a treat for anyone interested in cinema history.

Marvel also at the collection of Pathe 9.5mmm projectors and then consider how close France might have come to adopting its own digital cinema specifications, as opposed to embracing those of DCI. French cinema practices can be delightfully and frustratingly idiosyncratic.

But don’t stay too long, because you need to fortify yourself before seeing a restored film.

A lot of attention has gone into the food selection. The bright sweet packages might be the most notable thing in the photo, but the full menu reveals a carefully curated selection of wine, drinks, cheeses, meats and nibbles from only the best Paris merchants:

Moreover, the combo packages and specials are themed by films, so you can get Breakfast at Tiffany’s (coffee and four small pastries for EUR €4,50), The Kid (Harris sweets and a soda for EUR €5) or why not drink like Le Dude and have a White Russian (EUR €8).

It might not be the first cinema to come up with this idea, but Les Fauvettes executes it with elan.

Popcorn was never going to be an option, if it had been available, so instead I went for a platter with mini sausages, cheese and wine, which came to a very reasonably EUR €12, especially given the quality.

When I arrived in my assigned seat the man next to me asked, “did you bring your whole dinner with you?” before storming off to a different seat. At least that’s what I think he said in French. But who needs to make excuses for having wine and cheese in France, so to hell with him.

Besides, I wasn’t here to watch just any film, but something particularly cheesy.

Not Just ‘Worthy’ Restorations
Movies screened at Les Fauvettes have been restored by some of the world’s top film laboratories including Le Laboratoire Immagine Ritrovata, EclairGroup, Digimage and Martin Scorsece’s Film Foundation. Many of these restorations have been funded partly or wholly by Gaumont-Pathe, with Agnes Varda’s “Cléo de 5 à 7” costing EUR €70,000, while “Playtime” by Jacques Tati cost more than EUR €800,000.

Les Fauvettes’ motto is “restored versions, intact emotions” and the range of films definitely reflect every emotion you might feel in the cinema.

You are just as likely to find an old French comedy or a Marilyn Monroe classic as a themed month of James Bond or Harry Potter. France being the birthplace of the auteur theory, directors such as far afield as François Ozon and Paul Verhoeven get retrospectives. 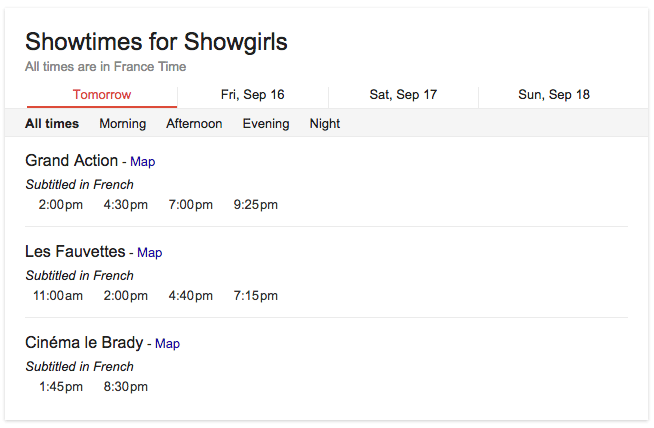 It was the Verhoeven Recall month when I arrived and one film of the Dutch provocateur’s oeuvre in particular was playing that day: “Showgirls”. If you find it odd that a French cinema devoted to restored classics was showing the controversial NC-17 stripper reworking of “All About Eve”, consider that two other Paris cinemas were also showing it the same evening! Bienvenue à Paris!

The film that scandalised America around the same time as President Clinton began his affair with Monica Lewinsky has been beautifully restored and aged surprisingly well. In a short introduction to the film, Verhoeven reveals that the film nearly ended his career in Hollywood.

A box office flop at the time, it went on to earn over $100 million on video. But it is best enjoyed in its full Technicolor camp and kitschiness on the big screen.

Verhoeven himself is now a lauded film maker, with his latest film being submitted for Foreign Language Oscar consideration,  He also currently has a retrospective at Lincoln Centre in New York.

Needless to say, the seating, sound and image were all top quality, as you would expect from a cinema that pays so much attention to detail. The sizable audience consisted of a couple dozen people, including couples who would not have been born when the film was first in theatres.

Walking out of Les Fauvettes it was impossible not to stop and admire the images from the movies being brought back to life in this amazing cinematic palace of wood, glass and light. There is something about this cinema that draws you back in as soon as you have left.

This is a theatre worth coming back to time and time again, because it reminds you that however old or new a film might be, it is best enjoyed in a cinema. And preferably in a cinema as amazing as Les Fauvettes.