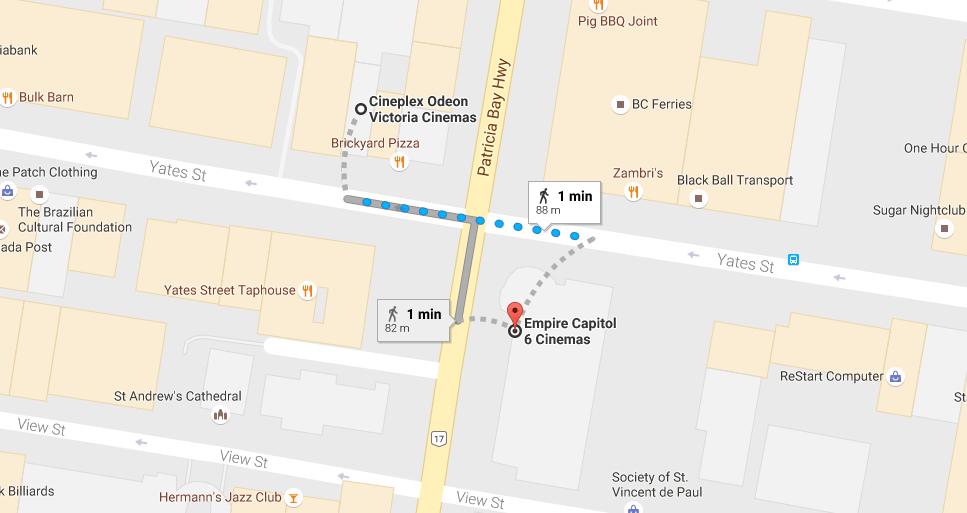 The move to upgrade seating to luxury leather and/or VIP recliners has become a mainstay of the customer retention strategy of Regal, AMC, Marcus and other US exhibitors. But it is the genteel northern neighbour Canada that just demonstrated how cut-throat the imperative to shift to luxury seating has become, with two cinema less then a minute’s walk apart racing to both offer comfy seating.

On Tuesday it was revealed that Cineplex’s Odeon cinema in Victoria (British Columbia) had begun the previous day to gradually replace the seating in all of its seven auditoriums with luxury recliners. The replacement is carried out on a screen-by-screen basis (starting with Screens 6 & 7) to allow the cinema to stay open until all the refurbishments are completed next year, reports the Times Colonist. The first screens will re-open in early November.

The total number of seats will accordingly shrink from 1,800 to 1,000 and it is only the second Cineplex cinema in Canada to switch to an all-luxury seating, following Kelowna’s Cineplex Cinemas Orchard Plaza. The Victoria Odeon opened in 1948 and in 1997 changed from a triplex to a multiplex with curved screens and state-of-the-art sound systems.

“To stay competitive, our business is always looking for new and innovative ways to enhance the moviegoing experience, so this was one way we were able to bring it to the Victoria community,” Cineplex’s communications director Sarah Van Lange is quoted as saying.

In addition to luxury recliners in Victoria and Kelowna, Cineplex also recently launched its 4DX auditorium in downtown Toronto and already offered D-Box motion seats at its SilverCity multiplex. Luxury recliners should not be confused with Cineplex’s adults-only VIP cinemas that offer table service and lounger chairs that that do not recline fully but have an adjustable back.

But step outside the Odeon and look to your left across the intersection of Yates St. and Blanchard St. and you will see the rival former Empire Theatres that was shuttered in 2013, less than a minutes walk away (try a 180 degree turn on Google Street View for yourself). The day after the Cineplex news it was announced that this cinema will re-open on 4 November as Capitol 6 Cinemas, an all-leather recliners luxury multiplex, as separately reported by the Times Colonist.

The cinema’s lease was acquired from the building’s new owner (Jawl Properties) by a Canadian operation owned by Andrew Golin, who is also vice-president of Regency Theatres, which operates cinemas in California, Arizona and Nevada. The refurbishment began in June, with new carpets, paint, digital projection and – yes – reclining luxury seats. Mr Golin is said to have learned about the Cineplex initiative only two weeks ago. He took a relaxed approach to the news:

It’s ultimately a good thing, because they are now luxury and we are luxury and people have more options downtown. We won’t be playing the same films at the same time.

Despite being an outsider, Golin thus demonstrated a very genial Canadian let’s-all-get-along attitude in that the inhabitants of downtown Victoria will suddenly get a choice of two small multiplexes with luxury recliners in the first week of November. When Empire was opened by Famous Players in 1981 it was the city’s first purpose-built multiplex. Continuing with firsts, when it re-opens the re-christened Capitol 6 will also be the first cinema on Vancouver Island to offer customers a Coca-Cola Freestyle self-serve machine.

Adding luxury seating reduced capacity to less than half at 564 seats – an average of less than 100 seats per screen. Golin is said to have opted for prices  “top-of-the-line seats” with two separate motors that operate backrests and footrests independently. In addition the company decided to install larger screen, which pushed back the opening date from August to November.

The new Capitol 6 will offer reserved seating and claims that the admissions will be “competitively prices” and close to what Odeon charges. General admission for Cineplex Odeon films are CAN $10.50 (USD $7.93), with a CAN $3 (USD $2.27) premium for 3D films, with children’s tickets age three-to-13 cost CAN $8.50 (USD $6.42) and seniors pay CAN $8.99 (USD $6.79). Cineplex implemented a general price increase on 1 October of between CAN $0.21 to $0.52 (USD $0.16 to $0.39), though this did not affect local cinemas in Victoria. There are said to be no immediate plans to increase prices following the introduction of luxury seating.

While even an American chain thus demonstrated an agreeably Canadian attitude that would probably not prevail between two cinemas going luxury that close together south of the border, there are several conclusions that can be drawn from the Victoria luxury cinema recliner race.

The first is that while they are called “luxury” these seats represent the new normal. Luxury recliners are not the same as VIP Cinema with wine and hot nibbles brought to your seat. They are what will tempt you away from Netflix and Amazon Prime on your big OLED UHD television set, because the screen is bigger, the films are newer and the seating is more comfortable than what you have at home

The second is that normal seating will not go away, but it will increasingly be reserved for cinemas in poorer areas, the same ones where you would once not have thought to install or re-furbish with stadium seating. Cineplex may only have two all-luxury recliner multiplexes, but expect the conversion trend to accelerate once it crunches the numbers from those screens.

Thirdly, the shrinking of audience capacity means that cinemas have given up hopes of ever growing the market of cinema goers and simply want to halt the decline. Instead they will focus on extracting higher ARPU (average revenue per user), if not by hiking ticket prices immediately, then by getting them to spend more on concessions, of which cinemas anyway keep 100% of the profits.

Fourthly, while cinemas do not go broke switching to digital thanks to virtual print fees (VPFs), there is a risk that a true luxury seating arms race could push cinemas into debt, similarly to what stadium seating and digital sound did in the 1990s. At the moment the interest rates are low and cinemas with good credit ratings (i.e. most of the majors) can borrow on favourable terms, but a it only takes one bad year at the box office to change that.

In conclusion, the future will not just be about luxury seating; but luxury seating is where the future of cinema going lies. If you don’t believe us, there are a couple of blocks in downtown Victoria B.C. that we would urge you to visit.

UPDATE: This article was amended on 22 October 2016 to reflect the following changes:

Capitol 6 is not owned by Regency Theatres but by a Canadian company owned 100% by Andrew Golin himself.

Empire is the former name of the cinema, which is now and henceforth only known as Capitol 6.