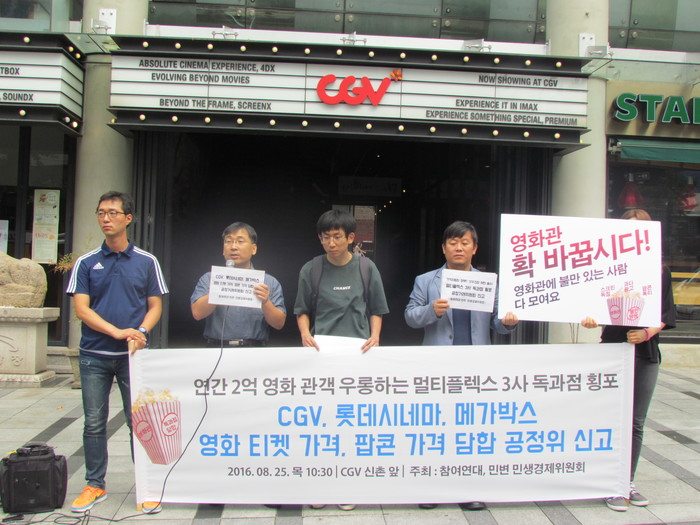 South Korea has some of the most advanced multiplexes in the world, yet consumers are starting to protest against what they see as oligopolist practices by the country’s Big Three. CJ CGV, Lotte Cinemas and MegaBox between them control 92% of the Korean market, which is the fifth-biggest overseas market with an annual box office of USD $1.5 billion in 2015.

As reported in NGO News two Korean grass root organisations have begun legal and protest actions against all three exhibitors, pointing towards ‘excessive’ cinema ticket prices, as well as high prices for concessions, that may breach monopoly regulation and fair trade acts. The People’s Solidarity for Participatory Democracy and the LDS Welfare Economy Committee have been monitoring pricing at all three cinema chains since March of 2016 and want to draw attention to ‘monopolistic practices’.

The chart above illustrates the similarity in pricing of popcorn and soda between CGV, Lotte and MegaBox multiplexes. There are also claims that the weekend ticket pricing of KRW 10,000 (USD $8.89) is up KRW 1,000 (USD $0.88) in the past year, which is more than the 0.9% rate of year-on-year inflation in the first half of 2016.

A consumer survey in 2014 found that 79.1% of respondents felt that cinema ticket prices were too high, when the average cost of a ticket was just KRW 6,600 (USD $5.87). The multiplexes have defended themselves by saying that they have increased prices because of better facilities and new premium offerings, such as 4DX motion seats and Screen X premium large format (PLF) screens – both created by CGV.

A was filed by the NGOs a year and a half ago, claiming violation of Article 19 of the Fair Trade Act, but the Trade Commission has not responded. South Korean authorities have, however, cracked down on Lotte for allegedly using its concessions business as a slush fund for political brides. It may be pricey popcorn to NGOs and consumers, but it seems like peanuts to the Korean authorities looking into more serious allegations of corporate wrongdoing. Yet it does little to improve the image of Korean exhibitors at a time when they are looking to expand abroad.