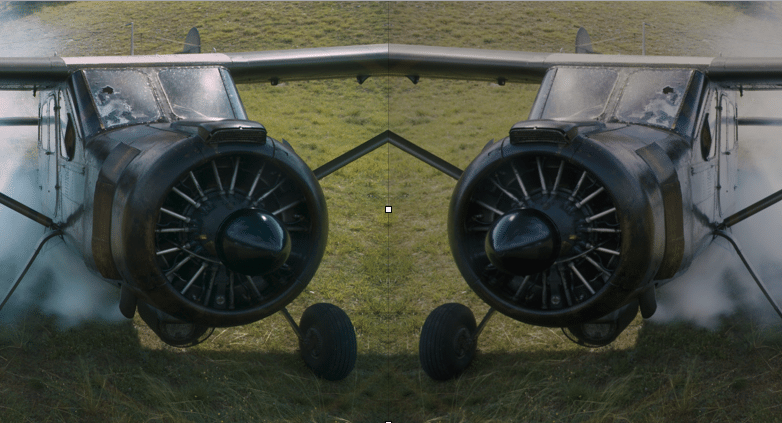 The biggest technology news of CineEurope 2016 was nowhere to be found on the tradeshow floor or in the many conference sessions, but at an invitation-only demonstration at the nearby Cinesa 18 multiplex of Ymagis’ new EclairColor mastering and projection solution. Using two stacked Sony projectors, those of us attending were shown sequential and side-by-side footage from the film “Belle et Sébastien, l’aventure continue” (“The Adventure Continues”, dir: Christian Duguay, 2015) as a regular and re-mastered DCP.

The above image is a butterfly of a still from the film, with the regular grade as displayed with a standard DLP projector on the right and the EclairColor on the left, although an image on a computer screen or mobile device does not begin to approximate the experience of seeing the difference in the cinema. For one thing you’d have to imagine the left side being at least 50% brighter. There was also significantly deeper blacks, higher contrast and richer colours that ‘popped’, without being over-saturated on the EclairColor version.

The results were so impressive that some who attended the demo muttered that Eclair must have downgraded the original DCP to make the ‘normal’ version so muted by comparison. The truth is that they didn’t, partly because they didn’t need to and partly because they would not be that dumb. UPDATE: the image was graded to simulate the projection with a standard 2.000:1 contrast ratio DLP projector for the ‘normal’ version, whilst the Sony projector is capable of up to 8.000:1. This WAS also made clear verbally during the demo, but because I sat through the presentation in French I must have missed this. We stand corrected and hope this sets the record straight.

Celluloid Junkie spoke exclusively to Ymagis’ CEO Jean Mizrahi over Skype on Monday to discuss reactions to the demonstration, proprietary solutions vs. open standards, business models, projector compatibility and the road map for the most most interesting enhancement to cinema presentation since Dolby Cinema. Although not explicitly said so, EclairColor is a direct challenge to Dolby Vision/Cinema, but at a significantly lower price point.

Celluloid Junkie: What was the origin of EclairColor?

Jean Mizrahi: We had started working on different colorimetry issues and high contrast at both Ymagis and Eclair before Éclair’s acquisition by Ymagis. Since then, we have worked on different options and since Eclair has been post producing content for TV series in high dynamic range [HDR], we gained a strong experience and developed a strong know-how.  Directors of photography and filmmakers appreciated what we did, which pushed us to venture into the big screen using our internal expertise. A group of engineers and colorists led by Cedric Lejeune and Thierry Beaumel was created to supervise our research efforts, which eventually led to the tests we presented at CineEurope this past June. Everyone needs to keep in mind that current digital cinema standards are based on the performance of first-generation digital cinema projection systems, which are now over a decade old.

CJ: What has been the response of the creatives that you have demonstrated it to?

Jean Mizrahi: We’ve only shown it to happy few directors and cinematographers as well as cinema exhibitors. The response has been really great so far. They are convinced that EclairColor represents a real change and brings added value to the big screen experience. A well-known European director told us he wants his next movie, currently being shot, to be available under the EclairColor format.

CJ: What was the reaction at CineEurope to EclairColor by those that saw it, particularly exhibitors?

Jean Mizrahi: Exhibitors were very impressed. The only question we got was ‘When can we have content available with EclairColor?” We cut straight into the chicken and egg situation, as cinema exhibitors want to be sure they can access content so they can make the investment.

CJ: What would be involved on the exhibition end in terms of technology to deploy it and extra cost?

Jean Mizrahi: EclairColor requires projectors able to show broader range of contrast. Right now only Sony Digital Cinema 4K projectors are able to provide this level of contrast, apart from the Dolby Cinema solution, which remains onerous for cinema exhibitors. Others are working on it. Barco has demonstrated a laser projector with higher contrast. There is a broader trend in the market to develop such projectors.

More concretely, cost will depend on the size of the screen, but this solution does not require laser projectors, and again, it is standard projection technology, no new hardware. Any projector offering the right characteristics in terms of contrast and color space can play EclairColor content. Also, to ensure optimal projection conditions, the auditorium must be devoid of parasitic elements (black seats and walls, strategically-located emergency lighting to avoid onscreen reflections, etc.).

The idea is to provide an open technology. We do not want to be a gatekeeper. Today, there are no standards, but of course we will comply with future standards when they exist, it will just be a software adaptation of EclairColor. It is always better in the market to have open standards, because it makes the technology developing much faster. DCI has been a model to prove it. Having said that, we will probably need to spend money initially to make content available with EclairColor and we will need to deploy an adequate business model to recoup this cost, but we believe this will be a temporary problem.

CJ: Is this solution DCI compliant yet?

Jean Mizrahi: DCI is a specification with a certain level of light on screen. Our concept is completely compliant in terms of security and format, but provides a variation in terms of light and color, as Dolby Cinema does. Because EclairColor requires more light to provide a better image, around 30 foot-lambert on screen, we need to go beyond the 14 fL that DCI specifies. The standards will need to evolve on that aspect. The industry is already working on it, but the big question mark is how long it is going to take and will there be consensus among the different players. The good thing about DCI is that it was a few players who decided to push for a specification that got converted into an international standard. This is a good way to make things happen. In fact this is also how 35mm became a standard more than a century ago… Here it is more of an industry-wide discussion, which may take more time.

CJ: Approximately how much time does it add to the mastering process for feature film?

Jean Mizrahi: There are several factors to take into consideration. It depends on whether you also get the movie to do post-production beforehand. If we are in charge, it could be matter of a few days. Otherwise the content will need to be remastered from its existing DCDM or DSM. We believe that depending on the movie and its creative aspects, each project being different, the remastering process should require between one and two weeks.

CJ: Do you foresee that this will deployed for consumer formats as well?

Jean Mizrahi: It is too premature to say. It is an industry discussion that we will need to address at some point.

CJ: When can we expect to see it demonstrated again?

Jean Mizrahi: We will set up in the coming weeks a demo room in Los Angeles. In the meantime, we are going to show it in Europe to various directors, directors of photography and distributors. The whole idea is to make the community aware of this new solution.

What is original with our approach is that it is quite easy to implement for both content providers and cinema exhibitors. On the mastering side, our proprietary technology is immediately available. On the projection side, as I said earlier, today it works with Sony Digital Cinema 4K projectors (and it’s quite easy to equip at a very reasonable cost), and we expect other manufacturers to progressively provide compatible solutions.

CJ: On what financial terms do you expect it to be available to cinemas?

Jean Mizrahi: We are working on the business model and will be ready to implement it at the end of the summer.

CJ: Can you tell us how you see EclairColor develop in the coming months?

Jean Mizrahi: It is part of our plans to start upgrading cinema screens this fall. Once adapted, the projection equipment can be used to screen EclairColor mastered DCPs as well as standard DCPs.  This is a very important aspect: an exhibitor can get equipped and is not dependent upon availability of EclairColor DCPs to have its screen pursue normal operations. In the meantime, we want to continue to collect feedback from experts – cinemas, directors of photography, directors and distributors – even if the feedback so far has been excellent. Now we need to get to more concrete aspect of this project and ensure that it can be adopted by the industry. This will take more time, but we believe that the difference in quality is so important, for a limited additional cost, that the industry should quickly embrace this opportunity.

CJ: Having seen it demonstrated in Barcelona it really is a technology that doesn’t need to be explained, but just shown to people, wouldn’t you agree?

Jean Mizrahi: The only way to make it work is for our industry to get convinced by seeing it. We are in a situation where the big screen will need to compete more and more with small screens. The flat panel technologies are moving fast. TV sets can now show HDR content and offer better color experience to the public. It is absolutely critical for the rest of the cinema industry to embrace new technologies, to move fast and to provide a similar level of quality.

On another note, we are at the very beginning of the digital projection equipment replacement cycle, as the first cinemas were equipped ten years ago. We already have customers starting to replace their equipment, and the volume will grow in the coming years. It is the perfect timing to question future quality levels in cinema theaters.

UPDATE: We have been asked by Sony to make the following clarification about the conditions in which the demo was held and how the differences between the ‘normal’ and the EclairColor DCP versions were achieved.

“The left side of the butterfly comparison, where it said “standard”, has been modified to simulate a less than 2000:1 DLP contrast ratio. The left side did not show what [Sony’s] dual projection system normally delivers in terms of a contrast ratio of more than 8000:1. ”

NB: in the image above it is the RIGHT side that represents ‘normal’, but as we already said, the butterfly above is not the same as what was shown in the cinema. We hope that these clarifications sheds sufficient light on the issue.