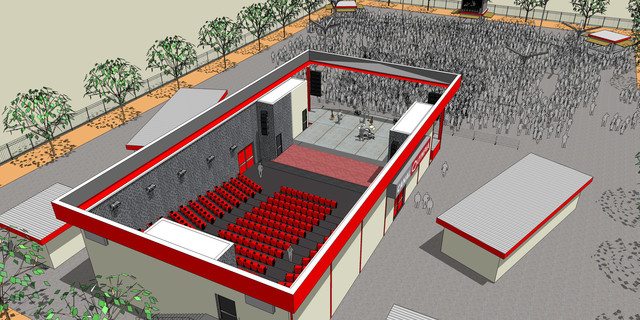 French utilities and media conglomerate Vivendi has opened the first cinema in Cameroon, with further plans to open 100 screens across Africa. The Canal Olympia cinema in the capital Yaounde seats 300 people and is named after Vivendi’s Canal+ television network – which is distributed to over two million subscribers across Africa – and Vivendi’s l’Olympia concert hall property in Paris. The cinema is located in the premises of the University of Yaounde 1.

As well as showing first-run films the cinema will host cultural events and showcase Cameroonian talent on the stage and screen. The complex was inaugurated by Vincent Bolloré, Chairman of the Vivendi group, and Cameroon Prime Minister Philemon Yang. The cinema has 720 square meters solar roof panel to supply it with electricity, developed by the Bolloré Blue Solutions program that also powers electric busses on the university campus.

“We have plans to open (in six to seven months) a second cinema in Douala (south) and a third cinema in Yaoundé,” said Mr. Bolloré. After Cameroon the plan is to focus on other French-speaking African countries: Togo, Benin, Guinea, Senegal and other countries, said Corinne Bach, Vice-President of Vivendi Village.

As well as television Vivendi has a significant presence in Africa in transport, logistics and port management. Cameroon’s last cinemas Abbia (Yaoundé) and Wouri (Douala) closed in January 2009, victim of rampant piracy, though as recently as 1973 the country had 32 cinema screens. The Canal Olympia cinema was delayed because of disagreements about having a commercial enterprise located on a university campus.

The cinema was constructed in two months by Cameroonian company Kalfrelec at a cost of CFA 2.5 billion (USD $4.3 million). It is part of a slow resurgence in cinema in sub-Saharan Africa, led by countries such as Nigeria, as the continent’s growing middle class develops an appetite for watching films away from the home again.