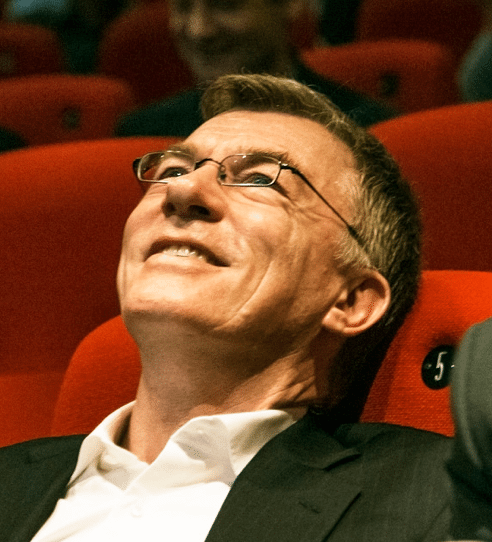 Kim Pedersen, is the knowledgable and sometimes outspoken President of the Danske Biografer (Danish Cinema Association) as well as Vice-President of the European cinema trade body the International Union of Cinemas (UNIC). Cinema runs in his blood, being the son of Poul E. Pedersen, who not only was a cinema operator in Aarhus but also the Danish representative of United Artists. His father was one of the last people to be granted a licence by the government to run a cinema, which was still required in the early 1970s.

On July 1st, 1978 Kim Pedersen took over his father’s cinema business at the tender age of 20, making him the youngest cinema operator in Denmark. The following year the cinema became the first in Denmark to install Dolby Stereo for Milos Forman’s “Hair”, as well as new seats with more legroom. In 1981 part of the foyer was turned into an additional auditorium, while in 1982 the basement was converted into a third screen, with a fourth opening in 1984. In the span of a few short years, while still in his twenties, Pedersen had turned a single-screen cinema into a mini-multiplex. Pedersen acquired the Folketeatret cinema in Aarhus in 1984, whose three screens saw the addition of a fourth in 1986. This cinema played more commercial fare, while his first cinema had a more high-brow focus.

In the early 1990s, with competition intensifying from Danish cinema major Nordisk, Pedersen’s business merged with his Aarhus rival Mogens Steen Kruse’s Palads and Royal Cinema. In 2005 Pedersen became President of the Danske Biografer and two years later he also became Vice-President of UNIC. Since Pedersen is never afraid to speak his mind, we were delighted to get the opportunity to quiz him about several burning topics in the industry and the region, ahead of this year’s CineEurope.

Celluloid Junkie: What is your first memory of the cinema?

Kim Pedersen: Being literally born into the film industry, my first memory is my father’s private screening room, where I played and had several birthday parties held, followed by a movie. My first memory of being in a ‘real’ cinema is watching “Pinocchio” in the Copenhagen theatre Metropol in 1965. I cried like a baby. You have to remember how boys in the film end up, if  they don’t behave properly. Even back then, I had a heavy burden on my shoulders.

CJ: What qualities or skills do you feel are important in your job of heading up a cinema trade body?

Kim Pedersen: A sense of politics. To always be well prepared. To base information on facts. To always being one step ahead and – of course – to be able to listen.

CJ: You’ve been in the cinema business since a young age; what do you feel are the most fundamental changes the industry has gone through in that time or is going through now?

Kim Pedersen: Well, back when I started running a cinema, cinema owners in cities with competitors had to fight for the movies to get the exclusive rights to show a movie in their town. Watching a lot of movies in, for instance Cannes, getting information on who had the rights for Denmark and then persuading the distributor to premiere his or her movie in my cinema – I really enjoyed that. Now every cinema can show the same movies, which of course is fine and beneficial to the whole industry and the audience, but I enjoyed the fight.

Also getting rid of all the old ‘flea-pit’ cinemas with rather small screens in exchange of cinemas with air conditioning, stadium seating, gigantic screens and great sound has been a good change.

And of course the ever-shortening nature of the window. I will never understand that approach to getting more income. Pulling that handle has never saved the industry, and to keep on pulling it will eventually have dire consequences. Actually, I regard the shortening of the window as the main reason for the challenges the industry faces. The economy in the film industry is like a finely-tuned clock; if you start messing with the mechanism, it will have consequences to all of us. Even consequences which are impossible to foresee in the long term, and which cannot be easily reversed. We are now at the end of the road, and any further shortening of windows will, in my opinion, destroy the industry as we know it.

CJ: Denmark has both a strong film production and cinema exhibition scene. Do you see those two as co-related?

Kim Pedersen: Absolutely no question about it. The market share of local movies in Denmark has, for the past ten years, been in the high 20s. Moviegoing annually per capita is highest in countries that have strong local film production. In Denmark we have one of the highest moviegoing numbers per capita in the world: 2.5. The Danish language area covers 5,7 million people, it is essential to producers to have a very strong local cinema market. So it all adds up. Strong local film productions equal a strong local cinema market and vice versa. We live of each other.

CJ: What activity takes up most of your time in your current position?

Kim Pedersen: Keeping the cinema owners well-informed so that they can make all the right decisions.

CJ: Which current cinema trends keep you the most excited?

Kim Pedersen: That we have seen an increase in moviegoing for millennials, despite streaming and other mischief. That underlines the survival and importance of cinemas and movies for upcoming generations.

CJ: Denmark, like other Scandinavian and mid-to-small European countries, has one dominant exhibitor. How do you balance the interest of such a company against those of smaller operators?

Kim Pedersen: I focus solely on what is good for both small and large operators. More binds them together than meets the eye. You also have to recognize that I am president of an umbrella-organization which covers the four Danish cinema associations – if they do not agree, I leave it up to them to fight it out!

CJ: What are the key challenges you see facing the cinema industry today? Are there any challenges specific to Denmark or Scandinavia?

Kim Pedersen: As I stated earlier I regard the shortening of the window as a major challenge, and third parties, like for instance Sean Parker and the EU, interfering with a model which has for decades secured a high volume of quality and diverse movies for the consumers. In small Scandinavia I fear movies in our own language might be challenged by globalization.

CJ: How can smaller countries and cinema operators remain strong and viable in the face of industry consolidation and much larger international players?

Kim Pedersen: Local film production needs to maintain what it does best. It is useless to try beating US movies on their own turf. The mum and dad-run cinemas stand a good chance of survival in Denmark in the age of the digitalization. And small local non-profit cinemas, run by volunteers, also stand a good chance of survival, as they enjoy really strong local support.

CJ: Can you tell us something about initiatives either underway or that you’d like to see to foster movie going amongst the younger generations?

Kim Pedersen: Virtual reality is certainly something we need to look into, but at the end of the day, no matter what technologies have been introduced, we have historically  always ended up with the fundamental: watching a picture on the big screen together with a lot of other people. That’s the basics of moviegoing: the social experience. Young people just have to familiarize themselves with that experience, which is why we in Denmark invite on one day each year 10-years olds to experience cinema for free.

CJ: How should the cinema industry in Denmark and Europe balance the focus on new technologies, better service and improved comfort and customer offerings in cinemas?

Kim Pedersen: With all means possible in a wide range of efforts. It’s all important to maintain the interest of movie-goers. Cinemas must always try to offer a premium experience – one impossible to get anywhere else.

CJ: Who were your mentors and who do you look up to, either inside the cinema industry or outside it?

Kim Pedersen: There are certainly a lot of people I am influenced by: John Fithian, Phil Clapp, Patrick Corcoran, Bill Mechanic, David Hancock amongst others.

CJ: Do you feel optimistic about the future of the cinema business?

Kim Pedersen: If money talks and common sense are allowed to prevail, I am hopeful about the future of our great industry. But if short term thinking, which we have experienced several times in the past, prevails, I am deeply worried.

CJ: There is a rumour that you could be the next President of UNIC when Phil Clapp’s term is up. Can you comment on those rumours?

Kim Pedersen: Such a rumour is of course very flattering to me, only I am not running. I am fine being Vice-president. I also think a UNIC president should have his home base in one of the larger countries of Europe.