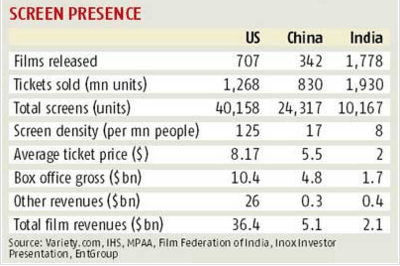 India – Could the Indian box office boom be undermined by single screen cinema closing faster than multiplexes are adding new screens? Like the PVR five-screen cinema at Grand Mall in Chennai’s Velachery, there are dozens of multiplexes across India ready to open but still awaiting a licence to start. But even as multiplexes open 150-200 screens per year in India – or what China opens in two weeks – single screens are closing at twice the rate. This apparently put a break on box office growth in 2014 and quite likely also 2015. Business Standard – 18 January 2016

Germany – In a survey by Horizont.de only 12.2% of respondents said that they would go to the cinema to catch a film they wanted to see. 39.9% would wait for it to come to free-to-air television (which dominates in Germany), while video-on-demand (presumably SVoD like Netflix too) was between the two on 17.4%. This partly explains why cinema going is set to decline in coming years in Germany – unless something is done about it. Horizont – 15 January 2015

Israel – Cinema City has begun screening films dubbed in Arabic, after a father appealed to them on Facebook to be able to take his children to watch films without having to translate from Hebrew. “Nasser and a friend quickly started a Facebook page called “Madinat al-Afalm” (Cinema City, in Arabic), where they outlined their initiative to screen the dubbed version of “Minions” in Cinema City’s Kfar Sava and Jerusalem multiplexes. After hundreds of parents expressed their support for the idea, Nasser reported the response to Cinema City.” While the DCP eventually only had Arabic subtitles the screenings were a success. This small step also shows how cinema can help act as a bridge and conciliator. Haaretz – 18 January 2016

Australia – Village Cinemas ran a three-day onsite innovation exercise to create, test and prototype a customer-centric apps and software. “Our legacy is not in ecommerce or m-commerce, but we find ourselves operating in that space and becoming a bigger and bigger player,” said Village Cinemas’ general manager of sales and marketing Mohit Bhargava. “Between 35 and 40 per cent of ticket sales are now done via mobile and desktop devices, so digital is a huge sales channel for us.” Digital and user experience consultancy Deepend was the tech partner. CMO – 20 January 2016

Australia (NSW) – The Palace Cinema in the Sydney suburb Leichhardt was evacuated following a bomb threat. “[A] man allegedly dropped a suspicious package at the door with an ominous message. According to patrons a man left the package at the door before telling a female witness that she would find out about package later.” The device turned out not to contain any bomb. Yahoo News – 15 January 2016

Germany – A man was detained for firing a gun with blanks into the air outside a cinema in Mayen (Kreis Mayen-Koblenz). The man turned out to be very drunk but the police could not establish a motive why he fired the gas-powered gun (which did not contain live ammunition). General-Anzeiger (DE) – 17 January 2016

USA (ID) – Meridian Cinemas, parent company of the Village Cinema and Backstage Bistro, is suing Idaho State Police after an attempt to revoke the exhibitor’s liquor license for serving alcohol during the screening of “50 Shades of Grey” in its VIP section. Apparently the law in Idaho prohibits businesses from serving alcohol during the screening of films that depict sex. Staff says undercover detectives on  sting operation ignored warnings that drinks were not allowed inside the cinema. KBOI2 – 21 January 2016

India – The issue of standing up for the national anthem seems to be getting a lot of people agitated in Maharashtra – home to Mumbai and the only state in India where it is mandatory to play the national anthem before each film. Families, film makers and now two women have all been targeted for remaining seated. Zee News – 18 January 2016

Poland – Warsaw has its first bar/restaurant/cinema with the opening of Jack’s Cinema. There is a bar and music venue in front and a dining room with a screen in the back. Not likely to be screening first-run films, but an interesting attempt to mix dining with viewing. Naszemiasto (PL) – 20 January 2016

South Africa – Nu Metro Cinemas is the first exhibitor in Africa to install Auro immersive audio and 4K projection. South Africa’s second largest chain installed both at the refurbished ‘There Glenn’ in Johannesburg, which will also use the RealD Precision White Screen, another first for Africa. Press Release – 19 January 2016

Singapore – Singapore has its second Imax screen as Shaw Theatres opens the largest multiplex in suburban Singapore. The cinema in the Punggol shopping mall Waterway Point has 11 screens, taking Shaw’s screen count from 30 in 2010 to the present 66. Shaw already operates the city-states previously sole Imax screen at the Lido on Orchard Road. AsiaOne – 19 January 2015

Australia (NSW) – The owners of the Avoca Beach Cinema north of Sydney have filed an appeal against the local council’s opposition to a four-screen expansion plan. The battle for the extension has already been going on for 13 years. Gosford Council opposed it on the grounds of the extension being “excessive in scale” and “out of character”, along with concerns about flooding and parking. SMH – 16 January 2016

France – The Star cinema in Cannes is closing. A little-used four-screen theatre for 50 weeks of the year, it is one of the much-used screening venues during the Cannes Film Festival. But a protracted dispute with the landlord over rent has forced it to close and no new screens will open in Cannes until 2018 when a multiplex is due to open in La Bocca. Deadline – 15 January 2016 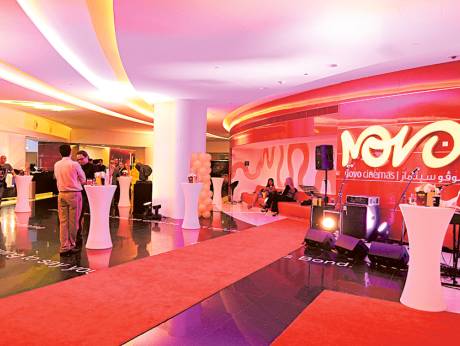 U.A.E. (Dubai) – Novo Cinemas is opening a 12-screen cinema in Dragon Mart 2, a huge commerce centre for Chinese products. The operator plans to expand to 201 screens with around 25,000 seats in 2016. These include Novo’s ‘highly anticipated opening at IMG Worlds of Adventure in Dubai, our North Gate opening in Qatar, in addition to a couple of key strategic openings which will be announced in the near future,” CEO Debbie Stanford-Kristiansen is quoted as saying. Gulf News – 21 January 2016

USA (NY) – Manhattan’s last major single-screen cinema is coming to an end. The iconic Ziegfeld on 141 W. 54th St. in Midtown will re-open as a high-end event space in 2017. Real estate owners Fisher Brothers informed the cinema’s leaseholder Cablevision that there would be no lease renewal. The cinema had been losing around USD $1 million annually. New York Post – 20 January 2015

USA (AZ) – Alamo Drafthouse is coming to Chandler, but not to the originally planned location. A falling out with Vintage Partners means that Scottsdale-based Harkins Theatres will now instead be part of the down town Row development. Alamo will instead now open its 9-screen cinema at Chandler Crossings on the northeast corner of Arizona Avenue and Chandler Heights Road later this year. Phoenix Business Journal – 21 January 2016

USA (WI) – USD $1.5 million of public funding (i.e. taxpayer money) will go to Marcus Theatres to build a new multiplex Southridge Mall in Greendale. The money is to be paid off by 2023 through a new property tax. The eight-screen cinema (which might expand to 12 screens) will open in 2017. Journal Sentinel – 21 January 2016

Germany – A cinema in Wolfsburg put on a special screening for 100 refugee children, with popcorn and soda included. What film did they pick? One that has served the multi-lingual and no-subtitles-or-translation-required needs before; the wonderful “Shaun the Sheep”. Hats off also to Studiocanal for making the DCP available to screen free of charge. WAZ online – 17 January 2016