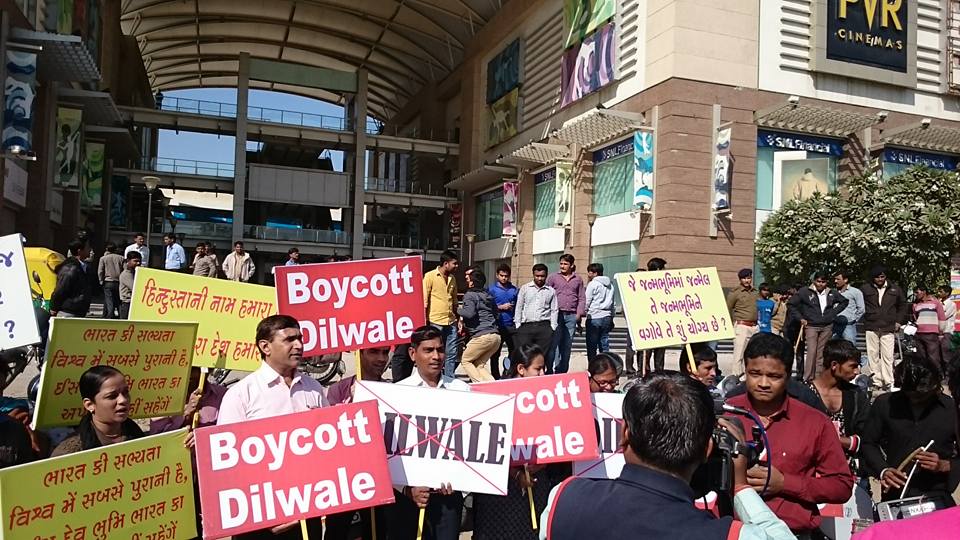 USA (CA) – Quentin Tarantino is angry, very angry, that Disney has booked up Los Angele’s ArcLight Cinerama Dome for “Star Wars: the Force Awakens” and blocked “The Hateful Eight” from screening there in 70mm. Appearing on The Howard Stern Show, Tarantino is quoted as saying that Disney were “going out of their way to fuck me”. Despite having a verbal agreement to screen Tarantino’s film, Disney is alleged to have threatened to pull “Star Wars” from all Arclight cinemas if the screening went ahead. “It was real bad news and it fucking pissed me off,” added Tarantino. The Guardian – 17 December 2015

But, wait, there is karma. Here is a video of ArcLight audiences freaking out when the “Star Wars: the Force Awakens” DCP suddenly skips ahead. Apparently there were problems with the 3D, forcing a temporary halt. Then came the glitch, an eyewitness tells Canada’s CBC, as the film was re-started. “They promised to rewind it about five minutes. When it finally came back on, it came back about 15 minutes ahead. Because we had obviously never seen the movie before, everyone in the theater believed it to be a spoiler.” It was close to Bedlam. “The audience went crazy. Everyone started yelling, throwing popcorn, running out of the theatre with their ears covered … people were turning around flipping off the people working the projector and running out of the theatre sprinting.” CBC.ca – 20 December 2015

Egypt – But it could be worse. Another “Star Wars”-related rant comes from this fan in Egypt, who posted an expletives-ladder social media post after Imax decided to cancel the first screening due to a corrupt DCP. “‘I HOPE YOU DIE. I HOPE YOUR KIDS DIE. I HOPE THEIR KIDS DIE CAUSE YOU ARE ALL GENETIC WASTE,’ is one of the more printable sections. Imax said it was sorry. Daily Mail – 17 December 2015

If you think cinema managers had it easy, read this article: “I manage a movie theater, and the opening weekend of ‘Star Wars: The Force Awakens’ was a nightmare hells cape.” Meanwhile a man in Southampton was arrested for repeatedly standing outside a cinema showing “Star Wars” and shouting plot spoilers.

New Zealand – KPMG looks at the “outstanding success of the Vista Group” in NZ Herald, and it is a big success story for a small country mostly known in cinema circles for Lord of the Rings/Hobbit. Much of the credit goes to the company’s CEO. “Murray Holdaway is a humble, understated man who doesn’t have a big, brash leadership style but who very effectively attracts and inspires his people.” And if that wasn’t enough, Vista has also bought a 50% stake in cinema intelligence specialists Share Dimension on un-disclosed terms. NZ Herald – 21 December 2015

USA (NY) – A smoking projector forced the cancellation of the screening of “Star Wars: the Force Awakens” in New York City’s Regal Cinemas Battery Park II multiplex in Lower Manhattan. “Employees ran in to theater 20 mins into film saying “GET OUT! Everyone out! Use any exit,” an eyewitness reported. The cinema passed out between 500 and 1,000 vouchers to disgruntled fans. Daily News – 18 December 2015

France – A man stood up during a film screening in a Pathe cinema in Rouen in France and shouted “Allahu Akbar”. People then fled from the “Babysitting 2” screening as he also screamed “You will all die” and “God is in my head”, before being apprehended by security. He has since said he is sorry, but is still being prosecuted. La Depech – 23 December 2015

Australia – A Hoyts cinema in Perth had to be evacuated after a popcorn machine caught fire. Many “Star Wars” fas had to be evacuated. But the fire was extinguished and soon afterwards patrons were re-admitted. Perth Now – 26 December 2015

Shooting at Wynsong Movie Theatre in Mobile. The little orange arrows in the grass are bullet casings @FOX10News pic.twitter.com/WIYsOENBzg

USA (AL) – Four people were injured in a shooting outside the the Carmike’s Wynnsong Cinemas in Mobile County, Alabama on Christmas Day. Witnesses said they heard an argument before the shooting began. RT – 26 December 2015

USA (NJ) – A 22-year old man has been charged in connection with a bomb hoax that lead to the evacuation of the AMC Freehold Metroplex 14 last Friday during a screening of “Star Wars: the Force Awakens”. “A series of notes were discovered inside the men’s room of the theater around 11:30 a.m. Friday containing threats to the theater. The theater was evacuated and no credible threat or explosives were discovered on scene. The theater was reopened about two hours and 15 minutes later.” CBS NY – 18 December 2015

Australia – An 11-year old boy was molested in a Greensborough cinema toilet. The Age – 22 December 2015

USA (MN) – Marcus Theatres is planning a new multiplex in Southridge Mall, the Milwaukee-area’s largest shopping center. The eight-screen multiplex would have a 44,000-sqft footprint and will be located on the northeast corner of the mall property. Marcus announced in July that it was planning to spend USD $65 million in the next 12 months on new theaters, upgrades to existing properties and acquisitions. Landmark recently closed the nearby The Budget South Cinemas. Milwaukee Business Journal – 17 December 2015

UK – Beverley, near Bridlington, has a new cinema in the Flemingate Development. The six-screen Parkway Cinema opened in time for “Star Wars: the Force Awakens”, making it the first time in 47 years the area has its own cinema. Bridlington Free Press – 18 December 2015

UK – Odeon is updating its Festival Park multiplex near Stoke. It is the first time since it opened in 1988 that the cinema has had a major refit. A local resident is quoted as saying, “It makes sense to renovate the centre to stay competitive with Vue and Cineworld. But Cineworld may take some beating. Maybe the restaurants should have been completed by now.” The Sentinel – 19 December 2015

USA (MO) – The St. Andrews Cinema in St. Charles, which was threatened with closure, has a new owner who promises to keep the three-screen “Dollar house” going. Srini Bhuma will also expand the offering with Bollywood movies. The cinema, the last in the St. Louis area where for moviegoers could see second-run movies for USD $1, was due to close after Labor Day. St. Louis Post Dispatch – 17 December 2015