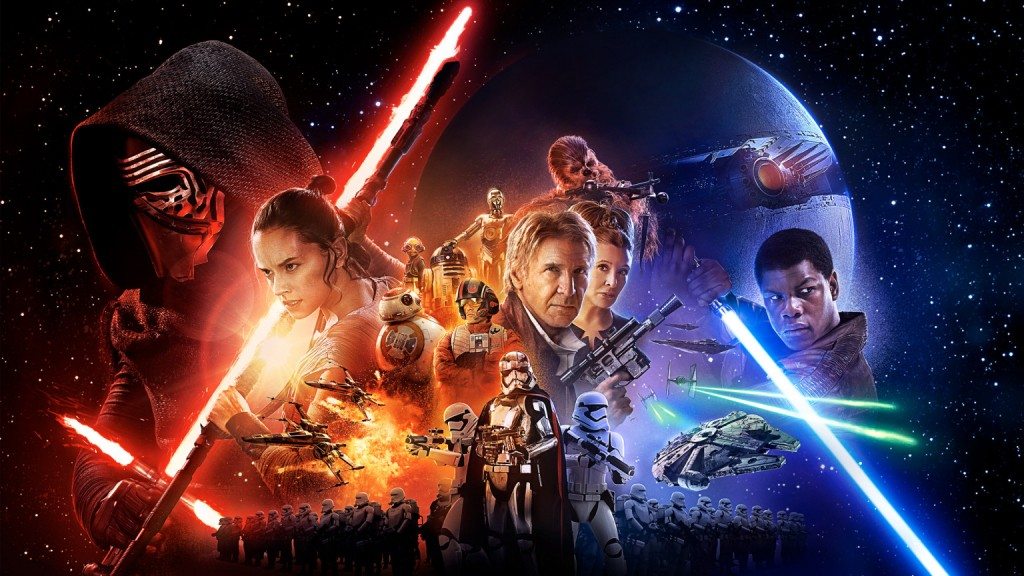 UK – Screen Daily has a long and detailed article by Tom Grater about the ins and outs of booking in “Star Wars: the Force Awakens”, with many smaller and art-house exhibitors caving in to the might of the Force. Lots of interesting nuggets of information. In an average week there are around 15 film releases, but this week only five (of which two are Bollywood and one is a documentary), as few distributors dare to counter-program to the space opera. For the Tricycle Cinema Disney asked for 60% of box office but only a two-week commitment. IN contrast, for “Spectre” Sony asked for a full 18 days. Glasgow Film Theatre is ne of the few art-house cinema not to book “Star Wars”. Screen Daily – 15 December 2015

Germany – Some 200 smaller German cinema have pulled out of a boycott of “Star Wars: the Force Awakens”. They had previously objected to Disney’s cut of each ticket going up from 47.7% to 53% and ticket prices up from €9.50 to €11.50 for a 3D screening. There will be re-negotiations of terms with Disney in January, but cinemas are already queueing up to screen Disney’s next film, “The Hateful Eight”. NWZ online – 15 December 2015

Canada – At least one exhibitor in Canada has followed the lead of cinema in UK and US in banning face masks and toy weapons (including light sabres) from “Star Wars” screenings. Montreal-based Guzzi Cinemas has a general policy against masks and there won’t be an exception for “Star Wars” fans says CEO Vincenzo Guzzo. CBC – 14 December 2015

France – A French exhibitor went to court to obtain a DCP of “Star Wars” to screen. Star and Star Saint-Exupéry in Strasbourg had applied to Disney and even appealed via the CNC audio-visual body, to no avail. He then took the case to the Commercial Court of Paris, who threw it out, and the cinema is now faced with a €11,000 legal bill. “Star Wars” will now screen in the cinemas from 30 December in 2D in English with subtitles. And Le Monde asks “What else is there to cinemas apart form ‘Star Wars’ this week?“; there’s a film about the assassination of Yitzhak Rabin by Amos Gitai, for those that prefer their movies without lightsabers. 20minutes – 15 December 2015

New Zealand – Movie Media has released some audience insights about “Star Wars: the Force Awakens” and (surprise, surprise) it is particularly popular with men aged 30-50, compared with “Jurassic World” and opening night audiences are 70.4% male.

The “Star Wars: the Force Awakens” audience attends cinema 18% less frequently than those that saw “Jurassic World”, meaning that the movie really is attracting people that wouldn’t otherwise come out to the cinema. Press Release – 16 December 2015

Germany – UCI has introduced an ‘unlimited’ card in Germany. The aptly-named “UCI Unlimited card” costs €22.50 per month (minimum 12 months) and offers unlimited viewings of both 2D and 3D films, but excludes special event screenings like sports and opera. UCI has no Imax or specialty screens in Germany, so this ticket is indeed ‘unlimited’. It is the equivalent of three weekend tickets or four week-day tickets. Cinemaxx has a ‘Zeitkarte‘ (time card) that is equivalent at €33.25 per month while art-house chain Yorck Kinogruppe has a subscription model that allows unlimited viewing at its cinemas for €18.90 per month. MoviePilot (DE) – 14 December 2015

USA (CA) – Adam M. Aron has been named CEO and President of AMC and a member of the AMC Board of Directors. He joins from Starwood Hotels and resorts, where his job was effectively made redundant by the merger with Marriott. Interestingly his predecessor at AMC, Gary Lopez, left the company to go into the hospitality business as CEO of Extended Stay America. He gave this interview to Deadline about his plans (hint: they involve a long trip to China). AMC also announced the completion of its Starplex Cinemas acquisition and issued a helpful guide with tips for seeing “Star Wars”; apparently “There are still plenty of tickets available for opening weekend,” but “Reserve your seat now, or get there early,” and “Wear a costume but leave your mask and blaster at home.”  Press Release – 15 December 2015

UK – An insightful article by John (‘Ozseeker’) Sullivan about whether cinemas ‘anchor’ malls in terms of sales turnover. “There is now a wide prediction in the UK that up to 25% of [shopping centre] turnover is anticipated to come from Leisure(cinemas) and the Food & Beverage sectors – a big rise from the 3% formerly attributed to the miserable food courts of tester year.” LinkedIn – 16 December 2015

Ecuador – Calories in a full snack combo contains more calories (2,944) than is required per day (1,800-2,000), as well as containing high level of salt and fat. This unsurprising finding goes on to explain that salt and fat are bad for you, in an article that concludes by noting that “salads are not offered in the cinema.” Strange that soda is listed as 90 calories, which seems either too much (for diet soda) or too little (for regular). El Telegraph (ES) – 17 December 2015

USA (NJ) – The AMC Theatres complex at the Freehold Raceway Mall was evacuated after a bomb threat. No explosives were found and police are appealing for help to find the hoaxer. CBS NY – 14 December 2015

Germany – Ymagis’ Melody TMS is the latest piece of hardware to sign up to the Weischer Media ‘Cinema.Reloaded(TM) ready’ scheme. (Think of it as a THX for advertising, except without a snazzy logo.) Press Release (PDF) – 14 December 2015

USA (FL) – Work has begun on the Riverview 14 multiplex and shopping centre. Goodrich Quality Theatres will be providing the 14-screen multiplex, featuring all-recliner seating as well as a 100-seat upscale burger restaurant licensed to sell beer and wine. The Michigan-based exhibitor has less than 300 screens in 30 locations, but is apparently “eager to stretch its wings in the Gibsonton/Riverview area.” TBO – 15 December 2015

USA (MI ) – Carmike Cherry Blossom 14 multiplex opened this past Wednesday, with tickets for all screenings on the first day (including the Imax screen), costing just USD $2 and proceeds going to the American Red Cross. The next day it was business as usual with “Star Wars: the Force Awakens” playing on 13 of the 14 screens. The new multiplex replaces The Horizon Cinema 10 and The Grand Traverse 9. Record-Eagle – 15 December 2015

The Netherlands – What should be done about this closed 3D cinema? The first full dome cinema in Holland has had to close just a year after opening. Anticipating 260,000 visitors per year it only sold 40,000 tickets. A website petition has been launched on watdoenwemethetinfoversum.nl (“What do we do with the Infoversum?”). Send in your ideas. The Creators Project – 16 December 2015

Of course we felt we had to end with something “Star Wars” related, so double-bill offer you we do. 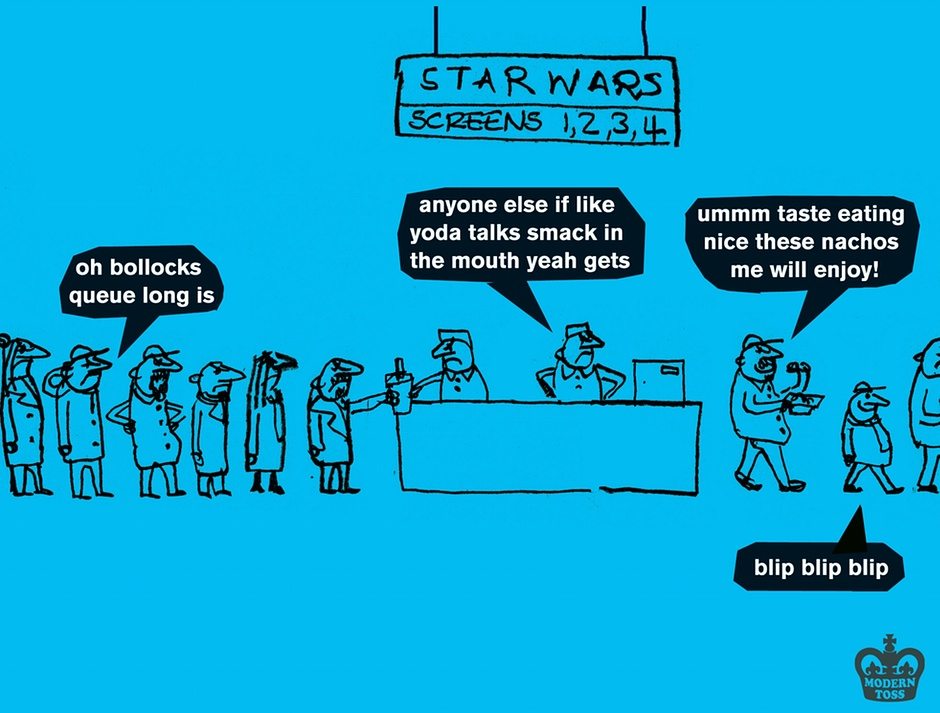