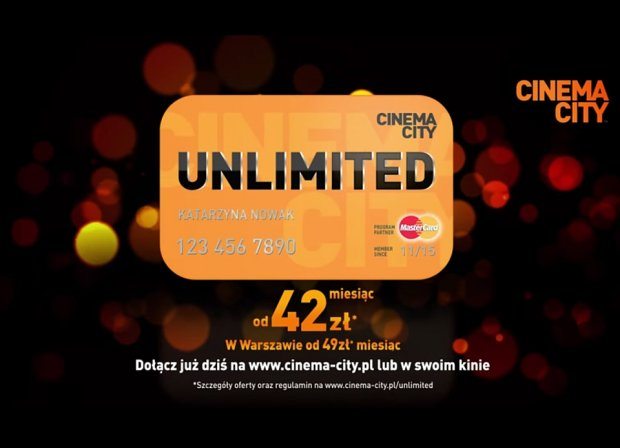 Cinema City launched its ‘Unlimited’ ticket in Poland on 1 December. Priced at PLZ 42 (USD $10.39) for its cinemas outside Warsaw and PLZ 49 (USD $12.12) for its cinemas in Warsaw. The ticket is not valid for special events (such as movie marathons or ‘Ladies Night’) and there is a surcharge for 3D, 4DX, VIP and Imax screenings. The ticket allows for more than one viewing per day, but requires patrons to sign up for a whole year.

Customers can sign up online or at any one of Cinema City’s 33 cinemas in Poland. Patrons have to be at least 18 years old and have a credit or debit card. Their name will be on the card, which cannot thus be shared. With regular Cinema City tickets priced from PLZ 20 (USD $4.95) it means that the ‘Cinema City Unlimited’ (CCU) card pays for itself for anyone visiting the cinema more than twice per month.

At the press conference where the scheme was announced Cinema City CEO Moshe J. (Mooky) Greidinger said that in the UK, where its Cineworld cinemas have been offering ‘Unlimited’ schemes for ten years, there are several hundred thousands of users. The average UK ‘Unlimited’ customer is 29 years old and Expectations in Poland are for 200,000 to 250,000 customers in the first year.

This is not the first ‘unlimited’ cinema ticket scheme in Poland. Last year competitor Multikino began offering ‘Multikino Unlimited’ for subscribers to the NC+ digital satellite television platform who had a monthly subscription plan of at least PLZ 79 were entitled to one cinema ticket per day. Multikino also launched an ‘All Inclusive’ all-you-can-watch-and-eat offer earlier this year for PLZ 69 (USD $17) and PLZ 89 (USD $22), which was not renewed after opposition form at least one distributor.

Tomasz Jagiellio from the other multiplex competitor Helios is quoted as saying that they will be observing the scheme with interest, not just in terms of uptake but also what deal with distributors underpins such an ‘Unlimited’ offer. In addition to announcing the ‘Unlimited’ scheme Cinema City announced that it is building tow multiplexes in Warsaw, one in Lublin and one in Wroclaw.

Greidinger stated that there are two ways of increasing attendance: by building more infrastructure to attract new viewers in under-served areas or persuading existing cinema goers to increase the frequency of cinema visits. He pointed to Romania where average annual attendance rose from 0.4 visits per person in 2013 to 0.6 in 2014. In Poland the statistic is one visit per year, which Greidinger would like to see increased to 1.2 to 1.5 per year, which he would consider a “success”.

For Star Wars fan-boys and fan-girls wishing to watch the seventh instalment of their favourite space saga over and over, this ‘Unlimited’ card is Christmas-come-early.

[youtube]https://www.youtube.com/watch?v=qatoyFwciTI[/youtube]
Follow me
Patrick von Sychowski
Editor at Celluloid Junkie
Patrick was a Senior Analyst at Screen Digest, went on to launch the digital cinema operations of Unique and Deluxe Europe, then digitised Bollywood at Adlabs/RMW, and now writes, consults and appears on panels about cinema all over the world.
Follow me
Latest posts by Patrick von Sychowski (see all)
Send this to a friend