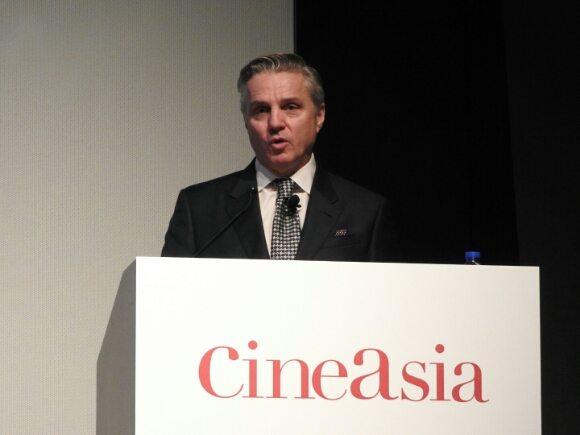 This is a real-time transcript of one of the sessions at CineAsia 2015. As such, we sometimes paraphrase what is being said by the speakers. Any errors are more likely than not our fault.

The MPA’s piracy/IP protection seminar traditionally kicks off CineAsia, with this year being no different. Mike Ellis (above), President & Managing Director, Asia-Pacific, MPA, talked the CineAsia attendees through efforts in Asia over the past year to trace, identify and where possible stop the theft of Hollywood and local films.

“I’ve been doing this for 15 year and glad to be back, having missed the last few years of CineAsia. Want to look at the three ‘C’s of our efforts.

1. Consumer experience – that’s your side of the house. When I go to cinemas across Asia you have some of the best cinemas in the world.  It is a real pleasure. This is a region here some of our films work and some don’t. But it is important that consumers can find them. That is why we are expanding the ‘Where to Watch’ [web portal] from US to Australia, New Zealand and India. Will require help where markets are going digital.

2. Content protection – We all have a job to do, but you [cinemas] are the front line. Want to thank you and your staff in helping with the camcorder problem. Problem hasn’t gone away. Numbers [of piracy incidents are  down, but not significantly. India, China and Philipines remain biggest problem areas. Here is what we are doing:

– Coordination on the ground. I operate across 14 countries in AsiaPac. My teams work with exhibition for training etc. We have one single drive-in in Australia that is a particular problem with being a source of pirate camcorded copies of films.
– Enact anti-camcording legislation. This is working. We had law enacted in Japan 4 years ago and it is making a difference. No real problem coming out of Japan currently.
– Enforcement. It is all well and good to apprehend [a camcorder] but we need police to come and take over. Red zones are China, India and Philippines. In Australia the drive-ins present a particular and unique problems. In China we have had a drop [in incidents] but 15-20 cinema screeens are added every day. As cinemas open in 2nd and 3rd tier cities there will be further problems. NCAC [?] did have a success in catching an individual who got a 6 months jail sentence. – Commitment with local industry enables us to put new ideas on the table. MAD5 initiatives. Looking forward to training with you front line staff. Challenges that we face are always going to be there but working together – particularly in China, but with 5 people on the ground we have to leverage up the relationships. 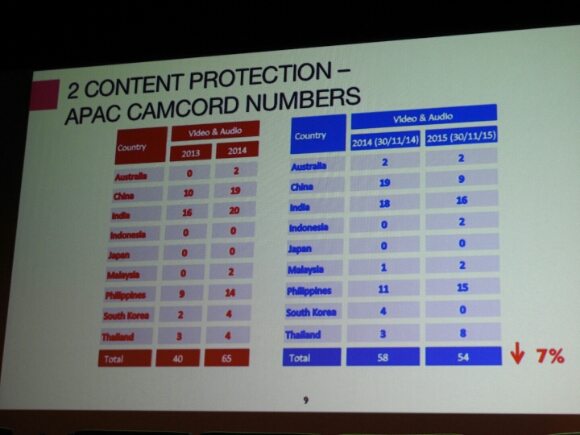 India – We have seen a drop-off, but we will remain vigilant. Not easy when you see the spread of camcording. We only have 3 people there. I thank you for your help. In India, out of 35 forensic matches in 2013, only 50% were identified to the exact city. Only when we can narrow it down and get repeats at the same cinema do we catch the individuals. Many of those screens are single screens. 90% of cinemas we deal with in India are single screens.

Philippines – Has been a constant source of pain for all of us. Part is the attractiveness of the market because films go out in English – appealing for the video and the audio. When I look at it, we know who the individual [pirate] is from the online postings but have not been able to capture him in the cinema. We are working with the police. I want to thank local exhibitors in Philippines. Here is a [cinema PSA] spot developed for the local audience. In some markets the ‘Thank You’ message [to audiences for paying for legal ticket/copy of film] works particularly well. This one [PSA] was an action piece with a local actor. This will continue to be a priority market for us.

Vietnam – We had a good run, no camcorders until early this year. We identified early where the camcording came from. It came down to a particular cinema in Ho Chi Minh City and the vigilance of the local staff enabled his arrest. He was subsequently convicted and given a fine and equipment taken off him. That equipment was valuable. This is not someone who accidentally records it on their phone to show their friends. These are people going in to make money. We are all victims. I take my hat off to everyone in Vietnam. Took place at CGV Ho Chi Minh city.

MAD5 – on the front it is popcorn. There is a site called PopcornTime. We had a massive operation against this. This was a major problem for us. Originated in Australia.

Not just exhibitor partners but also with the police. We have to be careful with VIP screenings.  Great when we can invite government officials to help sell the cinema experience. World IP Day – driven out of Geneva, not a US initiative. Thank you when you the cinemas and distributors and sometimes US Ambassador on the ground when we can show that. Thank you for that.

Exhibitor leadership in Australia, Singapore and Indonesia – where we have seen incredible results. Village [Ciemas in Australia] has been at the forefront of lobbying for site locking (?) and very good at giving up 30 second slot to promote the industry. I don’t take it for granted and Australia at this. $6 million dollars exhibition.

Singapore – Exhibitors at the forefront of site blocking lobbying with the government.

Indonesia – Site blocking is like border check. We have had a good run there.

The most important thing I want to say is ‘Thank You’ for engaging with us and as we move forward, to work with us and that your staff work with us and how they are safe and not put themselves in danger. Thank you to them on the ground, they are our front line and without them we wouldn’t get the results and deliveries that we have.

[And with that the MPA seminar ended. The fight against piracy is not hopeless, but it requires eternal vigilance.]
Follow me
Patrick von Sychowski
Editor at Celluloid Junkie
Patrick was a Senior Analyst at Screen Digest, went on to launch the digital cinema operations of Unique and Deluxe Europe, then digitised Bollywood at Adlabs/RMW, and now writes, consults and appears on panels about cinema all over the world.
Follow me
Latest posts by Patrick von Sychowski (see all)
Send this to a friend