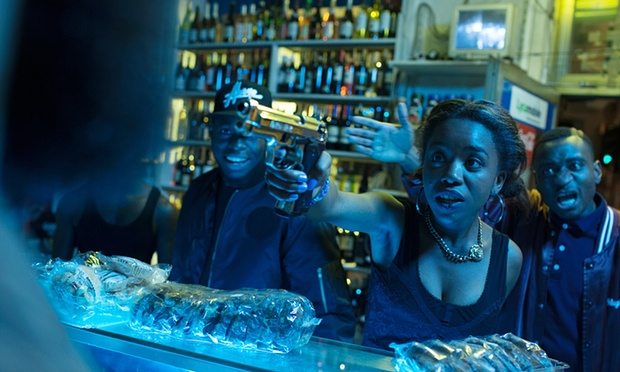 Belgium – A riot broke out at the Kinepolis cinema in Brussels screening the gang-themed film “Black” last week. Under-aged patrons entered the sold-out screening and refused to leave. The movie has attracted controversy, not so much for its Romeo-and-Juliet plot as for the ’16’ rating that meant that many teenagers were not allowed to see it. Screendaily – 13 November 2015

USA (TX) – iPic has launched a fresh lawsuit against Regal and AMC over “clearance”, i.e. the practice of larger exhibitors getting exclusive screening rights of popular films. The move comes as the Federal Justice Department investigates the practice, while attorney generals in 11 US states have also started their own probes. iPic is asking for a temporary injunction that would block its largest competitors from playing any film that also plays in iPic. WSJ (paywall) – 17 November 2015

Spain & Austria – With the Dolby Cinema release of “Star Wars: the Force Awakens” now confirmed, the race is on to get more auditoriums up and running. This past week saw the unveiling of the first Dolby Cinema in Spain at the multiplex in La Maquinista shopping centre in Barcelona, which belongs to Cinesa (part of Odeon & UCI). It has 400 seats, 60 surround speakers and two laser projectors. The latest “Hunger Games” will be the first film, followed by “Star Wars”. Meanwhile in Austrian Linz Cineplexx has opened the first Dolby Cinema in a German-speaking territory. Tickets to it have a €2.30 surcharge. Cineplexx has spent €4 million to refurbish and upgrade the Linz multiplex over the past 50 days. There were previously two Dolby Cinema installations in the Netherlands. Blickpunkt:Film (DE) – 18 November 2015 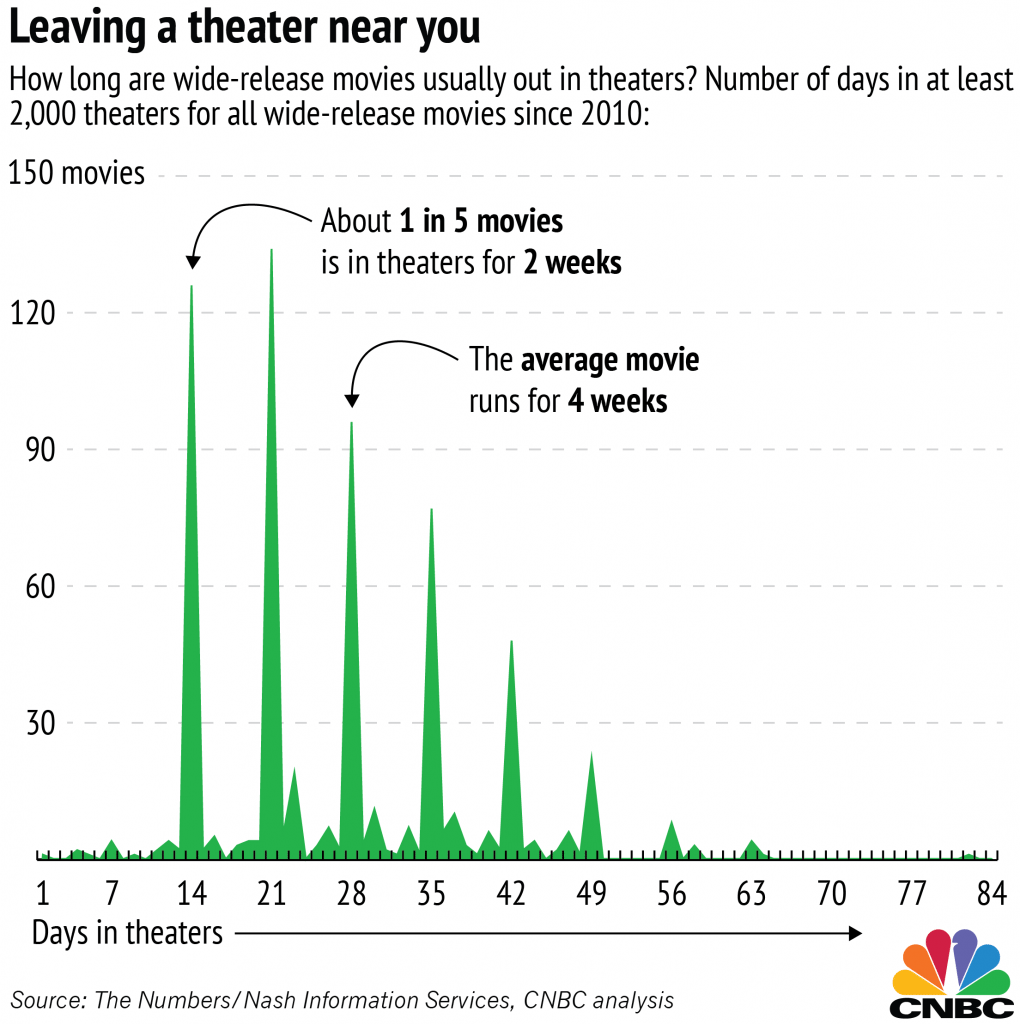 USA – Should we be surprised/shocked/sad/outraged that the “Steve Jobs” biopic went out of wide release after just two weeks (never mind “Jem and the Holograms)? It seems that this short lifespan of cinema films is more common than we realise. CNBC has Big Crunch-ed the numbers and come up with some pretty graphs and the insight that one-fifth of all films suffer the Jobs/Jem fate. Worth reading the article in full, but what it doesn’t capture is the looming fight between cinemas and studios over how soon a film should be made available online (forget DVD) after it disappears from cinemas. CNBC – 17 November 2015

Germany – Ten years ago there were an average of 300 films released per year in Germany. Now it is closer to 700. The head of Hamburg’s Kinos Abaton, Matthias Elwardt, says that it is simply too much to have 15 new films open each week. “We need fewer but better films” (a refrain that is also heard often from cinema trade body UNIC). Deutschlandradio Kultur (DE) – 19 November 2015

UK – This week was the UKCA conference in London. Odeon’s Commercial Head Ian Shephard gave the keynote. He had a stark message for the fellow exhibitors in the room.

“Customers, technology and the world have changed. We need to keep a weather eye on the industry we’re building for the next decade and the decade beyond that.”

His message that “cinema is a hospitality experience” is one that also cannot be stressed enough. Screendaily – 17 November 2015

USA – On the other side of the Atlantic there was the MKM Partners Entertainment, Leisure & Internet Conference in New York. The exhibitors who spoke there were bullish about the outlook for 2016. “The more and more 2016 has come together, the more impressive it looks,” Cinemark CFO Sean Gamble said. Regal Entertainment Group CFO David Ownby said that “We think about the business as very stable” and it is “hard not to be excited about being in the movie business.” Apparently relations between cinemas and studios are “very, very good” too. THR – 19 November 2015 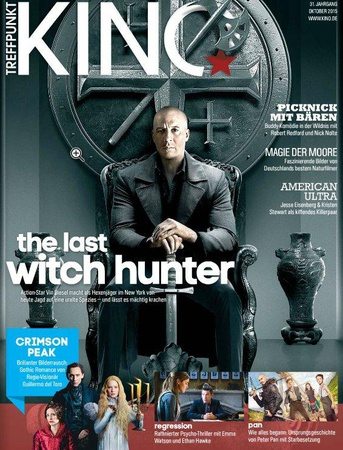 Germany – The publisher of Treffpunkt Kino and Kino & Co. has bought out the stake in Kino&Co Media GmbH previously owned by Busch Entertainment Media GmbH in Kinofoyer GmbH. In addition to the two film magazine the group also publishes the consumer magazines of Cinemaxx, Cineplex, CineStar and UCI Kinowelt that between them have around two million readers. Busch Group will focus on B-2-B publications like Blickpunkt: Film. Media biz.de (DE) – 13 November 2015

Germany – The minority partner of the Babylon cinema in Berlin that’s been subject of an extended labour dispute has filed for insolvency. Toby Hackle owns 49% of the venture, with the 51% majority owner Timothy Grossman having raised eyebrow with his Nazi-symbol inspired protest at the striking staffs’ call for boycott of the cinema. Grossman is said to have been surprised by Hackle’s action. Berlin Morgenpost – 17 November 2015 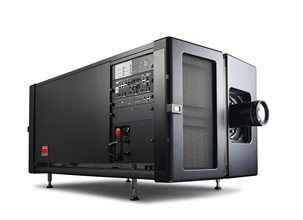 India – India’s fifth-biggest multiplex operator Miraj Cinemas will add 15 screens before the end of this year and is exploring acquisitions. Founded in 2012 it currently has 54 screens.

“We are present in 11 states and we will be exploring another four to five states in the next six to eight months. This year we should have around 70 screens. Next year Diwali, we should have 100 screens,”

Miraj Cinemas’ MD Amit Sharma is quoted by PTI as saying. (These are also the right sounds to be making if you want to get bought up.) Economic Times – 15 November 2015

France – Robbers managed to steal €45,000 from a Mega CGR cinema in Torcy last Sunday. Two men, wearing hoods and sunglasses, armed with a gun and a knife, entered at 23:25, neutralised five employees and fled with the content of the safe, which had several day’s worth of BO takings. Le Parisien – 16 November 2015

USA (CO) – Fandango and National CineMedia (NCM) have formed a strategic partnership focused on content, marketing and data relationship. The deal will amongst other things bring Fandango’s original video content to cinema screens across the US as part of NCM’s “FirstLook” pre-show. “The deal will also exclusively provide NCM with a select aggregated set of Fandango’s moviegoer demographic data, which NCM will combine into its broader data management platform, enabling more effective in-theater advertising and content targeting for NCM’s marketing partners.” Press Release – 18 November 2015

Germany – Smoke and fire forced the evacuation of a cinema in Scharbeutz, near Bad Oldesloe. Cinema goers and staff were safely evacuated and the fire was extinguished. The cause of the fire is not yet known. HL-Live.de (DE) – 16 November 2015

France – The UGC Ciné Cité de Strasbourg was evacuated due to “a technical problem”. Allegedly one of the exists was blocked. With the recent Paris terrorist attacks, nerves were obviously frayed, though there was no reported panic.  DNA.fr (FR) – 15 November 2015

India – In what must count as one of the most unusual incidents in cinemas, two men attacked by honeybees while attending a cinema in Aurangabad. Two men were attacked by a swarm from a nearby beehive during the intermission of an afternoon screening. “Eyewitnesses said that the beehive was near the multiplex and someone may have played mischief to evoke the bee attack.” Times of India – 17 November 2015

UK – A man suffered a heart attack at a Cineworld in Bury St Edmunds last Friday night. The man, said to be in his forties, was defibrillated at the scene before being taken away to a local hospital by ambulance. It is not known which film he was watching, but this sort of incident is a reminder about why all cinemas should have defibrillators on site and train their staff in how to use them. Bury Free Press – 16 November 2015 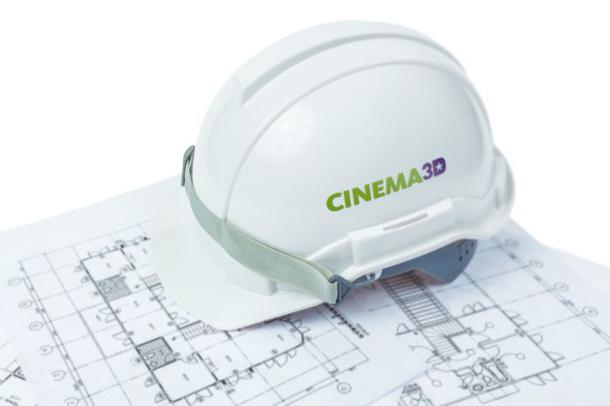 Poland – Work has begun on the latest Cinema3D multiplex, this one in the central mall of Glogowie. The cinema is due to open in the spring on 2016. MediaFM (PL) – 18 November 2015

USA (TN) – A new multiplex opened this week in Sevierville, supposedly built in record time (six months). The Grovenor Crossing stadium 14 is owned and operated by Southeast Cinemas, which also owns several multiplexes in North Carolina, South Carolina and Virginia. The cinema features electronic recliners with footrest in each one of the 14 auditoriums. Wate.com – 19 November 2015

I’m afraid we have to end on a somber note. With the Paris terrorist attacks still fresh in everyone’s minds (apart from the “tragedy hipsters” mourning Beirut, Kenya or an even more obscure atrocity), it should perhaps come as no surprise that the fourth and final “Hunger Games” film opened to muted box office in Paris. Very muted box office, according to Cinema Blend:

Wednesday is the traditional opening day for movies in France and opening day numbers were down by 40% across France, and by 50% in Paris specifically, compared to what the first part of Mockingjay did a year ago. In addition to the attacks themselves causing people to stay home where they feel safe, French police action on Wednesday itself also likely led to even more people staying home, either because they weren’t sure what else might be unfolding or simply because they were watching the news in order to see what happened.

Even though Paris BO as a whole is only down 21% it seems that parents are keeping their children home in great numbers, meaning that Katniss Everdeen is not getting the expected footfall.

Don’t let the terrorists win! Be vigilant at all times, but above all, keep calm and go to the cinema. 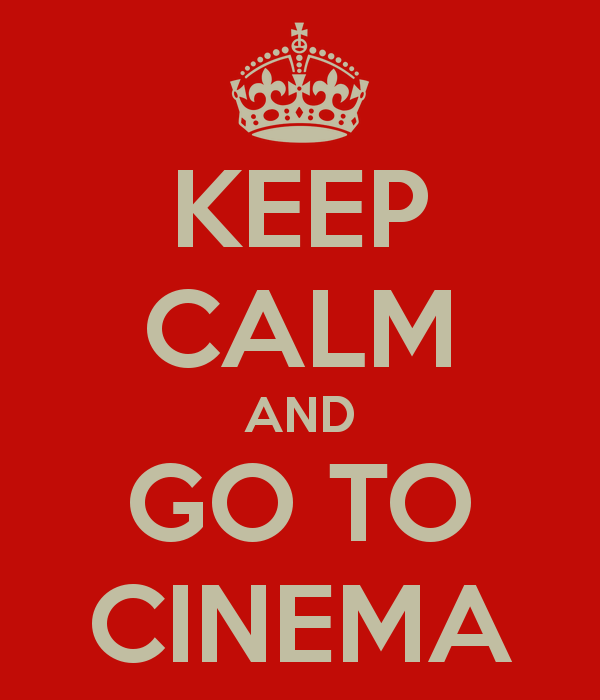