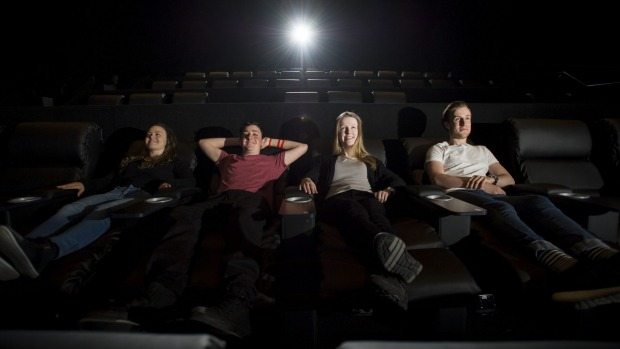 Australia – Recliner seats as standard are the “new normal” at Hoyts, according to Simon Ruhfus, manager at Hoyts Woden, which together with Hoyt’s Belconnen site is getting recliner replacements in ever row or every screen. And prices won’t go up either. At least not yet. Seating capacity is being cut by 50%, so there will be “more of a fight” for tickets. Upgrades at the two sites should be ready in time for Bond on 12 November. There will also be alcohol licence from December. All-in-all six Hoyts sites across Australia are the test network for recliners. If they are judged a success, Wanda-owned Hoyts will roll them out to all sites. Canberra Times – 31 October 2015

India – Allegations of shady dealings have been raised about the surprise acquisition of the 11-screen Luxe Cinema in Chennia from SPI Cinemas by the unknown new entrant Jazz Cinemas. The owner of Jazz Cinemas’ parent company is said to be a close friend of the state’s chief minister J Jayalalithaa. A major opposition politician has claimed that the cinema’s owners were “arm-twisted” through government agencies and the police to sell the cinema to a powerful distillery-owning family. Two other multiplexes in Chennai are also said to be under pressure by the same group to sell, presumably for a below-market price. The cinema had been struggling to get government-issued licences to screen films for almost a year. It certainly is a peculiar transaction. Times of India – 31 October 2015

Australia – SMH carries a profile of Openair Cinema’s head Alex Khadra-Bosse. What started as a ‘little’ cinema in Bondi became a business that doubled each year. When he started he had to ‘beg’ for sites, but now it is local councils that are doing the begging to have Openair Cinema come to them. But over the past decade the German-born ex-Accenture man has opted for slow-but-steady growth. Sydney Morning Herald – 31 October 2015

USA (CA) – Dolby’s fourth quarter was characterised as “weak” but there was major uptick in the adoption of Dolby Cinema and (more importantly for its revenue) it will start shipping televisions incorporating Dolby Vision in the coming quarter. Dolby is now targeting 50 Dolby Cinema sites before the end of 2016. Previously the aim had been 50 by there end of 2018, so a two year faster roll-out. 100 sites is the target by the end of 2014. Seeking Alpha – 29 October 2015

Malaysia – The acquisition of two Cathay Cineplexes operations in Malaysia has been completed by Mm2 Asia (through its wholly-owned subsidiary mm2 Screen Management Sdn Bhd.) for RM40 million (USD $9.83 million). The deal comes hot on the heels of Mm2 signed a binding term sheet with Mega Cinemas Management Sdn Bhd for the acquisition of cinemas at three locations in Malaysia. Mm2 has presence in Singapore, Malaysia, Taiwan and hong Kong, with a main focus on production and distribution of film and TV content. Marketing Interactive – 2 November 2015

Germany – Krone Cinema has beaten 55 other cinemas in Baaden-Wuttenberg to the €15,000 prize money for being the Programming Cinema of the Year 2014. The money has to be invested in modernising the cinema. The small cinema was the surprise winner of the competition, which hands out €190,000 from the State to encourage wider film programming, as normally larger art-house cinema in cities with major student populations tend to win. Badische Zeitung – 30 October 2015

Holland – A virtual reality (VR) pop-up cinema is opening soon in Utrecht, after a similar concept was tested in Amsterdam. The “cinema” will open on 27 November in the Asian restaurant LE:EN located at Heuveloord 140. The idea is to rotate a series of film and documentaries that were specifically created for the format. UtrechtCentral.com – 1 November 2015

France – Is it me or are exhibitors particularly litigious in France? The court case between Mega CGR and Étoile Cinémas before the Douai Appeal Court has been adjourned after lasting less than an hour. The case revolves around the payment by the city of an investment grant. Even if Étoile Cinémas wins Mega CGR plans to appeal. If the case is resolved building work is expected to start in February 2017 and last 12 months. La Voix du Nord – 30 October 2015

Germany – A technical problem was to blame for the fire in the Cinetech cinema in Gronau last Thursday morning. Some €500,000 of damages were done to the cinema, with the cause identified as a faulty switch. No films are being shown unit further notice. Patrons with tickets will be able to use them at other nearby cinemas or get a refund. Westfaliche Nachrichten – 30 October 2015

UK (Scotland) – Merlin Cinemas has taken over the running of the northernmost cinema on the British mainland. Thurso Cinema will re-open in november with the screening of the new James Bond film. The cinema had closed in September after a winding-up petition was issued by HM Revenue and Customs in July. Penzance-based Merlin Cinemas specialises in refurbishing and operating small rural cinemas. The Press and Journal – 31 October 2015

UK – Cineworld’s new screen in Hinckley is set to open on 4 December. The five-screen 787 seat (157.4 seat/screen average) will be the first cinema in Hinckley for over 20 years. The cinema will screen Hollywood, Bollywood and event cinema and employs 25 people. The Hinckley Times – 30 October 2015

UK – The former Odeon cinema in Edinburgh’s Southside has been acquired by millionaire Stefan King. His G1 Group operates the Grosvenor Cinema in the Glasgow’s West End, as well as the seven-screen Imax Playhouse Cinema in Perth. There is a hope that the art-deco building, which was threatened with demolition until a petition campaign saved it, will be re-opened as a cinema in the future. G1 Group, however, also operates the Corinthian Club in Glasgow and has not stated its plans for the site. The group has confirmed that it will not be turning it into a ‘superpub’. Herald Scotland – 1 November 2015

UK (Scotland) – One of the last survivors of one of Britain’s worst peace-time cinema disasters has died age 91. Jim McCallum was just five years old when the Glen Cinema disaster took place on Hogmanay (Scottish New Year’s Eve celebration) 1929, killing 71 children when smoke from a smouldering film canister caused a panic and a crush. Jim and his two brothers narrowly escaped, but never forgot the terrible event. A memorial is still held each year to commemorate the disaster that is known as Black Hogmanay. Daily Record – 31 October 2015