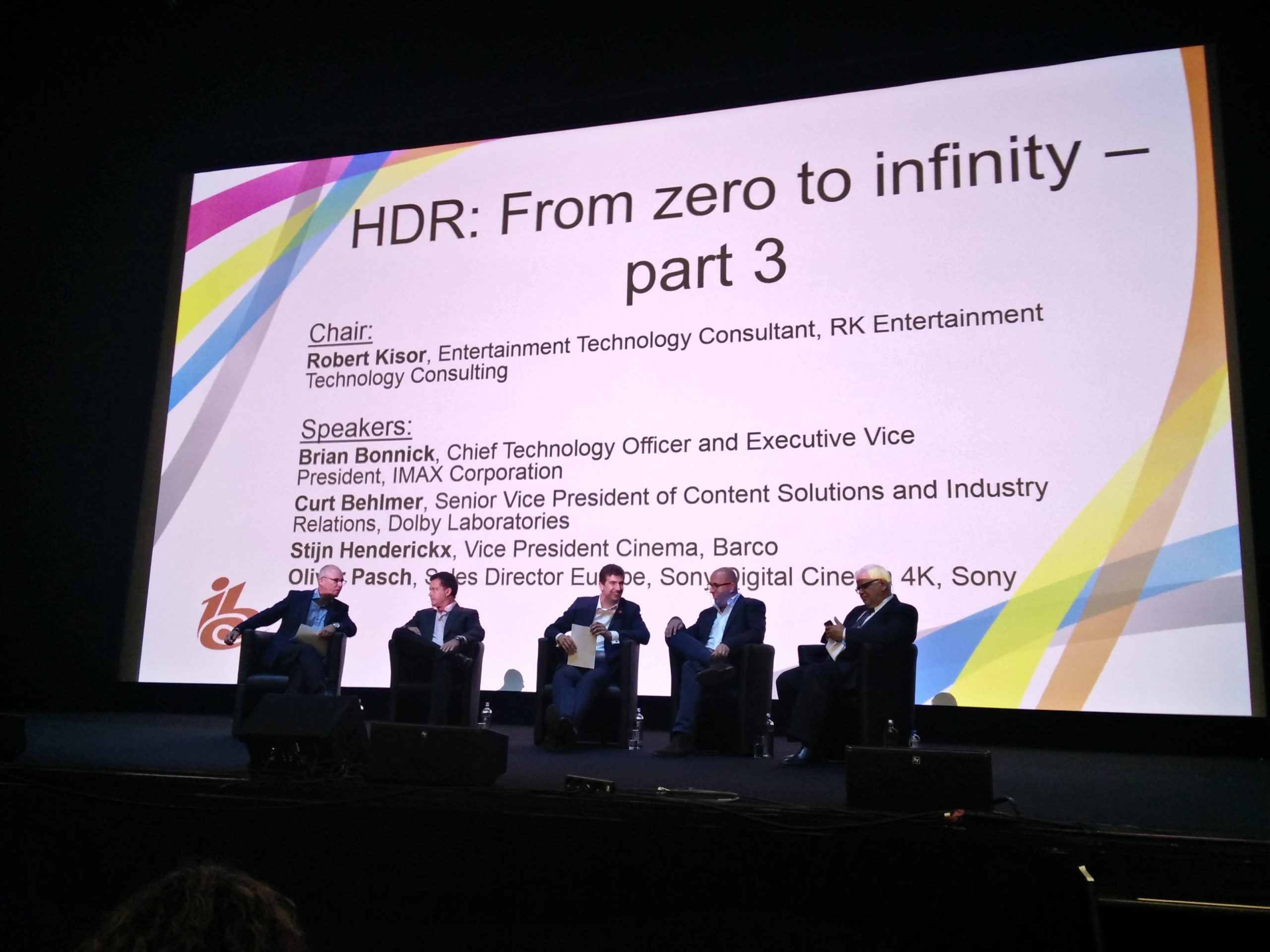 “In this third session of our trilogy on Cinema HDR, we will engage with a panel of experts on the technology and challenges of HDR and wide colour projection in exhibition.”

“HDR has an impact on audience experience but it is subject to law of diminishing returns.”

“Will HDR lead to increased profitability? We don’t know if it will draw additional people to the cinema or pay additional upcharge. So revenues are not known.

But HDR ads significant cost to the exhibition industry. You need to change almost everything about the auditorium – full overhaul of theatre interiors.

“Definition of HDR for theatrical exhibition is an open task. It is going to be a lot of things.

HDR focus and future targets:
In nature it is a million to one (20 tops apperture)
But for human eye 13 aperture = 10,000:1 given that human eye can’t switch immediately from bright daylight to night.

Business reality. Next geeneration of mainstream needs to:
– Deliver a visibly better than series 1 projectors
– a lower or equal cost of ownership
– a financial model for post-VPF era (Sony has established ‘managed service’ for switching to next generation for cinemas)

6 criteria for image quality that have to be met in the Sony lab in resolution (Tokyo 2020), high frame rate, brightness, extended color space, HDR (contrast ratio – already close to 10K to 1) and total cost of ownership.

Bob Kisor start off the Q&A discussion with some simple questions:

What does all this mean for technical support that cinemas have to provide in booth or mutiplex? New paradigm? How will it work?

Brian – 1st benefit is lasers last 30,000 hours so don’t need to be changed so often. Laser RGB do not degrade at same time so this has to be managed over time. We have been implementing an automated system with industrial camera that looks at the screen and calibrating every day. As far as rest of booth goes it is business as usual.

Curt – I would agree. Laser doesn’t require the same safety and maintenance, but new things to learn. Local regulation for lasers. People like LIPA are working on it. Largely business as usual. Typically a booth requires more extraction but other is similar.

Stijn – I would full agree, espcially for maintenance perspective it is business as usual. As Curt mentioned, you need to be compliant with laser safety. But quite minimum impact on daily operation.

Oliver – At the other end of the bandwidt laser will enable us to build smaller projectors. So we will be able to build booth-less projectors.

BOB we have laser, xenon and mercury and all this legacy will be out in the field. Laser will render same as Xenon, will this continue to be the case or will we see color [?] on the screen?

Curt – Even with 35mm you would see shift in colour for various reasons. The primaries that we have chosen encompass all of P3. Interesting to see how industry handles full gamut. I can’t imagine anyone building systems that don’t accomodate P3 specification.

BOB so if system is tied in mastering for a particular DCI projector so we can assume the colorimetry will be same for projectors in the field.

Curt – We should be able to use the same methods to calibrate those projectors.

Oliver – I’m with Brian we need to see more auto-alignment equipment in the field.

BOB – Dolby system uses a white screen. For you others, is there an issue what type of screen, if it is matt or silver? Do you care what the different systema are?

Brian – Our screens are custom manufactured to fit our system. The biggest issue you have to consider is screen gain. Also have to contend with speckle, which is enhanced with brightness. There’s trade-offs in the equation. But if manufacturers do it right it is balanced.

Stijn – I couldn’t agree more. BArco has invested heavily to have best de-speckling technology. But gain element is important. Hard to go beyond gain of 2 with laser projection.

Oliver – Gain needs to be adressed more than it has been to-date. At Sony we don’t believe that vibrating screens to adress speckle is the way forward.

BOB opens to questions from the floor.

BOB – It does help to keep dust off screen.

Questions from the audience.

Julian Pinn – Too early to have data on BO of Dolby Cinma?

Curt – I don’t want to share financial data – that is exhibitors’ business- – but the exit polls have been very positive. Encouraging to date.

Emidio from Italian IT magazine – IT magazin: Worst LCD display get 10 tops. Top high end LCD is 4000:1. But OLED and plasma you get more than 18 stops. My bottleneck is Minolta measure tool. This is consumer market. Does it make sense to talk HDR in cinema compared to consumer mrket?

Stijn – From Barco perspective we are also making displays so we know the difference. What you can achieve with display and projectors are just not comparable. You cannot make a display as large as projected image.

Curt – There is no definition what HDR is for cinema but the same is true for the consumer market. Short of a definition I am looking for creative or audience reaction. And to me it is like nothing that people have ever seen before. It is being able to see black blacks and bright brights and color volume. You can saturate colours more.

BOB – it is a total experience and for consumers you can get thse measurement in test environment but you will not get that in the home. But cinema is immersie environment when you add also audio – whether immersive.

Brian – People are getting hung up on specs. We stopped in Imax a few years ago to supply specs. In the home it is not an immersive experience. Going into cinema where my field of view is completely filled. Creatives say they make their work for the big screen.

Brian – In home you have DVD or Blu-ray which is heavily compressed, which is not what you get in the cinema. Mathematically you might be correct that higher sequential in home but that is not the experience.

Q – Do you have to capute natively in HDR to display HDR? I assume Dolby will charge more for an enhanced experience. How will you sell the movie going public on a specific site?

Curt – In reverse order: from Dolby Cinema it is partnership with exhibitor with whom we have a revenue share, but the exhibitor sets the price. If they want to pay more, that’s up to the audience. So we are not changing the market in that way. The technology is expensive, so it will not be in small screens in neighbourhood theatres. We are working on cost reduction so we will see it over time, but today it is a premium epxeriemce. Secondly, HDR is in the capture, whether camer or CGI, but traditionally it was not able to be reproduced. Good news is that from production aspect nothing has to be changed. No need to change the equipmetnt on set or how people are working. There is a lot of dynamic range in cameras that is not being used.

BOB – Follow up to that. Based on surveys that you have taken or other information do you believe the average movie going audience discerns a difference between an HDR or SDR movie when they see it as a single stimulus? If it hadn’t been promoted as HDR?

Curt – it depends on the content. Some of it will be more HDR-ish. But, yes, we have seen that people do notice it. It is deeper and richer black and colour saturation.

Brian – Our Xenon has been out for many years and it has 40% better sequential [contrast?]. For laser we have noticed sharpness. There is no question people have noticed. They can’t always verbalised it but they know that the image “popped”. Same with HFR. What people’s eyes notice will pay the bills.

Stijn – We have several exhibitors that are upcharging for the laser projection. We have increased contrast 60% with laser alone.

Phillpe, Ecran Total – Good to see Brian. Marketing question. What do you think of HDR as a brand. Will it be marketed with that to audience or will it be a Dolby Cinema or Imax+ label?

Brian – We promte the Imax experience, not the technology. GV – giant venue. Purpose built solution for the largest of screens. So we are not doing marketing campaign per se.

BOB – We have run out of time but thank you to our panelists.