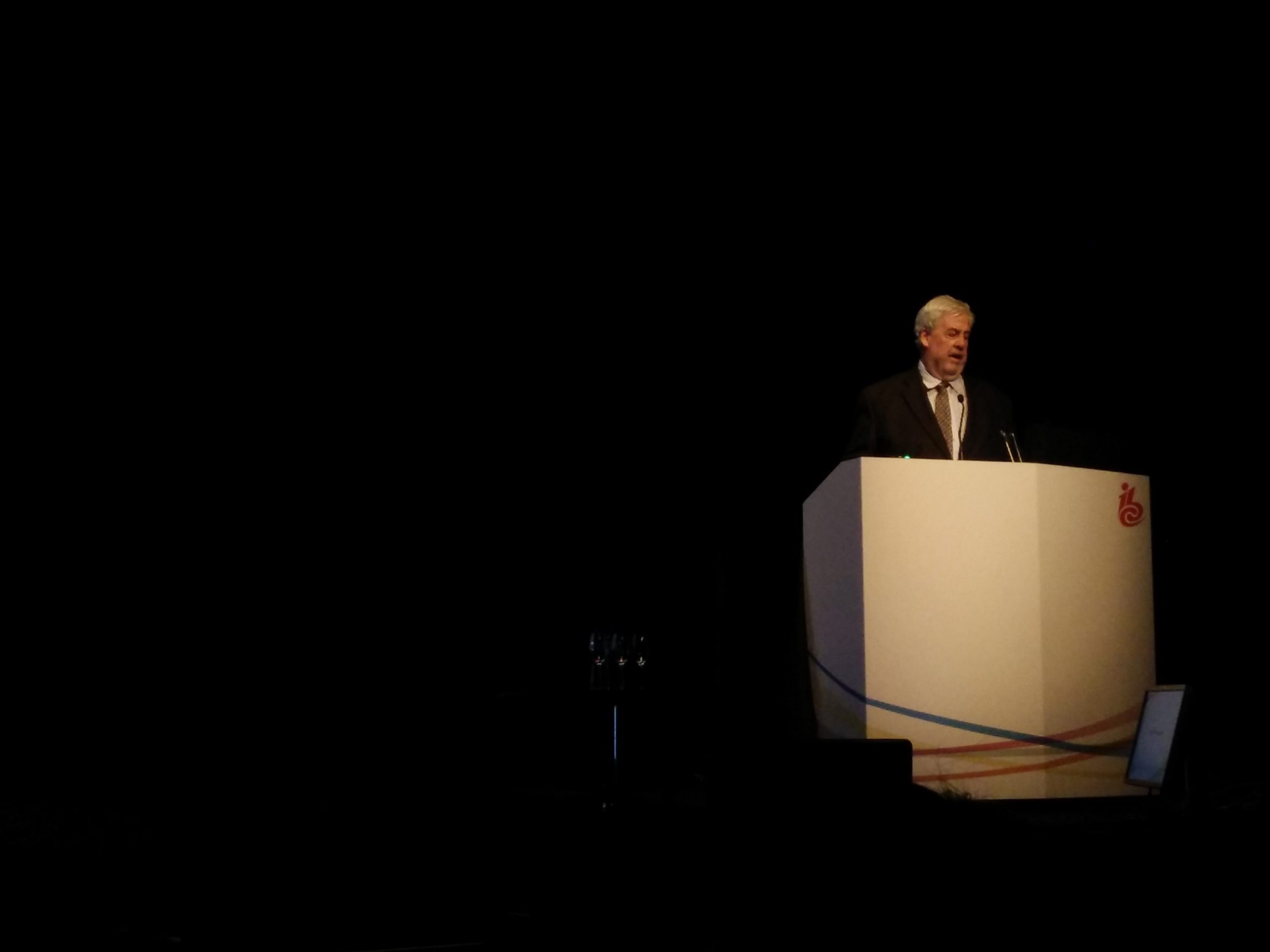 Session producer Ludé began by looking back at the history and precedents of virtual reality (VR) and immersive cinema, including sci-fi author Hugo Gernsback VR precedent and Cinerama, with its three projectors and surround sounds innovation. “The business model was expensive,” Ludé observed, “as it required five people to operate.” Then “You need cameras – Vitarama in the 1940s. Now you have GoPros stuck together.”

Schilowitz was joining the IBC audience “via the World Wide Interwebs,” Ludé, as the Skype connection was made with the West Coast. “It is 2:38am here in LA. I’m drinking from a VERY big coffee mug,” Schilowitz joked. He then proceeded to show off all his VR headsets and home cinema screen.

“Last night we did our final check of ‘Mazerunner – the Scorch Trials’. We’ve been working around the clock on that.” He then runs 5 minute video about what Barco Escape is.

“The word ‘immersive’ seems to be the buzz word. All of that was shot with RED camera sitting in the back of the theatre, so nothing simulated.

Current state of affais is that it [Barco Escape] is three Scope screens connected by gaps. Idea is to take it to scale, so we are retrofitting theatres. We’ve done a little over 20 for ‘Scorch Trials’ that opens this weekend in US, already open in Mexico.

Initially it was not a DCI compliant system, but now it is upgraded to be DCI compliant, running off Alchemy. Two screens on the side 105-110 degree angle.

Comment in the video is that you can’t get this at home. Even if you strap something to your head, it is not same as sitting with a group of people.

Mazerunner has a bit over 20 minutes of panoramic content. The original had 10 minutes and played in 7 theatres, This one just over 20 theatres.

Next week is major VR event. Soon we will see consumer launches of the first high-end teethered sets from Occulus, Samsung, Google Cardboard.

I have these VR headsets strapped to my head for as much as 8 hours per day. Working on something special for The Martian.”

I cannot wait to watch Mazerunner 2 as well. Grateful to be here talking to you today. Will also show a video about ScreenX.

Barco Escape use 3 DCP projector, we use several LCD projectors. We do not modify the wall.

Hopefully next year we can have a ScreenX so I don’t just have to show you a simulation.

What we call advertising is 30 to 60 second films of beauty. It creates stand-out aesthetic point of view. We do it in Korea and Cina and we hope to do it for a global market.

Next category is music concerts.

Compared to adverts, for live performance we tried to be live on set and capture the moment. Doing OdysseyO was tremendous experience. It gives tremendous energy to the audience.

ScreenX live we send our crew to the concert and have signal from that concert projected in our cineas. We still have long way to go but this gives out audiences a great experience.

Next we will show behind the scenes of a movie we completed last year.

77 screens in Korea, 4 in China, 2 in US, 1 in Taiwan. Wanda hopefully opening more and working with them on production of a ScreenX film.

From ScreenX t 4DX it offers a magniture of options for cinema goers, studios. Made stories available in a completely immersive way. We plan to revolutionise the going to cinema.

“I’m goig to be a tiny bit out of my comfort zone because I’m so used to being up here and talking 3D. We are deep into virtual reality. But it is never about the technology but what you do with it creatively to make it interesting.

Everyone here probably knows us as 3Ality. Best known 3D cameras in the business. Recommends ‘The Martian’ in 3D stereo.

3mersive chosen by n/Nokia to help develop the new VR camera OZO
Nokia used it to shoot demo projects, includng Marriage Equality VR and The Wedding.
3mersive is in a non-exclusive alliance with Jaunt VR as preferred product partner.

VR is further along than anybody realises.

People find the experience cool, rather than the content. But is content better in 360 degrees than 16:9? What justifies it in 360 degrees? If it is because it is cool, than it is not good enough. It has to be better.

For me one of the interesting areas is news. If you are in a conflict or protest or a fire then it is happening all around you.

We need the development that brings in a close-up to a 360 and other narrative tools. That is when audio comes in (to direct your attention). Audio is so important in VR, because we can steer audience’sattention. Audio is 60% or more of the VR experience.

Audio adds the immersive aquality of the VR experience. Audio achieved through isolated tracks and 7.1 mix.

Introducing the “Neo” camera. Easy system that you just drop off. “I’m recording this session now.” [A NEO camera stands next to him, staring in each direction with its omni-directional camera lenses.]

“Cinematic VR will transform music: You can buy $500 for a front row seat but you can’t be on stage with Rhianna, but VR can. Sports is interesting for VR. Courtside seats are $240 each. But will be difficult to compete with TV in the short term, because production is quite high. For sports it is more interesting behind the scenes and locker room of your favourite athlete.

Cinematic VR will transform film: Just being on a beach is interesting, but will be boring pretty soon. Narrative is important. When film started it was treated as stage play, but soon moved away from that, but VR is now going back to that direction.

Cinematic VR will transform advertising: With news you get a very unbiased view. CNN will tell you where to look, but it is your choice where to look. Travel is another area. We filmed in Nepal before the earthquake. Education and training for demonstrations. Few distractions.

And with that the Immersive Pictures session ended. Combined surround screen and VR worked surprisingly well, though you had to be there and see it to appreciate it fully. Maybe next year IBC will stream the Big Screen session in full VR 360 degree glory.