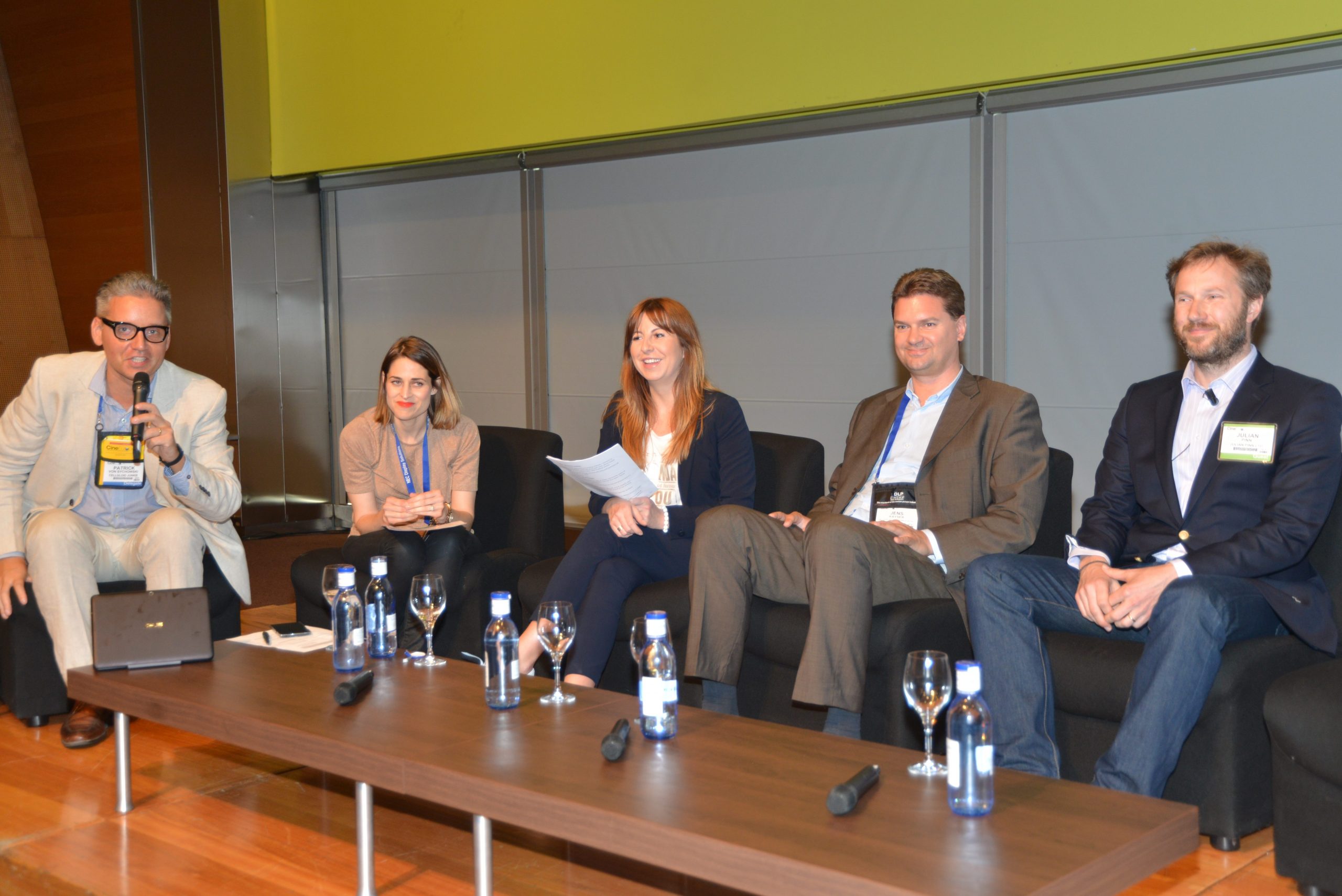 This post is a transcription composed in real-time during one of the many seminars at CineEurope 2015 in Barcelona, Spain. As such we often paraphrase the presentations being given. It was made more challenging by the fact that I was also chairing the session.

Cinema Advertising is together with concessions the cornerstone of cinema off-screen profitability. Having gone digital in many countries ahead of film projection, cinema advertising has had almost a decade of big screen digital innovation.

This panel tapped some of the industry leaders, representing a broad geography and a diverse field expertise to learn more about how to make (more) money in digital.

From the session description: “Digitisation of the cinema sector has made the big screen once again an attractive advertising option for brands, allowing it to compete with TV and online.”

Began by talking about the transformative effect that cinema advertising in digital has had on the UK market. “Digital offers advertisers an incredible agile media. They can more effectively target. Advertisers can now make the most of a short-term opportunity, such as a succeful box office weekend.”

“Cinema is now also seen as part of an audio-visual range solution. When TV pricing goes through the roof, they can divert and put their ad in cinema. They can react to competitors, so they phones up [Pearl & Dean] over the weekend and asked to be on screens on Monday. Advertisers can be more flexible by being part-week campaign. Smart targeting of lottery jackpot for a big weekend, is one such example.”

[youtube]https://www.youtube.com/watch?v=J8wJ6ZG1M3k[/youtube]
Screens the Guardian campaign clip ‘Own the Weekend’ [above]. “Because we offered a part-week campaign they could offer awareness of their weekend newspaper. Cinema has been seen as branding rather than call to action. This was pertinent for Mitsubishi that targeted regions for readership. So we changed end credit for each campaign.” Generic Mitsubishi advert is shown with a ‘Monty’s Mitsubishi’ local dealership info flashing up at the end.

“All the benefits has seen massive change and improvement. In the first full year of digital conversion it almost double investment GBP £6.2 million to £11.4 million 2013-14. Offers greater accessibility. Geo targeting by morroring TV station. Lower entry point in terms of production for smaller advertisers. Even higher levels of engagement.”

“Great example is P&D working with Proctor and Gamble that includes premiers from red carpet that is updated regularly in the advert. Fresh piece of media. By being fully digital cinema is considered a multi-platform solution. This is important for advertisers who don’t just want to reach customers in cinema but on other platforms.”

“KinAds is a cinema advertiser broker in Poland. It represents almost 250 independent cinemas. Leader in non-standard activities. Represented it for 15 year with large and independent chains. Second biggest market share in Poland. €130 million advertising market. Cinema and Internet has strong growth dynamic. But there is growth in cinema too.”

Shows examples of recent cinema ad innovation: QR codes on the silver screen. Campaign enhancement – call to action. “An exciting tool for cross-platform advertising.” Shows Mazda advert with BIG QR code at the end. “It can link to social media, inform about competition and give more details.”

“Photo booths are a very popular tool for off-screen advertising in Poland. We are trying to maximise coverage, so it is a cross-platform advertising. Take a picture, get a ‘like’ and pick up a prize from the cinema foyer.”

“Other examples are ‘Premiere of the month’. Lets advertising stand out. Premium positioning of certain ads – separated from other adverts. Adverts preceded by special customised intro announcing the Premier of the Month. Different technologies to chose from in different places in the different advertising blocks. Sometime we adapt the advert to the film showing. We pride ourselves on shorter advertiser sequences. This is key to memorable advert.”

Jens begins by running through states about NEC’s cinema involvement. 9,900 instals in cinemas in EMEA. Over 35% market share. Promises that he will, “show some ideas and inspirations to think about opportunities.” Asked, “Are we fully digital yet?”

Lobby, posters and screen entrance: [no]

“Juveniles and youth are >40% of ticket sales. Main reason to digitize foyer [is to] increase engagement. Increase attention so it has [positive] effect on concession and ticket sales. When a [concessions] product is advertised digitally the perception is 20% stronger than analogue advertising.”
“Generate additional income, with third party advertisers and film distributors who don’t have to send paper posters. Some distributors buy displays for their own content and display. Companies that specialise with CMS for cinemas.”

Cinemas have different technologies to chose from, not just display monitors. Stresses that it is important to use professional equipment. “The display should be able to be seen in bright environment. Makes sense  to make a little more investment at the beginning.”

Explains that he is representing Weicher Media, which contracted Julian Pinn Ltd. to deliver “long term solutions and strategic direction.” Weischer Media is the market leader for cinema advertising in Germany and German-speaking Switzerland.

“Advertisers don’t ask. They demand. Cinemas represent maximum 1-2% of media spend. [The challenge is to] Remain entertaining and relevant.”

“‘Digital cinema’ is not ‘digital advertising’. These are two different perspectives on digital – the engineer aspect [on digital cinema] is about ones and zeros and not much else. Digital advertising is a marketeers digital. [This ties in with things like] Cookies, emails, apps, SEO. It allows target better, personal, transparent and accountable adverts. Allows ROI [return on investment] to be counted. Advertisers don’t want to advertise AT their market but WITH their market.”

Digital advertising demands “transparency, flexibility and efficiancy. We had to re-boot and re-load cinema advertising. We call it CinemaReloaded for those that had used it as a media. Now we know more precisely how adverts are targeted. We adjust duration according to actual sold tickets and not predictions. [But we] needed to integrate it with cinema sales system. To do that in a trusted way that allowed cinema to run their own system.”

“The cinemas’ TMS [theatre management system] is critical, so we established a certification scheme with which a number of systems are now compliant. AAM, Unique, Ymagis and Sony have all been CinemaReloeaded1.0 ready.”

Talks about the ‘Shareconomy’ that has shifted from ‘I’ to ‘We’ for CinemaReloaded 2.0
“Welcome to the junction. Digital Cinema and Digital Signage moving in two directions.  Welcome to the most exciting medium in the world. Very powerful. We need a roadmap to the marketeers digital.  Now that transition [to digital] is over.”
With that ended the presentations, which were kept short as I threatened the speakers with the trap-door if they went over their allocated eight minutes. There was a Q&A afterwards, but I was not able to keep typing, so sadly (as they say) you had to be there.
Follow me
Patrick von Sychowski
Editor at Celluloid Junkie
Patrick was a Senior Analyst at Screen Digest, went on to launch the digital cinema operations of Unique and Deluxe Europe, then digitised Bollywood at Adlabs/RMW, and now writes, consults and appears on panels about cinema all over the world.
Follow me
Latest posts by Patrick von Sychowski (see all)
Send this to a friend