Shanghai Film Group and retail major Bailian Group have thus signed a strategic cooperation agreement to established a 51-49 joint venture investment company for theater chains. State-owned and Shanghai-based Bailian Group is China’s largest retailer and is involved in everything from department stores, shopping malls, supermarket and outlets, to areas such as e-commerce, logistics, metals and automotive and has a stated aim of “becoming the “Great Wal-Mart of China””

The JV’s first project will be to develop the Shanghai No.1 Yaohan New Century Studios with the latest projection and audio technology as well as transforming Hall 1 into an Imax auditorium. The JV will have a registered capital of CNY ¥10 million (USD $1.61 million) but both companies will contribute additional resources and capital on an ongoing basis. SFG will contribute its long expertise in operating cinemas while Bailian will provide suitable venues for use, thus exploiting synergies in the exhibition and real estate markets.

Chinese exhibitors are finding it challenging to compete with the Wanda Cinema/Plaza nexus of exhibition/real-estate, particularly in terms of finding affordable real estate as proportion of rent creeps above the recommended 15%-20% of box office. But the SFG-Bailian JV co-operation is envisioned to be even more far-reaching than a simple cinema-real-estate venture and in “the future the two sides also plan to expand all-round cooperation on capital, business, cinema investment, advertising and marketing, real estate and derivatives cultural development and other sectors.” 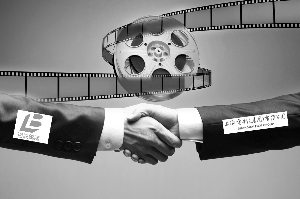 Sohu News reports that the two companies have far reaching vision for how to integrate their consumer propositions across physical and on-line retail:

Reporters learned that the two sides will integrate the advantages of resources in their respective industries, in membership services, cultural and creative parks, culture and leisure, tourism projects, third-party payment and other aspects of exploration mode of cooperation, the establishment of pre-paid card acceptance business cooperation, ticket sales agents, and members of both parties exchange swaps and integration and other related business cooperation.

A three year plan also envisions e-commerce playing an ever greater role for Bailian, with traditional stores having to find new functionalities, of which cinema is an obvious one. As the businesses and stores are transformed, Bailian is keen to import import know-how from “experience, functional, cultural-type projects in physical stores in order to improve customer multi-level needs.” Bailian is present in more than 20 of China’s provinces and has more than 6,000 business outlets.

SFG’s United Cinemas has a total of 228 cinema complexes, ranking second in China with box office takings of CNY ¥1.88 billion (USD $300 million). By partnering Beilian SFG is hedging its bets against rising rental costs, which increased by 33.77% in 2012 and 42.33% in 2013, putting a significant squeeze on margins.

The target of the JV’s first co-operation, Yaohan New Century Studios is one Shanghai older large multiplexes. With a total area of 3655 square meters, it has 10 auditoriums and a total of 1299 seats. It has regularly ranked in the Top 25 theatres for Chinese cinema box office revenue.