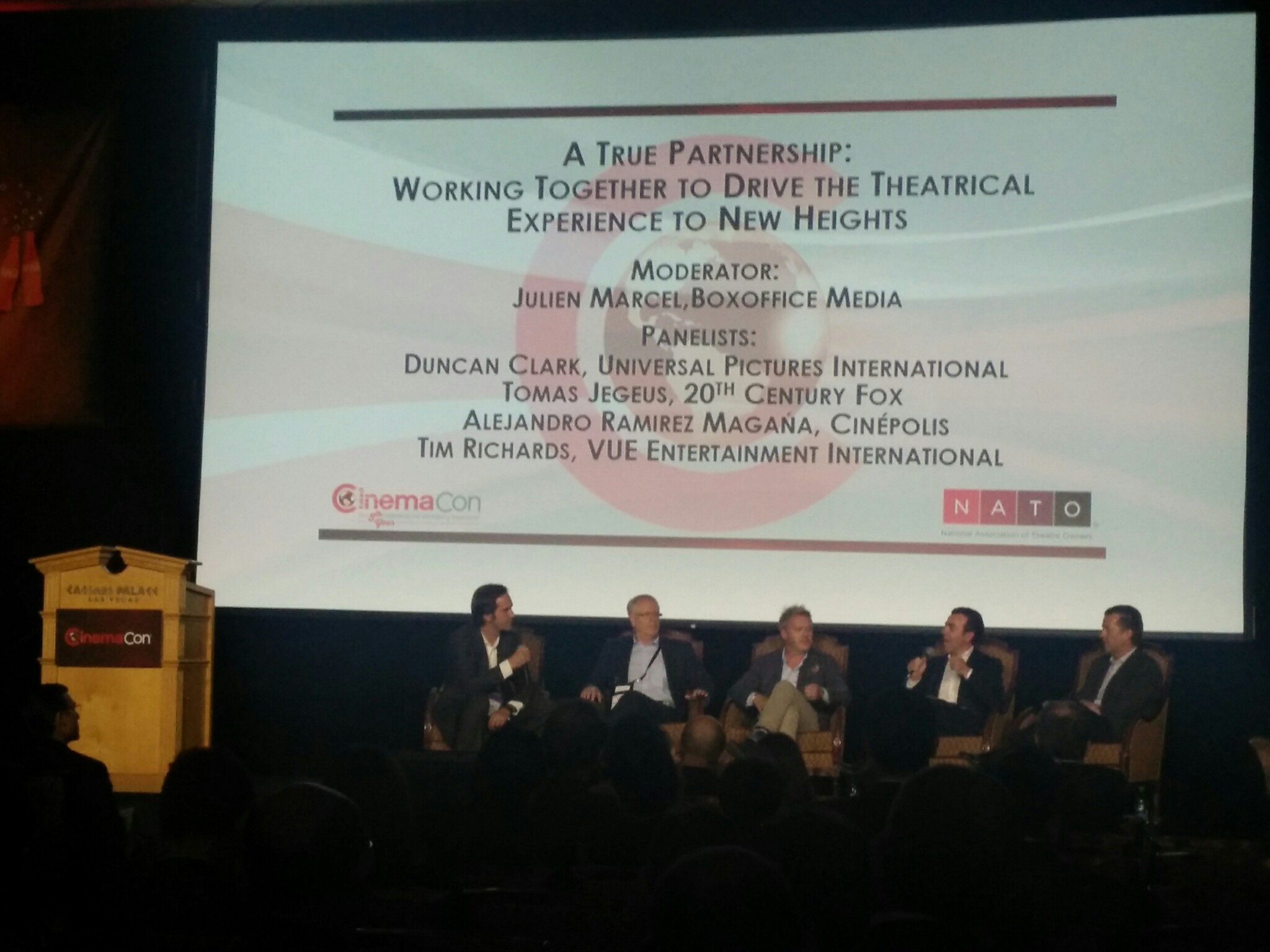 This CinemaCon panel brough together exhibitors and distributors to look at the challenges facing cinemas – declining or plateuing attendance in mature markets, the impact of social media, new technology investment questions, etc. It was expertly chaired by Julien Marcel, CEO of Boxoffice Magazine.

Julien Marcel (Boxoffice.com & session chair):  How do we attract consumers to our theatres? Start with distribution. Marketing has changed a great deal in the last few months, from carpetbombing to a more sophosticated world.

Tomas Jegeus (20th Century Fox): It has changed but it is still changing. Go back and look at the fact that much of international growth is driven by China, but a mature market like Europe has the same problems as the US in terms of young people not going. Young generation has entertainment at the tip of their fingers, that’s the reality we are facing. Going digital does not make it easier or cheaper to reach people, but it makes it interesting. Facebook is not so important any more and it is a fragment of this world. MySpace got suplanted by Facebook but today there are hundreds of platforms. Tumblr is more young female, Instagram is even balanced and LinkedIn is our generation [older]. Takes more money and effort to reach everyone, becaue not all of these come for free.

Julien: How do you make consumers part of the conversation?

Tim Richards (Vue Cinemas) – CRM has been focus of exhibitors for several years now. Who are your customers and who also are you not reaching. Get as much data as you can on your customers. Facebook may have been the answere two years ao but now they [customers] have moved on. We use a number of programs to get people to sign up and then get as much data from them. Work effectively with products that you are selling to them. Both sides are doing that work and we need to join that up even more – exhibitors and distributors.

Julien: Where do you expect more collaboration?

Alejandro Ramirez (Cinepolis): We have to do more in terms of using analytics and we probably don’t share enough statistical information. We need to know how teens and millenals are communicating and tap into that. We are utilising our huge fan base on FB, Twitter and Google+ – we have 10m fans in total. We are number one in the exhibitor space but second to Corona. Clip of Hulk from “Avengers: Age of Ultron” reached 3.3m impressions. Of those 572K viewed video, for “Fifty Shades of Grey” it was 3.7m impressions and 533,000 views, for “Terminator: Genisys” it was 2.6m impressions and 412K views. We advertised an Alfons Cuaron [the Mexican director of “Gravity”] event and we got 100k people signing up to ask him questions.

Julien: You are uniquely placed to talk about huge buzz of a blockbuster (Furious 7).

Duncan Clark (Universal): I agree with what’s been said. Challenge of reaching any demographic, be it “Furious 7” or “Fifty Shades”, has been the same. We are now figuring a very specific pathway. Which has gone from 2-3% to 20-25%. It is an obvious place to go and we have to be part of that programme. I don’t know if we are sharing enough. We feel as distributors that we could do so much more if we could access the information that you [exhibitors] are mining, which would be valuable for us both. It’s a joint program of marketing. Distributors have to create interest, awareness and first choice. I’m just not sure that exhibition has an opportunity to get into [its] heart. That information is critical. I’m just not certain that we are working together closely enough. That is a territory by territory question.

Tomas: We know how to reach people. An easy way to work together is engagement. No. 2 we have to figure out not on an exhibitor-by exhibitor or country level but how to close the loop and make the sale. The technologies to do it are there, but we have not come together to do it. Even if you are not buying the ticket, just put it in your calender.

Julien: The ability to do this depends on the tools. Are you seeing an evolution in tools to make it achievable and sharable?

Richards: That is part of the challenge. There is SO much data and we are warehousing it. We did it with Fox for “Kingsman” and we did it as one company in every single way. And it delivered. It improved the entire market. I feel “Kingsman” worked beause of that. We need to do it more often. We are starting to sit down together more as an industry.

Alejandro: We have closely monitored sectors of our customer base. We looked at members of loyalty program who had not been to Gold Class in the last year, we managed to get them to go by 12%. We engage with loyalty members who had not visited in the last three months. We dropped that from 3% to less than half a percent. Managing that amount of data is highly complex. You need people who are trained to deal with that data.

Julien: [Asks about the Uber-isation of economy.] How can we Uder-ise ourselves?

Duncan: I think we violently agree with each other. The bulk of the program is us marketing the movies to the challenge of the social network scene. It is a competitive scene but we all have to be partners together. I’m not sure we are doing it as well as we should.

Tomas: We all talk about segmentation. Last year our slate happened to cater to all audiences. “Fault in our stars” was a small audience that exploded into mainstream. Then we had “Dawn of the Planet of the Apes” that was always going to be broad and mainstreams. Do we then have to segment theatres internally between upmarket, VIP dining, or are we then cutting off the younger generation? We know that ‘one size fits all’ is long gone.

Julien: This takes us to the second part. You mentioned recliner and wide seats. It would be interesting how you rank those in terms of priority for transforming the cinema experience.

Alejandro: There a number of things. You mentioned Premium Cinema. We started that 16 years ago. Good way to segment market but not for everyone. RBC Capital Market study shpwed that 60% of customers had been to cinemas with premium seats and 38% said they woud be more likely to go to cinemas with those seats. Food and beverage component entices people. Also the experience starts as soon as you open the app to purchase your ticket. You can purchse ticket for Cinepolis inside the Facebook app. Record was for “Hunger Games” last year, but “Fifty Shades” broke the pre-sale record by 90%, then “Furious 7” and then “Avengers: Age of Ultron” broke that record.

Julien: Tim, what is your experience and priorities in transforming keeping in mind targeting challenge.

Tim: Where we have run into problems is when we got complacement. This generation of exhibitors are continiously trying to push the envelope. The experiene of VIP and Premium lounges is that they work in Australia, but in other markets it is not a 12 month market. So there is not a one-size-fits-all. There is a graveyard of things that have failed. We tried beanbags instead of the first row of seats and that didn’t work. We tried sofas and love seats and that didn’t work. But you have to keep trying. It is the entire journey. This generation is more social than ever. Internet used to be a guy on his own in a room. Internet is now making kids more social.

Julien: Digital ticketing is still in single figures so how can we change that?

Tomas: Sometimes monopolies are good. Exhibitors are competitors. But for consumers, if you think about the plethora of [cinema ticketing] apps. I look at a presentation I did six years ago at CineAsis and that world of widget has just gone. We have to go back. The best apps are for managin your money. In terms of purchasing that’s when we need to get together of how we can find a solution for consumers, not for ourselves. We talk about it every year but we are afraid to meet, because of the issue of “collusion”.

Tim: A great example of where we have come together in the UK is Compare the Market (Meerkat Movies), which was previously Orange Wednesday. This is a third party that comes in. We will spend millions and millions to promote movie going. That is the kind of things we should be looking at in other markets that we are only doing in one of our nine markets.

Julien: This is a discounting scheme but do we need to look at this in other markets?

Tim: Yes, we hope that this is going to attract the younger generato that is so critical to our industry.

Duncan: If you look back classically. My son is online with nine other guys playing a game socially. Some of the graphics of the game are incredible. When we get them out they have to go to an environment that is special. When they have made that choice, they should come away feeling very elevated about the experience than they can only get by leaving the house. Tim and Alejandro have been at the forefront of breaking the mould.

Tomas: [Reads tweets asking questions of the panel].  We shuld do the pre-show completely device friendly. We hate that people pirate our trailer [sic] but we need to embrace that. There should be a way to Shazam and a way that you can put this in your calender. And we can make this geotarget as well.

Alejandro: Shocked to learn that some games cost $100m to develop, which is as much as a movie. Technology keeps evolving and we have to present best. We have to keep fulfilling the promise of digital cinema. A few years ago we heard that digital cinema was still in its infancy. We still have not seen that. We’ve seen HFR with the Hobbit and that was quite disapointing. It did not lead to more ticket sales and was a disapointment. As much as we need to innovate in cinemas.

[With that the panel discussion came to an end. There was time for one question and I asked Tim about software for analysing consumer data. His reply was that exhibition is a small specialised industry, that they had looked at what was in the market and nothing currently meets all of their needs.]
Follow me
Patrick von Sychowski
Editor at Celluloid Junkie
Patrick was a Senior Analyst at Screen Digest, went on to launch the digital cinema operations of Unique and Deluxe Europe, then digitised Bollywood at Adlabs/RMW, and now writes, consults and appears on panels about cinema all over the world.
Follow me
Latest posts by Patrick von Sychowski (see all)
Send this to a friend