India’s SPI Cinemas (formerly Sathyam Cinemas) has become the first exhibitor in the world to integrate with the Uber API for the city of Chennai.

The deal between one of south India’s best known cinema brands and the world’s largest car-ride service allows users to book cinema tickets, concessions and a ride to the theatre in one transaction.

The deal was announced on the Uber blog, providing details of how the transaction would take place:

SPI Cinemas have used Uber’s API to allow customers with an iOS or Android device who have booked tickets through the SPI Cinemas app, to have the option to request an Uber from within the app to catch their movie. That’s one less hassle for movie-goers to think about when going to watch a movie on the big screen. The button to request an Uber will appear once the booking for food and movie tickets is complete. There is also an option to see the estimated price to the location and the time it would take for your Uber to arrive.

Putting aside jokes about Indian traffic jams and cost implications for rides to the cinema, the deal is likely to be replicated by other exhibitors, assuming terms for sharing revenue and data can be agreed. 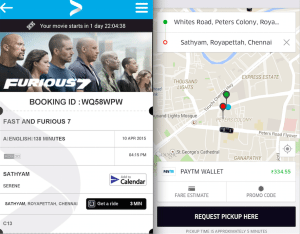 The deal will work for both impulse purchases as well as advance bookings of cinema tickets:

For advance movie ticket bookings, you will receive a reminder notification on your iOS or Android device, one hour prior to your movie which will take you to your e-ticket (like the one [above]). From here you can easily request your Uber ride at the click of a button.

This means that cinema ticket, popcorn & soda and ride are all handled within the SPI Cinema app, rather than requiring toggling between two separate apps with no integration.

Uber has had a rough ride recently in India, with the service accused of not enough background checks on its drivers, after an Uber driver in Delhi allegedly raped a female passenger. The service has since introduced new safeguards, as well as adapting to the local market by copying rivals TaxiForSure and Ola in launching an auto-rickshaw service called uberTAXI in the capital Delhi that uses cash transactions rather than mobile payment.

SPI Cinemas was recently considered to be an acquisition target for multiplex major PVR, which upset some south Indian movie fans, but the deal appears to have come undone recently. With cinema ticket prices being capped in southern India, it would be interesting to know if the SPI-Uber deal entails any revenue sharing. 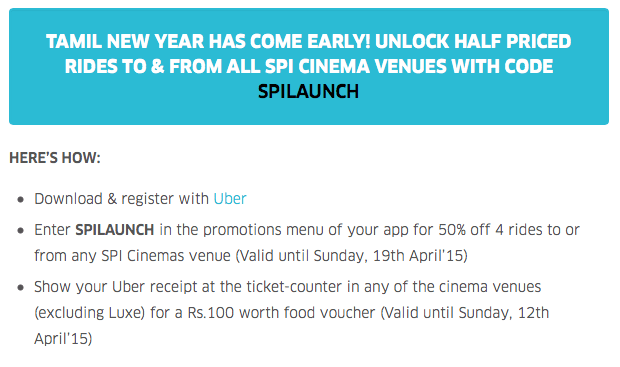