Polish multiplex major Multikino has launched an ‘Unlimited’ deal that truly lives up to its name. The special promotion will allow patrons to watch as many films as they can, drink as much soda as they like and top up their popcorn as many times as they want in the span of 24 hours.

The Multikino ‘All Inclusive’ promotion was launched on 27 March and will run until 30 June in seven of its cinemas – Bydgoszcz, Katowice, Lublin, Olsztyn, Poznan, Warsaw and Wroclaw. Claiming to be the first offer of its kind in Poland, if not in the world, it offers “All Day: Watch and Eat as Much as You Like.”

Participants will be issued with a wrist-band that allows access to all screenings in a given day of the week, as well as unlimited refills of sodas and unlimited top-ups of popcorn. The offer is valid for both 2D and 3D films and there is no surcharge for glasses. The offer also entail entry to the company’s PLF screen, the Sala [Hall] Extreme located in Multikino Katowice.

The patron have to collect a tickets for each film before the start of the show and cannot simply wander into any auditorium in the multiplex. The offer is not valid for movie marathons, event cinema, baby screenings, Ladies Special (Kino Na Obcasach) and other special screenings.

Multikino seems to consciously target movie buffs right during the blockbuster season that will see major releases such as “Fast & Furious 7”, “Avengers: Age of Ultron”, “Mad Max Fury Road” and “Jurassic World”. While ‘only’ available in seven locations out of Multikino’s 32 sites, this is an interesting experiment that will be followed with interest by many in the industry. 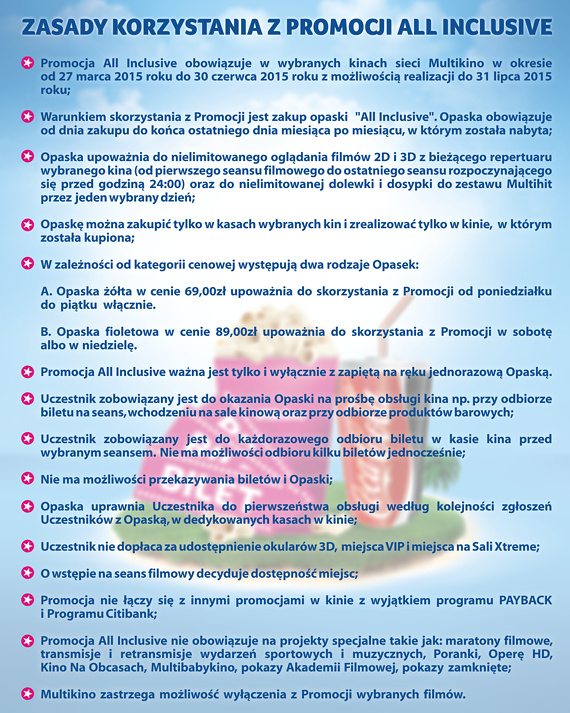