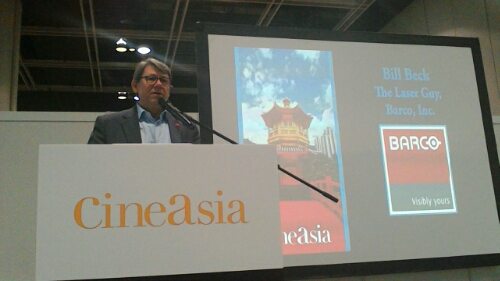 Having confirmed that his business title really is ‘The Laser Guy’ Bill begins, “today I’m going to explain ‘why’ Barco laser.” Mentions the press release yesterday with the milestone of 50,000 Barco screens and Barco also market share leader in laser cinema.

“Most important point: no lamps. Will save the cost of 120 lamp changes. Super bright at 60,000 lumens. 6 Primary Barco Laser3D that works with all major 3D systems. Also integrates Barco Alchemy cinema processor. We call it integrated because light source is inside projector. Most safe and highest efficiency because the projectors are directly combined. Engineered and testedfor 30,000 hours. 63% more energy efficient than Xenon projector.”

Inside it is 6 Primary Laer3D sets – two each of red, green and blue. Bright, smooth and beatiful colour picture. Works with silver, matt, screen and active or passive 3D glasses. “Clean & Green” is the motto. Over 30,000 hours lifetime it provides 54,000 AVG lumens. Lifetime saving of 150,000 KwH savings over lifetime.

Commerciallly availlable and delivering globally. Installations in China, Europe and the Americas. 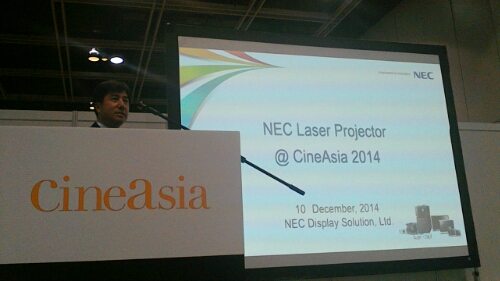 He thanks ICTA for the opportunity to present. First a quick introduction to NEC Display Solutions.

Lots of experimanting with higher efficient phosphor material led to the development of the projector. Stresses compact and low maintenance. No exhaust or chiller needed because of less heat. Reliability and redundancy. 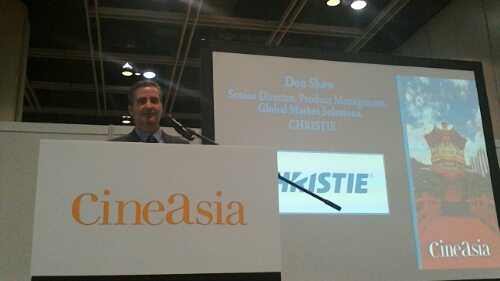 “As most of you know, we have a 6P laser projector here and we are running demos throughout the week. We have discovered key driver is 3D, so laser for a premium 3D experience.

[I won’t repeat Don’s talk unless it deviates from the longer Christie laser projection talk. See the earlier post today. It didn’t, so that’s it for laser.]
Follow me
Patrick von Sychowski
Editor at Celluloid Junkie
Patrick was a Senior Analyst at Screen Digest, went on to launch the digital cinema operations of Unique and Deluxe Europe, then digitised Bollywood at Adlabs/RMW, and now writes, consults and appears on panels about cinema all over the world.
Follow me
Latest posts by Patrick von Sychowski (see all)
Send this to a friend