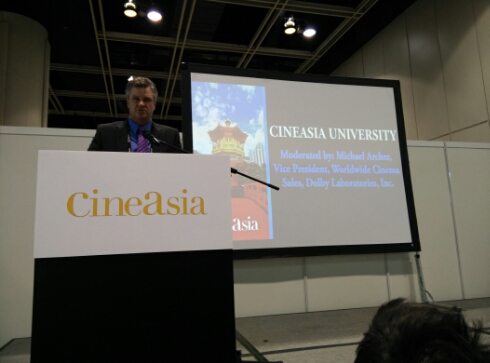 This ICTA organised session s part of their out-reach and education effort for the industry. Micheal Archer, [above, no longer Doremi but] Dolby does the welcome and introduction.

“We started out in special attraction and now we are entering cinema. Cinema traditionally catered to two senses – sight and hearing. We offer two additional, touch and smell (as of yet we don’t do smell).” That’s how Dan starts his presentation. Each speaker is restricted to just five minutes, so each session is no more than 15 minutes. Short and snappy.

4D client base breakdown:
3D upcharge 69%
2D upcharge 17%
Incremental 13%
Repeat 1%
“So 14% is customers you wouldn’t get at all,” Dan says, reffering to the last two categories put together.

MediaMation work with USC to set up a 4D studio with 4 programmers that do nothing but program seats all day (and night). Pitch, roll and heave motions.

“We like to do full theatres if you are going to have the full environmental efect,” Dan says, when it comes to cinema installations. Ends with a customer testemonial. “Honestly, we didn’t pay this guy.” Attraction Theatre Review clip plays.

He ends by telling the audience that they have recently set up a JV in China “and a factory coming up here to service all of Asia.” Working with alternative content for gaming and more. 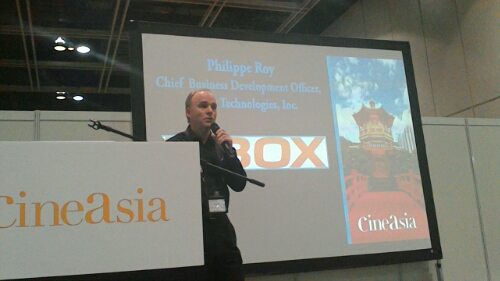 Philippe begins his talk by saying, “I started the company in 1994. D-Box is not a 4D company. We started basically this whole putting ‘motion’ in ‘motion pictures’. We did it in 1996, initially for home entertainment. Back then digital cinema was barely starting.”

“In 2000 we started selling the first systems for OEMs and custom installers. Then in 2006 second generation of D-Box system. 2009 was the first time we did a installation for cinemas in USA,” Philippe says as he runs through the company chronology.

“It needs to immerse you and not distract you from the movie,” is his company’s philosophy. First film was Universal’s “Fast & Furious”. “In 2012 we had 7 movies. In 2014 we came up with next generation of techonlogy, based on core technlogy and we continue to expand in many countries.”

315 screen in 25 countries equipped. 150 movies to-date. Puts up a quote: “Nothing happens until something moves.” – Albert Einstein. “That explains what D-Box does. It gets you involved in the movies.” 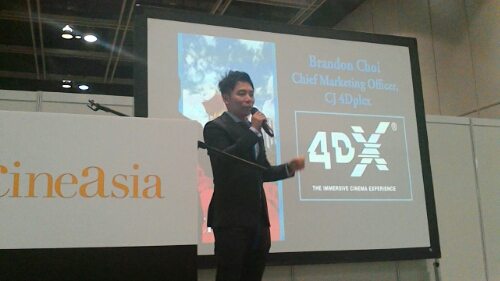 Brandon Says he will be a little less technology and insted focus on Asia and the immersiveness of movies.

Key message on first slide is that Asian markets are 25% but the growth from the global market is mainly from the China market. Admissions per head are high in Singapore, South Korea, Hong Kong (4.0, 3.8, 3.4 movies per person per year respectively) but only 0.4 for China. “Huge potential to grow for China market.”

Second topic is immersiveness. Sound, screen and seat system all offer immersiveness. Offers the example of the CGV cinema where each floor offers a different cinema experience (see photo below). 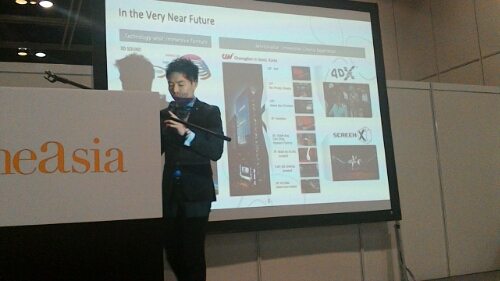 4DX auditoriums box office has been at least 1.5x higher than average Chinese theatre – result of both upcharge and higher attendance.

Screen X – “This is similar to the Escape screen of Barco.” Already over 70 such screens in operation in Korea. Loking to expand to the rest of the world. Thank you.