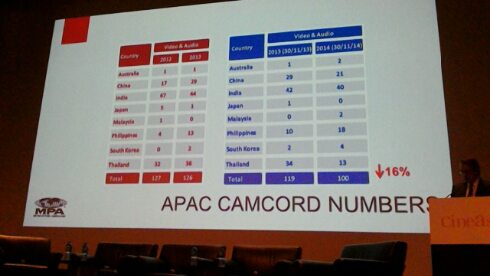 In an effort to provide updates on the CineAsia 2014 conference and trade show presently taking place in Hong Kong SAR, this post was written live, and in the present tense, during one of the event’s presentations. Comments attributed to speaker(s) are paraphrased unless denoted specifically by quotation marks. [Also no spell check on my tablet version of WordPress. Sorry.]

CineAsia has a long tradition of starting off with an overview of IP Protection and Piracy by MPA’s Regional head. With Asia being the home to several territories with major instances of piracy, this is always a timely and important talk. Rittman manages to combine being diplomatic with hard hitting when it comes to spelling out what the situation is.

Andrew Sunshine first does the general welcome to CineAsia 2014, thanking sponsors, partners, studios, trade show exhibitors and other. He promises a great three days ahead and then hands over to Frank, whose talk will cover MPA, Camcording in Asia-Pac and outreach programmes and trailers.

The first slide is ‘Who is the MPA?’. Founded in 1922… I won’t recap the organisation’s history here. From Singapore the MPA covers 14 territories in Asia-Pacific, where it is also involved in legislative efforts to protect IP and also work with local screen communities.

‘The “what” and “why” of camcording’ is the meat of the entire talk. The situation has improved since 2013, Frank notes, with India seeing significant decrease (but still high). “China is still a problem,” Frank aknowledges. “What is MPA doing to deal with this,” Frank asks rhetorically before answering, “Actually, a lot. Though there is no magic bullet.”

“Getting the right legislation in place is important.” He then reels off all the get-outs that a clever defence attourney might use to get their client off the hook where anti-camcording legislation is weak. Anti-camcording Bills are pending in India in Thailand, where in the latter case it has passed parliament and is waiting royal assent. The Trans-Pacific PArtnership also has provisions for anti-camcording that wil help.

Looking at the ‘Hotspot’ of China Frank points out that camording went down in the most recent year. DY161.com is where camcorded films usually appeared first and that site has now been brought down. “The good news about China is that we have good partners, who can close down cinemas where camcording occurs” (and is forensically tracked). But China still does not have an anti-camcording law. “Prosecuting them under existing copyright legislation is difficult,” he aknowledges.

Frank the continues, “another challenging camcording hotspot is India.” In 2012 the problem peaked with 67 instances – 24 audio and 43 video. “I’d like to give a shout out to the Andhera Pradesh Chamber of Commerce,” who assisted in moving in on two raids in Ahmmedabad and Ghaziabad. Today “the worst appears to be behind us.” Though he aknowledges, “the challenges can seem overwhelming in India at times.” But he was frank that they (MPA) are a small operation and have to work in partnerships with local organisations to tackle the issue of piracy and IP protection.

“Looking at the Philipines, you can see that we have a very disturbing trend,” as Frank points to a growth of 1, 4, 13 and 18 cases of video piracy year-on-year for the past four years. Numbers dropped significantly following the passing of legislation in 2010, but are nw creeping up. However, there is hope on the horizon. “I can’t disclose too much here, but an investigation is on-going,” Frank revealed, expressing confidence that the numbers will have been pushed down next year. In addition to a possible raid, there has been a major industry outreached at an exhibitor conference.

Moving on to the training conferences that MPA helps with “and we have rolled out four versions of the training manuals.” (www.mad4.org) that has also been localised in Asian languages such as Cambodian, Hindi, Bahasa Indonesian, simplified Chinese and several more.

Frank aknowledges that the USA is a major source of pirated material and then talks about the recent joint policy with NATO on wearables in cinemas. “An important part of the strategy is to win the hearts and minds of the consumers.” This leads to a talk about the public awareness trailers.

Having started with the 2004 “You wouldn’t steal a car”, that Frank aknowledges was loud and brash, the message has been built on and evolved. But he says that this original effort has mutated into local trailers that also swith from condemning piracy to thanking people for supporting legal avenues of watching films.

[PLAYS RECENT AUSTRALIAN TRAILER  – can’t find in on YouTube, if anyone has the link please post it in Comments section]

Frank then shows the Japanese trailer, with fun and humour . “I don’t know if this video would work in many other countries, but it is one of my favourites.” [This one is my favourite too with Camcorder Man] Here is an earlier version of it:

He then shows the Philipines trailer.

“The growing concenr is that the message is getitng too humorous, so the latest trailer is more serious to reflect the growing trend of more camcording piracy in Philipines.”

“I really enjoy showing these trailers and we’ve just scratched the surface and I could show you ones out of France, China, Mexico and many more, but we’ll save those for another time. Camcording policy is a problem that won’t go away but by educating, improving legislation we can improve the situation for the next generation of film makers.”  And with that the session ends. [Apologies for not being able to find more of those trailers on YouTube. Obviously they are either not being uploaded – legally or otherwise – or I just can’t find them.]