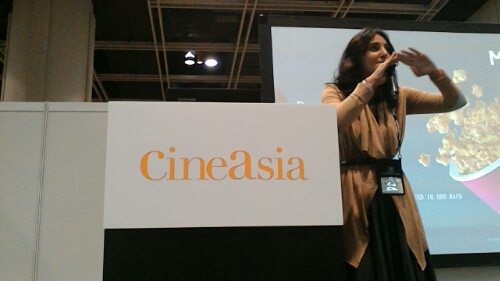 The afternoon is presentations from three exhibitors showing what they do in their cinemas. [You will be happy to know that we got a 10 minute break for lunch and I scraped together the last of the rice and whatever suacy went with it that was still left on the buffet table.]

Mariam El Bacha, Director of Operations,MBO Cinemas, is first up.

“I am going to talk very quickly about three things that are unrelated but I want to bring up,” sha starts in a delightfully upbeat and optimistic tone.

1. Programming mistakes – “You have to keep trying new things, even if they do’t work, it is a good way of learning what not to do.” During Chinese New Year they were busy, 1.1 million admissions, lot of long lines and lot of complaints. Low strike rate of 19%. “We had good combo strategy, not the issue, so what was it?” Too many films all starting within 20 minutes of each other. We gave cinema managers the ability to decide the session times.

“We had to train cinema managers to follow certain patterns. One is for the main film to programme that one first. At least 10 minutes apart. Multiplexes are not designed for hundreds of people at once. Separate the biggest hall by 30 minutes from your second biggest hall.” Mariam says that she doesn’t care if three shows start within ten minutes of each other first thing in the morning, but peak time is different.

They started testing this concept in March and with almost the same amount of admissions and the same menu, they increased strike rate to 27% and SPP (spend per person) by the equivalent of almost one US dollar.

Loyalty programmes points – Allstar points? What to do with them? So they marketing department came up with this idea of doing an eBay-like store. The rule was that they had to be unique items and had to be movie-related with fanatical following and not too much repeat by only having every second or third film, like Transformers and the Hobbit. People came to cinema and then went home to bid for the items.

Result was: extra sign-up of 20,000 members during that one month of activities. Increased admissions by 11%. Increased views to micro sites by >200,000. Thinking of MBO brings the excitement nearer to you.

Next comes a story from Mariam’s background in Argentina and the local cinema Village Cineas. That was the time of the first default and the chaos that it plunged Argentina into when people ransacked stores. One night she sees five police cars parked outside cinema and police pointing their guns at the side of the cinema. [Sadly I miss the lead up to the punchline: “We want popcorn!”] Mariam then talks the MBO partnership with St John’s Ambulance for a blood donation drive.  She screens the advert. It sounds like the campaign was a great success: 2,168 pints collected – 6,504 lives saved. Next year they plan to do even more! Then back to the lucky draw and more prizes. 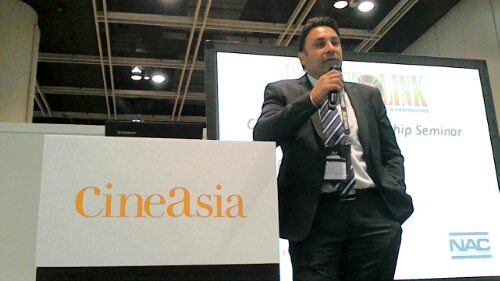 This is the first time that CineAsia has had a speaker from Pakistan. Sayed runs through some of the preconceptions people have had about Pakistan. Then aknowledges that there has been a bad period when Pakistani cinema shrank from over 1,000 screens to just 50 screens. “So it is easy for us to copy what you guys did in the meantime. The problem is getting people back to the cinema. Spend has gone from USD $0.25 to $5-$6 per person.”

Syed then says that he has prepared a presentation showcasing what they have been doing, often in partnership with the likes of Golden Link. “Unfortunatelly people don’t travel to Pakistan. Cinemas keep going even when times are dark.” Then we switch to the “self explanatory” slides.

‘It’s been a long journey – it’s been a fruitfull journey – we are just getting started’ is the theme. Black and white pictures of the company’s founders. Concession sale facts. Nishat Cinema tragedy in 2012 is aknowledged. DHA Cinema Lahore is where they have pushed up concession spend seven-fold compared to another cinema in Karachi, thanks to partnership with Golden Link. Slides of Pakistani celebrities visiting cinema for the opening of Avatar. Then we move to Atrium Cinemas Karachi 2010-present. Super modern mall multiplex.

First 3D projector in Pakistan. More shots of local celebrities and cinema operators and cinema auditoriums. All looking very impressive. Close up shots of nachos. Then popcorn. The Penguins (again). More Penguins. Finally Centaur Cineplex, opened in 2013, which seems to have the highest spend of any multiplex in Pakistan at over $2,000 (not sure if this is per day or week). Lots of pictures of the cinema building sites. Heavy pumping rock soundtrack has replaced the great Pakistani music tunes. Should have played Sachal Cinematic Orchestra IMO.

Interesting presentation but I would have loved to have heard directly more about the challenges and learnings from being a multiplex operator in Pakistan.

The third presentation was by Matthew Ezra from Hoyts Cinemas, but technical problems with WordPress on my tablet means that I can’t locate my notes from his talk. Sorry.