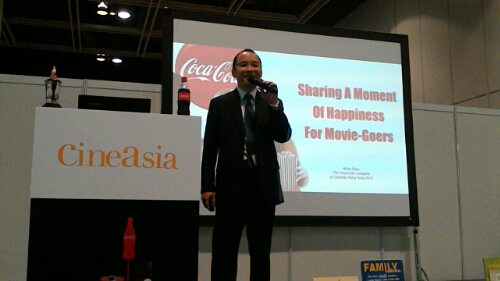 Brian Chau, Customer Leadership and  Operations Director for Coca-Cola Pacific is on immediately after Larry. [No break for lunch – I’m sipping my Coke Zero and thinking that these seminars will do wonders for my figure.]

“We as a beverage company are proud to refresh the world with good drinks. But also happy to refresh movie goers. Today I will share with you how to keep the movie going experience as unique as possible.” Brian points out how well popcorn and Coke go together. “It’s almost become a culture,” not just in the US but also in Hong Kong and around the world, Brian starts of with.

‘Bringing it to life at the point of sale’ is the tile of Brian’s first slide. Kicks off with data: Worldwide average is 80% people driking in a cinema auditorium, but only 30% of those are being bought in a concession stand. People either share or bring in drinks from the outside. “There is a lot of upside there,” Brian observes.

Activation focus areas: 1. outside of cinema, 2. lobby, 3. concession stand and 4. in the auditorium. “That is where we focus to bring the brand experience to life. But the main focus is to get the concession area right.” First point is t make it easy for people to buy – hence combos.

Make it special – by tying in with the movie (Penguins of Madagascar again). “We also do a lot of promotion during festival time – Halloween, Valentine’s Day, Christmas. That is when a lot of people go to the movies and we need to capture that.”  Then come the polar bears – very cuddly and distinct. Next brand heritige. “2015 is the 100 year celebration of the contour bottle,” Brian reveals. Brian plays a video celebrating the Coke bottle shape [Capital Cities’ ‘Safe and Sound’ Hi-NRG mix is the song used].

The Contour 100 Program will see a lot of activation and excitement next year. “We will do a lot of special designs on cups, caps and art collection, digital content and on-site demonstrations. These are the holistic things that we will do together.”

Next, “we also want to make it stand out – lobby, auditorium, outside cinema.” He next shows examples from around the word, like popcorn on the staircase, mega visual displays of frozen drinks and more. Then Brian dispells the notion that Coca Cola has to be sold in cups. Selling it in the bottle speeds up the process for latecomers. “Offer packaged goods too – served cold,” he implores the adience. In India they found that packaged drinks did not cannibalize concession sale stands but increased overall sales. He shows pictures of trolleys with sodas, sweets and popcorn as another means of expanding sales opportunities.

“The highest attention from a cinema goer is in the theatre when they are watching the big screen,” Brian reveals. This is why Coke does a lot of on-screen ads promoting special examples. Plays Polish Multikino ad. “I don’t know the language, but just looking at the visuals is enough to trigger activation.” Then a Spanish ad made in 3D that looks like audience in front of you getting up to go out and get a Coke.

“These days even more importantly, because people have smartphone, a lot of engagement is hapening before people enter the cinema. So we are doing a lot before people come to the cinema.” Gives examples of the Aeon Mall Kyoto Katsagawure mall opening with cross channel activation. 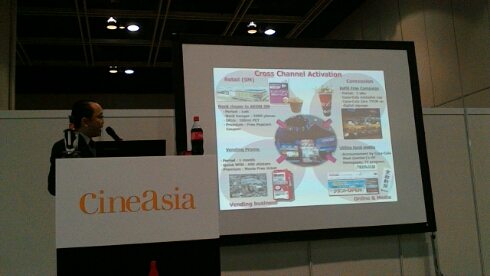 “We make sure that when people are on Facebook or Twitter, they know that there is something going on.” These are some of the examples of what Coca-Cola are doing to enhance the movie experience. Next up two examples from around the world. First example is Cinemark Latin America. It involves patrons running an obstacle course in the multiplex to get a reward in the form of a Coke. People in the cinema see it in real time on the big screen.

“The next one is even more pushing the boundry. This one is from Denmark.” [I’m guessing it is the ‘Slurp’ PSA]. They worked with the Cinema Association about announcement. [No, I was wrong, it was a cute claynimation. Nope, that was the old advert. Now comes the REAL one. It is ‘The Coca Cola Slurp!’ It is good.] “This is how we are trying to engage with cinema goers, we go a little further. For other cinemas we make a series of two advertisements, this is the one we send around the country.”  Screens second one.  Over 900,000 YouTube views.

That is it. Thank You from Brian. He wishes us a good CineAsia  and early Merry Christmas.