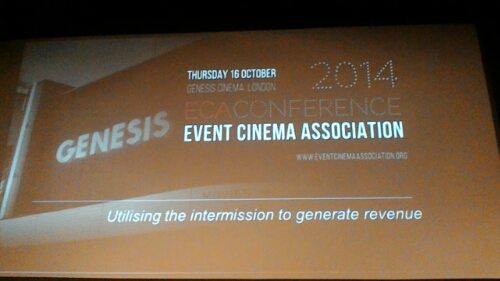 The second breakout session looked at revenue generating opportunities in the intermission, presented by Atena Simovic, head of event cinema department in a multiplex in Bucharest with 13 screens for past three years, during which they have had over 500 events, which inlcludes renting out the venue.

Their cinema organises live on-stage event, including stand-up comedy and concerts with full staging capabilities. “The first time when we had intermissions is when the distributors told us about the line-up of their shows,” she explains. There was a conscious effort to extract more revenue, but in the beginning effort such as opening new bars didn’t work. So they said, “let’s announce it and it started very slowly to grow. But then they had the first event without intermission. So we had an idea to have the intermission BEFORE the event.”

Initially this didn’t work because people didn’t shw up on time. “OK, we said, let’s create and Event Before the Event, which is a complegte experience.” So people gathered before for socialising, sharing and getting together as friends. During the week theyhave kids’ theatre, so they come up with After-the-show-Intermission with breakfast, games or face painting for their children, because the mall didn’t open early enough to do these events before the show.

They then tried product presentation and for an event that had not been selling well, once the commercial partner offered a beer and a sandwich for each attendees, the event sold out. “This is a little bit of what we have done and learned a ot in thr process, but we had questions; questions we want t share today.”

Atena asks: Can we use the intermission as an added value for the event and business? The question is asked about brand partners and showing ads o screen. Atena replies that all activations are near the auditoriums, because if they have to walk far to get a bottle of water, they will drift off to the bathroom instead.

The question is what pricing is for films vs event cinemas, which is 25 kron versus 60 kron, so while it is cheaper than places like London and Paris it is still a premium price.

The point is then made about pre-recorded events allowing for longer intermissions. In Romania they don’t show Met Opera, but it is 40 minutes intermission length. A member from the audience with a US accent says that there is no advertising and the audience just milling around. Atena highlights that the time difference means that live events often get shown late and that people drift off after midnight, even if the event has not finished.

Next is a question about marketing: can we market this facility ahead of he event. “Promoting the intermission helps to sell the event and to sell out more quickly,” Atena confirms.

Another audience attendee who distributes the three hour long Andree Rieu concert and confirms that with an audience in their 60s, promoting the fact that there will be a 15 minute break means that it will attract more people who might otherside be put off by a Rieu marathon. 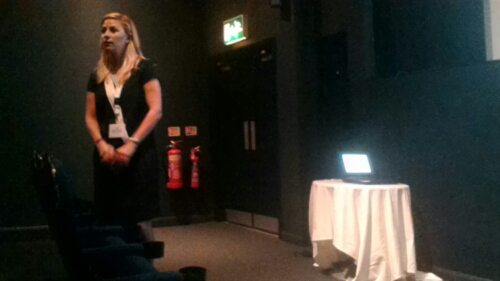 Atena talk to selling a season rather than just individual events. The question comes from the audience about the situation in France where the all-you-can-watch cards for 20 euros and what the implications are for price sensitivity when it then comes to concessions. Atena says that they look at how much people are prepared to spend in a night, alos considering that they might have to pay for taxi to get to the cinema. “We want to create high value for the customer and not high marging for us.”

Next question: should we work with 3rd parties? This refers to others than producers or distributers, but more like brands like banks and car companies. Someone in the audience talks about Sony and how they want to work with Metropolitan Opera as a way to promote their 4K offerings – from cinema to television sets.

“We have learned that we can raise awareness and make marketing with no money, working with 3rd parties and stillhave full auditoriums,” Atena shares.

Last question: Should we consider specific food and beverage for the intermission? Atena reveals that they get complaints if people buy and consume popcorn and nachos during a cultural event.

She stresses that each event should be taken separately and that what works for opera will not ork for sports and to always keep the end client in mind. “Bottom line is we can not have the same offering for all the events. We should think about making it more indivudual for everyone,” she concludes.

An audience member stresses the importance of using the intermission for data capture, with an example of a QR code on-screen in the intermission for the Sondheim event of Merilly We Roll Along. “It wouldn’t work for a Rieu event, but for this we also get drama studets and others prepared to use their smartphones.”

Atena reveals that with brand partners they start from scratch each time. “We would not do a sports event if we did not have Red  Bull on as a partner from the start.” And with that the session ends.

Talking to Atena afterwards she told me about a live theatre (stage) transmission event that they did, which is unique enough that I hope to write about it in a stad-alone piece in the near future. A very inspiring cinema and can-do spirit, as so often in emerging markets.