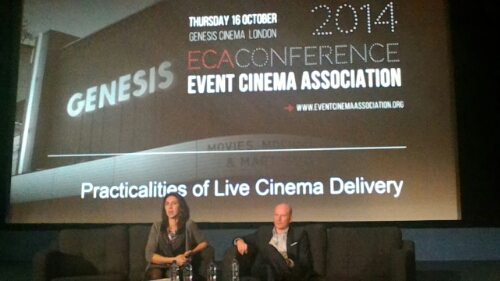 The afternoon break out session No. 1 looked at technical issues, such as delivery of live events to cinemas. Fabrice Testa of DSat gave a presentatio earlier over lunch (which they sponsored) of the company and its network 1,300 cinemas, showing 50 events and 400 hours of content last year. Isabelle Fauchet is the moderator.

The session structure will include a tour of the OB truck parked outside the Genesis cinema, with a live video link into the theatre. “We want to show you the sharp end of digital cinema,” were the opening words from Arqiva’s Nigel Crow and the OB truck that could be used for small and medium sized events. 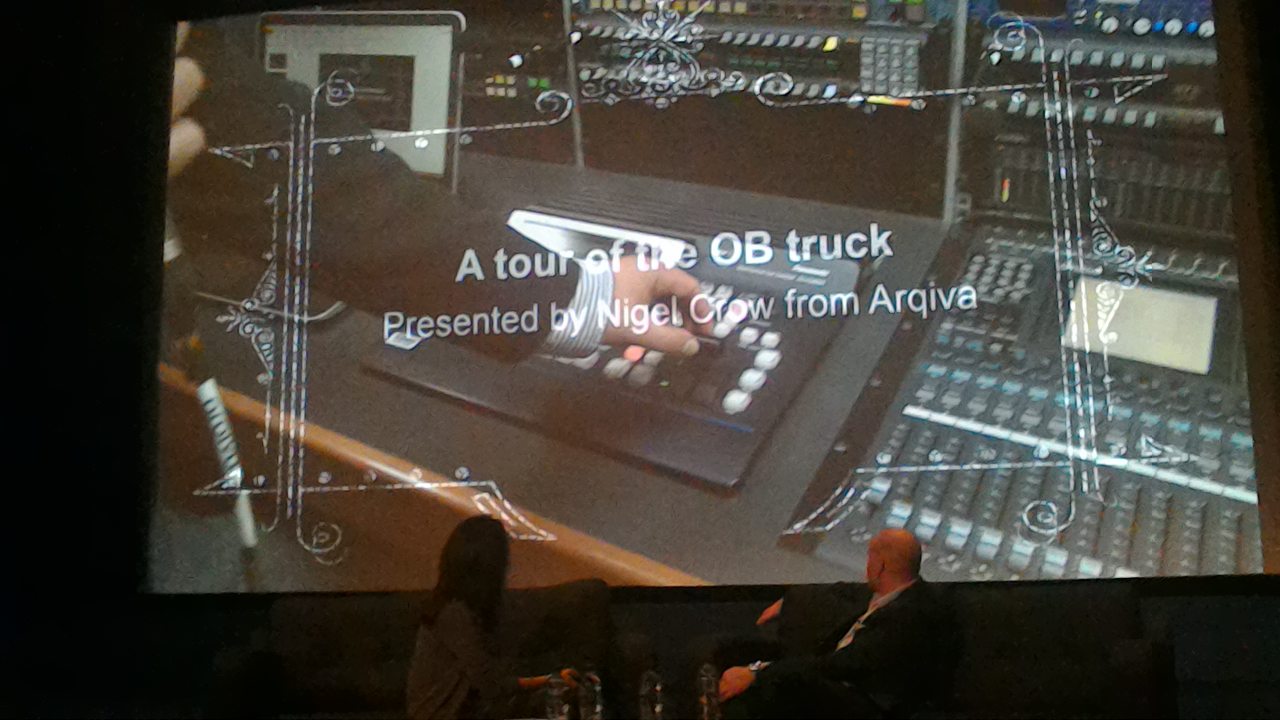 We got a walk-through of the equipment in the self-contained truck. Nigel talks the audience through the routing that the signal takes in reaching the cinema, having a choice of four different satlites (Thor 10-02, EUT 5WA, IS-905 and Galaxy 16), which can then pass on the signal via the Arqiva Winchester Teleport all the way via fibre to Hong Kong or Atlanta. It will be used for Manon from the Royal Opera House this evening. With that he signs off and prepared to come in and join Fabrice and Isabelle on the sofa.

“The most important component is the co-operation between the different partners in the live transmission event,” Testa stresses. The need to define the exact parameters, how the signal will be encoded for the video and sound, he continues is where the event stands or falls.

Isabelle stresses the need to communicate early once dates and times and places are confirmed to companies like Ariva, who can then pencil in the transponder capacity, which Nigel fully agrees with. “It doesn’t have to be set in stone, but the earlier you come to us, the better,” he says. They then talkabout the importance of testing earlier (ideally the day before) and to keep the same parameters as for the even itself, ie not changing frequencies etc. 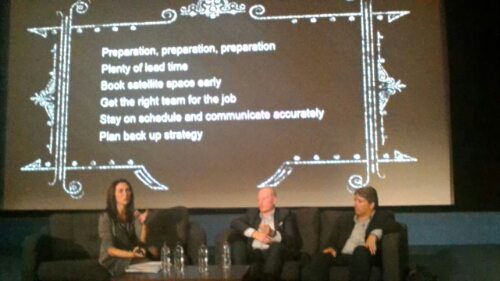 The other key components (as listed above) are then ticked off one by one. Nigel mentions how having a running order means that there is less panic, particularly when people think that something isn’t working, when in fact it hasn’t started yet. Also, “if you’ve not done it before, don’t go it alone,” Nigel says and Fabrice backs him up on the importance of tapping into existing expertise.

Isabelle opens up the floor to questions and commnts from the audience. The first speaker from Glyndbourn opera talks about the need for standard testing content and another issue of switching between pre-recorded content (such as advertising) and live. Fabrice says that there are test patterns and from tape rather than the OB truck as you cannt set it up for cost reasons. This handles issues such as testing for lip sync.

I raised the question about encryption and how to prevent piracy of signals in the clear. Nigel admits that only a small proportion of transmissions are encrypted (mainly ones such as boxing, where there are rights issues.). “This is not a function of transmission capabity but a function of receiving capability,” Nigel elaborates. Domestic receivers (used in many cinemas) can’t handle encryption and you are then restricted to professional receivers, which are in very few cinemas. This means that the only thing preventing piracy of event cinema transmissions in the clear is ignorance of the satellite and frequency of the transmission [and those can usually be found with a quick Google search]. An audience member from KenCast chimes in that they put in AES into the stream for their 3,000+ cinemas. 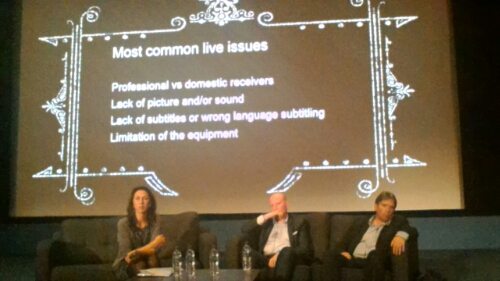 Isabelle asks what in their experience is the most common source of problems. Fabrice stresses the need for a hotline to support the live provider and also the exhibitors. “Moreover, with professional receivers we can have remote control, but with domestic receivers it is much more complicated and you have to resolve the problem on a case-by-case basis.” Isabelle asks if the hotlines are multi-lingual. “Ideally, yes,” says Testa. Kevn from Picturehouse says that it is “constant battle” to find the ‘exactly right piece of equipment’ in terms of receivers that are affordable and that work well. “Lack of subtitling is something that comes back a lot,” says Isabelle, where helpdesk comes into play as well.

Graham Spurling shares his experience of having every satellite dish and connection going (including antenna for local television), but that having multiple dishes isn’t always practical from a building planning permission. Another point about managed receivers versus cheap set-top boxes is made from Chris in the audience. “Please do call us during the transmission; don’t email us afterwards, because we can’t help you then.” They do 6-7 events per week and questions the need for re-testing to re-tuning equipment between each event, five-six years down the line.

FHP’s Rickard comments on that: “We are typically  those cinemas that use the STBs, but 99% of our technical support is done via a closed Facebook group, because that way the can quickly work out what is a local problem and what is a problam from the central feed.”

The issue of professional versus domestic receivers is the subject of another comment/question from the floor by someone who feels that for former should be favoured by exhibitors, but “in a way that is affordable.”

The session is running late, but Isabelle raises the issue of how many subtitle streams can be carried at the same time. [It looks like any of s will be able to do two break-out session, doe to the over-run. Shame, as the other streams also looked ineresting.] Isabelle then launches into lack of training and knowledge. I guess the organisers have given hope of a second session now.

We finish with Solutions and Best Practice – read about it below. 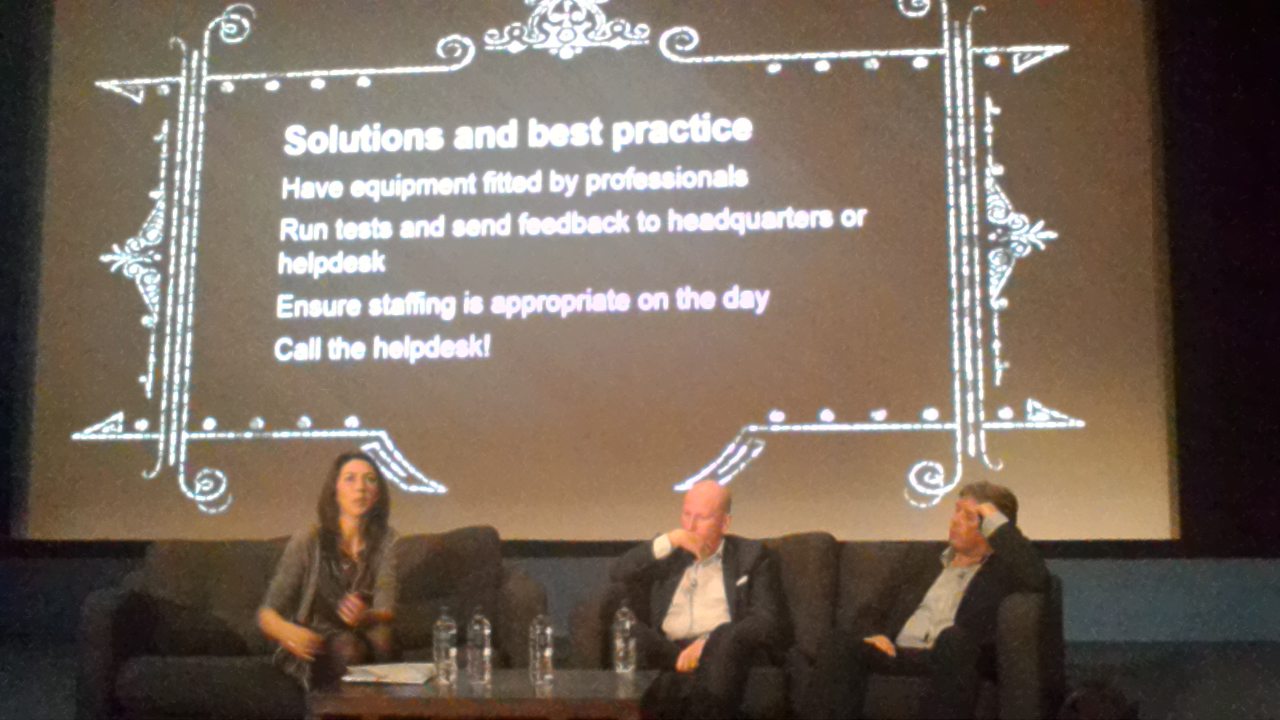