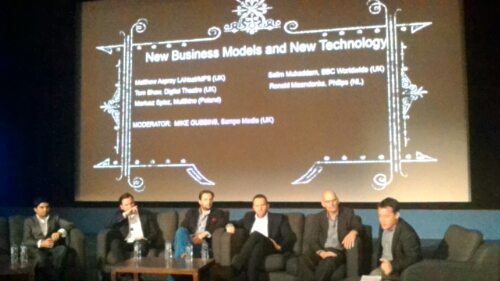 Micheal Gubbins of Sampo Media chairs the afternoon panel looking at new business models and new technology for event cinema. He begins with an anecdote about pensioners in his neighbourhood that book up entire opera seasons, go to every performance and all of them dressing up in their best operatic gear. Even the 90-year old gent.

Starting on the far end of the Salim Mukaddam, BBC Worldwide, who works on the music side on thing like the Westlife concert, in addition to Doctor Who and other content. Tom Shaw of Digital Theatre who captured some of the content we saw before the panel started (including flashing Philips lights0. The Matthew Aspray from LANsat/MPS. Thgen award winner Mariusz Spisz of Multikino in Poland (who I  just saw at the SAWA event in Berlin last weeks). And finally the Philips rep – Ronald Maandonks.

Micheal starts off with question to BBC WW about what it is with technology that now makes event cinema possible. Salim begins by stressing BBV WW’s television strength, being the biggest non-Hollywood studio television exporter. “Back in 2009 event cinema was possible and we were looking at things like Met Opera about how we can replicate things for things like the Proms. We split the world with By Experience in US and another company for Australia, New Zealand and South Africa.” Aparently the experience with By Experience was good [but what about the other one?] and they continued doing Last Night of the Proms with them.

They then continued the trials with Robbie Williams’ comback concert and Westlife, both of which were record breaking event cinema events. “It’s really about cost of taking it to the market. Prior to 2009 we would never have done it for the cost of taking such a film to cinema,” Salim states. “It is the move to digital that did it for us.”  The point is made about technology becoming’ invisible’ and now it is about the business model and the experience. Salim confrms that “the key for us is live, so if we can go briefly live over satelite makes it a ‘once in a lifetime’ experience,” as well as “cost effective ways of going live across the globe or near-live” rather than going out on DCPs.

The word then passes to Digital Theatre’s Tom Shaw, who launched the company in 2009 with a view of capturing theatre in a different way. Rather then beaming it out live, the idea was to capture it with multiple cameras in a live space and to make the capturing of that disapear, before submitting it to a full post-production process and sending it out.

They filmed a number of productions around the country with an eye to build a platform and library for people to download and watch productions they would otherwise not be able to see. They then built an education service of Digital Theatre Plus as an education tool for schools and universities.

“We came to dgital cinema last, with our last three to four shows,” Tom admits. “It’s about distributing it to the screen they prefer, whether it is the big screen, iPad or television,” he explains. They recognised that the big screen required a different approach, with the small HD cameras that might be good for the small screen not sufficiently good enough for the cinema screen.

Michael then asks about fixed-position cameras versus moving cameras for different types of content. Tom talks about “blending the film language with the theatre language is really important. It is not easy to get right and quite easy to get it wrong.” The last one they did was Ghost, which was a very static production (being Ibsen), “but it didn’t need anything fancy,” not least as it was a tripple Olivier winner. It was also the first theatrical performance captured and played back in Dolby Atmos – which would not have been possible with “live-live”.

MPS’s Matthew Aspray talks about the various digital cinema services that they offer for films/DCPs and event cinema. As Gubbins observes, “you are the people who call things ‘solutions’,” which Matt a little sheepishy aknowledges. Matt talks about the ‘on-demand’ concept “to facilitate choice” for exhibitors to program different events at different screens in the same cinema at the same time (a plug for their Jukebox solution advertised in the lobby).

Next up is Mariusz, who is asked about an overview of how poeple treat event cinema as opposed to regular cinema screenings. He reveals that the first event cinema was a football game between Real Madrid and the Krakow team, which was enabled by talking to the television people, “that was the beginning of our sport adventure. Then we thought, why not start with the music. I think U2 was the first band we put on the big screen,” tied in with a DVD launch of a U2 concert video. That was 10-12 years ago when U2 were still not touring in Poland. And this was all when cinemas were still analogue and we used DVDs, Mariusz stresses.

They then did opera, more pop and rock, including more and more live, while the cinema circuit grew from 10 to 30 sites. This meant that the need for a technical team grew. The next step was to use the internet on some events, including this Sunday when they will show an e-gaming final from South Korea with League of Legends playing in seven cinemas across Poland, “and kids will come and watch crazy Koreans play” Mariusz jokes.

Gubbins then asks Ronald Maandonks what Philips is trying to do in terms of the event cinema field, the room for enhancement of the experience in the cinea. Ronald says that more than 80% of cncerts use their lamps and that they see a clear difference between cinema and live concert and they are trying to bridge that by introducing LED bars, spot lighting, mood lights to blend with content on the screen. Ronald aknowledges the importance of sound for concerts (although Philips don’t sell speakers) and that it helps create a feeling of being part of a crowd at a music event. “The next step will be to tap the live effect with lights and to synchronise that, so that we get very close to the live performance.”

Gubbins talks about digitisation acting as an enabler but also the importance of scale. Asking Mariusz whether event cinema remains the ‘one offs’. Mariusz says that “film will remain the number one in the cinemas, at least in our lifetime.” But in his cinema event cinema is already 5% even though they won’t play anything non-filmy on the weekend, and thus missing out on many of the opera streams [like Met]. There have been times when there was 3 out of 8 screens were showing event cinema at the same time, “but our film booking department hates it.”  Though for One Direction they had three shows on Saturday and three shows on Sunday and are looking at more play slots.

Digital Theatre’s Tom Shaw talks about the three audiences they have: VoD, educational and cinema, “and they are different audiences, but we are looking for content that will attract all three audiences.” They have just film The Crucible with Richard Armitage, which helps create demand (when you have a big star). BBC WW’s Salim stresses that everything they do has to be of a high quality, “because that is what people expect from us.” This has an impact about what works for BBC WW commerically. “So while it works for a global brand like Doctor Who, whereas for smaller pop bands it is a bigger risk.” With Westlife they knew that even though it was a British/Irish focused ban, they had enough of a loyal fan base that would come out to the cinemas, buy the DVD  and watch it on TV. “But of course we would like to do nothing but work with the One Directions of this world.” Gubbins jokes that he would rather cut off his leg than work with One Direction.

The topic is then broached about the second screen (ie smartphones), which for events like sports and music, where noise is part of the interaction, could be a critical component in the future – even though they don’t work for silently consumer events like opera and thetre. Mariusz highlights apps such as Cinime, where people can vote and play as a companion to the big screen. Gubbins also raises the role of social media, which even for opera and theatre makes fans come together online through their shared interests. “Social media is absolutely vital,” for events like Westlife and Doctor Who, BBC WW’s Salim confirms.

The territorial rights issue is raised as a last point before they open to questions from the audience. “You’d think it would be really easy to put loads of concerts into cinemas,” says BBC’s Salim, “but the costs are simply astronomical and impractical in terms of clearing the rights with all the required authorities.” He aknowledges that they have come close to doing it on a global scale for the Glastonbury festival, but so far not been able.

Gubbins then summarises the three key technical components: the experiential, the reach (number of cinemas) and finally the community creating element around particlar brands or products.

Bill Gash from CSG gets to ask the first question, about the value of data and how you can legitiamately capture that as well as retail that. Mariusz talks about using their website, using their CRM to capture data. “We have seven million email adresses, but we know that only 10,000 of those will be interested in opera, so we are creating distinct databases for different interest groups.” Meanwhile Salim says that “Facebook, Twitter and Instagram don’t work for us”, but we have access to big brands that reach out into those brands.

Mike from Picturehouse asks about monatizing games on the big screen, whether they sell tickets or mke money from concessions and footfall. Mariusz points to Champions League and that they always works towards being able to charge an entrance fee, as well as having sponsorship and concessions – so a tripple play. The same is true for gaming.

Third questions comes from woman who doesn’t introduce herself (her company is Cinergy) who asks about the long tail business model of opportunities in communities after the cinema window for content. Gubbins agrees that this is an interesitng point about lots of other places and opportunities. BBC WW Salim confirms that there is lots of non-theatrical markets for them, such as airlines and crise ships, so they are looking at it.  Digital Theatre’s Tom Shaw there is a lot of confusion and unclarity about non-theatrical rights, “but the long tail is what it is all about, particularly online.”

With that the panel breaks for tea. “There is the possiblity of new models along the scarcity of tickets models and lots of different content that can go into that social setting; and business models are being built where there is a meting of demand and technology. Exciting times,” are Gubbin’s concluding words.