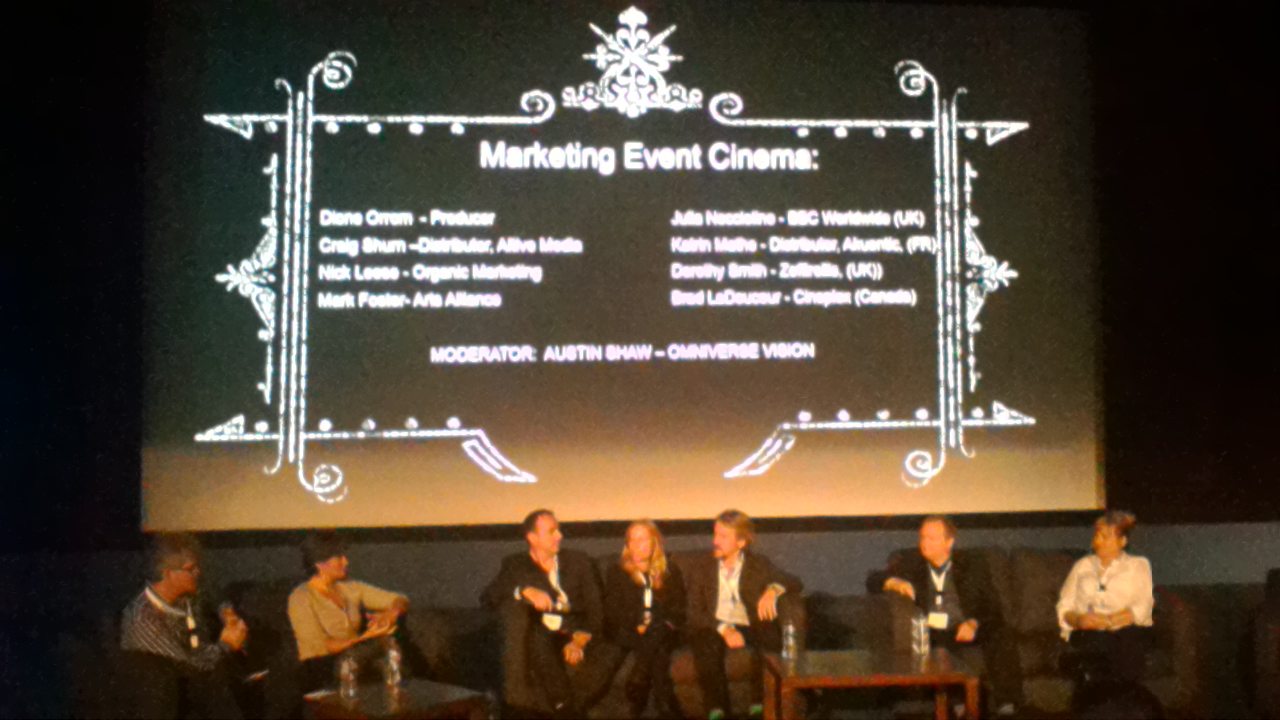 The first panel of the conference is a ‘big sofas’ discussion on the major and challenging topic of marketing event cinema, with a panel of truly leading industry expert. Each sofa sitter introduces him/herself  and provides a background to their company. There seems to b a friedly competition as to who has the longest experience in the field, with Cineplex’s Brad LaDouceur probably winning with the PPV wrestling events from WWF in the lat 90s in Canada.

The discussion kicks if with moderator Austin Shaw (Omniverse) highlighting the value chain, pointing to films having a long value chain of exploitation rights, but this is simply not the case with event cinema. “We’ve talked about some great success, but there have also been turkeys along the was,” so the question is how to make every event a success at every level, thus maximising returns for everyone involved. Given the limited marketing budgets, there is thus an imperative to grow the market together.

Producer Dione Orrom gets the word first, and she points to personal experience of living outside London and the frustration of meeting people who had not heard of NT Live (“Friends say, ‘I didn’t know that was happening'”) and school classes seem ignorant of things such as Matisse Live. “There is less time for awareness to percolate” for event cinema.

Next Austin points to the trio on the ‘distribution couch’. Craig from Altive Media says that they try to emulate film distribution, saying they have an average of GBP 60 to spend per cinema venue for posters, post cards, tralers, etc.. This is little, “but when Bon Jovi was done there was NOTHING spent per cinema. If they were lucky they got a PDF to print.”

BBC Worldwide’s Julia Nocciolino talks about building brands and communities around those brands, with ‘activations’ in the run-up to the 50th anniversary of the Doctor Who event. “Innovating, creating unique experiences, which gets you attention in the press and that gets it out to a wider audience.”

Arts Alliance’s Mark Foster contridicts Craig and states that “we are NOT trying to replicate the movie distribution model.” He talks about engaging with schools, “since Shakepeare is always on the curriculum.”  (AAM has the rights to The Globe theatre).

Next up is the exhibition sofa with Cinepex having 160 locations, while Dorothy from Zeffirellis has five venues, so representing the full spectrum of exhibition. Brad talks about using the membership list and database in terms of targeting their guest with offers. If they have watches Grand Budapest Hotel it makes them likely to be targeted for an opera event. “Cinema is tough; we rely on global advertising, but local theatre managers are key,” Brad affirms. “Toronto, Montreal, Vancouver, the engagement is there aleady, but it is the smaller hamlets that are the challenges.”

This is echoed by Zaffirellis’ Dorothy Smith about the importance of face-to-face, “because they are an older generation and very culturally minded. They have been down to London and attended stage performances. So even if they can’t go there any more, they still appreciate the personal touch.” She also notes that even older patrons have email, so this is an excellent way to reach them with a flash mail-out.

She also whole heartedlyagees about older patrons having previously abandoned cinemas and that event cinema brings those audiences back again and is what helped make film such as Grand Budapest Hotel such a big hit from there.

The final sofa is marketing and PR. Nich Leese from Organic Marketing talks about marketing The Globe for Arts Alliance Media. “Reaching the amateur dramatics group leader in Tunbridge Wells brings them close to their members through promotion or information to draw in their communities,” Nick says, pointing to a combination of PUSH and PULL to create an individual relation with the customers. “They make a destination relationship, rather than a product elationship,” in audiences deciding to attend event cinema. That also involves a large degree of helping cinemas to build the expertise to reach out to the grass roots.

Katrin Mathe from Akuentic talks about the importnce of analysing the potential for each event before tailoring the campaign for different types of cinemas, whether it is multiplexes or art-house cinemas. They event arrange work shops with the director to bring in cinema managers and “create synergies and hoe they can communicate. You also have to involve brands, such as Disney, with whom they built an entire weekend. Nintendo was anther one for karaoke in cinemas.”

Austin jumps back to the first sofa about how to get theright material out to market and promote events. “So much of it will come down to who the artist is, with 1D and Take That having huge built in audiences. They are the ‘no brainers'” says Dione. AAM’s Mark affirms that “you have to introdice new assets, so that you keep the conversation fresh with the customers” in terms of the marketing material. He also says there is no better marketing than word-of-mouth.

BBC WW’s Julia Nocciolino says that there is often not appreciation about what is valuable, in terms of what gets put out for marketing purposes. She talks about the 12 days world tour of the new stars of Doctor Who (Peter Capaldi and Jenna Coleman) and the social meida buzz bult around it, much of which was a success because it was handed to the fans. She also says the access to the costum designer of Peter Capaldi’s new Doctor Who suit was as much of a success as access to Peter Capaldi himself. “It is the behind the scenes access that is often the key.”

Setup, time & engagements – the three key ingredients according to Omniverse’s Shaw. Cineplex’s Brad says that keeping ticketing to three weeks window instead of eight weeks actually creates more fresh engagement, even as they build awarness over a longer time period. So the ticket sales launch becomes an event in itself – “the tickets go on sale Friday night and the key is to have all theatre managers  informed.”

Zaffirellis’ Dorothy says that being in small cinemas in not a disadvantage, and “one of the reasons it has been a success for us is because we pre-sell tickets for event cinema, which we don’t do for films and that creates an expectation that ‘we don’t want to miss out.” Putting up posters is a big thing they have found as well, with some poster sites better than others. Event cinema pods get moved around. Brad also confirms that Cineplex moves the posters around and there is fights within their own company about where and how to priority which posters. Cinepelx uses everything from urinals to bus shelters to promote their events.

Asked about the most effective piece of marketing in the last 12 months, Nick says “you have to take everything on a case-by-case basis, depending on the contant.” Pressed he says the one he enjoyed most peronally was the shout-out they did for Robbie Williams with the best tweet hashtagged from a cine,a getting an on-stage shout-out from the artist. That created “an interesting social event.”

Austin then says that this highlights why this is no longer ‘alternatice content’, or, quoting Rickard Gramfors, the even more disliked old term “ODS – other digital stuff” (courtesy NATO’s Fithian).

Brad affirms that the campaign starts with the artist: “the moment we announce Of Mice & Men, James Franco is tweeting about it.” While when Stephen Fry was asked about print advertising for his book readig beamed into cinemas he says, “I’ve got seven million followers on Twitter, so why would I need to take out an advert in The Telegraph?”

Organic Marketing’s Nick talks about the importance of having a local partner for marketing in each territory, “because you can’t have gobal expertise about every single country.” Omniverse’s Austin in turn asks about problems in fragmented markets like Norway and Germany. Craig from Altive Media suggests going thrugh sub-distributors, even if that cuts into the profit margin.

Akuentic’s Katrin says that they personalise press releases for each cinema, which then gets into the cinema and press in each local town. Zaffirellis’ Dorothy Smith talks about knowing your local audience  and what works for them. “Robbie Williams didn’t do as well for us as War Horse did, for example.”

AAM’s Mark Foster says that event cinema is a good and positive story that should be promoted by the ECA in financial papers and mainstream press. “We should be making loud noises that we are breaking records every few months.” Austin shouts out to a represntative from Picturehouse in the audience, who confirms that event cinema now account for 20% of their turnover. Austin talks about the role of ECA recruiting local champions.

The session opens to questions from the audience and Jeremy from DCM asks about involving brands. Akuentic’s Katrin talks about the work they have done with brands like Nintendo, while BBC WW’s talks in more general terms, but there are challenges in terms of brand relationships Nick from Organic Marketing highlights and it is for example often not possible to extend the brand relationship someone like the Royal Opera House has into cinema as well.