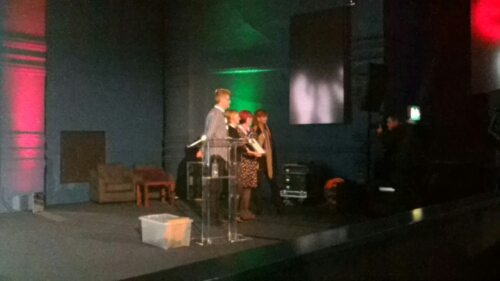 It is time to hand out the Bronze, Silver and Gold awards for event cinema, which is for 100K, 250K and 500K admittance to any event cinema event. This is to help cast a light on the success of events in cinemas. The second category of awards is excellence awards, voted on by the members of the ECA. Sponsor is Rentrak.

The first Gold award goes to BBC WorldWide for the Doctor Who 50th Anniversary – Day of the Doctor, for getting more than 500,000 admissions this year. No silver, but five Bronze awards: Arts Alliance for The Nutcracker. Nobody from Arts Alliance is here to collect the award, but nobody is here from AAM to collect it. which is a shame, because they also win the next two prizes. The last two bornzes go to Omniverse for Muse and More2Screen for Pompeii, both of which got more than 100,000 admissions.

Mark Allen, Picturehouse picks up first excellence award and the second goes to Graham Spurling for Movies@. Final exhibition award goes to Mark from National Amusements. He is also not here to collect. “It is a bit like the Indian films awards” our host quips.

The first Excellence in Programming Award goes to The British Museum for Pompeii Live. Then Omniverse gets one for Keane and the final one is for Nexo for the live Cannonization. Caspar from AAM appears and runs down and collects his stack of awards, slightly out of breath.

Phil begun by saying that he was happy to be hear, “in fact anyone who produces film knows that they are happy to be anywhere.” He then showed a clip from The Rumble in the Jungle to illustrate the point about how event cinema is more than 40 years old.

Then an annecdote about ‘Phedera’, which was NT Live’s first production, but one of his cinema contacts said, “why would I want to show a tennis player in cinema?”. He reels off the list of event cinema listings for this month – which is impressive – and says that this is where the things that used to be interesting on television can now be found. “I am your audience. If I didn’t spend so much time raising money for films, I would watch them all, so thank you to all of you for making these films.”

He then ends by thanking Melissa and the ECA. He concludes and Melissa comes on to echo his words. A final word of thank you to all of ECA’s partners.

And with that we wrap for drinks, after a long but productive day.