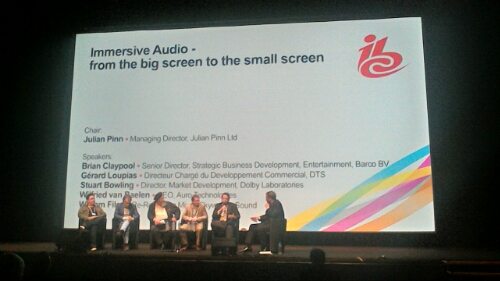 Julian Pinn (Julian Pinn Ltd.) says the industry in embracing immersive audio at a fast rate, at least if compared to the uptake of digital audio in cinemas in the 1990s. He invites the panel to stage in turn and opens up the session. No powerpoints. Instead Julian promises to be a ‘fair’ moderator and give each speaker his turn. (The balance between Atmos, Auro and DTS is fair, in terms of time, though Skywalker Sound is given the most time.)

“There is a real hunger that people are prepared to pay for a premium cinema experience,” which includes better audio, says Pinn as he kicks off the panelists’ five minute each.

Brian Claypool (Barco BV) says Barco is not known for audio, but once digital cinema projector deployments were well underway they asked cinemas what was next. Atmos and other Barco initiatives (Escape et al) is what the result of that feedback was. “We don’t want to re-invent the wheel, we want to create something tangible of value to exhibitors,”  says Claypool of Auro. “We need to keep the interest of cinema at the forefront of what we do. Not many people have Barco projectors in the home.” [Do I etect tension with Auro in the home?] Stresses importance of unified workflow.

Stuart Bowling (Dolby Laboratories) stresses that “audio is our background and we had different approach” to immersive audio. “5.1 is not enough. Creatively the movie makers we spoke to felt it was holding them back.” He goes on an elaborates, “With digital cinema we had greater bandwidth and uncompressed audio, which gave greater potential. We had to create tool sets, we had to create new ecosystem.” The starting point was with a ProTool plug-in and worked with mixers.

Gerard Loupias (DTS) – Pinn asks if DTS didn’t exit cinemas and why is it getting back in? Loupias says “we want to do immersive audio without restrictions and by ‘restrictions’ we mean costs. This is why DTS is offering an ‘open’ format.” He says if a cinema has 20 screens it cannot afford to make them all immersive because of the cost. Points out that all of them on the panel “love sound”. Says that Auro and Atmos “are the same idea.” Emphasizes that this is aso an issue for broadcast and the home. Says that their tools are available from the likes of Fairlight.

Willfried van Baelen (Auro Technologies)  says that 5.1 audio is immersive in a way, then progressed to 9.1 audio. “There was so much confusion that we started to call the workshop for 9.1 – ‘Surround Sound with Height.'” In 2010 in Tokyo we called it ‘immersive sound’. He tried panning audio between heights and it wasn’t working as well as horizontally. This led him to explore the ‘colour of sound’ in terms of re-creating a natural sound. “We need three levels or audio: first is ear-level for when car or bike is passing by, then the vertical stereo field is most important (not overhead – which can sound un-natural), with over-head less imprtant because we hear less reflected sound from above.”

William Files (Skywalker Sound) says “immersive auio is not just exciting for me (as a sound mixer) but also for my directing clints.” “You can manipulate an audience with sound in a way that you can’t do visually. What I’m excited about is higher fidelity, so you don’t have the muffled sound you get with 5.1 audio.
The final piece of the puzzle for me is the fidelity. Files mixed Dawn of the Planet of the Apes, with clips played for the audience. “There is no additional time budget for the mix just because it was Atmos. We anticipate to do it for Atmos and Auro, but Fox only decided on Atmos, 7.1 and 5.1,” Files explains. “This was one of last Fox titles that went out on 35mm print, with 300-odd prints using LCRS audio,” he also confirms.

In the first clip, rather than just having rain sound from above, they had rain falling onto over a dozen objects around the apes. This made it more immersive than just having a shower above. Music is anchored on screen, but left and right are pulled slightly into first 1/3 of auditorium. Choir is even more off the screen. This boh widens and tightens the sound, Files notes before showing the apes forrest hunting sequence. In the next clip (‘Avenge Ceasar’) Files notes that the instruction he received was that everything should always be in motion and the director said that the mix should ‘hug the audience’.

The first question from the audience is does the audio adress the subconscience? Files agress, says that you stop thinking about the speakers in the room. He then talks about loudness levels and the risk of government regulation.

Next question is whether Dolby Atmos over-emphasizes overhead speakers. Bowling replies that overheads was filling a gap and the primary work was about object placement in audio. Claypool says the issue of loudness is going to make or kill the whole area of immersive audio. Points out in Belgium there is already laws about loudess levels. Pinn jumps in and states that it is also an issue of educating mixers and the industry on how to use the dynamic range.

I asked whether launching virtual immersive audio in the home (both Atmos and Auro) risks diluting the immersive audio ‘brand’ before it has taken hold in and been experienced by enough people in cinemas. Both Wilfried and Bowling emphasized the pre-eminence of cinema and that a lot of thought had gone into replicating he experience in the home. “When we take a technology beyond cinema we don’t take it lightly. Cinema is the reference,” Bowling confirmed.

Making dialogue sound better through a clearer mix is an unexpected side effect of immersive audio, says Skywalker Sound’s Filed. And that was the end of the immersive audio session. That evening Dawn of the Planet of the Apes was shown in full in Dolby Atmos (and full brightness 3D) with me and the rest of the audience very impressed.