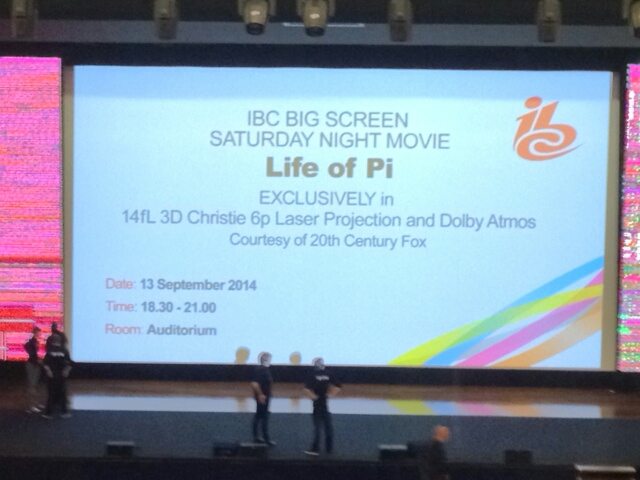 The IBC movie night screenings have always been an opportunity to showcase the latest advances in big screen technology, while also giving IBC attendees a bit of blockbuster fun. This year was a technology world first that made a big impression on everyone attending.

Thanks to tremendous support from IBC’s technology, integration and content partners, we were treated to a 3D presentation of an unsurprassed quality. Thanks to the use of Christie’s new 6P laser-illuminated projector, over 40 speakers from QSC, Dolby Atmos immersive audio and a DCP of 20th Century Fox’s multi-Oscar winning ‘Life of Pi’ graded especially for 14 footlamberts (ftL) 3D brightness, projected onto a 1.0 gain matt screen, it showcased something that no public audience had yet seen before, as IBC Big Screen Experience producer Julian Pinn explained on stage.

Two years ago Christie first showa ased its laser projectors at IBC with a secial screening of ‘Hugo’, but that was off a silver screen with an 1.8 gain. Back then there was no immersive audio (either Atmos or Auro), so this presentation raised the bar in several regards. While not new, the film was an excellent choice, not least given that it had won Academy Awards for best Cinematography, Visual Effects and Music.

Watching it I was not so much immediately struck by the brightness but by the colours, details and clarity. It is a cliche to talk about ‘looking through a window’ but that is what it felt like as the camera panned through the Pondicherry zoo over the opening credits. Yes, it was bright as you would expect a sunny day in southern India to be, but the brightness felt natural. But brightness is only something that you consciously appreciate when it is not there – as will be the case with future 3D films I watch in regular cinemas.

The audio was equally impressive, not least because of a terrific mix that was as nuanced in the stormy sea scenes with the ship sinking as the quieter moments that picked out individual sounds of animals. The combines effect was such that almost nobody in the audience (who filled the big RAI Auditorium) got up to leave once the film had started. For a Saturday night in Amsterdam, that is truly impressive.

Afterwards a small group of us were taken upstairs to the projection booth. Two years ago for ‘Hugo’ the Christie laser was a beast of a machine with water cooling to keep the critical components from melting. This year the laser engine was not only air cooled but were housed in a separate unti outside the projection room. From there they were connected by 15 meters of fibreoptic cables to the projectors themselves. What was remarkable is that they were achieving maximum brightness without even running at close to full capacity.

There is no question that this is the future of 3D projection and I will bemoan having to watch a typical 3D presentation at the more usual 3-4ftL in commercial cinemas. The colours will be duller, the detail will be lacking, the clarity will suffer and the ‘wow’ will not be there.

At least those of us at IBC still have both Doug Trumbull’s UFOTOG and Fox’s ‘Rise of the Planet of the Apes’ to look forward to with the Christie laser and Dolby Atmos.