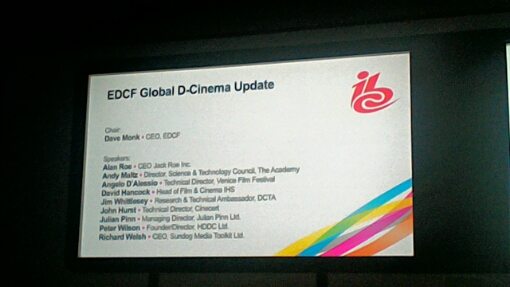 The EDCF annual IBC gathering is a smorgasbord of information about the latest developments in the digital cinema industry. More speakers than time, so without further ado, Dave Monk kicks it off handing over to the first speaker.

David Hancock (IHS) – “9 1/2 years I’ve been doing this slide,” Hancock said, “and in 12-18 months there won’t be the grey bar any more because analogue will be gone.” There are still a handful of territores where there is analogue (Turkey, Baltic States, Latin America). “Technlogy is now the currency driving cinema,” and that’s what he is focusing on today. Hard drives dominate still, even though some territories like Fance it only accounts for 1/3. But that’s all set to change. Most of the focus for DCP delivery today is on broadband, but that and satellite co-exist.

Ymagis takeovers of dcinex and Smartjog has created one major entity. That’s the biggest change in the last year. “The market is concentrating down to a few players,” such as Deluxe, Unique and Ymagis. “But as an exhibitor, how many suppliers do you want i your site?” Some countries have just one supplier for all sites.

Laser projection – some consumers cite lack of brightness as reason for not going to see 3D. It has not been proven to work, “but what we have now is the first generaton and not what it will be shipped to cinemas.” IHS predicts 100-200 this year and 400-500 in 2015, but mainly smaller projectors. “Laser is inectricably linked to the replacemnt [cycle] of the first generation of digital cinea projector.” Business model is needed for replacement machinery – there is no VPF for laser replacement, Hancock highlights.

Audio – “Recently the sector has re-discovered competition after a decade of lack of competition.” 1,500 screens equipped with Atmos or Auro by the end of 2014. But there is now focus on the home evironment, as well as markets such as automotive (cars). Where does it all lead, ancock asks. Premium cinema, particularly large format, is the answere Hancock notes. “Technology pushes the premium experience,” he observes. 1.,401 PLF screens 1h 2014 with IMAX capturing 45%. Conclusion: may you live in interesting times.

There is a tension between technology and cinema. “The cycle of technology does not match the technology of cinema.” Last observation particularly interesting: “physical decline [DVD etc.] ups cinema in Europe: the value chain increasingly underpinned by cinema.”

John Hurst (Cinecert) – First slide asks ‘Is Ten Years Too Long’ but his topic is the state of [digital cinema] equipment in the field. It looks like cinemas here in Europe are better maintained than cinemas in US in temrs of receiving SMPTE DCPs. You have to keep your software up to daye in your digital cinema server to take advantage of all new features – not just bells-and-whistles ad-ons.

He then calls Rich Philips from Arts Alliance (AAM) up to stage. AAM have spun off most of their digital cinema business, but they still have the digital cinema software technology. The message from Richard is that verisoning is not too bad in Eurpe, but that education is an issue, with most exhibitors clueless that there is another hurdle that needs to be jumped through. “That’s all I have to sya really.”

Chris Witham (Disney) is then called to stage by Hurst. He jams through it in two minutes. “For people to keep coming back to cinemas, we have to offer the best experience possible.” He then discusses Disney’s transition plan to SMPE DCPs with 2015 the target date.

Andy Maltz (AMPAS/Academy Scient and Techonlogy Council) topic was Next Generation Technology Overview. “Digital projection was ‘just’ a step in the evolution of cinema,” pointing out technologies that came before and after like VFX, digital audio and motion/performance capture. Academy’s work is currently focused on enabling the evolution of motion pictures technology in support of advancing the art form.

More specifically: next generation production standards, a “systems approach” to expanding the creative palette, while also ensuring the long term preservation of digitally created motion pictures (“though I won’t bore you any more with the Digital Dilemma today,” he joked). They also came up with the iPad app called Academy Color Predictor.

Then comes the big push to create standards around ACES. After Earth, Oblivion, Elysium are some of the films that used ACES. ACES even won an Emmy Award in 2012. [I won’t go into all the ACES components that Andy lists.] ACES Version 1.0 scheduled to ship to Production Prtners this fall (“though you could argu that we are already on version 3.0”). Next-Generation Cinema Technology Project by AMPAS takes a systems view. Objective is to ‘foster advances in cinema technology to broaden the creative palette.’ They do it by surveying advances in cinema technology, shoot test material and engage with film makers.

“The Affair” was one such test, four scenes, 35 takes – 24 fps to 120 fps, with several shutter angles, 2K and 4K. 14 stop and 20 stop ‘scinence project’ camera. Tey even shot ‘impossible’ frame rates sych as 38fps and 42fps, “because we know that there is a human frame rate threshold about what looks ‘cinematic'”. One learning was that “not all gear works at high frame rates – though we won’t be naming names” about whose gear didn’t hold up.

Peter Wilson (HDDC) covers lots of bases in his talk: sharpness,  contrast ratio/HDR, gradation, measuring brightness & contrast (the actual title of his talk), points of measurement, places of measurement, digital test tools, Harkness and Highland Technologies QALIF (all of which were too detailed to do justice in this hurried note taking). He then says Matt Cowan is the man for any SMPTE brightness issues.

Jim Whittlesey (DCTA) “I hear John Hurst wants to kill the naming conventin – I suggest you get silver bullets or wooden stake.” He then turns to KDM delivery – “Is there a simple solution? No. That’s it, time for questions.” He says that digital cinema roll-out went faster and smoother than anyone expected, “but we are not done.” Today Deluxe, MPS and Techniclor deliver 10’s millions of KDMs per year over emil. (@Jrry pierce recently called me an email spammer,@ he jokes).
He outlines: Need for automated KDM delivery system. In an idea wrld there would only be one automated KDM delivery methoe (“but that ship sailed a long time ago.”) Must provide confirmation of KDM delivery (Return recipt). Robust error handling No human beings – all computer to computer. Jean-Francois Nivert interjects “and of course it must be free,” to ,uch laughter. “Well that’s obvious,” says Jim, pointing out that this is the Hollywood studios we are talking about. Is this a project for EDCF? is the question Jim finishes the talk with.

Julian Pinn (Julian Pinn Ltd.)  talks on digital cinema advertising – a TMS certification programme. Discusses his post-Dolby consulting work for Weischer Media in Germany and Switzerland. They brand it ‘Cinema.Reloaded(R)’ The idea is Re-Inventing Cinema. Constantly. Vision is to take onboard factors such as weather, age-range, spending power, The idea is to deliver maximum flexibility, security and transparence . Required integration between back office (CineDavis’ OneDCM for Weischr in Dresden) and screen management systems and TMS, but what software version and APIs are all questions that require formalisation.

The idea is for the branding to be like the television sets labelled “HD Ready” even when there wasn’t HD content. John Hurst asks whether the certification requires SMPTE DCP interoperability? Julian: No. Someone else asks why Julian’s client charges 200 euros to check each advertising DCP. Julian refers to sheer number of ads that circulates each day.

Angelo D’Alessio (Venice Film Festival) promises to take no more than two-three minutes. His message is that not all DCPs are equal, which is why he is responsible for the upcoming EDCF Guide for Film Festivals in the Digital Age – Theatrical solutions in the digital age. The guide is destillaton of customs and practices from the major and minor film festivals of Europe.

The Real [but no longer reel, Ed.] situation at the festivals is that each festival has experiencesd a sudden influx of questions and a sudden influx of non compliant DCP’s, KDM’s and SP’s. He then talks about a famous film director at a festival who asked to see his DCP and then asked to change the gamma and several other things about the film. Angelo’s message is: zero tolerance for bad behaviour.  Of 300 DCPs in Venice last year only 3 were SMPTE DCPs.

Richard Welsh (Sundog Media Toolkit). Promises to do an explanation of ‘cloud’ in 60 seconds. Manages it in 58 seconds. [His presentation is so good that words cannot do it justice. Seriously.]  The rest of his talk on cloud and security is informative and entertaining. Again hard to do justice in this article. Excellent primer on security. Talks about encoding effort of DC versioning – 160 versions: 2D, 3D, Dolby Atmos, and how adopting SMPTE DCP removes a big part of 3D subtitling crunch.

Cinema networks are a new cost centre for cinemas, where functionality is not enoughand security is paramount. PA-DSS & PCI-DSS compliancy (to do with credit card security), seen as nuisance as it requires more work, but can put you out of business as a cinema if it goes wrong. “Cost of breachcould un into millions of euros per location.” Difficulties of wifi wih credit cards. He ends by highlighting that speed of IT development is very, very rapid. Faster than ever before. Where now/next? Digitisation: first mimic, then change. Thinking digitally: assign films to auditorius. Big data: drive custom offers to custom segments.

Peter Wilson (HDDC) comes back on stage to talk about European Plugfest. [By now the jetlagged US delegates are nodding off while thers drift off and the rest start thinking about the post-EDCF drinks.] Wilson elaborates what is different in Europe, such as alternative frame rates, colors (different in France for subtitles), special characters/umlauts. EDCF needs financing/funding partners, a fascility (Munich?), create a professional “test-plan”. ETSI and UNIC support is sought. Come and talk to John Graham, Peter Wilson or Tammo afterwards.

Antoine Verraine (France) is asked to stage to wrap up the session. He talks about the decision to move the EDCF session from Tuesday to Sunday. It doesn’t seem to have hurt attendance. Echos the ‘may you live in interesting times’ saying that Hancock brought up. Emphasizes need for training and ‘see you next year.’ Monk gives thanks to the AV and PA people.

And with that we break for drinks. CJ will be back tomorrow reporting from Doug Trumbull’s keynote and UFOTOG screening, immersive audio and laser projection and more at IBC Big Screen.